The 2021 Ford F-150 has officially arrived, ushering in the 14th generation of America's bestselling pickup. This redesign integrates key elements of the previous-generation truck, including its extensive use of aluminum body panels, with new tech, some impressive productivity upgrades and a revised powertrain lineup that is anchored by a full hybrid said to produce class-leading horsepower and torque.

"Since 1948, our hardworking F-Series customers have trusted Ford to help them get the job done," said Chief Operating Officer Jim Farley in Ford's official announcement. "F-150 is our flagship, it’s 100 percent assembled in America, and we hold ourselves to the highest standard to make sure our customers can get the job done and continue to make a difference in their communities."

The new F-150 gets a new look, a new interior, and several new features that will make everyday life, outdoor activities, and job-site duties easier. Let's dive right in.

Like the previous-generation truck, the 2021 Ford F-150 will be offered with six powerplants — but not the same six that were available on the outgoing truck. While several of the options carry over on paper, the makeup of the new F-150's powertrain offerings differs pretty significantly in a few key instances. Note that Ford has not yet provided horsepower or torque for any of these engine options, but most will likely be similar to their outgoing equivalents.

We'll start at the bottom. The 3.3-liter, naturally aspirated V6 returns as the base engine. It made 290 horsepower in the 2020 model, and that figure will probably be similar for 2021. The same goes for the 2.7-liter, turbocharged "EcoBoost" V6 offered as the next step up, which produced 325 horsepower in the outgoing truck.

Also returning are the 5.0-liter "Coyote" V8, which made 395 horsepower and 400 pound-feet of torque in the 2020 (we expect a slight bump for '21), and the 3.0-liter PowerStroke diesel; the latter will likely carry on essentially unchanged.

After this, things start to diverge. The 3.5L EcoBoost returns, but unlike the previous iteration, it will initially be offered in just one state of tune. Previously, it came in 375- and 450-horsepower variants, with the latter reserved for the Raptor and high-end Limited models. For 2021, we'll get only one of those initially. Ford has not yet shared anything regarding its plans for the new Raptor (though its existence has been confirmed), but given the imminent arrival of the Hellcat-powered Ram TRX, we suspect Ford might have big plans for the next generation of its performance pickup.

Then, there's the new F-150's pièce de résistance: The PowerBoost hybrid. Based on the 3.5-liter EcoBoost V6 and a specially calibrated variant of the 10-speed automatic, this is going to be the range-topping powertrain for the 2021 model.

It's from this hybrid system that we're to expect the class-leading power and torque about which Ford has been boasting. While exact figures have not been released, we can comfortably say that the PowerBoost model will produce at least 420 horsepower and 480 pound-feet of torque; the former is the power output of the 6.2-liter V8 in the Chevrolet Silverado and GMC Sierra; the latter is the torque output of the 3.0-liter EcoDiesel offered in the Ram 1500.

Yes, the 2021 Ford F-150 gets a new look, but as with the powertrain offerings, there's plenty here that carries over from the 2020 model. The new F-150's dimensions are fairly similar (differing by just tenths of an inch in most key measurements, including track width and wheelbase), but Ford had its designers go over the exterior inch-by-inch, and while the overall shape will be instantly recognizable to truck spotters, the finer details have changed quite a bit.

Up front, the 2021 gets more intricate bumper and hood stampings, with more detail in the fog light surrounds and bumper covers. As we teased at the top of this section, the 2021 F-150 will have 11 grille variants, all of which are flanked by headlights in what Ford calls its new "C-clamp" signature pattern.

Along the flanks, the new F-150 gets slightly less-pronounced fender arch treatments and a more chiseled look to the character line running along the lower doors and bedsides. The tailgate designs — which will likely be nearly as numerous as the grille offerings — take on a look that effectively inverts the outgoing models' X-shaped stamping. 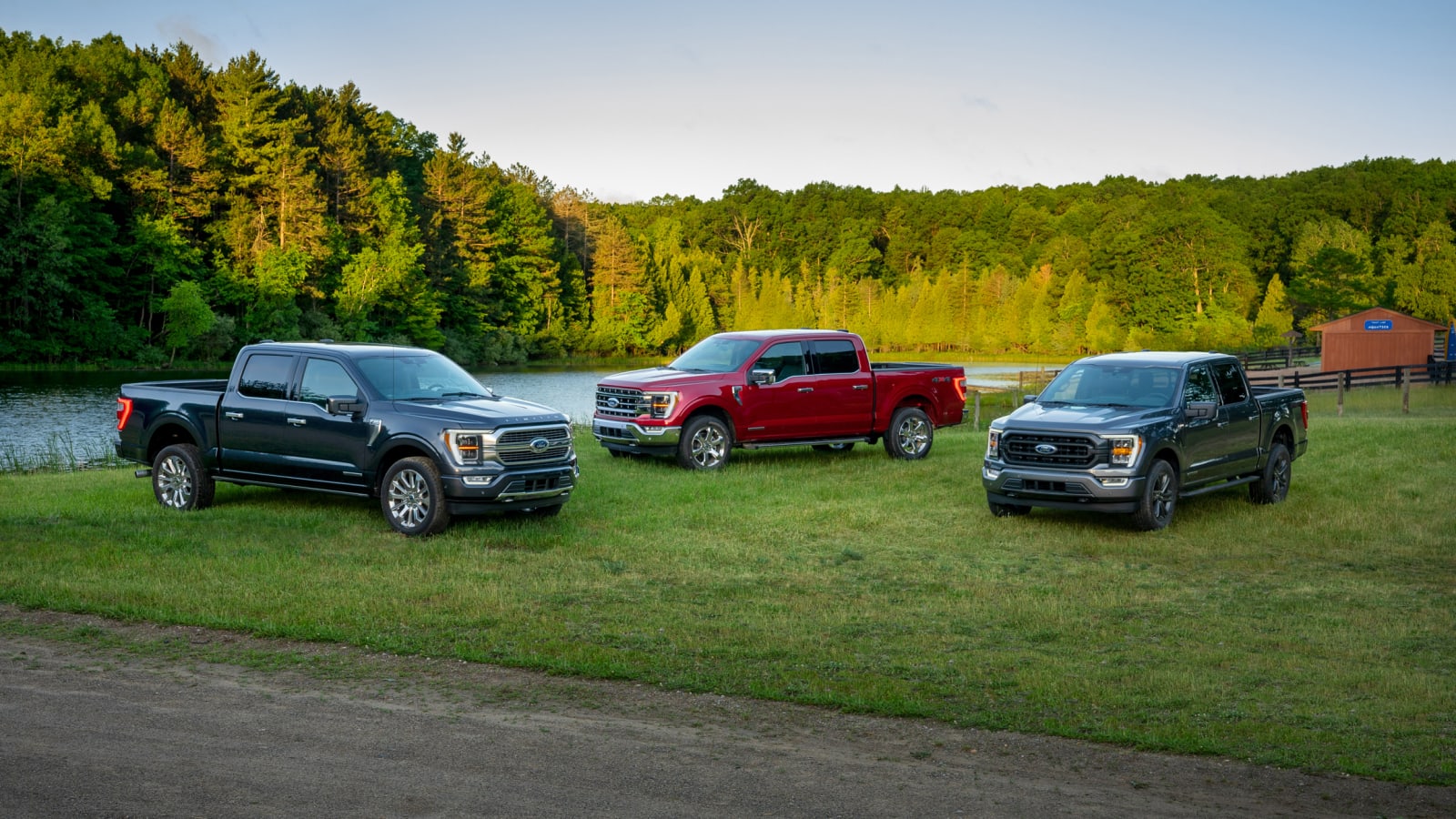 While the F-150's interior dimensions remain effectively unchanged, the cabin receives several upgrades in the comfort, convenience and productivity departments. The headliner here is Sync 4, which is the latest generation of Ford's infotainment suite. Ford says this is more than a mere software update, as the system's processing power has been increased to improve responsiveness and support new features, including wireless smartphone integration.

Android Auto and Apple CarPlay are both natively supported, and Sync 4 carries on Ford's partnership with Amazon for Alexa integration as well. In addition to these background improvements, there are also some larger screens. The new standard screen is an eight-inch touch unit; higher-end trims (XLT and up) can be equipped with a 12-incher. These larger screens are accompanied by an available 12-inch digital cluster.

Ford has some new widgets for its buyers who use their trucks as more than mere transportation. For those who get a lot of long-haul use out of their pickups, Ford is offering a set of "Max Recline" front seats on the Platinum, King Ranch and Limited models. These seats fold almost completely flat, allowing for co-driver power naps or even rest-stop sleep breaks.

On the practicality front, the new F-150 gets a couple of key optional features designed to help buyers outfit their trucks to suit their normal use without having to segue into the aftermarket for practical solutions. The first is a full-width rear under-seat storage solution that both locks and folds flat to make way for larger cargo. The door-to-door footprint makes it ideal for storing longer items, Ford says, such as outdoor equipment or even some firearms.

Up front, those who use their trucks as office work spaces might appreciate Ford's new center console table. Dubbed "Interior Work Surface," this accessory folds forward from the center cubby, covering the space normally occupied by the gear selector and cup holders. The gear selector stows away, folding forward into a recess, allowing the table to be folded down creating a workspace that can accommodate a binder or notepad, or even a smaller laptop, saving owners from having to invest in complicated aftermarket swing-arm tables.

Check out 1:30 in the first video in this post to see the stow-away gear selector and fold-down work surface in action.

Not all of the 2021 Ford F-150's exterior updates are for the purpose of aesthetics. In fact, some of the key upgrades come on the practicality front. A redesigned bed and exterior lighting system contribute some of the new truck's most impressive party pieces. The new exterior lighting system can be activated from the Sync interface or via Ford's smartphone companion app. Individual lights (front, side, rear and bed) can be turned off and on as needed, providing the desired illumination for any given outdoor activity.

The true "killer app" feature being offered is a new in-bed power station, which is essentially an integrated generator. This hub comes in three flavors, two of which are unique to the PowerBoost hybrid model. The base option, available even on gas-engine models, provides 2,000 watts of total power. A 2,400-watt version comes standard on all PowerBoost models, and an optional 7,200-watt upgrade is also available. 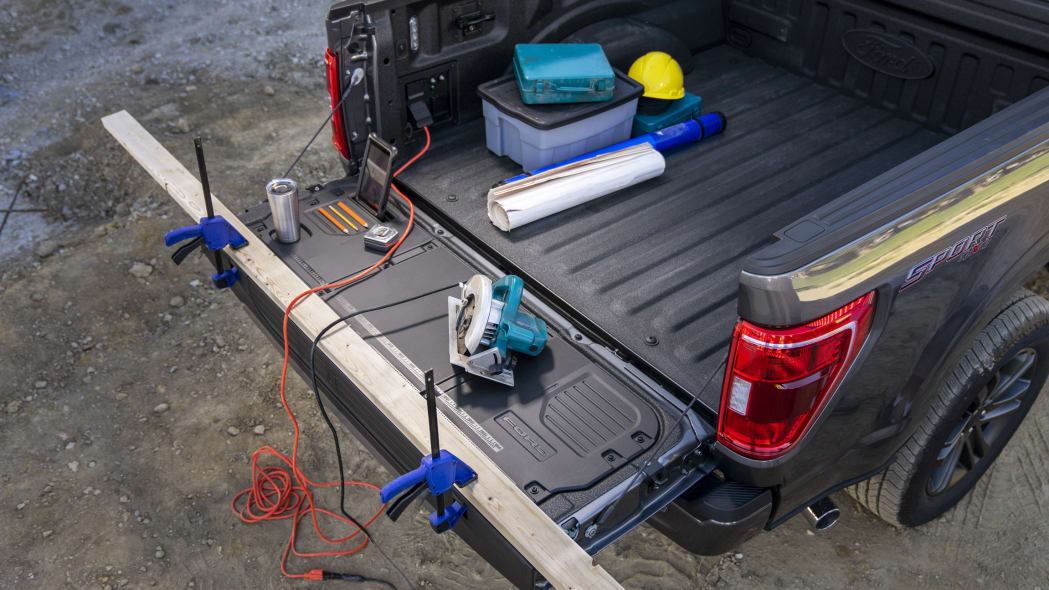 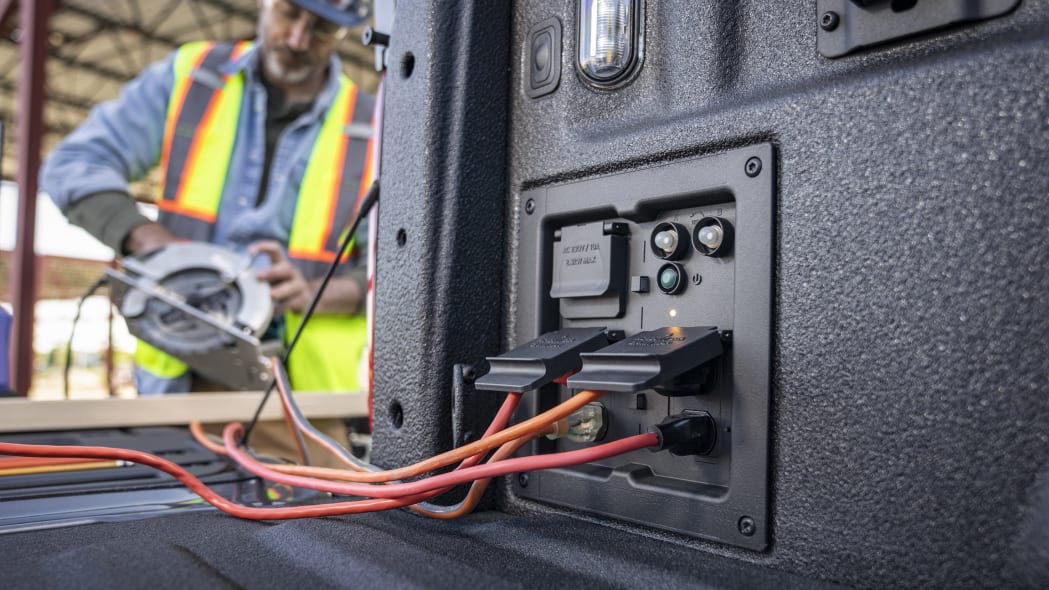 The 2,000- and 2,400-watt versions include dual 20-amp, 120-volt power outlets in the bed. The 7,200-watt option adds two more 120-volt outlets and a 30-amp, NEMA L14-30R 240-volt port for those who want to run more serious equipment. Ford says the 2,400-watt generator can run for 85 hours on a tank of fuel at maximum load; the 7,200-watt upgrade will go just 32 hours on a full tank, but considering how much more robust it is, that's still plenty impressive. All three variants can be powered while the truck is in motion, which is handy for charging equipment or toys while on the go.

Continuing the "Work Surface" theme of the 2021 F-150's cabin, Ford is also offering a completely flat tailgate option for those who need the extra workspace. The tailgate now also incorporates standard cleats for securing longer cargo, and has indentations that can be used for clamping down work materials.

$1,412 - $4,587 Nat'l avg. savings off MSRP
See Local Pricing
I'm not in the market for a vehicle at this time. Please move this suggestion to the side for 30 days.
Huge Savings