SILVERSTONE, England – Not so long ago the Toyota range seemed like a sea of beige. Then came the 86. Sure, Toyota was chasing Le Mans glory, there was World Rally Championship heritage and Lexus was doing some cool stuff, but the 86 is where things began to turn around. There's even a TRD-tuned Camry now.

But diehards never lost faith, hanging onto their beloved old Celicas, Supras and MR2s to tune and customize. That's readily apparent going by the turn-out for the Toyota Parallel Pomeroy Trophy. Californians can chuckle at the idea of car meets being conducted under anything other than blue skies but, here in the U.K., enthusiasts are a tougher bunch and events go ahead even in 50-mph winds and horizontal rain. No matter what you’re driving.

I follow an exquisite, Zagato-bodied Alfa Romeo 1900C into the circuit and, in the pits and paddock, there are GT40s, Aston Martin DB6s and all manner of weird and wonderful vintage machines whose eccentric English owners are preparing for the Pomeroy Trophy on the main circuit. Nobody seems to know exactly what that entails. Everybody seems determined to have a good day regardless. It feels a long way from Pebble Beach.

This is the second year Toyota Great Britain has run its own Pomeroy Trophy in parallel, which at least explains the name. And, OK, it’s basically just an autocross competition on what remains of the wartime runways on which Silverstone was built. To determine a winner, attendees take their cars through a series of tests in everything from first-gen Priuses to privately imported Tacomas. There's a suitably arcane scoring methodology relating to chassis length that's somehow intended to level the playing field. 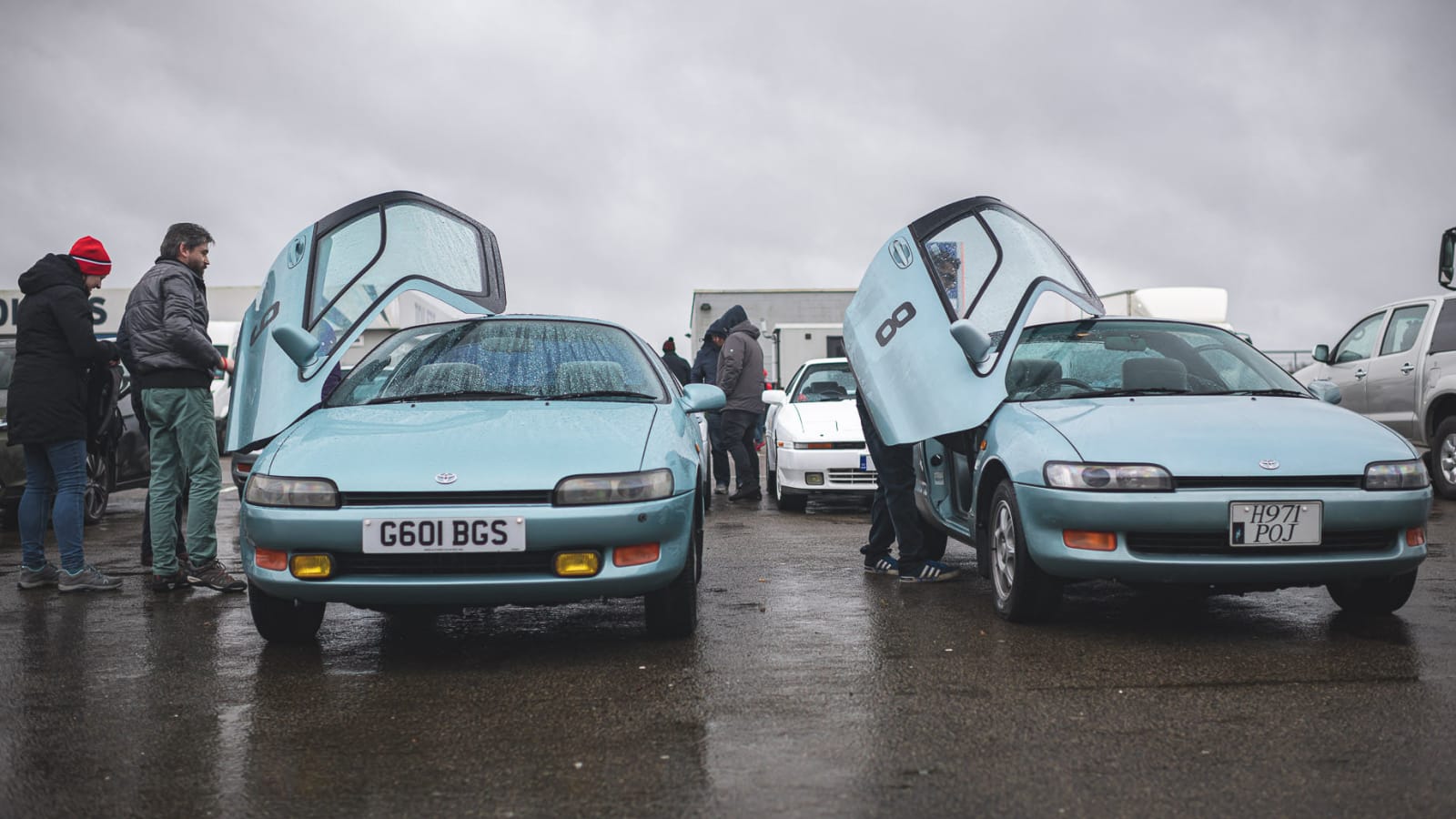 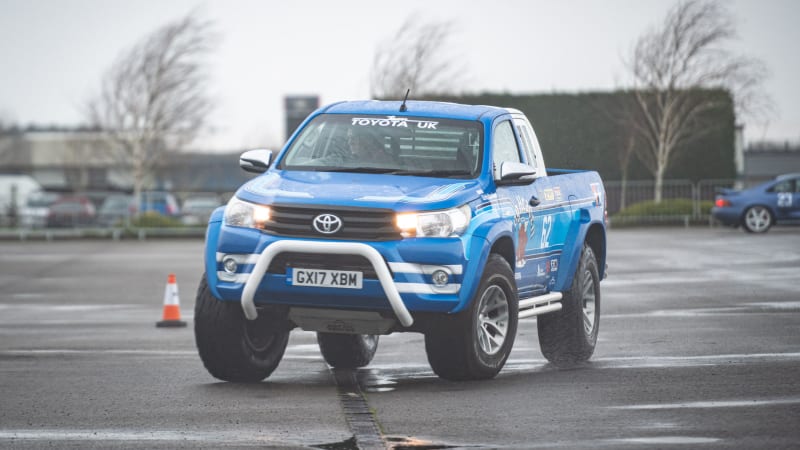 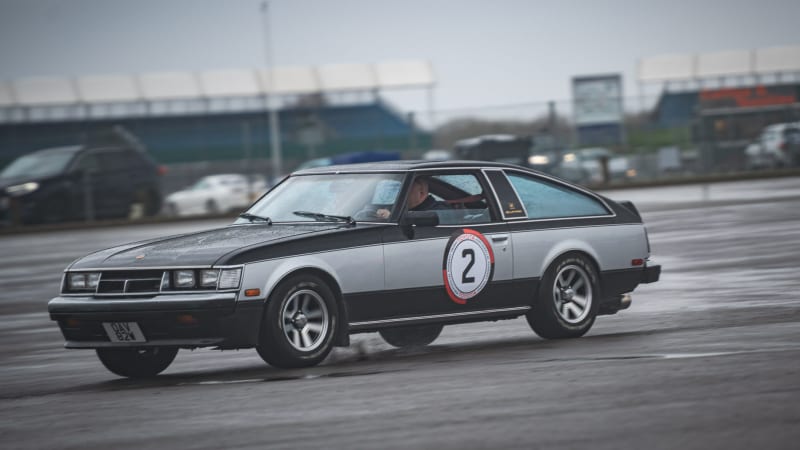 Ahead of the event I’m offered the pick of Toyota UK’s impressive heritage fleet, temptations including a mad, mid-engined Aygo built on MR2 running gear and a Tamiya Hog Heaven inspired Hilux. Although I’ve driven it before (OK, because I’ve driven it before) I only have eyes for the immaculate 1987 AE86. The timing works out, given the bright blue 86 special edition I’m in ahead of the event. The chance to drive it back to back with the original Hachi-Roku is too good to miss.

Various AE86s were sold according to the markets in which they appeared. the Japanese (and Gran Turismo fans) would know it by Corolla Levin or pop-up headlight Sprinter Trueno variants, while Americans knew the Corolla Sport GT-S. Whatever it’s called, the formula of a high-revving 1.6-liter twin-cam engine, short-wheelbase and live rear axle make it a true hero car, be that in popular culture, drifting, circuit racing or rallying. This one, in U.K.-spec, fixed headlight Corolla GT Coupe form, is an especially sweet example.

I can remember the hype ahead of the 86’s launch and the surprise that, of anyone, Toyota was the brand promoting the return of accessible, driver focused fun. Since it hit the market there has been divide between those who appreciate the 86’s approach and those who consider it over-hyped and under-powered. Project figurehead Tetsuya Tada held out, once explaining to me with typical Japanese directness that anyone craving more horsepower simply “didn’t get it.” The smile on his face as he said it suggested he knew red meat for the power hungry was coming though: he was already hard at work on the A90 Supra. 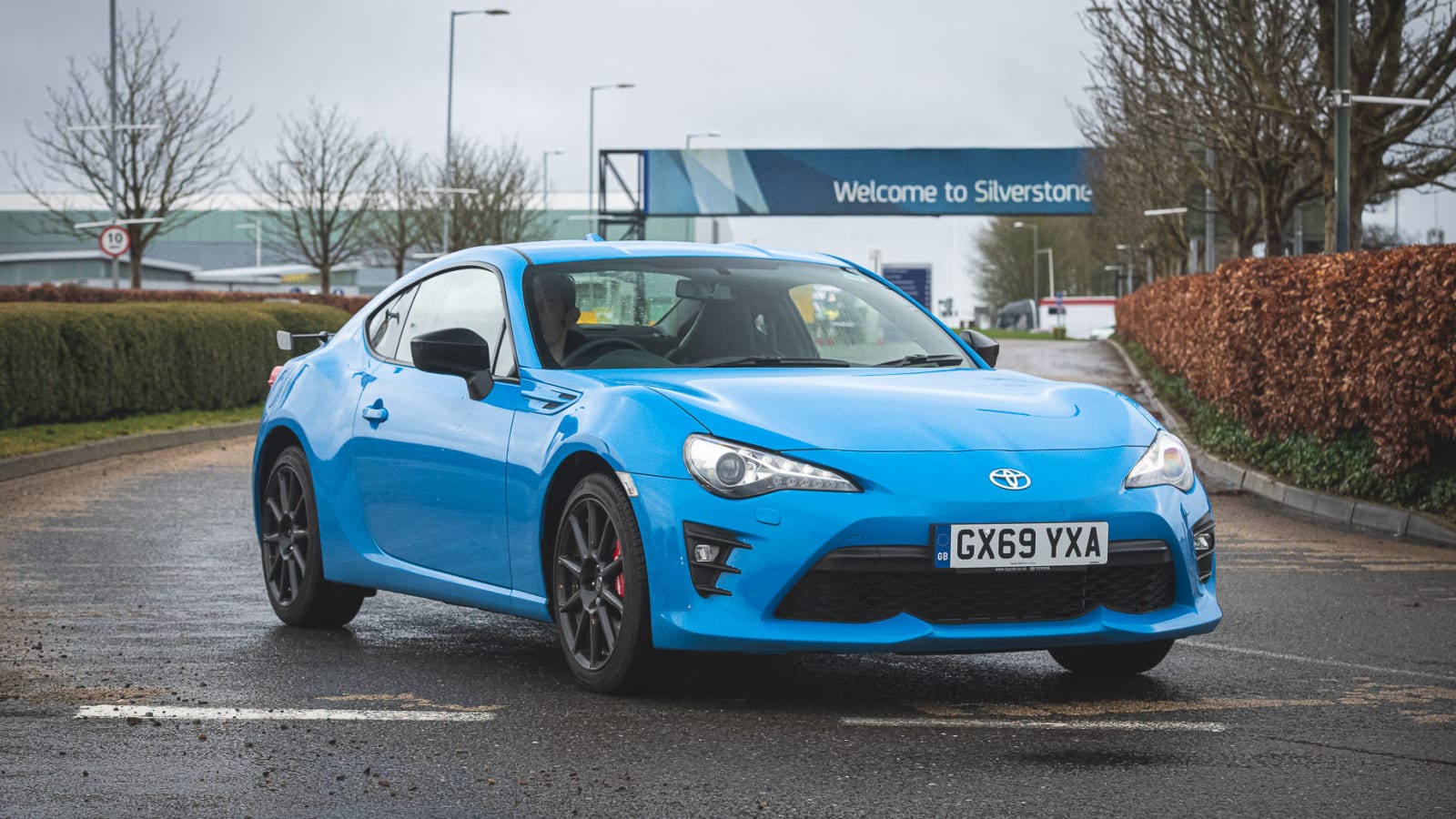 I’m glad he stuck to his purist guns with the 86, though. It’s raw but it has the perfect driving position, stick shift and chassis set-up. Plus, the appetite for going sideways at every opportunity is just the tonic in a world obsessed with horsepower, lap times and macho bragging rights.

This didn’t come out of nowhere though, as the AE86 proves. OK, so this example has a loud exhaust, but, even stock, the character of that little 4A-GE engine is a jolt of pure adrenaline. In a Corolla, 112 horsepower from just 1.6 liters is still impressive, but power delivery that makes a contemporary NA Miata seem diesel powered is what sets it apart.

You don’t so much turn the plastic-rimmed, unassisted wheel to steer – all you need to do is apply a little pressure to indicate your intended direction of travel and squeeze the accelerator. The AE86 is the most responsive, throttle-adjustable car this side of a Caterham Seven on a wet day. For an autocross like this it’s perfect. In traffic, meanwhile, the ability to be on the lockstops without exceeding 30 mph is as hilarious as the reaction from other drivers, mystified as to why the driver of the car they thought was in the midst of a huge accident is in fact grinning from ear to ear.

Put simply, this little AE86 is a riot. Never in a million years did I ever think I’d be saying that of a 1980s Corolla, and much of that spirit survives in the 86 you can buy in a Toyota dealership now. Even in the midst of a winter storm.