We're starting to warm up to Cadillac's smallest crossover The 2020 Cadillac XT4 is Cadillac’s smallest crossover in its burgeoning lineup of SUVs. Most of the attention is on the new Escalade these days, but the XT4 is where someone with a lighter budget might enter the Cadillac brand. Our tester happens to be the Sport model, giving it a distinctive appearance, separate from the Luxury and Premium Luxury trims. This one has a gloss black mesh grille, black trim throughout the exterior and Sport-specific wheels — the others rely much more heavily on chrome. Cadillac stepped it up in the design studio for the XT4, as one of its best qualities is the exterior design. It compares well to other small crossovers and doesn't look like your typical cookie-cutter crossover on the road.

There’s only one engine available, and it’s a 2.0-liter turbocharged four-cylinder that makes 237 horsepower and 258 pound-feet of torque. When the XT4 came out for the 2019 model year, this engine was brand new. Today, Cadillac is passing it around the lineup to vehicles like the CT5 and CT4. A nine-speed automatic transmission is the only transmission option, as well. Our tester has all-wheel drive, but front-wheel drive is standard on lesser XT4s. There isn’t a whole lot changed for the 2020 model year, but Cadillac did add an “Off Road” mode and made a bunch of safety equipment standard.

With our test car being a Sport trim with all-wheel drive equipped, the base price is $42,295, a fair bit greater than the $36,690 standard car. After options, our XT4 totaled $48,310. The most expensive extra is a $1,500 Bose Centerpoint audio system, combined with navigation. An $1,100 Driver Assistance package brought adaptive cruise control, enhanced automatic emergency braking and reverse automatic emergency braking. A Cold Weather package added heated seats all around and a heated steering wheel for $850. Finally, the $470 Driver Awareness package brought automatic high beams and lane-keep assist.

Senior Editor, Green John Beltz Snyder: This one grew on me the more I drove it. I was unconvinced for the first part of my drive, but then things started to feel more well-though-out as I used them. For instance, the line of buttons across the center stack looks daunting, until you turn the car on and their labels are illuminated. Then everything is easy to find thanks to the lighting, symmetry and the fact that you only have to look down a single line of buttons rather than hunt around a grid pattern.

I love how visible, intuitive and tidy this row of switchgear is in the @Cadillac XT4, day or night. @therealautoblog pic.twitter.com/3rMO0iMrXn

As for the rest of the interior, it’s quite attractive. I like the look of the leather, and the carbon fiber accents aren’t overwhelming — just a nice splash here and there to fill in gaps in leather and soft plastics. The rear doors are tall, and it was easy to install my large son’s child seat, as well as the large son himself. When not in use, I like the way the seatbelt buckles tuck away into their little slots in the seat cushions. It just looks tidy.

This is a peppy little guy, too. In two-wheel-drive mode, it was easy to break traction on cold pavement with the front tires when pulling away from a stop. Under hard acceleration, the shift logic and gearing is such that upshifts are quick and land the tach needle high up in the rev band’s sweet spot. In calmer driving, it’ll shift quickly and often to save fuel. It feels appropriate however you choose to drive it. I like it more than I thought I would.

Associate Editor Byron Hurd: Like John, I needed some time to get to know the XT4 before things started clicking. Of the Cadillac crossovers I've driven, this feels like it's the most coherent package, and it gets a lot of little stuff right.

The transmission didn't behave quite as well as I would have liked. Even in Sport mode, it seemed hesitant to downshift unless it had no other choice. If possible, it would stay in gear and just crank up the torque, which wasn't the end of the world, but I would have liked the gearbox to play along a little more enthusiastically.

This is my favorite exterior touch on the @Cadillac XT4 in the @therealautoblog fleet. These wheels look sharp. I'd probably want some contrast in the center caps but I could live with it as-is. pic.twitter.com/C7VrYmbzAG

I think the XT4's interior is good enough for the segment (and for its price point), but there's absolutely nothing memorable about it. Everything is comfortable; everything works, and the massaging seats are delightful. But if you asked me to tell you what materials were on the dash or what the vents looked like, I'd be stumped, and at the time I'm writing this, it has barely been three hours since I stepped out of it.

The most memorable thing to me about the XT4's cabin is just how commanding the driver's view is. The dash seems to fade off below the horizon, leaving a perfect view of the road. Crossovers and SUVs should have excellent visibility as a general rule; sadly, it's uncommon enough to be noteworthy in this case.

News Editor Joel Stocksdale: There's one thing about the XT4 that has lingered with me, and it's the engine. And it's not for a good reason. While it provides good power and torque, it's terribly unrefined. It's gravelly and thrashes about, and has no business being in any sort of luxury vehicle. Maybe if the XT4 was a sportier and harsher crossover, I could let it go, but its demeanor is one of quiet and comfort. Quiet and comfort that was rudely interrupted every time I put my foot down.

It's not all bad, though. I sincerely enjoy the XT4's styling. The full-height taillights are highly distinctive, and they make it obvious that this is a Cadillac, not just any other luxury crossover. The whole thing has a nice, squat stance, and the sheetmetal is taut over the chassis. I think Cadillac's other crossovers, the XT5 and XT6 could learn a little something from this more outgoing shape. Though, the XT4 itself could learn a lot from Cadillac's much better driving sedans. 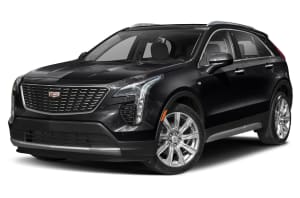