Will the bull market for crossovers last long enough for Caddy to cash in?

The Cadillac XT4 is a valiant first effort in the luxury compact crossover market with a refined ride and smooth, powerful engine. Its generic interior design doesn’t quite live up to the sharp angles on the outside, though.

8
SEATTLE, Wash. — The 2019 Cadillac XT4 compact crossover debuted in New York, Cadillac's recently-adopted home, several months ago. Since then, a lot's changed. Cadillac honcho Johan de Nysschen got the boot, the economy's continued to improve, and we've changed coasts to experience the XT4. The setting is Seattle and its environs, a place that embodies the moment – a town flush with tech money and outdoor lifestyle experiences. Oh, and traffic. Lots of that.

What hasn't changed is that this is a vehicle that Cadillac desperately needs. Between and below the Escalade and XT5 are vast gulfs of white space that could swallow entire crossover-focused brands. The dealers, we imagine, howled. And de Nysschen was replaced, it turns out, by a career GM exec with a penchant for building bridges with dealers. Must be a coincidence.

The XT4 should please everybody involved in that power struggle. It's cute, for one, which will make for happier dealer-customer interactions. It brings appreciable but unintimidating technological advances to a brand looking to flex some segment leadership muscles. And it doesn't strictly feel like a rebadged version of a lower-tier product, a bad habit that Cadillac keeps failing to kick. We'll discuss its competition within its segment, and how they compare to the XT4, in another piece to follow. 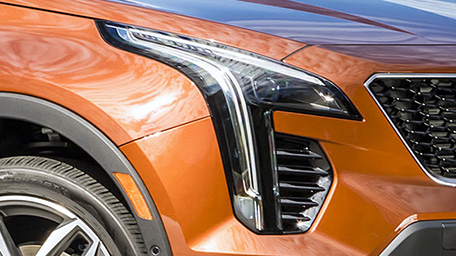 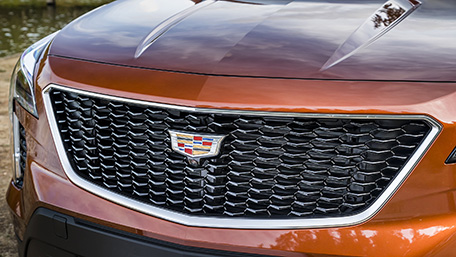 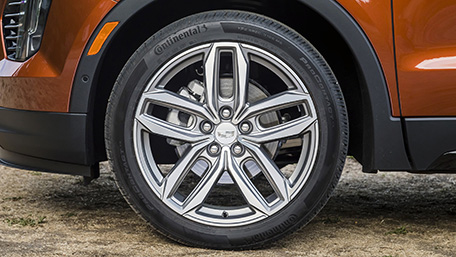 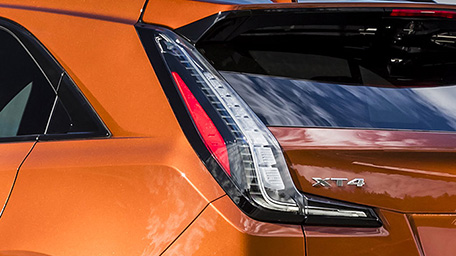 If you're wondering where the XT4 comes from, the easiest way to think about it is as a cut-down version of the basic underpinnings of the XT5, wrapped in nicely-proportioned sheetmetal. To be blunt, there's more unadorned plastic on the lower fascia and rockers than we'd like at this price point, but the rest is handsome. Large, elegant lamps sit at both ends, set off with trendy creasing and little accent vents – Sport models have clear taillight elements, while others have red-tinted lenses. The XT5, itself a newer vehicle, looks outclassed and dated instantly when put up next to its sleeker, more modern little sibling.

The interior, however, is more alike than different. The major shapes are similar, as are the placement of the switchgear. The 8.0-inch infotainment screen is, as in the XT5, embedded in a slabby wedge of dash. It's still a touchscreen, but a little dial now provides an alternate way to navigate. A Qi charging panel and easily accessible, but not too prominent, USB, charging, and aux inputs reside just above. The seats in our tester, a Premium Luxury trim, are covered in a soft, warm caramel-colored leather. Major ergonomics – wheel placement, size, pedal box, shifter – are good enough to recede entirely from thought after a couple of minute adjustments. This is a not a car you fidget in – unless the forward collision warning goes off, which it does frequently and erroneously, seemingly at random. At least it keeps you alert! The base trim level doesn't get any of the XT4's optional active safety features, so if this concerns you save some dough and get a Luxury. 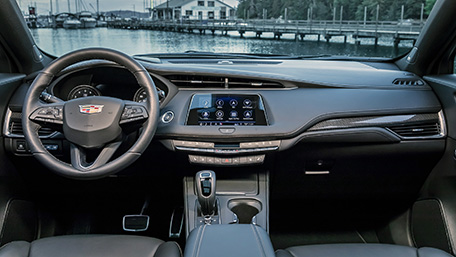 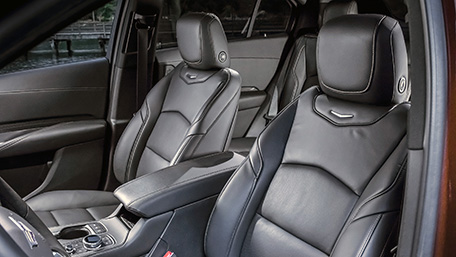 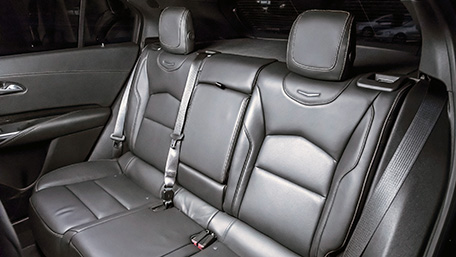 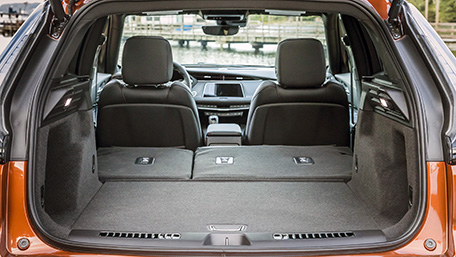 More importantly, like the XT5, it doesn't feel much like a Chevy with its badges taped over. A few cheap touches distract, and there's a very un-Lexus-like rattle somewhere in the guts of the B-pillar by my ear, but on the whole it's a convincing premium proposition. Cadillac is so close to overcoming closest competitors' interior experiences. Maybe in a product cycle or two, in an alternate universe, de Nysschen could have done it.

For the present, the most important thing Cadillac needed to do with the XT4 was improve refinement. Anyone that's driven the old 2.0-liter turbocharged inline-four knows that it's not a smooth operator. Cadillac canned it. Under the hood is a next-generation unit, and to get the controversial aspect out of the way, it's significantly detuned – down 15 horsepower and 2 pound-feet of torque from the version of the old engine found in the Chevy Equinox. It's an even starker contrast with the longitudinal configuration unit found in the ATS, which is rated at 272 hp and 295 lb-ft. Some buyers will not be able to look past this. That, I think, would be a damn shame.

In the XT4, the new engine makes 237 hp and 258 lb-ft. The downgrade in power is partly due to some internal differences. The old engine was a "square" arrangement – the bore and stroke were equal, but the new engine is a long-stroke design, with a bore of 83 mm and a stroke of 92.3 mm. More stroke generally means more torque, and while the new engine is down on power, it's more efficient and refined – and there's plenty of juice off the line. 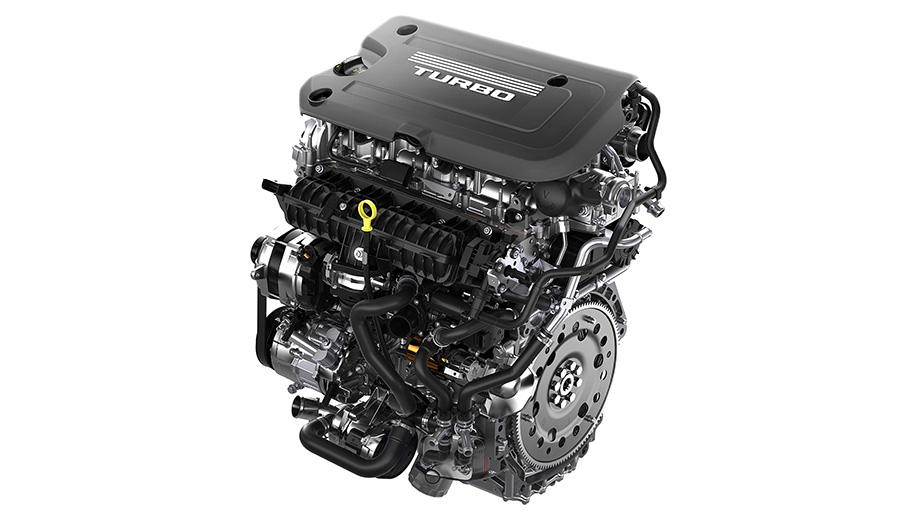 There's some neat fuel-saving tech built into the new motor, too. Caddy claims up to 15 percent greater fuel economy in some load ranges. This is due in part to the technologies bundled together with a throwback name: Tripower, which will also be found in GM's new 2.7-liter truck engine. These are novel cylinder deactivation and variable lift systems, once the purview of V-type engines, now applied to inline-fours. There are three lift profiles available on the intake side – high, low, and off. Off is cylinder deactivation, disabling two cylinders in light load conditions. It is entirely imperceptible to the driver.

It's tough to convince people that taking power away is in their best interest, but here, the remarkable increase in refinement and not-insubstantial increases in fuel economy are worth the power penalty. Pushed, the engine doesn't lose its composure. We climbed up into the Cascade Mountains for a bit. As the grade increases and the air thins, semis on the busy trucking route put on flashers and become rolling roadblocks. The XT4, with a twin-scroll turbo feeding air at more than atmospheric pressure, had no trouble squirting into a gap and slingshotting past to make a quickly-approaching exit. That is all the XT4 needs to be able to do – the toughest real-world test you can ask it to perform with a straight face – and does it without harshness unbecoming of an entry-level luxury crossover. 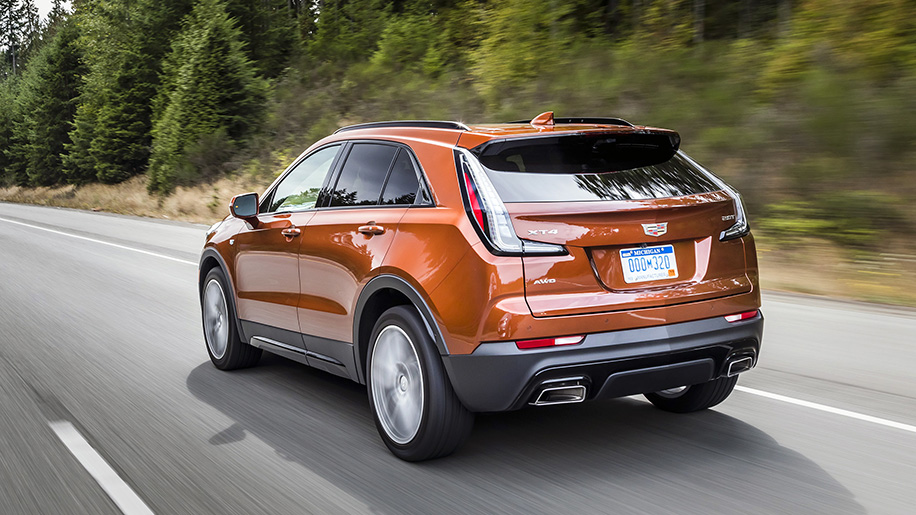 The slick nine-speed auto is a big help. The electrically-boosted brakes, however, proved disconcerting – an uncanny valley of muted feedback made it tough to stop accurately and consistently at a fixed point before a stoplight. And so too did the electrically-assisted power steering, which was a touch too light in all conditions, although admirably accurate. It features a vibration damper to remove unwanted column jitters, which may cause some of the isolation. GM makes some of the best racks in the business, approaching the feel of a good old hydraulic rack in some applications. The XT4's rack is acceptable but not notable. The all-wheel-drive system, available on all trims, is nifty, too. It's a twin-clutch design, able to shift power from side to side the legit way, and paired with a rear axle disconnect system, allowing the driver to lock the car in front-wheel-drive mode for better efficiency.

The ride, however, is a perfect compromise. Continuously-variable damping is available on Sport models, but the conventional dampers on the Premium Luxury model are well calibrated. The ride is comfortable without being overly coddling – somewhere, nebulously, between Lexus and BMW. Just as it should be. It's a rigid platform, with some elements solid-mounted to the chassis and some isolated by bushings, like the rear five-link suspension cradle. The only bad handling habit we noticed in a thoroughly typical freeway and suburban drive route was a bit of head-tossing lateral motion when hitting an imperfection going around a corner. Brake dive and other motion sickness-inducing traits are mostly absent.

If that sounds to you like the template for a competent near-luxury crossover, it is. There's enough novel tech to provide bragging rights, it's obviously a Cadillac but also a handsome crossover in its own right, and it's a pleasing enough place to sit while scooting around in traffic or on the freeway. This is a genre where competence and curb appeal are highly valued, and the XT4 has enough of both to be a real competitor.