The runt of the three-row luxury class gets a new engine, updated tech and revised styling

PALM SPRINGS, Calif. — Point the 2020 Audi Q7’s octagonal maw up California’s Route 243 and the three-row luxury ute’s stoic body control, just-right gear selection and right-now power delivery define an SUV that’s at once a respectable driving tool, a genuine luxury vehicle, and has a third row that makes it relevant among bigger competitors. It is smooth and silent. It is amply quick. And despite its size and heft, it tiptoed effortlessly through the Southern California forest.

We drove the overhauled Q7 for a day in and around the San Jacinto Mountains, exploring both its relaxed cruising on freeways and its athletic moves on mountain byways. Though not all new for 2020 — this second-generation Q7 was released for 2017 — the seven-passenger SUV benefits from significant revisions. Together with the smaller and far more popular Q5, the Q7 is the backbone of Audi’s sales in the United States. The company can’t afford to screw it up, and it hasn’t.

Two engines are available: The Q7 45 TFSI uses a turbocharged 2.0-liter four-cylinder rated at 248 horsepower and 273 pound-feet of torque, the same as last year’s four-cylinder Q7. Move up to the Q7 55 TFSI, and a 335-hp single-turbo 3.0-liter V6 replaces the aging supercharged 3.0-liter V6 from last year, which produced 329 hp. Torque increases significantly from 325 lb-ft with last year’s V6 to 369 lb-ft for 2020. Every Q7 is all-wheel drive, offers a lockable center differential and comes with an eight-speed automatic transmission. 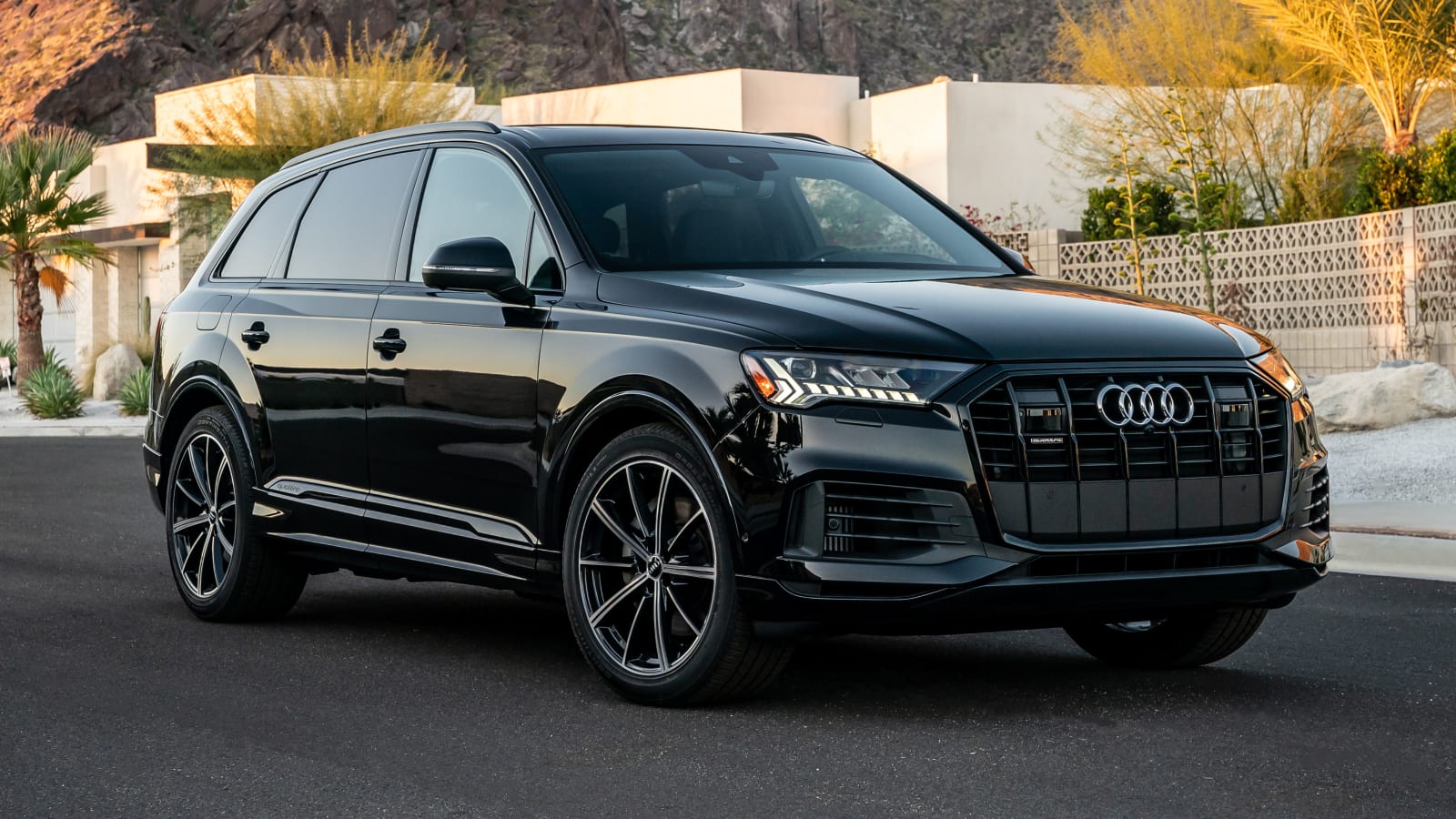 We drove only the V6-equipped model, which features a 48-volt mild hybrid system enabled by a belt-alternator-starter arrangement on the new V6. Even with a miniscule battery capacity of less than 0.5 kWh, the system enables more aggressive start/stop operation at speeds as low as 14 mph when slowing to a stop. It’s virtually imperceptible from the driver’s seat, and unlike many start/stop systems, it managed to shrewdly avoid killing the engine in scenarios where doing so would be intrusive.

However, it makes no difference for fuel economy. In fact, the V6-powered 2020 Q7 is actually less efficient than its predecessor, returning an EPA-estimated 18 mpg combined. It was previously 21 mpg, a difference that according to the EPA could cost you $400 extra per year based on average fuel costs.

The new, more powerful V6 also doesn't improve straight-line performance, as it turns in the same Audi-estimated 0-60-mph time of 5.7 seconds. Gaining 155 pounds might have something to do with that, but oddly the four-cylinder improves by 0.2 second (it gained 55 pounds). Its fuel economy wasn't available at the time of this writing, but as it carries over, it seems likely the 45 TFSI will return the same 21 mpg. Towing capacity stands at a substantial 7,700 pounds with the V6 and 4,400 with the inline-four. 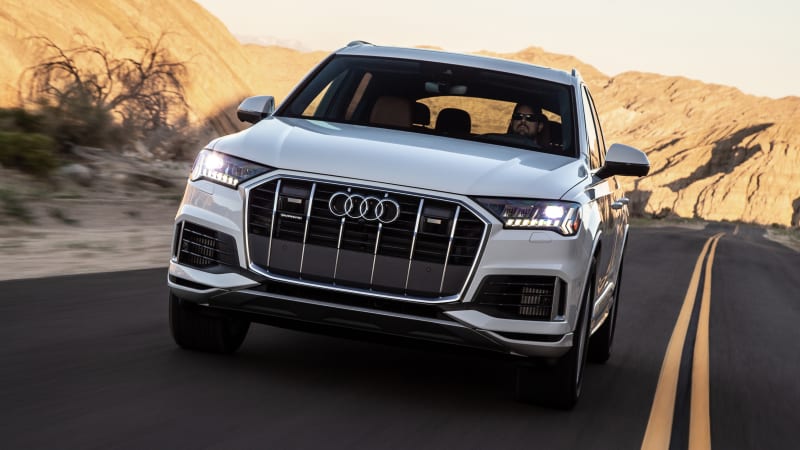 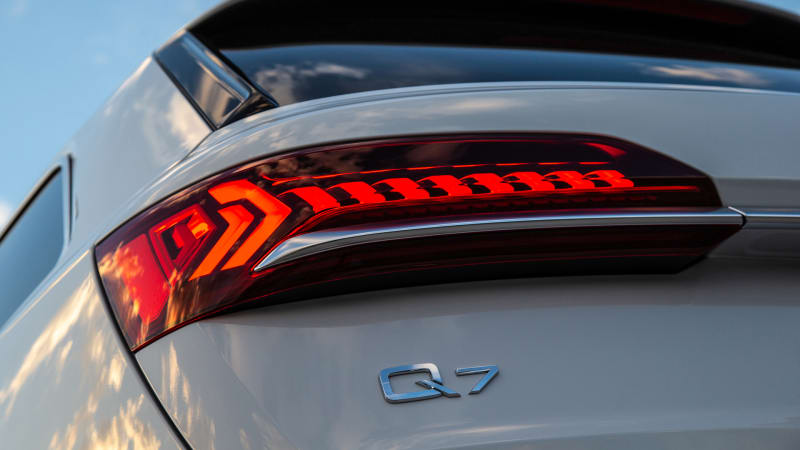 The changes are subtle from the outside, but if you’re familiar with the Q7’s somewhat squat proportions and modest detailing they will be obvious. They also help align the SUV with the brand’s most recent design cues. Audi isn’t shy about designing grilles that make a statement, and this Q7 continues that trend.

There are new head- and taillights, the former incorporating optional HD Matrix technology, which remains disabled thanks to ancient and likely soon-to-change federal regulations. HD Matrix lights employ an array of independently aimed LEDs, which are turned on or off to illuminate specific areas of the road ahead, theoretically enabling longer reach without dazzling oncoming drivers. Audi promises that the technology will be enabled via a software update once the DOT makes it legal. Also included with HD Matrix lighting is Audi’s laser light technology (high beams only), which further increase range and specificity of lit areas relative to less complex (and less costly) light technologies.

Inside, the Q7 adopts the wide, low dash of the Q8, complete with its dual-touchscreen infotainment/HVAC displays, which debuted on the current-generation A8 for the 2019 model year. Though the screens — 10.1-inches top and 8.6 inches below — allow a virtually button-free center stack, they come with at least one undeniable downside. They relegate some critical tasks into the system’s submenus, which is both time consuming and annoying. Still, the screens look modern, and their response time, which is acknowledged by both haptic and audio feedback, is quick. And when they’re off, they disappear into an otherwise black dashboard, creating a look that’s more integrated and better finished than the Q7’s German competitors. 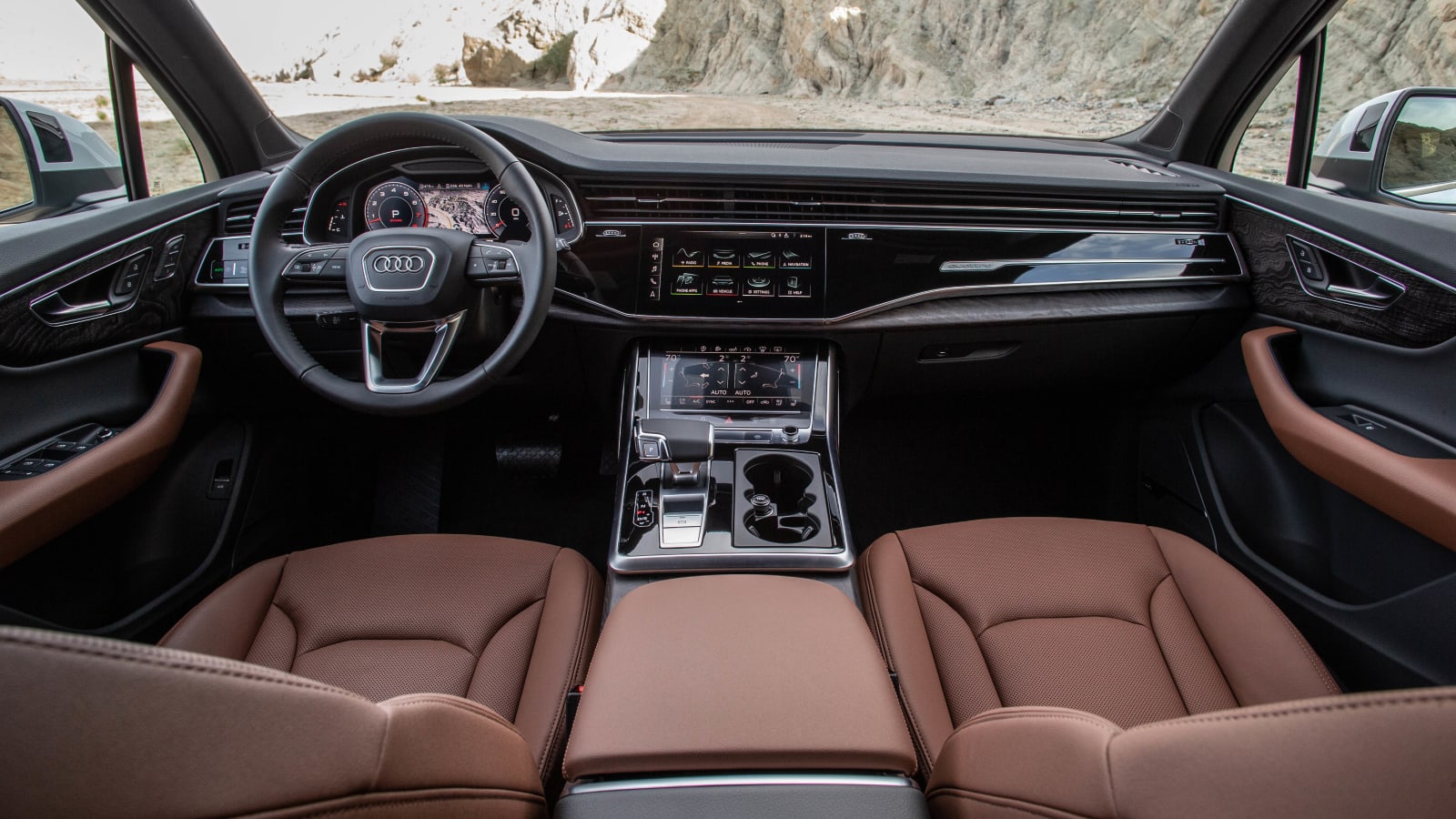 Audi’s 12.3-inch Virtual Cockpit configurable instrument cluster, integrated navigation, Apple CarPlay and Android Auto are standard on all Q7 trims. Adaptive cruise control is available on Premium Plus and standard on Prestige trims. Audi’s Traffic Light Information system, which helps drivers adjust their speed for upcoming signals and offers countdown timing at red lights is optional. The service is currently available in 30 cities and more than 10,000 intersections in the United States.

First- and second-row seats provide ample space for adults, but you’ll need to be petite to be comfortable for any lengthy drive in the way back. The Q7 is among the least roomy three-row luxury crossovers – BMW’s X7 and Mercedes-Benz’s GLS outsize it significantly in both third-row space and total cargo volume, as do the Volvo XC90 and Lincoln Aviator.

The upside of a smaller SUV? More compelling moves from behind the wheel. Though we drove only the steel-spring equipped Premium Plus trim (flanked by the Premium below and the Prestige above), optional load-leveling and height-adjustable air springs are available. But you’ll not miss them as the conventionally sprung Q7 shrinks itself admirably when asked to move with purpose. It never encourages late braking or apex seeking, but as crossovers go, the thing is refreshingly capable. Part of its magic is ZF’s obedient and intuitive eight-speed automatic transmission, which consistently found the right gear when left to decide for itself and reliably swapped cogs when triggered by the wheel-mounted paddles. 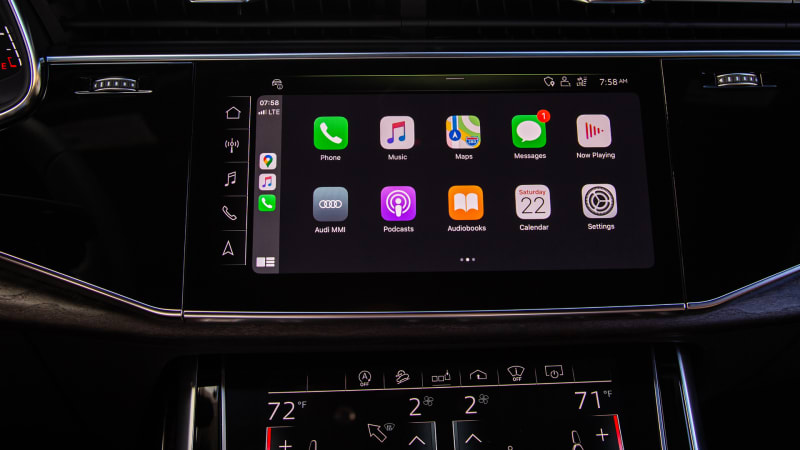 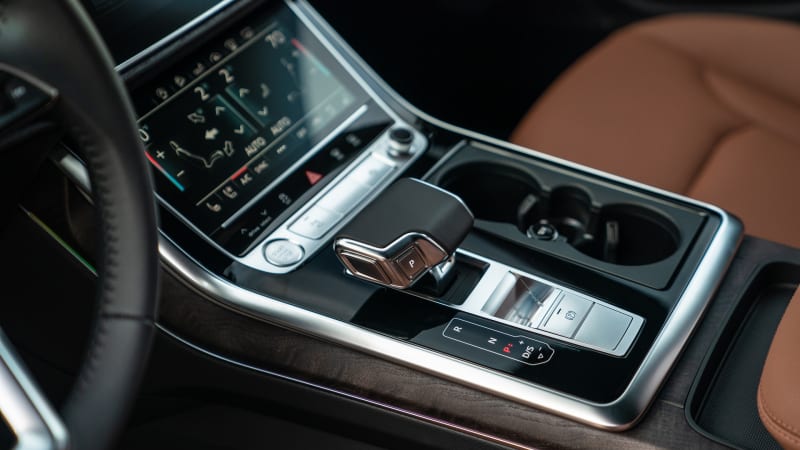 Four drive modes — Comfort, Dynamic, Auto, and Individual — are standard on every Q7. Steering weight and accuracy in Dynamic mode both inspire confidence to push the Q7 to modest sedan speeds on most roads. Rear-axle steering, which adds high-speed stability and shortens the Q7’s turning radius at low speeds, is available on Prestige trims.

And if the driving experience is a primary concern, the addition of the 500-hp V8-powered SQ7 this spring will only help the case for the drivability of Audi’s SUVs. Perhaps the Q7’s biggest challenge is that its interior space is closer to that of most two-row crossovers like the BMW X5 and Mercedes-Benz GLE. Audi admits as much by calling the Q7 a midsize SUV in its own materials. And it’s hard to say anything is in the middle unless there’s something on either side. Plus, we’ve known for years that Audi owns a trademark on the Q9 name, suggesting that a bigger crossover is possible. If large SUV sales tell us anything, it’s that a properly sized three-row Audi crossover can’t come soon enough.

The 55 TFSI V6-powered 2020 Q7s are in dealers now starting at $61,795 (including destination), while the 45 TFSI four-cylinder versions will be available very soon starting at $55,795. Despite committing itself to somewhat cumbersome technologies (we’re looking at you, dual screens) and the V6's backward fuel economy slide, the Q7 is better than it’s ever been. Measured on behind-the-wheel experience alone it ranks with smaller and lighter crossovers, and we can’t argue with its build quality or opulent presentation. That it can tiptoe through the forest at sedan speeds is just gravy.