Slippery wagon bodystyle unlocks more range, but will that be enough in late 2021? 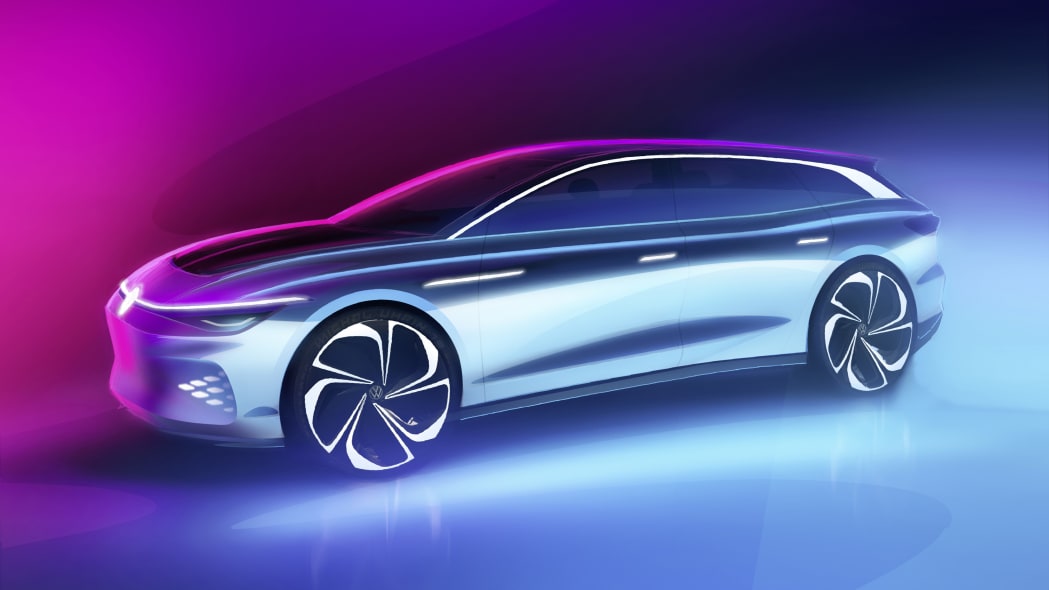 The seventh member of Volkswagen's ID. family is here in rendered form, and it's called the ID. Space Vizzion. The naming convention leads us to believe the ID. Space Vizzion is a riff on the ID. Vizzion sedan VW debuted at this year's Geneva Motor Show, and the design leads us to describe this new concept as a wagon. VW's press release refers to the Space Vizzion once as the "wagon of tomorrow," yet also claims twice that the concept "defines a totally new, fully electric car segment." We'll suppose VW is making a pioneering claim on the electric wagon segment, which hasn't been broached by any OEM yet.

The wagon form factor, if that's what we're dealing with, would pay dividends in range. If the wagon employs the same MEB-based drivetrain as the sedan, that will provide 302 horsepower from two motors, a 101-hp unit in front and a 201-hp unit in back. At Geneva, VW declared the ID. Vizzion sedan concept would run 413 miles (665 km) on a charge on the WLTP cycle. The ID. Space Vizzion is billed has having a 366.6-mile range (590 km) on the WLTP cycle, or 300 miles on our EPA cycle. Compare that to the real-deal crossover ID. Crozz, which has been mooted to get just 311 miles (500 km) on the WLTP cycle.

The preliminary range figures for the ID. Space Vizzion would shade the range numbers for all the cargo-focused offerings from any other legacy OEM if they translated to production right now; the Audi E-Tron and Jaguar I-Pace hover around 200 miles. Volkswagen says aero optimization via openings in the wagon's front fascia and roof, not to mention the lower overall profile, are responsible for the potential mileage figures.

Digital goodies and an artificial leather called AppleSkin highlight the interior. That leather gets its name from the inclusion of "residual matter from apple juice production."

The automaker has promised a production version will be released in late 2021, and different variants will be sold in the North American, European, and Chinese markets. The ID. Vizzion sedan was predicted to make production between 2020 and 2022. Even with the long-distance driving reach, these two additions to the EV lineup strike us as strange gambles in a world still mad about crossovers. By the time they arrive, we expect there will be at least a few crossovers that can go close to or beyond 300 miles on a charge. The question is whether EV buyers will consider offerings in two dying segments merely because they're battery powered.

We don't know what kind of surprises the ID. Space Vizzion is packing, so these are all just musings for now. We'll know more when the concept debuts at an event on November 19, the evening before press days commence at the L.A. Auto Show.