Even the Cayenne S is a dynamic wonder It’s nearing old-hat at this point to say, "The Porsche Cayenne is a tall Porsche sports car." But that is exactly the point. The idea of a nearly 5,000-pound, high-riding SUV being agile and sporty may not compute, but there it is. The Cayenne is a vehicle that makes a sports-car fiend shake their head a couple times — once to express just how ridiculous the premise is when walking up to it, then again while driving in appreciation of how well Porsche managed to execute it. The folks in Zuffenhausen are not known for underachieving.

Like every Porsche in the company’s ever-expanding lineup, the Cayenne offers multiple levels of aggression. This time, we have the Cayenne S — a sizable step up from the base Cayenne, but still far from the Turbo. Every Cayenne variant we’ve driven to date has left us smiling, and the S managed to keep the streak alive.

Under the tall hood and behind the awkward grille is a 2.9-liter twin-turbo V6 that makes 434 horsepower and 406 pound-feet of torque. That’s substantially more than the base single-turbo V6’s 335 horses and 332 pound-feet. According to Porsche, the trip to 60 mph takes 4.9 seconds in the Cayenne S equipped with the Sport Chrono package (ours was), a full second quicker than a base Cayenne, but also a full second slower than the big-T Turbo.

The sub-5-second S is more than quick enough for an SUV of its size, and the engine itself is a real zinger to boot. It’s the same power unit found in the Audi RS5 (where it makes a few more horsepower). Due to the significant weight difference between the two cars, the engine feels much more docile in the Porsche. Part of that is the sound. What little noise makes its way into the cabin is pleasant enough, but it would be nice if there were more drama to accompany the acceleration. The RS5 gets that thanks to its guttural and loud exhaust, but in the Cayenne S, you have to tick an option box for the sport exhaust system. Unfortunately, our tester didn’t have it. 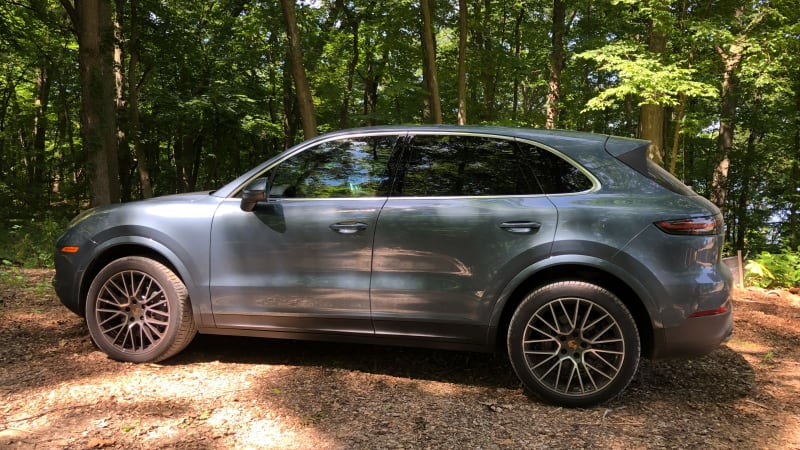 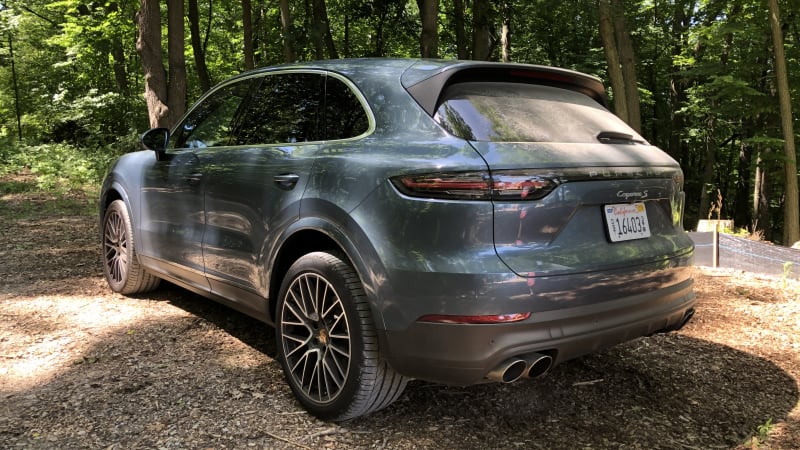 Turning the Porsche drive-mode selector knob on the steering wheel to its most aggressive Sport+ setting brings out some of the snapping viper we were hoping to find hidden inside. That knob, by the way, is the ideal method of selecting drive modes: Quick, simple and non-distracting, this unobtrusive, clearly labelled knob is a model to follow. The “Sport Response” button in the knob's bullseye is the icing on the cake – it makes you feel like you're in a “Fast and the Furious” movie, activating nitrous. It’s a special little feature carried over from the brand’s sports cars that further drives home the point you're in something greater than an average crossover.

Once in Sport+ on a twisty stretch of road, the Porsche qualities really shine. The steering is lightning quick and weights up nicely. The nose tucks into corners, reacting more like a nimble sedan than a tall crossover. Yes, it does feel strange hustling a 5,000-pound crossover through a winding road, but it's also enjoyable. It's that whole defying-physics thing.

Even more impressively, the Cayenne’s window sticker revealed that this example didn't have any of the optional chassis upgrades. It had the Sport Chrono package but not torque vectoring, four-wheel steering or the Dynamic Chassis Control active roll stabilization. Those options were fitted to the Cayenne Turbo we recently tested, and as we suspected then, this Cayenne S proves they're hardly necessary.

Throttle response from the twin-turbo V6 is near-instantaneous when boomeranging from corner to corner. The sensation of speed is slightly dulled from sitting so high up, but the speedometer doesn’t lie. A confidence-inspiring brake pedal makes stops from higher speeds a non-event. Brake dive is nearly absent as the Cayenne scrubs off speed with steadiness even with harder applications of the left pedal. It’s uncanny how level this SUV stays at all times. What's even more remarkable is that this is the mid-level Cayenne — things get more extreme with the Turbo, the Turbo S E-Hybrid (and the GTS that is likely show up at some point). 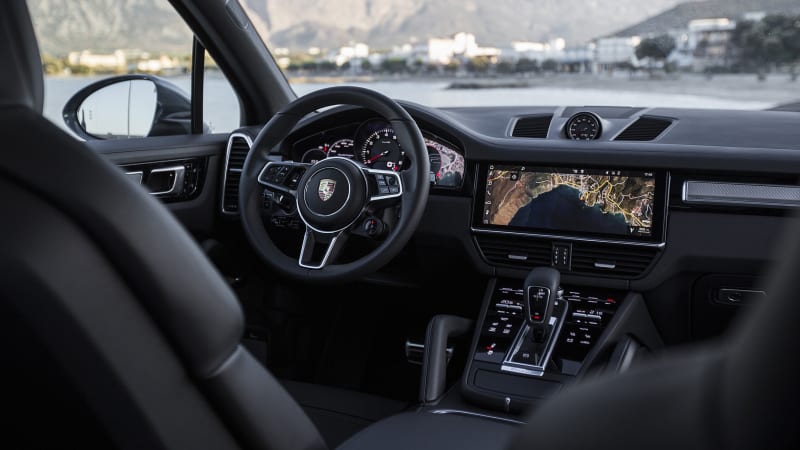 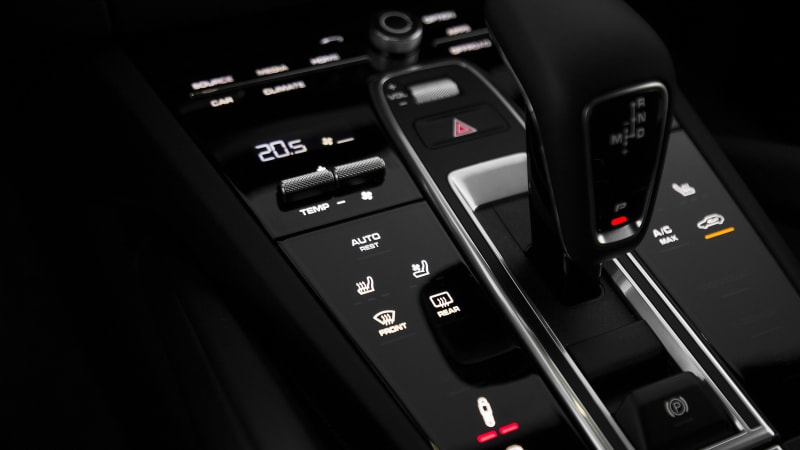 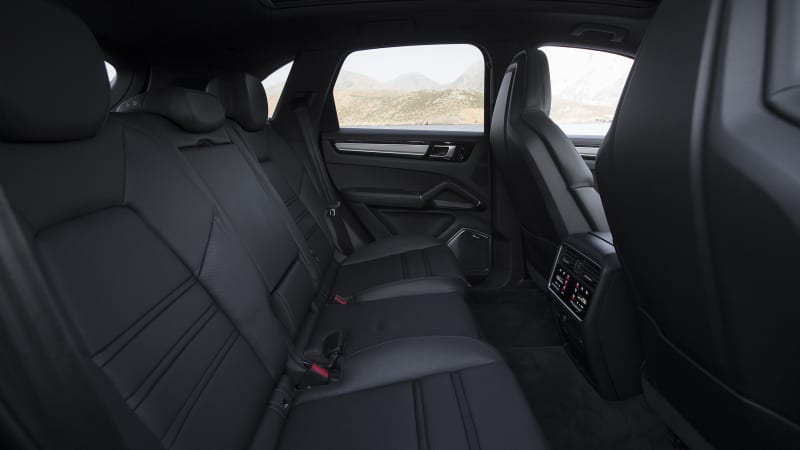 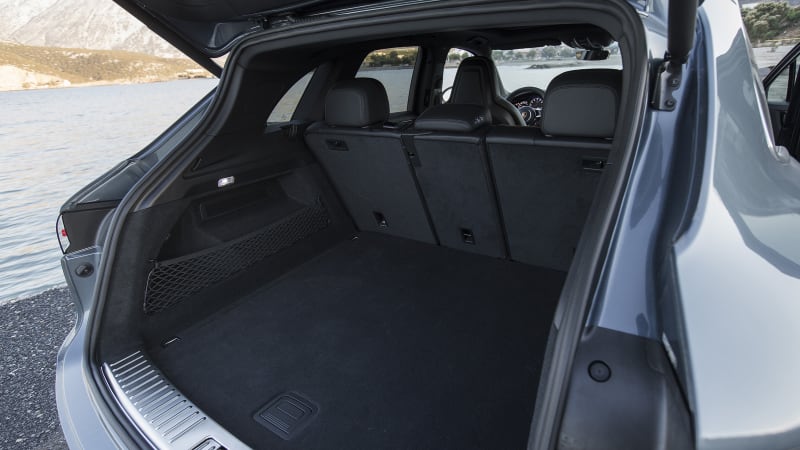 Around town, the eight-speed ZF automatic transmission is more suited to mellow driving than is Porsche’s dual-clutch PDK. Though it inevitably loses something to the PDK in terms of shift speed and snappiness, Porsche’s tuning of this torque-converter automatic has made an excellent transmission better than ever. It exhibits a superior knack for choosing the right gear, and yet when the driver uses the steering wheel-mounted paddles, each shift comes with a significant kick in the pants as the car rushes forward. In Sport+, shifts are fairly abrupt for a torque-converter gearbox, but that’s just Porsche putting its own spin on things — we’re all for it.

Less successful is the Cayenne's automatic stop/start system, which can shut off the engine just before the vehicle comes to halt, making stops less smooth. We didn't experience that in the Turbo, however, and owners who are bothered by it can switch the system off.

Despite the Porsche SUV having a good bit of shared DNA with other members of the Volkswagen Group (it rides on the MLB Evo platform that also underpins the Audi Q7, Bentley Bentayga, Lamborghini Urus and others), it’s safe to say the Cayenne S remains a Porsche at heart. And frankly, the company it’s keeping is hardly embarrassing.

You’ll pay a Porsche-like tab for a car as compelling to drive as this one, but the performance value is there. What’s highly questionable is the options sheet, just as in every other Porsche. Our tester was lightly equipped but still hit $98,500, and it can get much worse for your bank account from there. Don’t expect the same level of luxury and features as a Mercedes SUV for the same price. Driver-assistance features and expensive trim can be had, but prepare to pay more for them than you would in a comparable vehicle. If those things are your priority, then the Porsche isn’t for you. If an excellent driving experience is what you seek in a crossover, the Cayenne S is a good one, and its Porsche badge is fully deserved.