Do you really care about about those missing 7 mph at the top end? There's no such thing as a cheap Bentley. Even though the new-for-2019 Bentayga V8 is $30,000 less expensive than its W12-powered sibling, the twin-turbo V8's $165,000 window sticker still puts it well into the upper echelon of pricey luxury vehicles. Bentley is loathe to compare the two versions of the Bentayga — what parent wants to pit siblings against one another? — but does frame the V8 edition as a somewhat sportier alternative to the full-bore, glitz and glamor W12. Let's examine that line of reasoning.

Under the hood of the Bentayga V8 is a 4.0-liter turbocharged engine that shares most of its bits with the latest Porsche Panamera and Cayenne Turbo. The engine is specifically tuned for use in this new application, with a unique sound signature and a cooling package that Bentley says will keep it running comfortably even in the face of the largest desert sand dunes in the world. The V8's peak of 568 pound-feet of torque hits below 2,000 rpm and stays exactly there until 4,500, with a horsepower peak of 542 at 6,000. 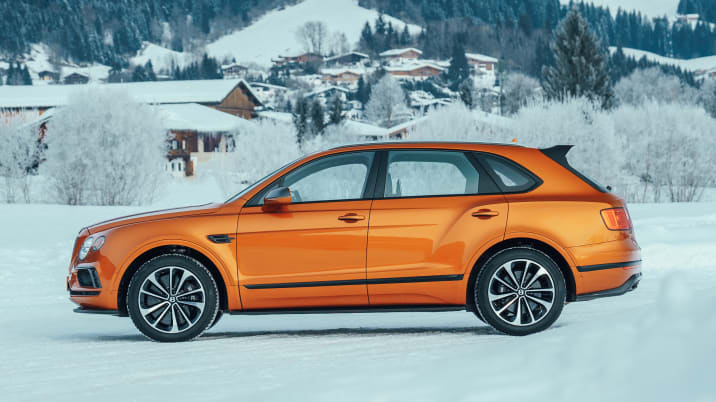 From behind the wheel, the Bentayga's V8 engine feels a bit higher strung than the effortless W12. Instead of instant torque, there's a strong rush of power that builds nicely until it nears its 7,000-rpm redline, the highest rev limit of any engine the brand has ever installed in a passenger vehicle. If such a peaky-sounding engine seems incongruous with the intent of a luxury SUV, just know that there's plenty of stonk available any time the driver decides to push a red-bottomed Louboutin into the plush carpet. It's just a little less than what'd be on call from the W12, but there's not enough of a discrepancy to really matter.

The V8 is a bit less sprightly to 60 than the W12 — 4.4 seconds versus 4.1 — and, with its 180-mile-per-hour top speed, it's a meaningless 7 mph slower at the top end, too. So, that doesn't really support the idea of sportiness. Neither too does the V8 handle any differently than the W12. There's only about a hundred pounds separating the two vehicles, with the new V8 edition weighing in at 5,264 pounds. And since only half of that weight savings is centered over the front axle, there isn't any real change to the Bentayga's driving dynamics or steering feel.

That's not to say the Bentley Bentayga V8 doesn't drive well, it just doesn't drive differently than its more powerful, more expensive sibling. One one hand, that's a good thing – the W12's driving dynamics are excellent – but on the other, we'd love to tell you that the V8 version felt lighter on its feet. In any case, all the inherent capability of Bentley's high-tech electronic chassis control systems mean the V8 is just as good as the W12 when driving on the road, or off it. Or on snow and ice, as you can see in the video below. Stick around after the ice-driving demonstration for closer looks at the interior and exterior features of the latest Bentley SUV.
Bentley's 48-volt electronic anti-roll system is optional on the V8 (it's standard on the W12), and it's a recommended addition. Electric motors react instantly to quell the leanings of the massive Bentayga with nearly 740 lb-ft of instant torque. That much power is necessary, considering the forces at play when 2.6 tons of SUV pitch and sway on 21- or 22-inch wheels and tires. Even with the high-tech anti-roll bits, there's plenty of squat and dive under hard acceleration and braking, though cornering loads are well managed – even quick side-to-side transitions.

Optional on both V8 and W12 Bentayga models for 2019 are the largest carbon-ceramic brakes in the world, clamped by 10-piston calipers at the front. Buyers who want to stick with iron brake discs can choose optional red calipers. Oddly enough, the carbon discs stick with innocuous dark-painted calipers. 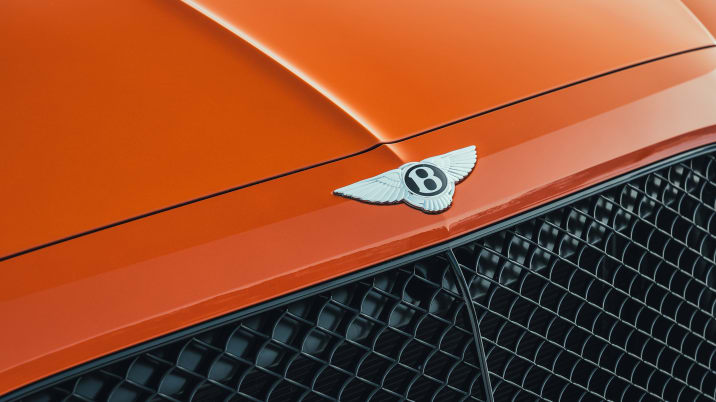 Some may prefer the look of the Bentayga V8 over the W12, since it eschews chrome in favor of dark paint for the grille and gets a unique pair of exhaust outlets with a crimped center to make them look from a distance like four distinct pipes. An optional carbon fiber exterior package adds a rear spoiler to the roof of the SUV, and while such an add-on seems superfluous, it actually looks kind of cool. And that probably matters a lot more than any real-world airflow necessities.

As is the case on the outside, there aren't any major changes to the interior of the Bentayga in this new V8 guise. High-gloss carbon fiber trim is now optional, joining Bentley's usual matte-finish carbon and a whole host of wood veneers sourced from all over the world. As you'd expect from a Bentley, nearly every surface is solid and swathed in smooth or quilted leather or plush-feeling fabric. There are a couple of plastic bits that seem out of place, notably the tube-shaped air duct protrusions atop the center of the dash, but since they aren't touch points, it probably doesn't much matter. We're fans of the Bentayga's infotainment system (even if it is cribbed from the Audi parts catalog), which offers up lovely high-resolution satellite imagery instead of old-fashioned two-dimensional maps.

The two front occupants have plenty of room, and the ergonomics are darn nigh perfect. For ultimate opulence, spec the Bentayga with two rear bucket seats instead of a bench and enjoy the huge center console and electrically operated controls. Either way, the cabin feels bright and airy thanks to a gargantuan clear roof panel. 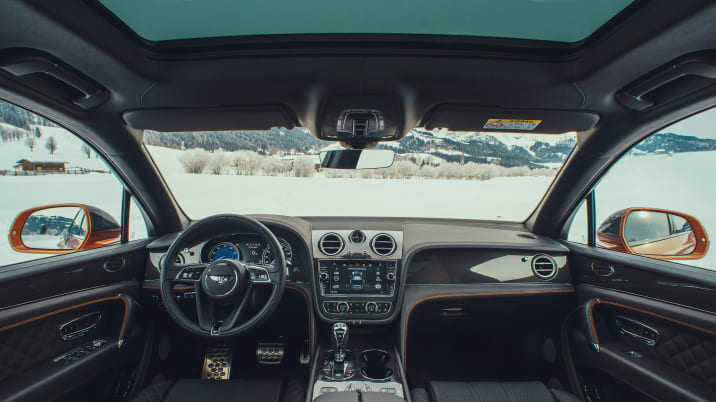 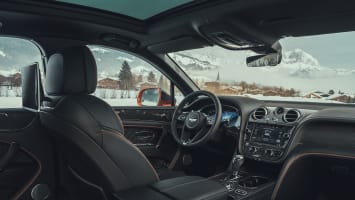 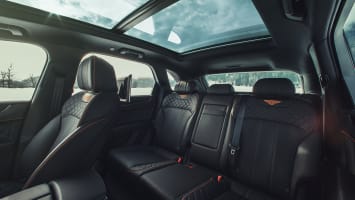 Which Bentayga should buyers choose? That's an oddly tough question. In reality, the V8 isn't as quick or powerful as the W12, doesn't really handle any differently, and even the new 17.3-inch carbon brakes are shared across the line. Put simply, it's not a sportier option, despite what Bentley may claim. But that doesn't mean it's not worth consideration from those who can afford a $200,000 luxury utility vehicle.

The market for super luxurious sport utility vehicles is larger than you may think, and the Bentayga is easily Bentley's best-selling model. Perhaps the closest current rival to the Bentayga is Land Rover's Range Rover SV Autobiography, which starts at $177,200 and climbs from there. Like the Bentayga, the Rover boasts a well-worn badge with a storied pedigree, a super luxurious interior, and legitimate off-road capabilities. Now that there's a lower-priced Bentayga, Bentley stands to gain customers that may have otherwise considered a less extravagant Audi, BMW, or Mercedes. 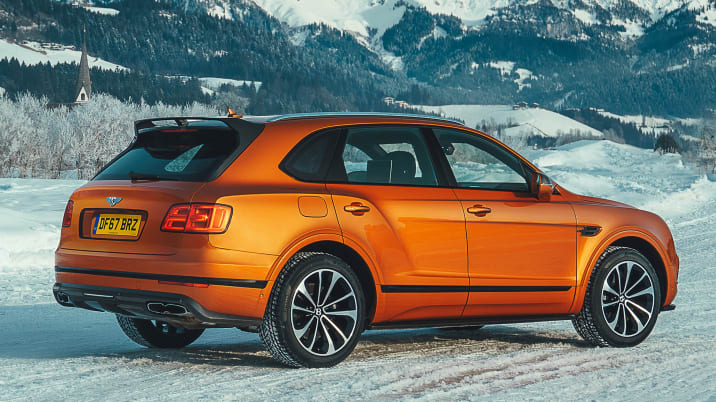 There's so little difference between the two engines offered in the Bentayga that a smart buyer may decide to choose the V8 and put those remaining $30,000 (less, actually, if you choose the active anti-roll system, though the price of that option hasn't yet been revealed) into some optional niceties or even some bespoke customization. If one of the hundreds of optional interior and exterior color schemes isn't to your liking, a quick call to the Mulliner division will earn the buyer a completely unique luxury SUV. And that may be more important to style-conscious buyers than the number of cylinders underhood. Or, considering that $30,000 is right near the average cost of a new vehicle in the United States, a customer could invest that saved money into a Miata, a classic roaster, or even a superbike.

We're not really sure that the choice of engines makes any meaningful difference whatsoever. There's no practical reason to choose the W12 over the V8, but then again there's no practical reason to buy a Bentley Bentayga in any form. You either want one or you don't; you can either afford one or you can't. Pick a powertrain, either powertrain, and you probably won't be disappointed. In fact, you'll get exactly what you paid for: a Bentley badge and a first-class ticket to the front row at the valet lot.