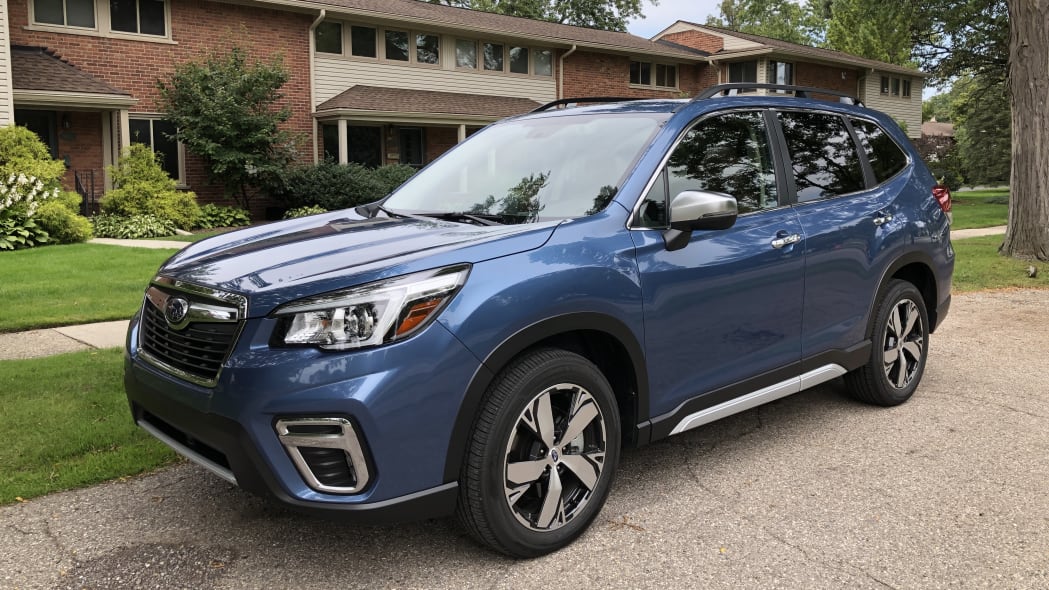 A 2019 Subaru Forester is officially entering the Autoblog long-term vehicle fleet. Subaru completely overhauled the Forester for the 2019 model year, so we’ve snagged one to start a year-long test. The new, small Subaru crossover left quite an impression on us when we drove it for the first time. It was much more refined and advanced than before, even if it doesn’t look that different.

For example, the new Forester adopts Subaru’s Global Platform and a new direct-injection 2.5-liter flat-four engine. The interior gets a massive overhaul with a new design, upgraded materials and impressive technology. What does it lose? The turbo. That's right, the 2019 Forester cannot be had with the outgoing model's 2.0-liter turbocharged four-cylinder or any sort of engine upgrade. We’ll see how much we’re missing the grunt by the time our year is up.

Subaru offers the Forester in five different trim levels, and we got the highest of them all: Touring. This means all the tech and luxury goodies are onboard, but it also means a $35,270 base price after the $975 destination charge is tacked on. All-weather floor mats and a rear seatback protector nudged our car’s final price to $35,495. The other tempting trim option was the Sport, but we decided to pass on the slightly ridiculous red-orange accents — our eyes will thank us. Instead, our Subaru exudes class, or at least as much class as a Subaru can, in Horizon Blue Pearl.

As we mentioned, our Forester comes with the naturally aspirated 2.5-liter boxer four-cylinder. It makes a whopping 182 horsepower and 177 pound-feet of torque. At no point does it feel quick, but it’s not painfully slow either. However, we’re afraid to see what might happen with a full load of people and gear on a weekend getaway. Look out for updates on that one.

As for the extras we get with the Touring trim, there are many. Luxuries include LED headlights and foglights, 18-inch alloy wheels, leather interior trim, a 10-way power driver’s seat, heated front and rear seats, dual-zone automatic climate control, navigation and a Harman Kardon audio system. Coolest of all, is Subaru’s Driver Focus system with the infrared camera mounted on the dashboard, only available on the Touring. It watches your face to make sure you’re alert and watching the road ahead, reminding you to look if it detects your inattention. An added benefit to this is facial recognition, allowing driver profiles to be set. When the Forester recognizes one of our faces, it automatically adjusts our seating and mirror positions to our preferred settings. How nice.

The compact crossover segment is hotter than it ever has been. That sentence was applicable for a long while before this story, and likely will be for a long while after it. Car companies are positively flooding the market with crossovers, and the Forester continues the fight against the Toyota RAV4, Honda CR-V, Ford Escape, etc. This newest version is designed to have more mass appeal than ever before, and Subaru is on a roll even if it just lost its 93-month sales increase streak. Subaru is moving a staggering amount of cars off lots these days, especially in markets like the Pacific Northwest, Mountain West and Northeast where standard all-wheel drive counts for a lot.

We want to know if the Forester is the right crossover to continue that success. In years past, it’s appealed to driving enthusiasts with unique styling, a strong turbocharged engine and even a manual transmission. However, those days are long gone. This Forester, like its predecessor has gone full suburbia, eliminating the driving enthusiast appeal in favor of outdoor adventurer appeal and the mass market. After just a short time with the car, we’ve discovered a superbly comfortable ride and a ton of space for people and gear. The huge windows also make for excellent visibility, something lacking in many new crossovers.

Make sure to follow along throughout our year with the Forester to see what we think of the changes Subaru has made. And yes, there will be dogs.