The changes Subaru made for the new Forester are subtle, but they add up

2
1 Review
View All Specs
1 Review
ASHEVILLE, N.C — Forester sales have been nothing short of spectacular for Subaru. The fourth-generation Forester sold more than double what the first three generations sold ... combined. It makes up about 20 percent of Subaru's current U.S. sales, and 58 percent globally. Clearly, Subaru has been the right thing with the Forester to bring people over to the brand, and to keep them there. So why mess with a good thing?

Subaru hasn't, really. The all-new 2019 Forester looks remarkably familiar – slightly tweaking a few things to refine the experience without alienating buyers. They improved aero while maintaining huge windows. And even the small-outside-big-inside formula that makes it such a practical choice was improved, gaining interior volume with a minimal increase in length and width.

Peel away the sheet metal, though, and there have been significant changes for the Forester, which shares few parts with the outgoing generation. The updated engine gets direct injection. The reworked frame, using more high-strength steel, means it has 1.4 times the impact absorption of the previous car. The geometry of the four-wheel independent suspension has been optimized for stability, the steering retuned, the transmission reworked for better power, efficiency, handling, comfort and safety.

So, can this visually familiar Forester really feel all that different going down the road? More importantly, do we like it better? We headed into the Blue Ridge mountains around Asheville N.C. in order to find out. 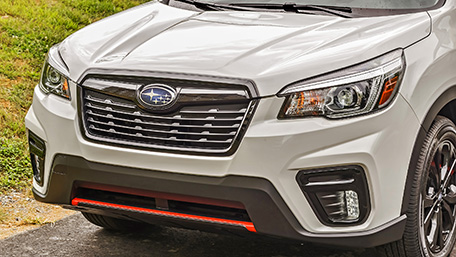 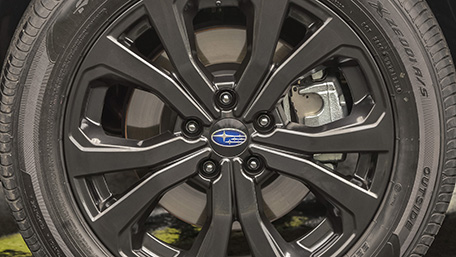 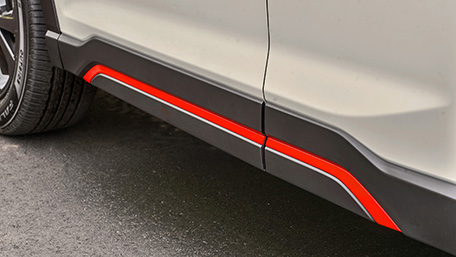 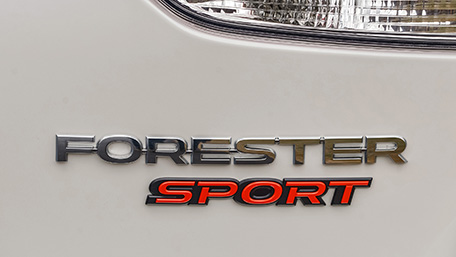 Our first vehicle for the day was the new Sport trim, with no added performance and some funkier design cues. Somehow, matte-ish orange accents have become the go-to hue to represent "sport." They stand out most around the air vents and gear shifter, in the contrast stitching and here and there in the instrument panel. The busy mix of materials and colors might find favor in youthful buyers, but were a bit too flashy for our taste.

Loud as that interior might be visually, sonically the Forester is quite the opposite. We kept the radio off to enjoy, finally, a Forester interior in which we could hold a quiet conversation at highway speed. Depending on the surface, we heard some tire noise, but muted compared to Foresters — and tons of Subarus — of generations past.

In normal, calm driving, the new Forester behaves like a more premium vehicle – calm and comfortable. But behind the wheel, chasing ghosts down the narrow, winding lanes of the Blue Ridge mountains, we found it to be well suited to carrying speed and making small roads feel big. The steering is quick, and pleasantly but lightly weighted. The heft builds up progressively as you approach lock, so it's easy to saw back and forth without too much juggling. The swift, precise response to our handiwork helped us build confidence quickly.

With an extra 1.2 inches in the wheelbase and overall length, it feels nicely stable, but the new Forester also felt calmer and more adept, at least from the driver's seat. While the lane-keep assist feature was active, we didn't trigger the departure warning very often, as the subtle, unobtrusive nudge from the steering wheel generally kept the lines at bay. 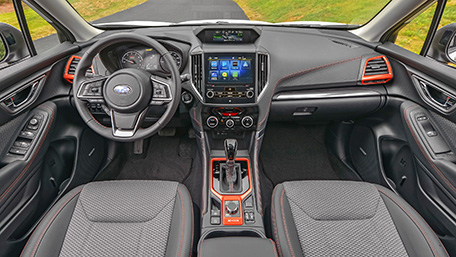 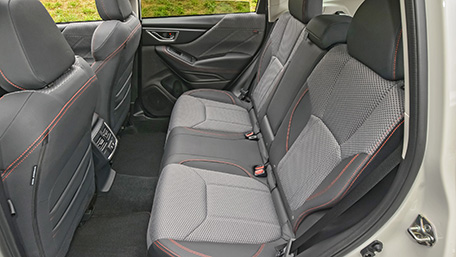 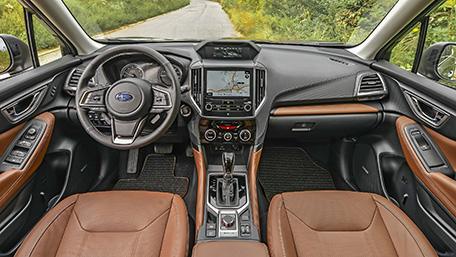 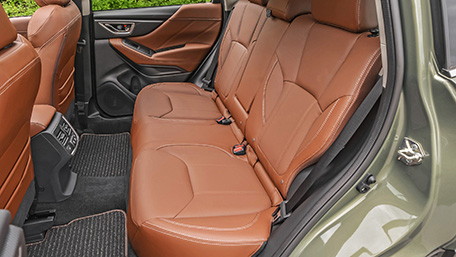 When we hopped in to the right seat to navigate, it reconfirmed our initial impression that this really is a nimble, comfortable crossover. As a passenger, where any failings in ride or roll make themselves more apparent, we were shocked by how little body roll we experienced. Even as our co-driver flogged the car through tunnels of trees, we were able to comfortably scribble notes and flip through our route book to call out our turns. It's impressive what a revised suspension geometry, stiffer body and the addition of torque vectoring can do for a crossover.

The 2019 Forester's updated engine, a naturally aspirated 2.5-liter boxer-four has a higher compression ratio, making 182 horsepower and 177 pound-feet of torque. Compared to the outgoing model, that's a modest improvement of 7 horsepower and 3 pound-feet. While it maintains the same 33-mpg highway fuel economy figure, the city rating improves by one mpg to 27. The same goes for the combined rating, which inches up from 28 to 29 mpg for the new model year.

The engine is again mated to a CVT, and the manual option disappears. The new unit simulates the shift of an automatic transmission with a torque converter by default. We found that the mimicry of a traditional automatic helps makes the transmission's operation fade away into the background. The only time the illusion failed was when accelerating uphill, and even that wasn't too grating in this quiet crossover. 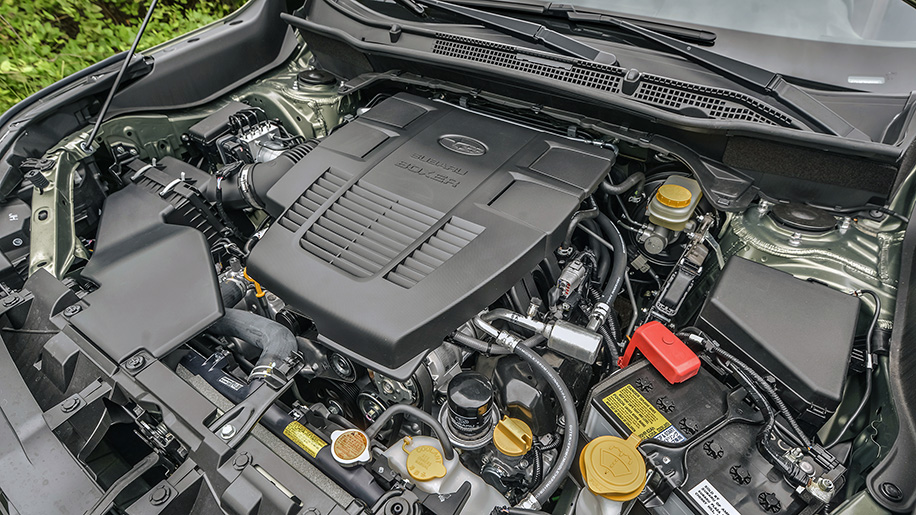 We found the performance of this combination of engine and transmission to be adequate. While we wouldn't want to have any less power — we like the freedom to get around slowpokes — the Forester didn't feel underpowered. What this car does well is provide smooth, responsive and predictable acceleration. Going about 50 mph uphill, the Forester made a few passes with no delay and plenty of oomph. Also, when we switched the SI-Drive (now standard on all Foresters) mode from Intelligent to Sport, the response from the gas pedal was even sharper; often the switch-like response of Sport was too snappy for how we intended to drive, so we mostly left the car in Intelligent mode. This is a crossover, after all.

Gentle reader, we can hear your thoughts right now. "What about the turbo?" you're asking. "Aren't you going to miss it?" The short answer: Yes.

The Forester 2.0XT of yesteryear actually felt sporty with its 2.0-liter turbo-four, and that engine option's absence from the lineup was the first thing we noticed when the 2019 model was announced. It just needed some improvements in its underpinning dynamics to match its 250 horsepower and 258 pound-feet of torque, and it would've been superb. Even though this Forester's an improvement in nearly every way over the outgoing naturally aspirated version, we'll be pouring our 40s out in remembrance of the XT until we either forget about it or until Subaru comes to its senses and offers a turbocharged Forester again. In the meantime, we'll be appreciating the vast improvements and refinements on hand with the 2019 model. 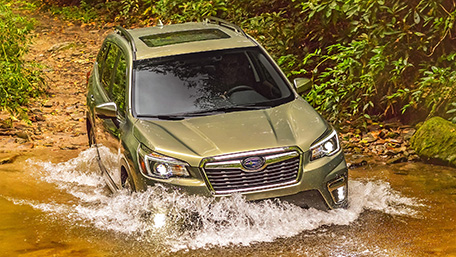 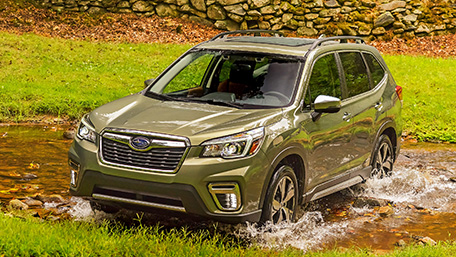 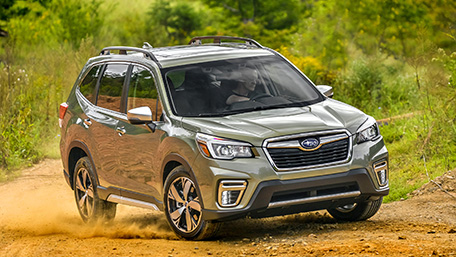 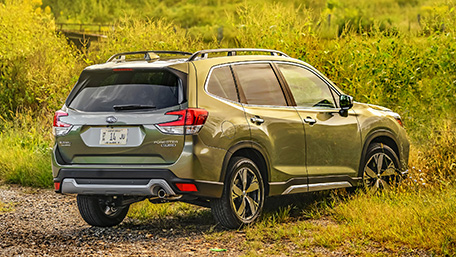 While the area we were driving was largely spared from the punishment of Hurricane Florence, it did get some rain ahead of our arrival. When, at one point, we got to a brief off-road segment of our driving route, we got to drive the Forester though wet grass and mud. At the course, we twisted the X-Mode knob on – now standard on Sport, Limited and Touring, and is optional in the Premium model we were driving at the moment. The system maximizes traction through engine and transmission management, controlling wheelspin and optimizing where the all-wheel-drive system sends power. It also provides hill descent control.

The car, with its 17-inch all-season Falken tires, bumped gently across the soggy grass and ruts confidently, making the most of its 8.5 inches of ground clearance. The trail took us to a short but very steep drop. Once gravity overcame the power of the engine at near-idle, we took our foot completely off the pedals and let the car manage the descent on its own. We watched the multifunction display as the angle increased as high as 18 percent. The approach angle at the bottom of the hill was severe enough to trigger the sensor suite to warn of us of a forward collision with loud beeps, but the car crept calmly forward. From there, we drove off, finished the brief off-road section, and headed back out onto our paved route back to the inn

Of course, there are more changes (like the improved safety features) that can't be evaluated over a day of driving. Still the ones we could test all proved the new Forester to be a notable overall improvement, even if they appear subtle individually. All in, the revisions to the Forester make it stand out as an easy driving, spacious and capable all-wheel-drive crossover. It's more fuel-efficient than most of its front-drive competitors, apart from the Honda CR-V. It's more fun than the Honda, which seems to be the fiercest competition for the Forester, with more power and cargo space.

We love the Forester's ease and AWD adroitness, though, and it's only gotten better with the new model year. It's enough to have us wanting to take it for another drive, and ought to do the same for the brand's loyal and soon-to-be-loyal customers.