Volkswagen ID. Crozz spied testing with its production body for the first time

Our first peek at what VW's ID. crossover will look like 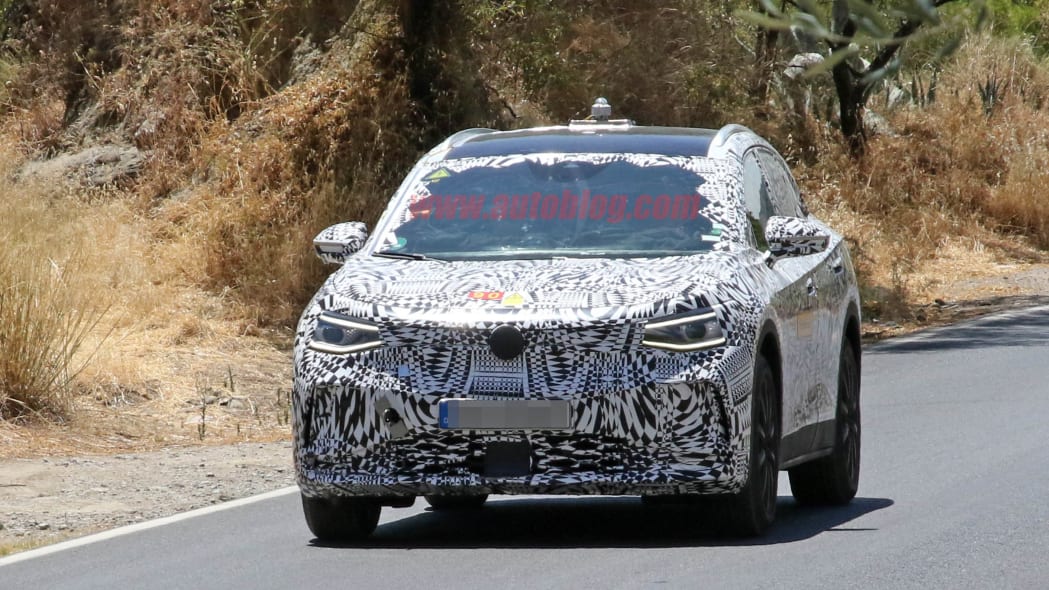 The Volkswagen ID. Crozz is going to be Volkswagen’s first ID series electric car sold in America, and our spy photographers just caught the production body for the first time out testing. This means we finally have a chance to compare it to the Crozz concept Volkswagen revealed a couple of years ago.

Predictably, the production ID. Crozz has toned some of its more extreme parts down. The concept (below) was a fully committed crossover coupe, similar to vehicles like the BMW X4 or Mercedes GLC Coupe. While there is still some rake to the rear window, Volkswagen has adjusted things to make it much more practical for added luggage room. The gently sloping shape of the roof is cut off by a spoiler sticking out over the rear window now, too. It’s difficult to discern the dimensions without any perspective, but it looks to be nearest the Tiguan in size.

The car’s most intriguing element is the concave front grille it’s sporting. Likely, that area is going to be completely covered up by bodywork, but VW appears to have something in mind to turn heads up front. There does seem to be a small opening at the bottom of the front fascia, in addition to some rather dramatic sculpting in the front bumper. Compared to something like the Tesla Model Y, this vehicle is looking far busier than the blank face of the future Tesla crossover.

Volkswagen replaced the rear sliding doors of the concept with traditional doors. No surprise there. Both the headlights and taillights look like rough production fixtures. The LED signature for the DRLs is rather dramatic, and the rear lights are similarly interesting to look at.

Our latest intel for when the ID. Crozz is coming our way claims a 2022 release. That’s much later than what was originally predicted in 2017 with the release of the concept. Back then, VW CEO Herbert Diess said 2020 was probable for production. Now that we actually have eyes on the car in official testing, that updated 2022 release seems to make sense. There’s a long wait yet to come, and we’ll be watching closely to see if Volkswagen is able to hit its predicted timing for launch.