The 2019 Volkswagen Tiguan is Volkswagen's entry-level compact crossover entry, and it's only one of two crossovers the company offers (three if you count the lifted Golf Alltrack wagon). The 2019 is the second model year for this generation of the crossover, which was completely redesigned for the 2018 model year. It follows VW design sensibilities with a crisp but restrained look inside and out. One of its party tricks is an available third-row seat, a rarity among compact crossovers, which is made possible by the Tiguan having one of the segment's biggest interiors. Only one bodystyle is available, and all models come with a turbocharged four-cylinder and eight-speed automatic with a choice of front- or all-wheel drive.

Not much changed for the 2019 VW Tiguan since it was redesigned for the 2018 model year. The top-level SEL Premium trims now come with all-wheel drive standard. A vehicle alarm is now standard starting with the SE trim. The SEL trim now gets standard parking sensors and the Digital Cockpit instrument panel. The SEL R-Design will be available early in the year before being replaced by the SEL R-Design Black that adds black alloy wheels and trim. 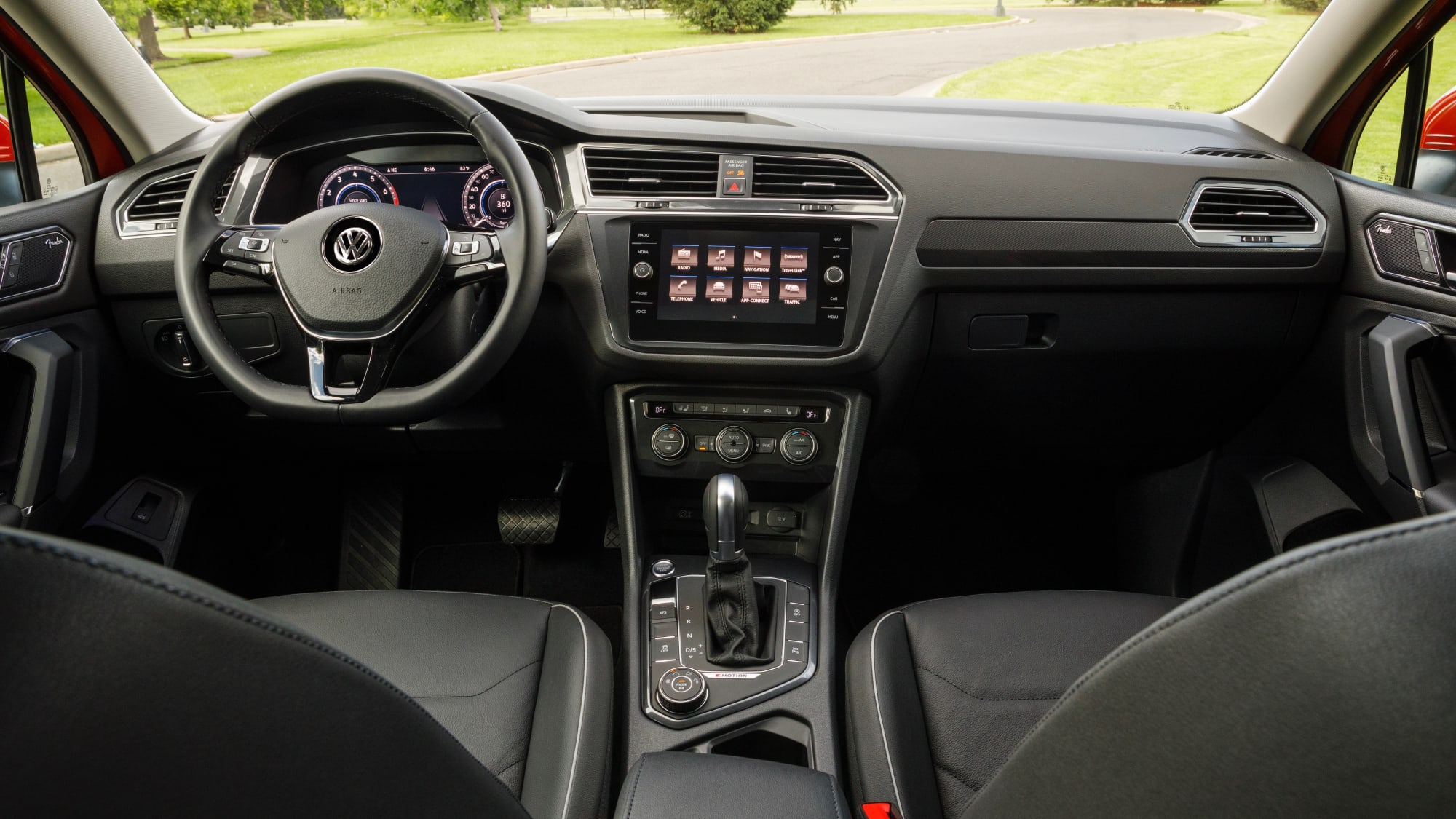 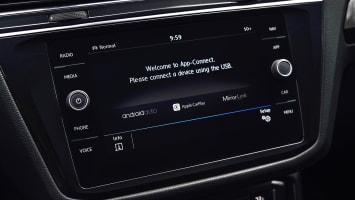 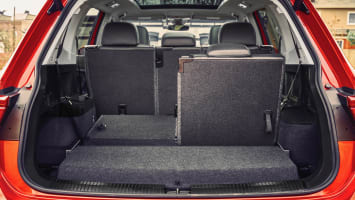 The Tiguan's interior is designed and laid out in a simple manner like Volkswagen's Golf. It's not especially stylish, and some would even call it plain, but everything is easy to use and find, and the materials are of a high quality. As expected for a crossover, the driving position is high, and visibility is phenomenal thanks to a tall roof and low windowsills and dashboard.

Depending on trim, there are 6.5- or 8-inch touchscreens available, but the software and menu structure within them is basically the same. The 8-inch screen, however, does come with touch-sensitive menu buttons around its perimeter rather than 6.5-inch unit's conventional buttons. The interfaces are clean and simple, and the screen is very responsive. Apple CarPlay and Android Auto come standard. Overall, it's one of the better systems available.

Buyers that choose a Tiguan SEL or higher will also be treated to the Volkswagen Digital Cockpit, which is basically the same all-digital instrument panel as Audi's Virtual Cockpit. It's a bright, high-resolution screen that's highly attractive. It operates so smoothly you could be forgiven for thinking it had real dials, but importantly, it places infotainment displays such as the navigation map and audio information prominently in front of the driver. 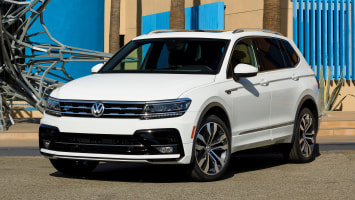 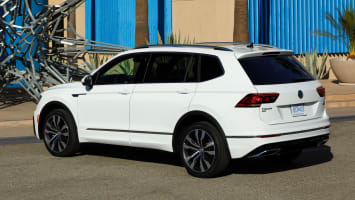 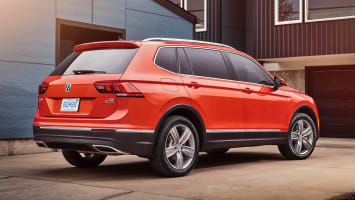 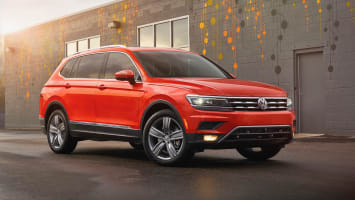 How big is the Tiguan?

The VW Tiguan is the longest crossover in its class, and it matches that with the longest wheelbase, too. Perhaps not surprisingly, then, it's also the heaviest in the segment. Inside, it's a slightly different story. It's indeed one of the most spacious in the segment and you should find lots of family-friendly space, but it's also not a class leader in terms of rear seat or cargo room. It does, however, have an ace up its sleeve: a third-row seat. Although primarily intended for children, and for infrequent use, only the Mitsubishi Outlander and the slightly larger Kia Sorento and Dodge Journey offer three rows in this general size class. Note that cargo space is reduced when you opt for the third-row seat.

Every Tiguan comes with the same turbocharged 2.0-liter inline-four that makes 184 horsepower and 221 pound-feet of torque. Power goes to an eight-speed automatic transmission. The only choice is whether you want front-wheel drive or all-wheel drive. The front-drive Tiguan offers fuel economy numbers of 22 mpg city, 29 highway and 25 combined. The all-wheel-drive Tiguan does slightly worse with 21/29/24 mpg.

Those numbers are on the low side when compared to the base engines of a Toyota RAV4 or Subaru Forester, but keep in mind the Tiguan's considerable extra torque that makes it a stronger performer. In that light, its fuel economy is about the same as the Ford Escape and Mazda CX-5's optional turbocharged engines.

We're happy to report that the Tiguan drives like a big VW Golf. That's not entirely surprising as it shares the same MQB platform that underpins, well, almost every VW, and its engine is a close relative of the 1.8-liter engine in the Golf Sportwagen 4Motion and Alltrack, and the 2.0-liter in the GTI. More specifically, the Tiguan feels impressively light despite being one of the heaviest crossovers in its class. This boosts confidence when hustling through corners or doing the traffic slalom. Steering is light and pretty numb on center, but ultimately precise. There's also a fair amount of body roll, and the ride is on the soft side, but it feels stable and instills enough confidence.

The engine provides enough power that you'll never feel left behind by traffic, and it effectively comes standard with the type of turbocharged performance offered as an option on its rivals (or not at all). The turbo 2.0-liter is quiet at low rpm, but becomes gruff and loud when accelerating hard. It's disappointing when the cabin is otherwise extremely quiet. The eight-speed automatic transmission is smooth and picks gears well, though it's not especially quick to shift.

What more can I read about the VW Tiguan?

An in-depth review of what changed for the Tiguan when it was completely redesigned, including information about its engineering and design. 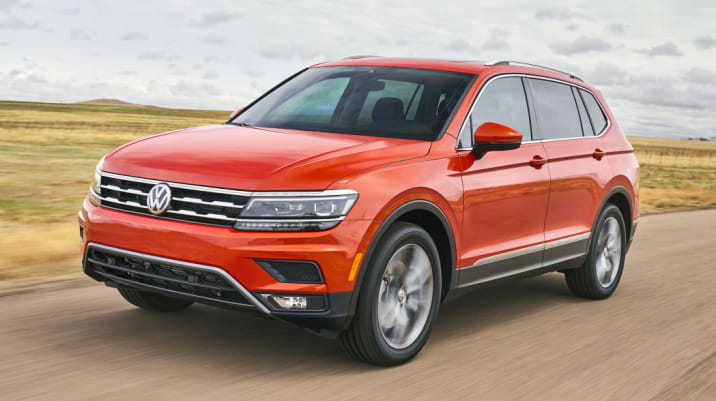 Compact SUV Mega Comparison: How they all compare on paper

A comparison of the specifications of every compact crossover available, including the Volkswagen Tiguan. 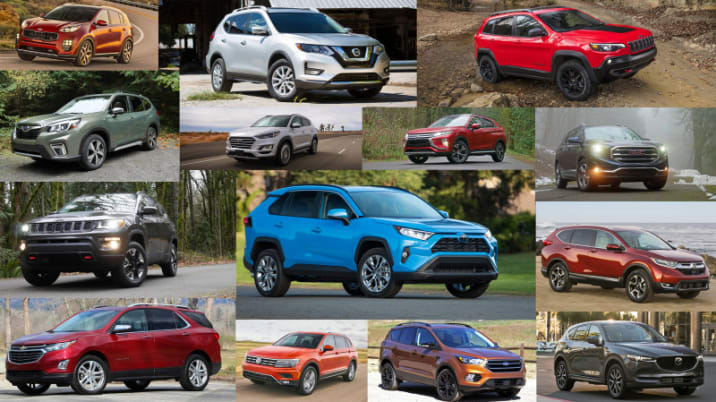 A comparison of the Volkswagen Tiguan's specifications with those of other small three-row crossovers. 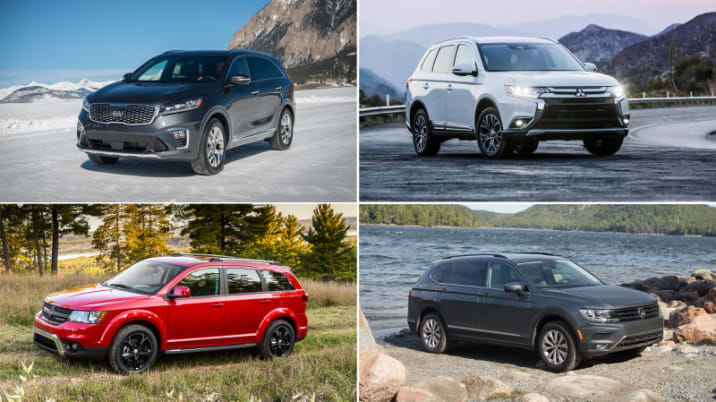 What features are available what's the Tiguan's price?

Pricing for all other trim levels can be found below, but you can check out the complete breakdown of Tiguan features, specs and local pricing here on Autoblog.

What are Tiguan's safety features and crash test ratings?

The Volkswagen Tiguan has received good test ratings overall. NHTSA gives it 5 stars in frontal and side crash tests, with one caveat being that the driver door opened in the side impact test, and it gets four starts for rollover risk. IIHS gave it the highest "Good" rating in every crash test and the highest forward collision prevention score when equipped with automatic emergency braking features. Headlights were only rated marginal with optional lights and poor with standard versions. The child seat LATCH anchors were rated the second highest "Acceptable" rating. 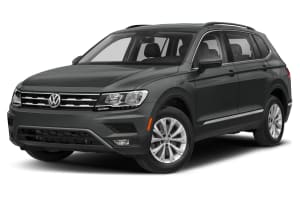