Services like Kango, Zūm and HopSkipDrive can help put your mind at ease

In 2017 Uber made headlines when Colorado state regulators fined the company $8.9 million because the company permitted 57 people to become drivers who had disturbing incidents in their recent pasts.

Many of the drivers had committed serious offenses and some even lacked a valid driver’s license. 12 drivers had felony convictions, 17 had major moving violations and three had a type of driver’s license that indicated they had recent drunk-driving convictions. None of these people had any business driving for Uber, yet all were allowed onto their system.

So much for Uber’s robust background checks. In reality their background checks have always been lax, which should give any parent pause before allowing their minor children to ride with them.

In our last article, we covered some of the pitfalls of using Uber and Lyft as a transportation provider for minor children. Namely, unaccompanied minors are not allowed in their terms of service and there are those ever-present nagging questions about just how safe they really are.

But, there is good news for parents looking for a way to get their children to and from school. New rideshare services are popping up around the country that cater specifically to kids. Many of them have been started by moms who had become increasingly skeptical about putting their kids into an Uber or Lyft after riding in a few themselves.

Everything from unclean to unsafe cars to sketchy drivers aroused these moms’ instincts about putting their kids in an unsafe situation. Turns out, the moms were right. Neither Uber nor Lyft have the capability to safely and reliably transport children. Which is probably why it’s against their terms of service.

Without question, the most important thing when it comes to reliable and safe transportation for your kids is the quality of drivers. Could they pass a background check? Do they have criminal backgrounds? Would they know how to handle an emergency with children in the backseat? Do they even know how to handle children in a variety of situations? These and other issues are far better addressed by these new rideshare services that specialize in transporting minors.

Did you know that Uber and Lyft never meet a driver in person before bringing them onto their platforms? In fact, I drove for both companies for five years and never once met a single employee in-person from either company. To drive for those companies, a person only has to have a driver’s license, auto insurance and a car. They also have to pass what can only be characterized as a very lax background check.

This is where the companies that are catering to kids are really doing things differently — and better. All prospective drivers go through in-person interviews with at least one employee of the companies. It’s hard to stress just how important this is. I can only tell you that I would feel a lot more comfortable putting my children in a car with a driver who I knew had actually had an in-person interview with and was approved by an employee of the company.

These companies also claim to do far more thorough background checks. In addition to that, most of them require that drivers have several years of professional childcare experience. They spend a lot more time and effort interviewing and approving drivers, which, of course, comes at a cost. This explains, in part, why their rates are higher than Uber and Lyft’s. Another reason is that their drivers are better paid, to compensate for the additional experience and skills they’re required to have. The higher price is part of what makes these services safer for your children.

There is no doubt that a safe and reliable rideshare service for kids would be a huge convenience and in much demand by responsible parents. So, let’s take a look at five relatively new companies that are taking on this challenge and how they’re doing it. 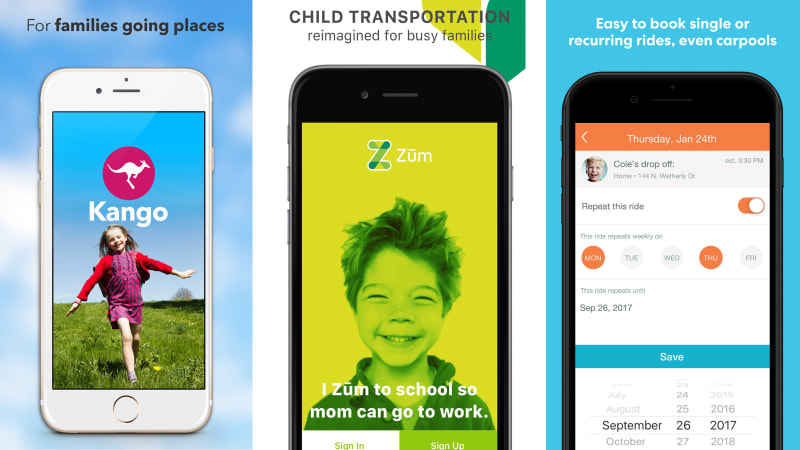 Launched in 2012 as a peer-to-peer carpool service that paired parents up with each other, Kango was converted into a rideshare for kids app in 2015. Today it operates mainly in the Bay Area around San Francisco and in parts of Los Angeles. They do a standard background check on their drivers, but there’s one important additional step they take that has been proven to significantly increase the accuracy of those background checks: They fingerprint each of their drivers. This is something Uber and Lyft have always adamantly opposed doing.

In their early review of candidates, Kango does an initial background check that looks back seven years. For drivers who pass the initial checks along with meeting several other requirements, they then move onto the next step. That next step includes another background check that looks back 18 years as well as fingerprinting and a name-check through a child abuse registry.

They also require drivers to pass an in-person interview as well as attend an in-person training program. They will immediately remove any drivers who use a mobile device for texting or talking while they have children in the car. And like most of the other kiddie rideshare services, they require several years of childcare experience. They also now offer babysitting services as well.

Kango also promises drivers they will make $35 an hour. Whether this is before or after they take their commission is unclear. But either way, this is far better pay than Uber and Lyft offer. It also means higher prices for parents. But those higher prices pay for better trained and more qualified drivers for your kids.

Zūm is “on a mission to build the world’s largest and most trusted platform for transportation and care for children.” Which probably sums up the aspirations of all these new-ish kiddie ride companies. Which one will actually achieve that goal remains unknown, but Zūm, like the others, is making a great effort. Also like the others, they have a vigorous vetting system for drivers.

Drivers are required to go through several steps in the application process. First, they fill out an application online. If that meet’s Zūm’s exacting standards, Zūm will call them the same day to setup an online meeting. If they pass the online interview, they will move on to an in-person interview at one of Zūm’s local offices. In addition to passing the standard criminal and driving-record background checks, Zūm drivers must be certified by TrustLine, which is a database of nannies and babysitters that have cleared criminal background checks in California — which is where Zūm operates. They are also checked to ensure they don’t show up in any sex offender records.

Like Kango, Zūm’s background checks far exceeds anything provided by Uber or Lyft.

Zūm, which started in California, now operates in Arizona, Texas, Illinois and Florida.

This company operates in northern and southern California, as well as Colorado’s Front Range and the Washington DC/Virginia area. And like the others, they have a thorough vetting system for drivers.

Rides with these specialty rideshare companies can be quite expensive, especially if you’re a parent with more than one kid and use them more than once a week. With that in mind, HopSkipDrive has come up with a less-expensive carpool option. You can setup a carpool with up to four families. If you share the ride with one other family, you can save up to 60% off their normal rates.

Their rates aren’t much higher than Uber and Lyft for single-family rides, but there is an $18 minimum per ride. With four families, the minimum charge is lowered to just $7 per family.

HopSkipDrive, like some of the other services, also lets parents pre-schedule rides up to eight hours in advance. They can also schedule recurring rides.

Autter is another kid’s rideshare company founded by moms. While most of these companies are based on the West Coast, Autter is based in the east — in Atlanta, to be exact.

Autter’s rates are a very reasonable $1 per mile and $0.50 per minute. You can also buy multiple rides for a discount.

One of the founder moms assured me personally that they have a rigorous vetting process for their drivers, which includes not only the standard background checks but an in-person interview with an employee of the company. However, they don’t say anything about this on their website. I suggested to her when we talked that they might consider putting those details on their site, but they still haven’t. Which, honestly, makes their exact vetting process a little mysterious and therefore questionable.

goKid has taken an interesting twist on the kiddo transportation model. They have taken on the peer-to-peer model that Kango dropped in 2015. Instead of pairing parents up with staff drivers, they pair them up with other parents whose kids are going to and from the same events and locations. For instance, say your child is going from school to a soccer practice. You enter in the school name and team name. By integrating SportsEngine and TeamSnap, the needed details such as times and locations will usually be filled in automatically.

The service can be setup to automatically sync with your calendar as well as to add notifications and reminders. Members of any given carpool can send messages and reminders to other members. And a coming-soon feature will allow parents to see the location of the car during the trip.

Otherwise, the app could be used to pair up with parents they don’t know. In that case, those parents are not vetted in any way by goKid, and that could prove worse than using poorly vetted Uber and Lyft drivers.

The only charge for goKid is for the use of the app itself.  You can pay either a flat fee of $4.99 per month or $49.99 per year. There is also a free version that has all the basic components necessary, dropping in-app notes, carpool history and Google calendar synchronization.