Jonathon Ramsey
Lexus is back at it with innovative lighting technology. The BladeScan headlights available in Europe on the 2020 RX utilize a new mechanism for throwing light further down the road, aiming that light more precisely, and doing so without blinding other road users. Lights from other OEMs with the same capabilities have increased the number of LEDs inside the housing for finer control. The BladeScan module inside the Lexus lights holds the number of LEDs down to 10 on each side of the RX, which Lexus says is a more cost-effective solution. In fact, BladeScan uses fewer LEDs than Lexus' most recent adaptive high-beam system, which has 24 LEDs on each side.

The LEDs in the new module are arranged in two rows, eight on top, two on bottom. The diodes are fed information about objects ahead, and adjust their intensity to dim light aimed at an oncoming car, or illuminate a pedestrian by the roadside. However, the LEDs don't shine their light down the road, they shine their strobing light onto two blade-shaped mirrors — hence the name BladeScan — that rotate at high speed. The light reflects off the mirrored blades and into a lens, which orients the beam down the road.

Not only is the reflected light easier to handle for oncoming drivers, the system has aim accurate to 0.7 degrees. Lexus' current adaptives are accurate to 1.7 degrees, making BladeScan a 143-percent improvement. That means the new feature can throw even more light into areas that are hard to reach with current lights — Lexus says pedestrian recognition at night has increased from 105 feet to 184 feet.

Buyers of the 2020 RX will be able to take advantage when the new crossover goes on sale in Europe later this year.

Naturally, U.S. Federal Motor Vehicle Safety Standard No. 108 means we won't get BladeScan — that goes for you, too, Canada. The now-52-year-old U.S. law mandates a single low beam and a single high beam setting, with no intermediate settings and no activation of high and low beams simultaneously. Toyota, Audi and BMW have been trying for six years to get FMVSS 108 changed to permit new and potentially lifesaving headlight technologies. The automaker wrote in a statement to Carscoops, "Last December, Lexus submitted a petition to NHTSA to allow ADB in the United States. Currently, we await the Agency's decision and hope to see an amendment in FMVSS 108." 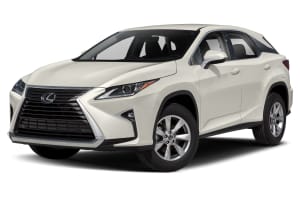