It's not as silly as the Durango SRT, and it hustles and hauls

Editors' Pick
View All Specs
3 Reviews
PORTLAND, Ore. — Is there really a market for a vehicle like the 2020 Ford Explorer ST? It's a three-row family crossover with 400 horsepower, high-performance brakes, a firm suspension and a "top speed target for track drivers of 143 mph."

Well, Ford is certainly about to find out, because there's really nothing like it out there. Oh sure, the Dodge Durango SRT exists, but there's always been something tongue-in-cheek about that. Dodge pairing its family crossover with its 475-horsepower Hemi V8 was a matter of "sure, why not?" since the two could go together with relatively minimal effort. It's pretty much an exercise in glorious absurdity.

The Explorer ST, by contrast, takes itself very seriously. Part of the reason is a curb weight that undercuts the Durango by more than 800 pounds. Think about that. You could burden the Explorer ST with four extra, average-sized people and still not surpass the Durango with a solo driver. The Ford is also considerably wider at 78.9 inches (versus 75.8) with a comparably wider track (66.9 versus 63.9), while its overall height is nearly 2 inches shorter. From a dimensional standpoint, it's pretty clear which of the two has the potential to be an athlete.

Except, of course, we're still talking about a three-row family crossover here. Just because the Explorer ST is wider, shorter and lighter than el Durango gordo doesn't make it a Mustang. It's still 16.7 feet long and weighs 4,701 pounds, which is 400 pounds more than the four-cylinder, rear-wheel-drive Explorer XLT that feels notably lighter on its feet. Yes, the ST is much quicker and handles far better than the typical family crossover, but that's really the bar it has to clear. 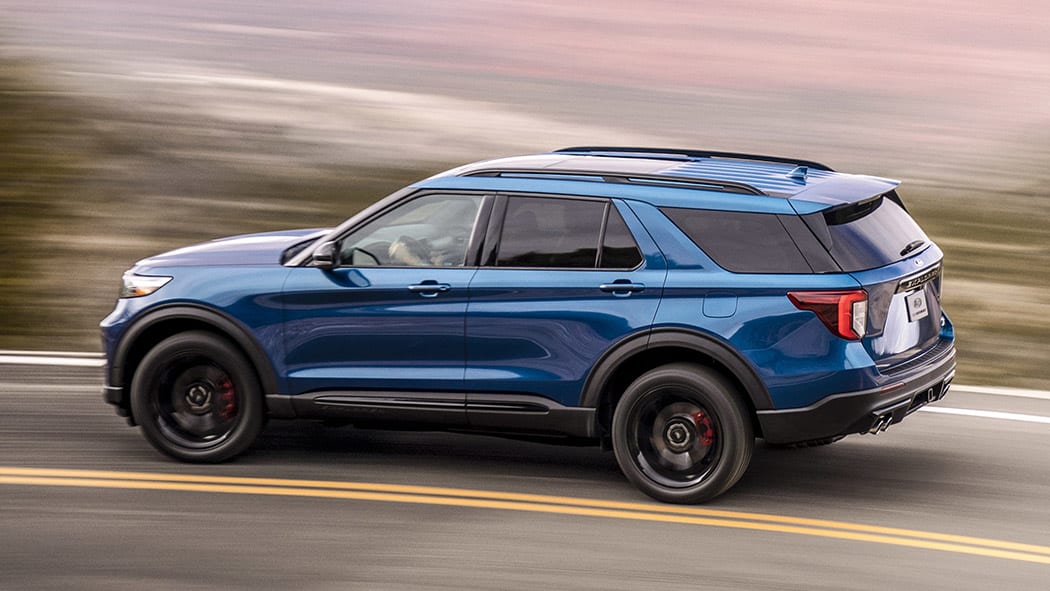 And on the winding roads overlooking the Columbia River Gorge in southern Washington, the Explorer ST did indeed demonstrate substantially better body control than the springy regular Explorers that bobbed about over road undulations and rolled through corners. If you're looking to hustle your three-row family crossover along, having the Explorer ST's firmer, specially tuned dampers and springs is certainly appreciated.

At the same time, its ride quality is impressively compliant despite 21-inch wheels and a firmer suspension than a stock Explorer. You don't feel every pebble on the road's surface, and broken pavement doesn't send shock waves through your spine. This is particularly impressive since there are no fancy adaptive dampers. Consider the suspension a job well done, then.

The specially tuned steering, on the other hand, isn't as responsive or relatively feelsome as we've come to expect from Ford. It feels disconnected, and it's not precise enough. Even worse, while Sport mode apparently tightens up the steering, we found it difficult to tell a difference. At least the ST's special steering wheel creates the illusion of sportiness with its small diameter and girthy grips at 3 and 9. It's a little over-the-top, but then so were BMW's M sport steering wheels from a few years back.

There are some large, sporting vehicles that manage to shrink around you, helping you forget you're driving a behemoth. The Explorer ST does not. That's not necessarily a bad thing, but let's dispense with the notion that anyone is going to be using these things on the track, or carving up mountain roads. It's nonsense. 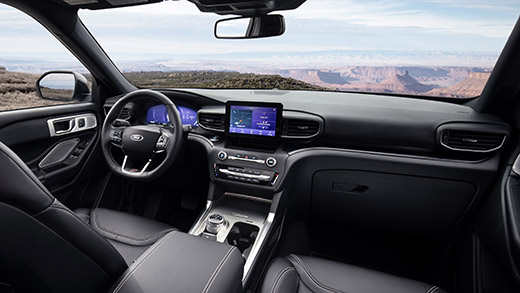 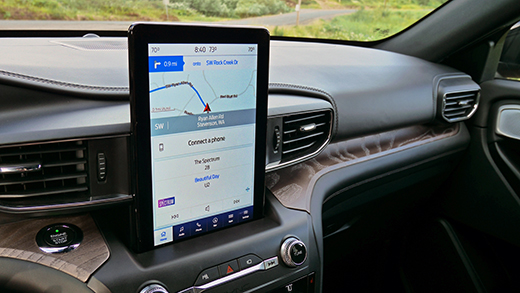 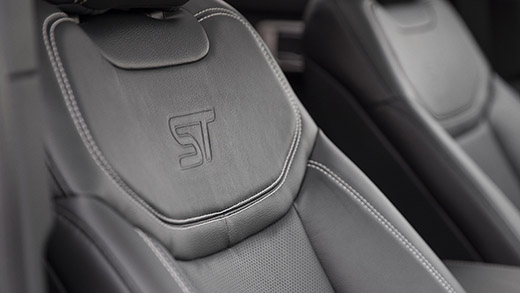 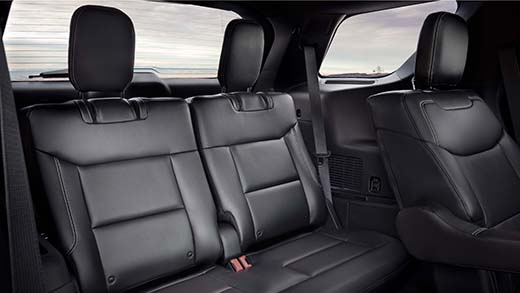 Instead, if there is a market for the Explorer ST, it has to come as a result of two elements. First, there's the styling, which is enhanced with special wheels, quad exhaust outlets and a handsome glossy black mesh grille insert that really makes the Blue Oval and red ST badge pop. A jumbo EXPLORER is emblazoned on the grille in gloss black, which similarly finishes the mirrors, roof rails and rear valance above the license plate. The latter element looks too much like regular old black plastic, though, particularly on our silver test car. That, along with the dark wheels, give it a strong whiff of cop car. Get it in a different color, and the ST definitely looks cooler than the regular model. Inside, you get that fat wheel and ST embossed on "sport bucket seats" (that didn't seem too different from those in the regular Explorer). Those broad of beam will still fit quite comfortably.

Second, and most important, the ST boasts some serious firepower under the hood. Its 3.0-liter twin-turbo V6 produces an eye-opening 400 horsepower and 415 pound-feet of torque, which Ford says will be good enough to get the Explorer ST from zero to 60 mph in 5.5 seconds. That's certainly quick for a three-row crossover, and we have a suspicion it might be a bit quicker than that, but the Durango SRT has also been clocked at well under 5 seconds. Heck, Car and Driver clocked a 280-hp Honda Passport at 5.8.

We described the Explorer Platinum, which has a version of this engine detuned to "only" 365 hp and 380 lb-ft, as bonkers. While the ST doesn't feel appreciably quicker without the aid of a stopwatch, it's still bonkers for a three-row crossover. With all that low-end torque, off-the-line acceleration is vicious and effortless, as the standard all-wheel-drive system and uniquely calibrated 10-speed automatic send power to each of the four optional summer tires. Accelerating out of turns or increasing speed from 30 to 50 mph is similarly exuberant. 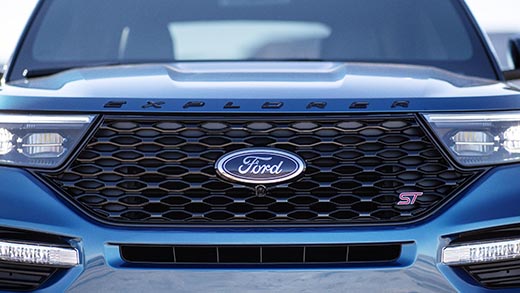 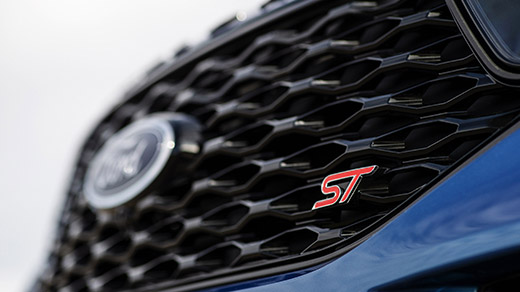 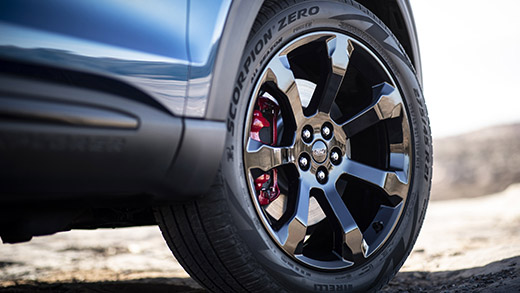 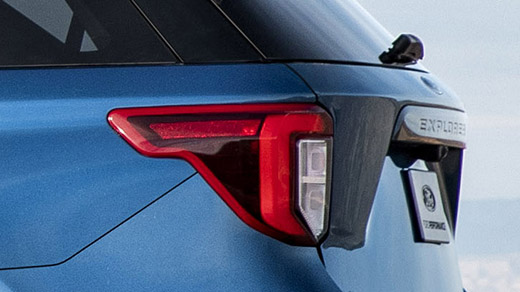 However, throttle response should be sharper, and it doesn't have the soundtrack to match its thrust. There's nothing interesting coming from those quad exhausts, nor from the audio system speakers that pipe in fake (but generally convincing, at least at full whack) engine noise when the car is in Sport mode. The gruff, growly V6 tone does not inspire lust. It sounds more like the pedestrian GM 3800 V6 from the 1990s than Mustang GT. Even worse, in normal casual driving, the fake noises have a certain Gran Turismo quality to them.

Really, the Explorer ST is stuck somewhere between an actually serious performance machine and something gloriously absurd like the Durango SRT. If it was closer to the latter, if it wasn't so serious, maybe the exhaust would crackle and pop, or the fake engine noise would've been recorded from the back end of a GT 350's Voodoo V8. Maybe you could get a rear-wheel-drive version, or a Focus RS-like Drift Mode for the all-wheel-drive system. Maybe it would be available in Grabber Green. You can move it in either direction on the spectrum — just turn up the volume.

To be fair, though, it could be worse. Ford could've firmed the suspension to teeth-chattering levels. It could've ripped out the third row and all the luxury goodies to save weight. Such a thing still wouldn't have been a track machine and now it would be a lousy family vehicle. So in that sense, the Explorer ST find the compromise between comfort, utility, and a performance image, even though it takes itself too seriously. 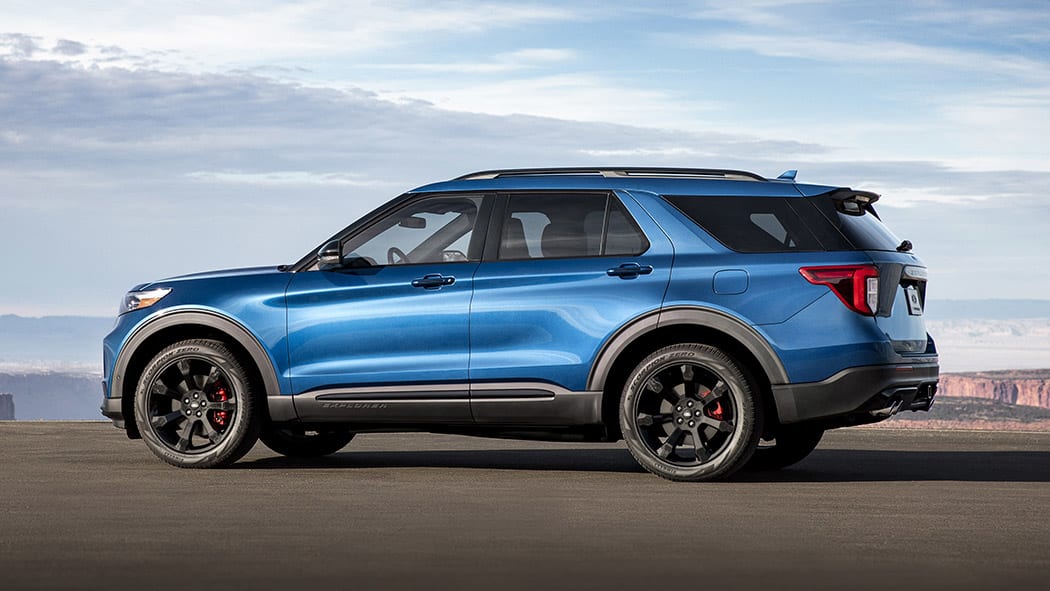 Perhaps it's better to think of the Explorer ST as a sportier variant of the luxurious Platinum trim level, offering most of that trim's equipment with more power at a lower price, than a purebred performance machine. Starting at $55,835, the ST only misses out on the $59,345 Platinum's panoramic sunroof, adaptive headlights, power-folding mirrors and leather-wrapped interior surfaces. The ST therefore seems like it offers better value, since it still shares the vast majority of luxury content like the 12-speaker B&O sound system, heated and cooled seats, all the Ford Co-Pilot360+ safety and driver assistance technologies, and the snazzy 12.3-inch digital instrument display that changes its design based on drive mode. You can also equip the optional 10.1-inch, vertically-oriented touchscreen. It'd impress your friends, but it really doesn't offer much improvement compared to the standard 8-inch unit. We recommend skipping the larger infotainment screen.

It's also a three-row family vehicle, and even though its rear rows aren't the most spacious in the segment or the greatest in seat number, they can fit adults and grown teens with agreeable comfort. The ST can also tow the same 5,600 pounds as the Platinum, albeit with even greater vigor thanks to its extra power. For shoppers looking at three-row crossovers, it therefore delivers without overtly sacrificing comfort. The question remains, though, are people actually looking for such a family vehicle at this lofty price, done up in this particular high-performance way? We have our doubts, but without any sort of precedent, we'll just have to wait and see.