We just caught a next-generation Ford F-150 prototype testing on public roads, and now we've caught another. This one gets some massive 22-inch wheels, and there are a couple interior shots to boot.

Sadly, those two interior photos don't actually give much of anything away, as Ford has nearly everything covered up. The only part visible is the top of what we'll assume is the infotainment screen. We can't see how far the screen extends downward, but we're sure it'll be a large one. As of now, nobody has an answer to Ram's mammoth 12-inch infotainment display, but given the similar vertically oriented screen in the new Explorer, we wouldn't be surprised if it ends up in the next-generation F-150.

Such a screen would likely end up in a luxury trim, which is exactly what this truck seems to be given the massive 22-inch wheels. They fill up the wheel wells to a degree not seen on the previous F-150, but the full-luxe truck affect isn't there with all the camouflage in place. Nearly everything else looks similar to the lower-trim F-150 we saw previously. A unique element we'll note again is the continued presence of the roof spoiler. A lip of that size is not a regular sight on full-size pickups and we assume it's an aerodynamic element intended to improve fuel economy.

This truck has different mirrors than the last one we saw, but despite their disparate size and shape, they share a common new hinge design. This could be evidence of a new telescoping tow mirror mechanism.

Viewing angles of the underbody are good enough to confirm what we saw on the previous shots. A live rear axle and leaf springs will continue to be the go-to on traditional gasoline-engine F-150s. The electric F-150 is the one getting an independent rear suspension design, which we saw not too long ago. As of now, Ford hasn't let on when the next F-150 is to be expected. It could be a 2021 model year or 2022 model year truck. We're sure the details will make themselves known over the coming months and years of development work. 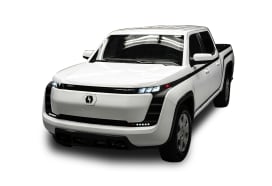