We didn't get a look at the rear end the last time around, and that's the biggest surprise in these shots. The typical solid (or "live") rear axle is gone, replaced by an independent rear suspension and differential that's very similar in its basic design to what the company uses on a number of products, from the upcoming Lincoln Aviator to the Ford Mustang.

An independent rear suspension makes a lot of sense in an electric pickup truck. The regular F-150's live axle is suspended on leaf springs, which extend quite a bit forward and back. Replacing them with an independent rear means that there's less intrusion into the space in front of the axle, and more room for a battery pack. You can get a sense of where the battery pack is in this truck by looking at the dark space looming underneath the chassis, extending roughly from the back of the cab to a place in line with the door mirrors. It may extend upward and further to the front or the rear as well, but obviously we can't see that from these photos. 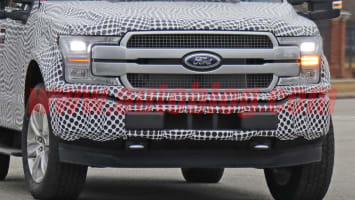 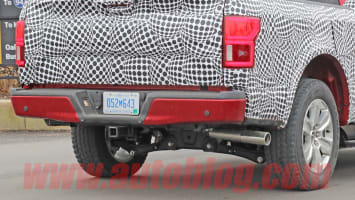 The tailpipe? Almost certainly fake. The spy photographer caught some video of the truck, and it slid by silently. Could it be a hybrid? That's possible, but the one we saw previously had dual exhausts and a traditional solid rear axle. We think the live axle makes that truck much more likely to be a hybrid, for reasons of packaging and capability.

An independent rear axle almost certainly has implications for the ultimate capabilities of an electric F-150. But the 2019 Expedition, properly equipped, can haul up to 9,300 pounds with its EcoBoost V6 sending power to a very similar independent rear end, so the physical design of the rear axle isn't necessarily a major limitation. It's more likely that this is a packaging consideration. And if anything has a real impact on an electric F-150's capabilities, it'll be the weight of the battery and the range degradation that towing will cause. It is entirely likely, perhaps inevitable, that an electric F-150 will have lower towing and payload ratings than the chassis itself could otherwise handle.

It's possible that Ford could surprise us and reveal a different type of EV, or show us an F-150 EV with specs similar to its gas-powered counterparts, but don't hold your breath. Even so, a mass-market EV pickup is a tantalizing prospect, and we're excited and hopeful that this mule represents that possibility.