The 2019 Chevrolet Bolt has been on sale for a few years, and when it was introduced it was one of the cheapest long-range EVs around. It's marketed as a small crossover, but you could fairly call it a compact hatchback. Its range is still superb; its EPA estimate is 238 mile on a full charge. It also drives well enough, is incredibly roomy inside, and is one of the few inexpensive EVs that is (mostly) built in America – its driveline is built in South Korea, but final assembly takes place in Michigan. There are some downsides: the cargo area is small, and the interior materials and fit and finish are disappointing. With new challengers in the form of the Nissan Leaf Plus, Hyundai Kona Electric, and Kia Niro EV, the Bolt's once-formidable range is no longer a unique selling point.

Not a lot. The major mechanicals and interior features haven't been changed for this model year, so there's a short list of things to cover. For one, the color palette has changed slightly, so there are several new colors – Green Mist Metallic, Shock (a very bright green), and Slate Grey Metallic – and several that have gone missing – Arctic Blue Metallic and Orange Burst Metallic.

There are also some new features for the Bolt through the myChevrolet app on iOS and Android, incorporating some new features from partner charging networks EVgo, ChargePoint, and Greenlots, giving drivers more information about charging stations through the Bolt's infotainment system. Remember, the Bolt doesn't offer built-in navigation even as an option, so you can't use the infotainment system to find a charging station unless you have a smartphone on board. That makes these app improvements all the more valuable to Bolt drivers. 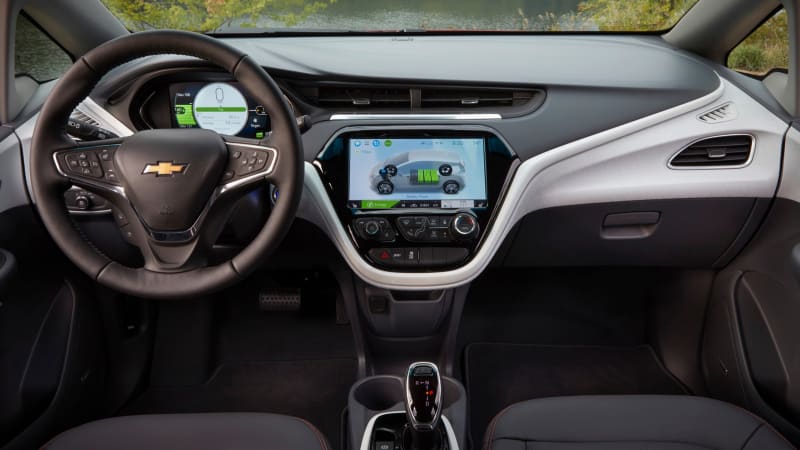 What are the Chevy Bolt's interior and in-car technology like?

The Bolt's interior is remarkably packaged, emphasizing passenger space at the expense of cargo room. Four adults can fit comfortably inside, and there's enough room for an adult to sit up front with a large rear-facing child seat behind. That said, the cargo area's size and shape may make it difficult for families hoping to haul bulky items like strollers.

The thin front seats can also be unsupportive, with sparse cushioning stretched over a seat frame that can dig into the shoulder blades of some front passengers. The bench-style rear seat isn't very contoured and can be tiring to sit in for long stretches. That said, the low front sills make stepping into the Bolt a breeze, and the high greenhouse is surprisingly airy. In terms of quality, the cabin materials and fit and finish are lower than even the disappointing GM norm – hard plastics, large gaps and rough edges. It looks OK, but there are nicer environments found in the Hyundai Kona, Kia Niro and Nissan Leaf.

The Bolt, as mentioned above, doesn't offer onboard navigation, which makes using a smartphone virtually a requirement if there's a chance you'll need to find a charging station along an unfamiliar route. The 10.2-inch touchscreen is big and bright, as is the crisp instrument panel. It offers many of the EV-specific features, like energy consumption, that you'd expect. Apple CarPlay and Android Auto are also included, and OnStar is available for a subscription fee.

How big is the Chevy Bolt?

Despite being marketed as a small crossover, the Bolt is really just a tall, compact hatchback. And while it is diminutive overall – 164 inches long on a 102.4-inch wheelbase, which is about a foot shorter than a Leaf – it offers a good amount of interior volume for its footprint. Chevy puts the Bolt at 94.4 cubic feet of overall passenger volume, and 16.9 cu. ft. of cargo volume – slightly more passenger volume and a fair bit less cargo volume than the aforementioned Leaf and its subcompact SUV competitors from Hyundai/Kia. That squares with what you experience inside the Bolt – a spacious cabin with a slightly cramped cargo area. That said, as long as the back's not already full of stuff, there's plenty of room back there for a large grocery run.

As a commuter and occasional people-mover, or for families who pack light, the Bolt is pretty ideal. It might be tight for two-kid families with lots of stuff, however. 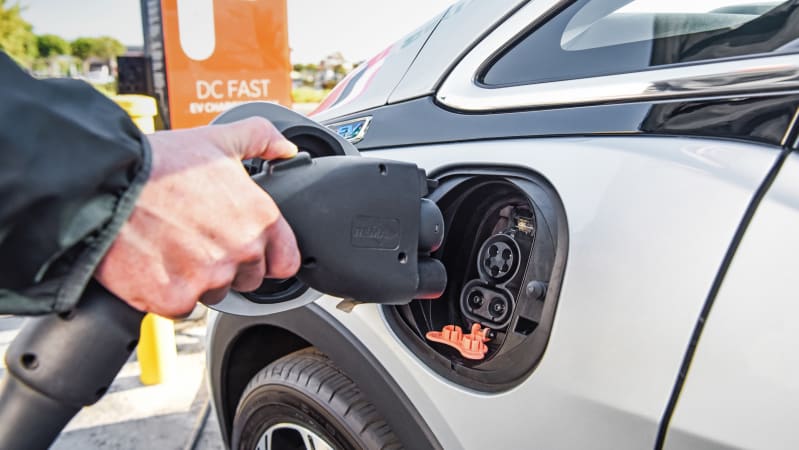 What is the Bolt's performance, range, and fuel economy?

Like any EV, the Bolt feels peppy at low speeds. The 0-60 time varies a bit depending on state of charge, but assume it's between 6.5 and 7 seconds, which is pretty quick for a vehicle in this size range. Motivation is provided by a single permanent-magnet electric motor with a 200-horsepower (150 kW) output, putting power through a single-speed transmission. Its 60-kWh battery provides an EPA estimated 238 miles of range – one of the first relatively affordable EVs to provide that kind of range number, although several competitors now provide similar numbers.

The EPA estimates that the Bolt will provide 119 combined MPGe, on par with the Kona Electric and slightly ahead of the Leaf Plus and Niro Electric.

DC Fast Charging is not standard; it is a $750 standalone option for both trim levels.

If there's a single word for it, let's go with "zippy." A short wheelbase, good steering feel, and a decent ride make the Bolt feel a lot like any decent-driving hatchback, but with extra torquey twist and ultra-quiet operation. And we mean quiet – like most EVs, on smooth pavement the Bolt offers the sort of tranquil environment previously reserved for Bentley owners. It's neither sporty nor luxurious, but it drives well.

Its regenerative braking scheme may or may not be to your liking, however. Most electric cars allow you to determine the level of regenerative braking the car delivers when you lift off the throttle, which effectively allows for "one pedal driving" where much of the slowing is done by the car. It makes driving in gridlock much friendlier. You can do this in the Bolt, but your options are unusual. Leaving the car in Drive makes it behave like a regular car – you'll need to brake as usual. Putting the car in L engages aggressive regenerative braking, which allows for one-pedal driving, but unlike competitors, there's only one setting for it. Then, uniquely, there's a steering wheel paddle that activates max regenerative braking as if you have a second brake pedal. However, there's so little nuance to this paddle's operation that it basically just stabs at the brakes. In total, we don't like it. Three or four levels of regenerative braking, selected in a clearer manner through a touchscreen or dial, would be easier to understand and operate. 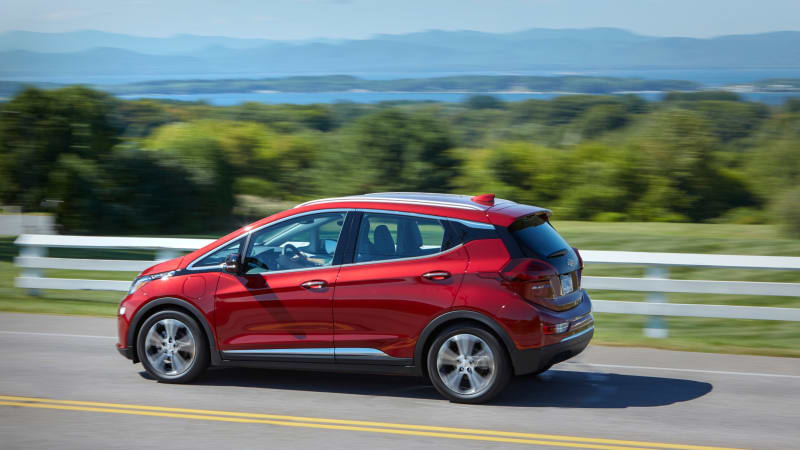 Where can I read more about the Chevrolet Bolt?


Our first drive of the Bolt from back in late 2016. It mightily impressed us with unparalleled range – but since then, the competition has caught up.

2019 Chevrolet Bolt vs. Nissan Leaf, Hyundai Kona Electric: How they compare on paper


We take a very close look at three of the strongest entries in this segment, looking at the granular details to see how they stack up.


A slightly tongue-in-cheek look at the Bolt's performance credentials. With ample torque at low speed, the Bolt is almost an autocross contender.

What features are available and what's the Bolt's price?

The Bolt is available in two trim levels. The LT starts at $37,495 and the Premier at $41,895 – both MSRPs are before any federal or local EV tax credits or other incentives. There are no mechanical differences between the two. It's worth noting that as of this writing, the federal tax credit has been reduced from $7,500 to $3,750 on the Bolt, but the MSRP is unchanged.

Standard equipment on the LT includes LED head- and taillamps, proximity entry and push-button start, a Teen Driver feature, and the Infotainment 3 system with the 10.2-inch touchscreen.

You can see a complete breakdown of 2019 Chevy Bolt features, specs and local pricing here on Autoblog . 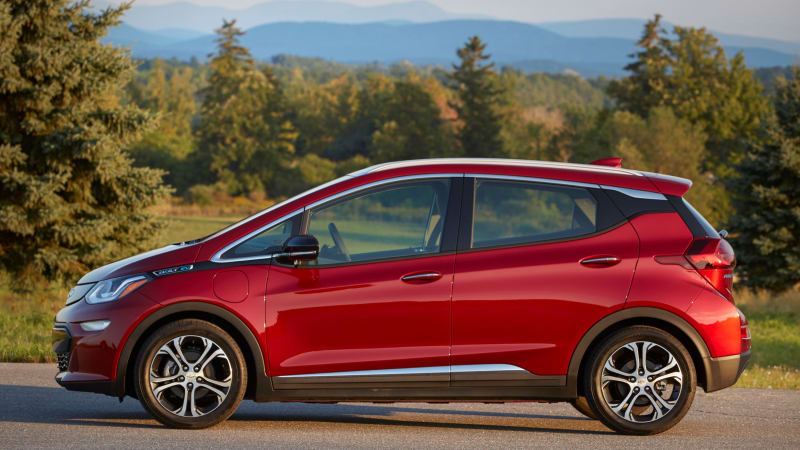 What are the safety features and crash ratings of the Bolt?

The Bolt comes standard with 10 airbags and a rearview camera. Many driver assistance features are optional on the LT but standard on the Premier: blind-spot warning, rear-cross traffic warning and rear parking sensors. There are also optional accident avoidance tech features available on both trims: forward collision warning with pedestrian detection and low-speed automatic emergency braking, lane-departure warning and lane-keeping assist, a following distance indicator and automatic high beam control.

The IIHS gives the 2019 Bolt its highest rating of "Good" in all crash tests, but a "Poor" rating for headlights and a "Marginal" rating for LATCH anchor ease of use. NHTSA gives the Bolt an overall five-star rating, its highest, but only four stars in overall front impact protection. Some side crash tests also received four stars, although the overall rating for side impacts and rollovers is five stars.

We consider the Bolt to be a safe vehicle given its overall size and safety content, although we are disappointed that many helpful driver assistance features are an additional cost. That said, even as extra-cost packages they are not bundled with non-assistance content and all safety content is available on the base trim.