1 Review
The 2019 Ford Ranger represents a return for the Blue Oval's small pickup, but this time it's a competitive midsizer rather than the compact truck you might remember from before. Its party trick is a small, turbocharged engine that delivers class-leading fuel economy through a fancy 10-speed automatic — no V6 or manual transmission options, which keeps things simple. What it does offer is a couple of cab configurations, available four-wheel drive, and lots of convenience and safety features.

The Ranger faces tough competition from the Toyota Tacoma, Jeep Gladiator, and Chevrolet Colorado, but we think the Ranger has some unique advantages in the segment. Read on to find out why.

Everything. The Ford Ranger is all-new for America this year. You can read more about what's new and different in our first drive review.

While it's probably a matter of personal preference as to whether you'd prefer the Ranger's interior design and layout to the Toyota Tacoma, we at Autoblog agree that both interiors are superior to the too-understated Chevy Colorado and the aging Nissan Frontier. The Ranger's interior has a chunky and handsome look.

We find the Ranger's seats to be comfortable even on long drives, with a much better seating position than the Tacoma, which puts front passengers too close to the floor. The interior materials look and feel about average for the class, although there's less hard, cheap-feeling plastic around than in the Colorado. The Jeep Gladiator is the newest entry to the segment, and it features a colorful and characterful interior heavily derived from the Wrangler.

Low-trim trucks make do with the ancient-looking, single-color 2.3-inch information screen between the analog gauges that provides basic trip computer information, but on optioned-up or higher trim trucks, there's the modern, multi-color 4.2-inch screen that has more available information and features. The top-of-the-line Lariat gets a dual-4.2-inch instrument cluster with an analog speedometer in between. Likewise, low-trim trucks get the Ford Sync infotainment system with a 4.2-inch screen controlled by surrounding buttons. For XLT and higher trims, the available Sync 3 system improves things considerably with an 8-inch touchscreen and Apple CarPlay and Android Auto functionality. Sync 3 is not our favorite infotainment system, so the ability to bypass it with smartphone integration is welcome. The Ranger is a little bit smaller than its competitors, but not in a way that matters for anybody except the statisticians. It's the second-smallest midsizer on sale, after the Frontier. Its 126.8-inch wheelbase and 210.8-inch overall length are a smidge less than the Colorado (128.3/212.7 respectively) and the Tacoma (127.4/212.3). And those two trucks come in a longer-wheelbase format, as well, while the Ranger's two cabs and two bed sizes both utilize the same wheelbase and come in at the same overall length.

Speaking of bed size, the SuperCab's bed is 72.8 inches long and 44.8 inches wide. The SuperCrew's shorter bed is 61 inches long and the same width. That's a hair wider than the Colorado and about 2 inches wider than the Tacoma. The longer of Ranger's beds is a smidge shorter than the competitors, and the short bed is right in between the Colorado and Tacoma. Long story short, it's a matter of inches in these major exterior dimensions, and it's not going to severely impact how many 2x4s you can carry. The Jeep Gladiator is only offered with a short 5-foot bed.

The Ranger comes with one only powertrain: a 2.3-liter, turbocharged inline-four that is good for 270 horsepower and 310 pound-feet of torque on 87 octane fuel. It's paired to a version of the 10-speed automatic transmission used on a lot of other Ford products. It's also the most fuel-efficient truck in its class, although not by a lot.

The Ranger beats all gasoline-powered midsize pickups on torque, but lags slightly on horsepower. Not that you'd notice it on the road, since the automatic's tight ratios keep the punchy EcoBoost engine in its sweet spot. Unladen, going down the road, most buyers will forget that there's an unconventional (for a truck) powertrain underhood and will probably appreciate the Ranger's ample torque and reasonably sprightly acceleration. It pulls better from lower in the rev range than the competition's V6s, which are coarse engines that need to be wrung out a bit to get their trucks moving. The EcoBoost and 10-speed combo won't be for everyone, but we think it's overall the best gasoline powertrain in the segment.

How much can the Ranger tow and haul?

What's more important than the subjective charms of the engine are payload capacity and towing, so let's deal with that briefly here. The Ranger can carry up to 1,860 pounds of payload, which is class-leading. The Gladiator can do up to 1,600 pounds, and the others are closer to 1,500 pounds. The Ranger can also tow up to 7,500 pounds when properly equipped, second only to the Gladiator's 7,650-pound rating. The Colorado can do 7,000 pounds, and the Tacoma and Frontier tie at 6,700 pounds. So the Ranger's absolute hauling credentials are stellar. What's the Ranger like to drive on- and offroad?

It's surprisingly nice. Ford really nailed the ride quality on the Ranger, especially considering it wears unusual parabolic leaf springs on the rear instead of a conventional leaf pack. On our first drive review, we found the ride firm enough to prevent wallowing or tippiness, but also compliant enough to absorb bumps without giving the frame the jitters. We credit smart tuning of the dampers and spring rates for this. The ride quality is more composed than competitors like the Chevy Colorado and Toyota Tacoma.

The smart automatic knocked out shifts without significant delay or hunting, other than some odd engagements at very low speeds, and we overall have no complaints about how this transmission works in the Ranger. The electrically-assisted steering is "delightful," as we noted in our first drive, and the truck tracks well on the road, too.

Where can I read more about the Ford Ranger?


Our first driving impressions of the Ford Ranger, mainly on-road with some off-roading on a prepared course. We discuss its design, capability, and history. 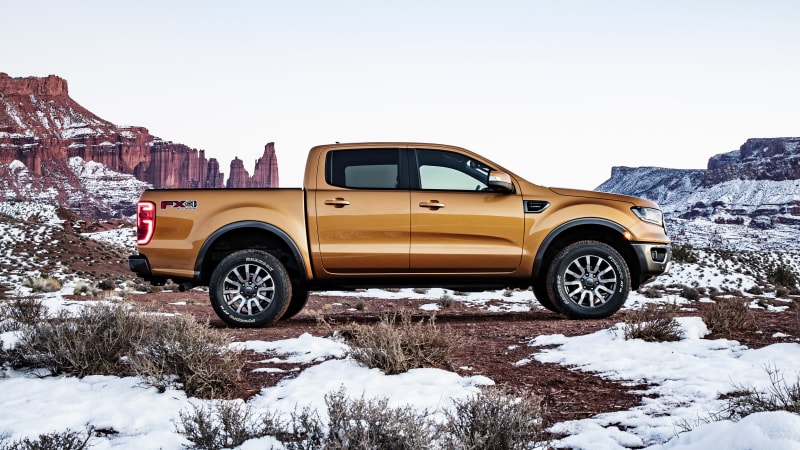 A deep dive into the specs, dimensions, and capabilities of the Ford Ranger versus its midsize truck competition, including the Jeep Gladiator, Toyota Tacoma, Chevrolet Colorado, and Nissan Frontier. A base Ranger XL SuperCab 4x2 starts at $25,495, and doesn't include much in the way of creature comforts save the basic SYNC system – SYNC 3 is not available. It even has vinyl flooring instead of carpet, arguably a benefit if the truck's likely to get dirty. Stepping up to the XLT ($29,135) brings alloy wheels, standard cruise control, carpeted floors, and the nicer 4.2-inch screen in the instrument cluster, among other things. SYNC 3 is an option now, but comes bundled in the $995 300A equipment group package that includes a leather-wrapped steering wheel, power side mirrors, and an auto-dimming rear-view mirror. The Lariat ($33,405) is the top-dog trim for now, featuring 18-inch wheels, body-colored bumpers, standard SYNC 3, the dual-digital screen instrument cluster, and leather-trimmed seats, among other things. A $1,795 technology package is optional, and provides rain-sensing wipers, remote start, a fancy Bang & Olufsen 10-speaker system (only on SuperCrew cabs), adaptive cruise control, navigation, and a wiper deicer.

Switching any trim to a SuperCrew cab with its 5-foot box will run you roughly $2,220. Four-wheel drive is a roughly $4,000 option on all Ranger trim levels. From there, the buyer can choose from several appearance and equipment groups, including the FX4 off-road package, the SXT, Black, or Chrome appearance packages, and on some trim levels, a Sport appearance package. All of these packages vary in cost and equipment, and some can be combined to offer a lot of potential customization.

You can check out a complete breakdown of specs, features and local pricing here on Autoblog.

What are the Ranger's safety features and crash ratings?

Neither the IIHS or the NHTSA have rated the Ford Ranger's crash test ratings yet.

All Rangers come with a fairly comprehensive suite of safety features, including: front, front-side, and side curtain airbags, plus a rear-view camera and forward collision warning with automatic emergency braking. Blind-spot warning and lane keeping assist are available options on all trims.

$690 - $2,968 Nat'l avg. savings off MSRP
See Local Pricing
I'm not in the market for a vehicle at this time. Please move this suggestion to the side for 30 days.
Huge Savings