Editors' Pick
View All Specs
1 Review
DEATH VALLEY, Calif. — It's surprising that a vehicle the size of the 2019 BMW X7 has taken so long to come to market, given how early BMW boarded the luxury SUV train. The original X5 debuted in 1999, just a few years after Mercedes-Benz brought its mass-market ML-Class SUV to suburban driveways. Twenty years later, the X5 is in its fourth iteration, and the entire BMW lineup is awash with SUVs, from the compact X1 to the controversial X6. As such, the new 2019 X7 is the German automaker's first direct competitor to models like the full-size Range Rover and Mercedes-Benz GLS-Class.

We had a chance to drive a prototype X7 nearly a year ago, but it would be months before Germany would give us any of the biggest Bimmer's final specs. For the full launch, our drive started early in the morning on the Las Vegas Strip and ended several hundred miles southwest at the Pacific Ocean, with a not-so-brief detour through Death Valley.

The X7 is currently the largest model the company makes, a three-row SUV that slots above the X5. Think of it as the SUV equivalent to the flagship BMW 7 Series sedan (though for a bit less money), a new flagship in the days of SUVs and cheap fuel. Size-wise, it's larger than nearly any other SUV on the market, falling short only of body-on-frame SUVs like the Cadillac Escalade or Lincoln Navigator. At launch, America gets two gasoline engines — an inline-six xDrive40i and a V8-powered xDrive50i — though a plug-in hybrid will debut sometime within the next year or two.

The X7 channels every bit of the 7 Series' long history of comfort and refinement, making even an unwelcoming place like Death Valley seem almost hospitable. The air suspension provides a plush ride over the broken desert asphalt, adjusting and self-leveling as needed. As with other BMWs, the X7 wears run-flat tires. The engineers worked some magic compared to past BMWs, particularly with the bushings, specifically tuning the suspension to improve ride quality with our xDrive50i's 22-inch wheels and Pirelli P-Zero run-flat tires. In the softer Comfort mode, the front end of the X7 could feel a little light over big dips, but Sport mode mitigated that issue without feeling overly stiff. This might just be the best-riding BMW we've ever driven fitted with run-flat rubber or 22-inch wheels.

It's quiet, too, enough so that a driver can have a conversation with a third-row passenger without resorting to shouting and hand signals. The only noise you ever really hear inside is the low growl from the 462 horsepower 4.4-liter twin-turbo V8. Our xDrive50i tester included the M Sport exhaust, and BMW reps say the noise isn't piped in. It's nice, but it lacks some of the aural meat of a Mercedes-Benz or Land Rover V8. The xDrive40i's 340 horsepower turbo inline-six offers a sweeter, smoother exhaust note, but we dig the V8's extra grunt. You can't go wrong with either engine, though we're looking forward to the upcoming plug-in hybrid variant. It's not just the ride or quiet interior. BMW has your ass covered, too, in a sense. The 20-way adjustable front seats heat, cool and massage, though it takes a bit of fiddling to figure out which of the many buttons and switches adjust what settings. Hell, even third-row passengers have heated seats. All three rows are power adjusting only, which may sound overly complicated, but when a driver in the front can slide the second row forward to give third-row occupants a bit more room with the push of a button on the door panel, you start to understand. The X7 comes in either six- or seven-passenger configurations, with the former offering easy entry to the rear seats by replacing the second-row bench with a pair of captain's chairs. Space in all three rows is generous. An average adult can sit comfortably in the third row, though like most three-row SUVs with limited rear headroom, we wouldn't recommend it for taller passengers or an extended length of time. Five-zone climate control means all three rows can control the A/C, though we're skeptical about how much difference the separate zones will make.

With the third row up, space behind the rear seat is limited, only fitting our carry-on luggage when placed upright, though there is a sizable bin underneath the load floor. Still, the cargo area is enough for a few soft bags or a load of groceries. The third row folds flat with the push of a button, vastly increasing the X7's cargo area to 48.6 cubic-feet. With the second row flat, too, space increases to 90.4 cubic feet. That lags behind both the Range Rover and GLS-Class, but eclipses the 7 Series' 18.2 cubic-feet of trunk space by a lot. 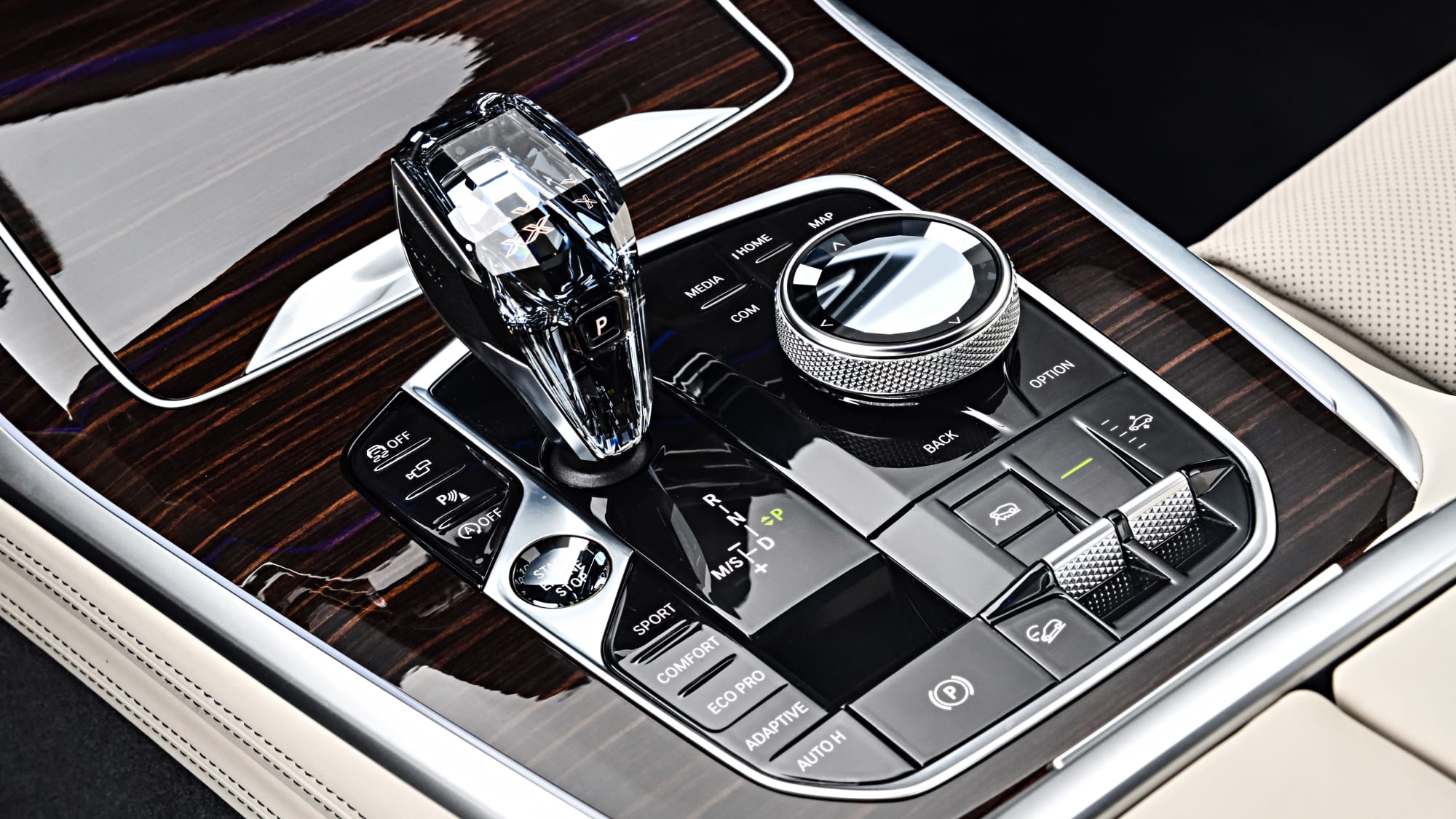 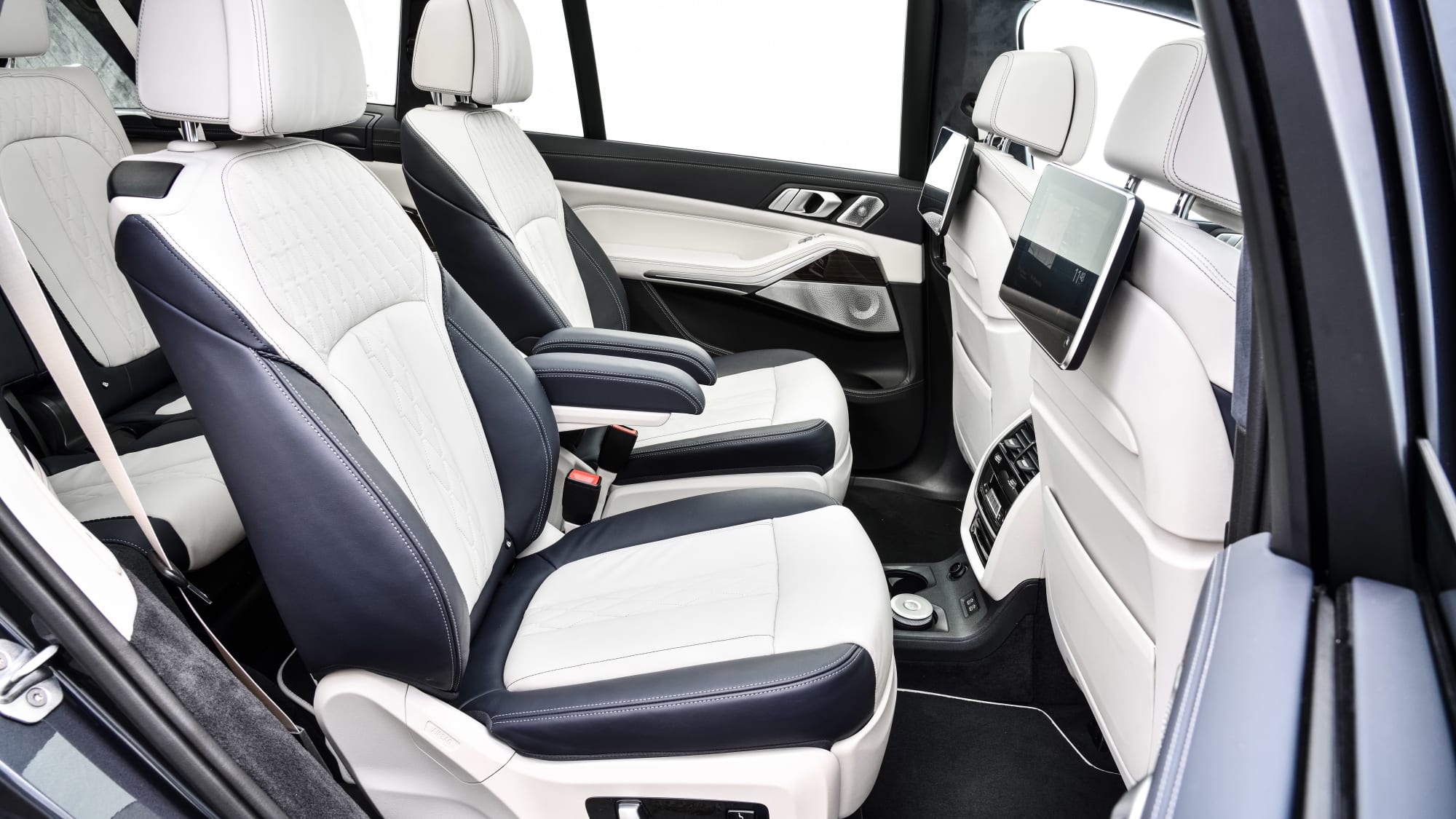 The interior itself is standard BMW, though we mean that as a compliment. Materials throughout the cabin are excellent, with soft, handsome leather, wood and metal covering nearly every surface. The blue and white leather in our tester was particularly striking, though the saddle brown in some of the other models looks great, too. Controls are well placed, and there are hard buttons for just about every commonly-used feature. It's also a step up from both Range Rover and the Mercedes-Benz GLS, though the latter is due for an update that should improve things immensely. Right now, the X7 is the best thing in the class.

As with any modern German luxury vehicle, the X7 is loaded with tech. The latest generation of BMW's iDrive infotainment system is clean, fast and intuitive, though the gesture controls still feel like a novelty, and the voice command system lags behind Mercedes. The subscription-only Apple CarPlay and lack of Android Auto are issues, too, but for the most part it's all easy-to-use. The full-color heads-up display is crisp and easy to read, at least without polarized sunglasses. There's a wireless charging pad in front of the heated and cooled cupholders, and USB-C ports for all three rows. The second row gets an HDMI socket and two headphone jacks as well as a built-in Blu-ray player. We like the adjustable ambient lighting, especially the adjustable LEDs in the optional illuminated panoramic glass roof. 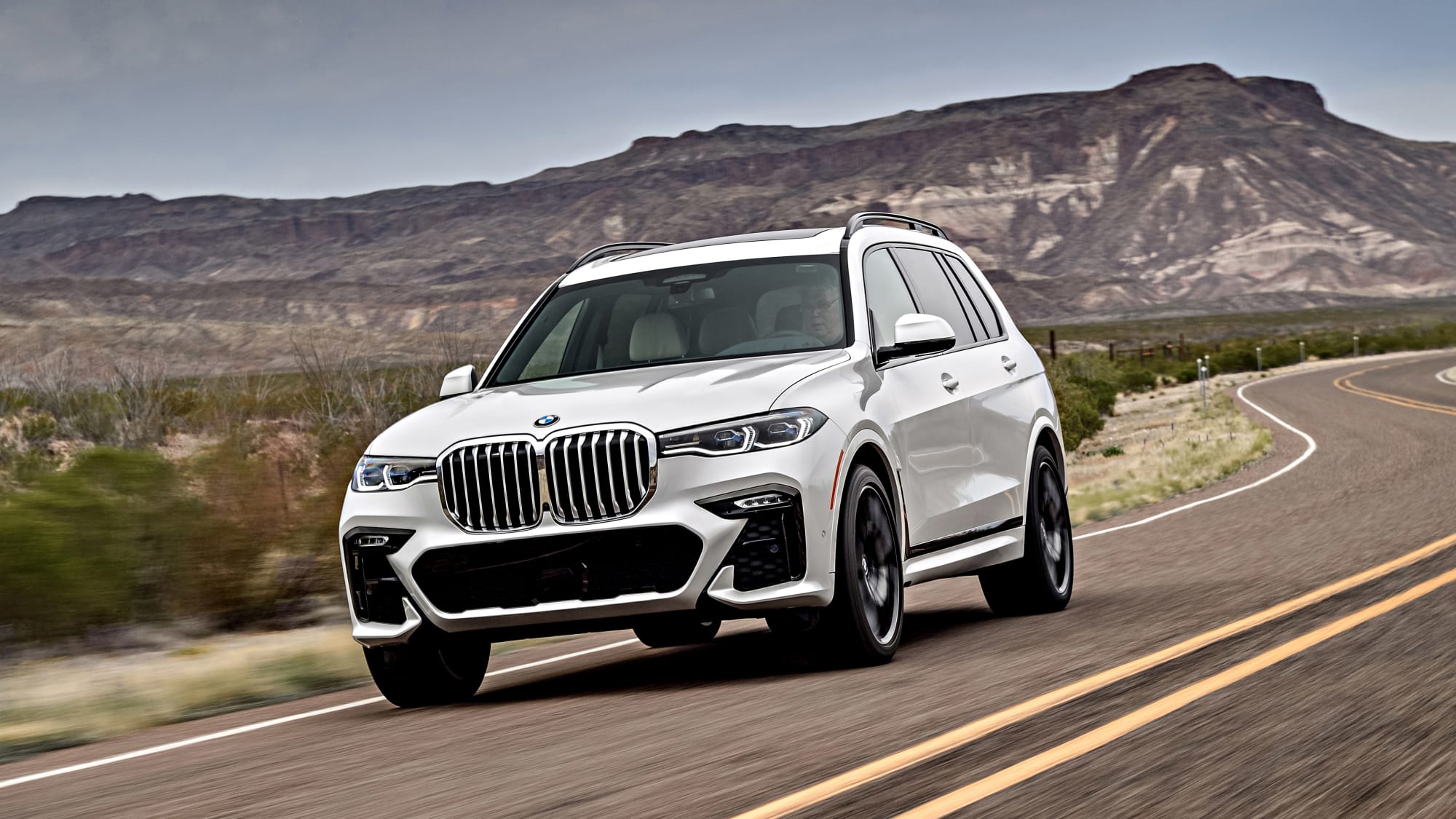 The X7 hides its bulk well, even though it isn't a small vehicle. It doesn't look all that much bigger than an X5 despite having a 5.1-inch longer wheelbase and nine full inches of overall length. The greenhouse is relatively large, helping improve overall visibility. While the adaptive cruise worked well enough and definitely reduced fatigue toward the end of the trip when we hit traffic on the 405, we had some pretty frustrating issues with the lane centering on the steering. The road through Death Valley is full of dips, and every single time the X7 went a little light at the front, the system would beep and the steering wheel would vibrate. This happened so often that we eventually stopped using it. Even on flat pavement, the system feels overly aggressive, constantly tugging to keep the X7 centered.

The steering itself was numb, though it was relatively direct and weighted well. It's disappointing in the context of a BMW — especially one equipped with the $3,550 M Sport package — but no worse than what you'll find in a standard Range Rover or Mercedes-Benz. That said, both the Rover and Mercedes offer sporty SVR and AMG variants that vastly improve things. We've levied similar criticisms against the X5. Frankly, it's a bit boring at times, though it's hard to fault BMW for erring on the side of comfort.

Pricing for the six-cylinder X7 xDrive40i starts at $74,895 including destination charge, slightly more than the older GLS but about $15,000 less than a base Range Rover. Stepping up to the V8-powered xDrive50i will set you back at least $93,595, slightly undercutting the GLS 550 and more than $10,000 less than the more powerful V8-powered Range Rover. (An all-wheel-drive BMW 740i xDrive sedan starts at $86,650 with the 750i xDrive moving the needle up to $99,950.) The GLS, Range Rover and 7 Series all offer optional engines with substantially more power than the X7, but you pay dearly for the extra oomph. 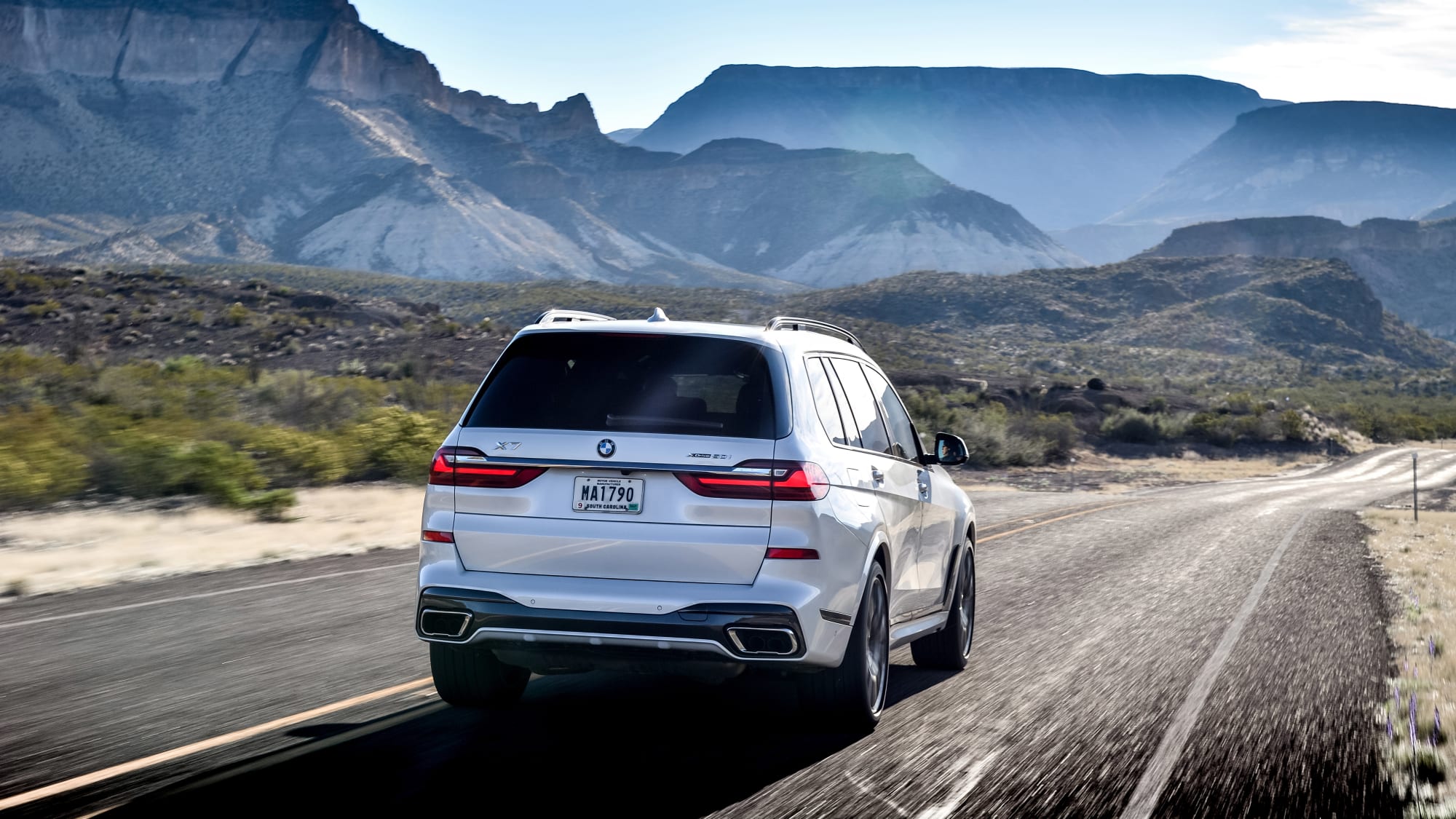 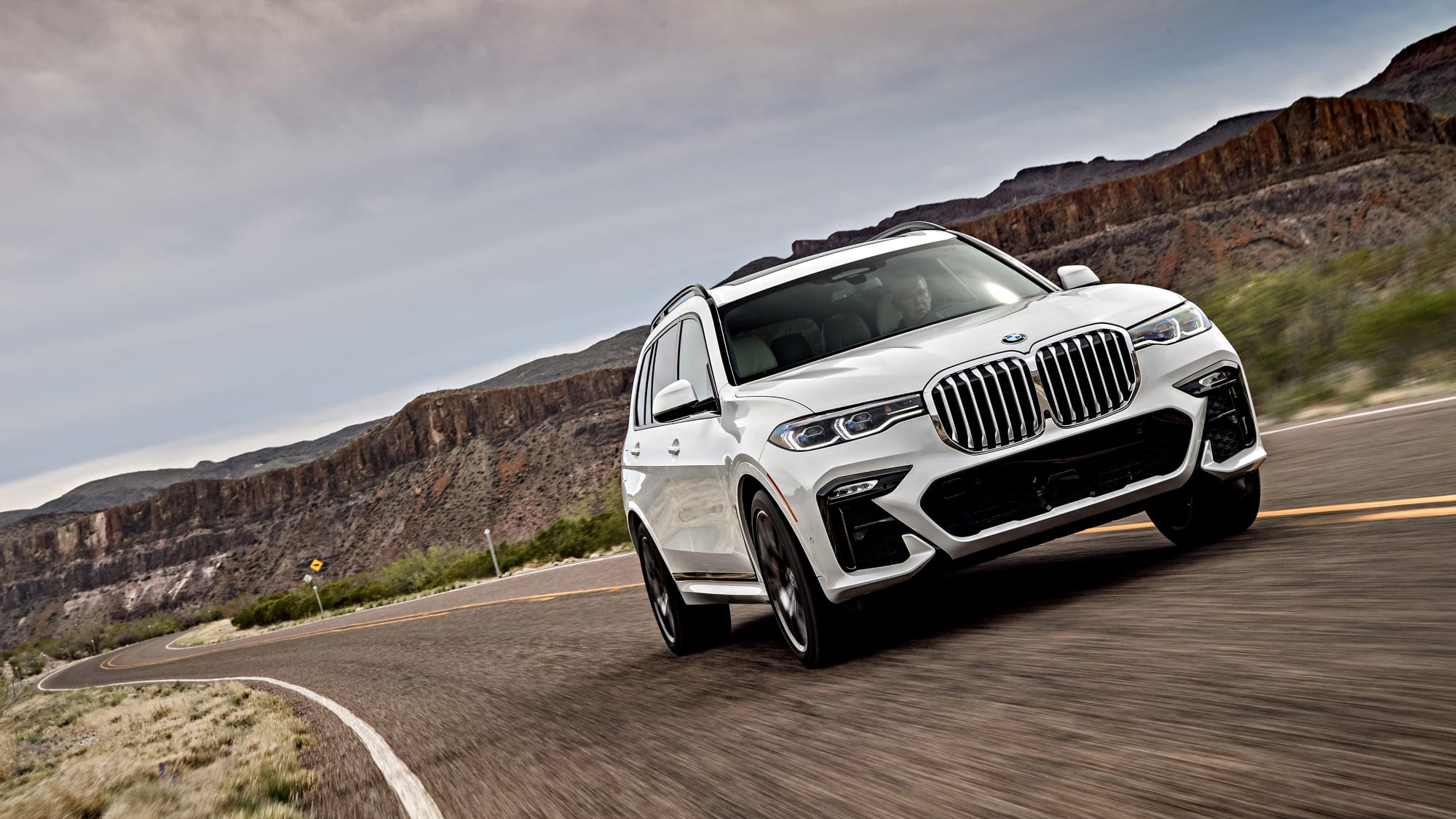 The X7 does have the optional M Sport package, though it's mostly visual, adding larger intakes at the front, M wheels, gloss-black trim and an M Sport wheel. It's not a full M model (or even an M Performance model like the BMW M240i or X5 M40i, but we do appreciate that there aren't M Division badges tacked on all over like on some other, lesser BMW models. Europe gets a sporty and torquey diesel-powered X7 M50d. We dig the X7's clean overall design, though that nose takes a bit to get used to. This is definitely a luxury vehicle first, but that's generally fine for a three-row crossover like this.

The 2019 BMW X7 is sure to be a hit, and deservedly so. It helps that it's the most modern vehicle in the class, but taken on its own, it's still a comfortable, spacious and generally enjoyable place to soak up the road.

The design both inside and out isn't quite as timeless as the Range Rover, but the interior quality and tech is leagues better than what Britain offers. The same goes for Mercedes-Benz, though the next-gen GLS is going to be a tough competitor. Volvo and Audi both offer three-row models with the XC90 and Q7, but neither of those offer the space or performance of the X7. It's also less expensive and better equipped than its 7 Series sibling. It may not be the sharpest driving vehicle in BMW's lineup, but it's as good or better than the SUV competition in terms of tech, comfort and refinement. For a lot of other people, the X7 will be a more spacious and practical alternative to the 7 Series for a lot less money. 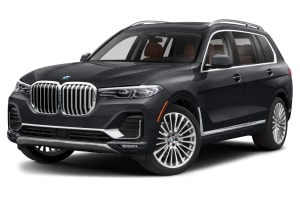