It looks like the 2020 Audi Q7 will feature refreshed styling when it arrives on the scene some time next year. Having introduced completely new versions of the A8, A7 and A6, not to mention a new model in the Q8, it comes as no surprise that Audi will be applying the various new styling cues to existing models. We've seen this happen with the A4 and given these spy photos, it seems the Q7 three-row crossover is also on the refresh docket. Judging by what we can see here, the visual changes are relegated to the front and rear fascias.

Up front, the headlights are slimmer than those on the current Q7, and the inside corners have been pulled farther inward. The grille appears to sit a little lower in the fascia, and the top has been reshaped to match the new headlights. Those also feature bold LED shapes that are a signature of current Audis.

The taillights get a similar treatment to the headlights with bright geometric LED designs, while the tailgate itself has been (comparatively) drastically reshaped, with the area below the taillights pushed in to match the depth of the license plate alcove. The rear bumper doesn't have any provisions for exhaust tips, which seem to now be hidden below (we doubt this is some sort of electrified Q7).

Besides the exterior, it's possible the Q7 could be updated with Audi's latest dual-touchscreen MMI system found in the Q8. Other mechanical updates are possible too, but we wouldn't expect anything major for such a mid-cycle refresh. 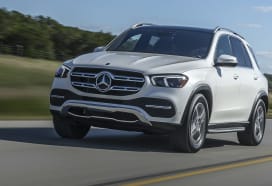