Ford dreams of a connected-car world

Could traffic lights, the scourge of many a hurried driver, one day be a thing of the past?

That's the thinking behind a trial Ford has been demonstrating as part of a government-funded program in southern England. It's based on vehicle-to-vehicle technology (V2V) and the concept of how pedestrians navigate through busy crowds without colliding with one another or coming to a full stop.

The trial is part of the two-year UK Autodrive program that just ended. Ford is demonstrating the concept, dubbed Intersection Priority Management, on the streets of Milton Keynes, a town about 55 miles northwest of London. It relies on vehicle-to-vehicle communications systems equipped in Ford cars that read each other's location, direction of travel and speed, to suggest optimal speeds that will allow the cars to safely pass by each other at intersections without having to stop. The trial uses human drivers behind the wheel, but the technology has obvious applications for autonomous vehicles as well. 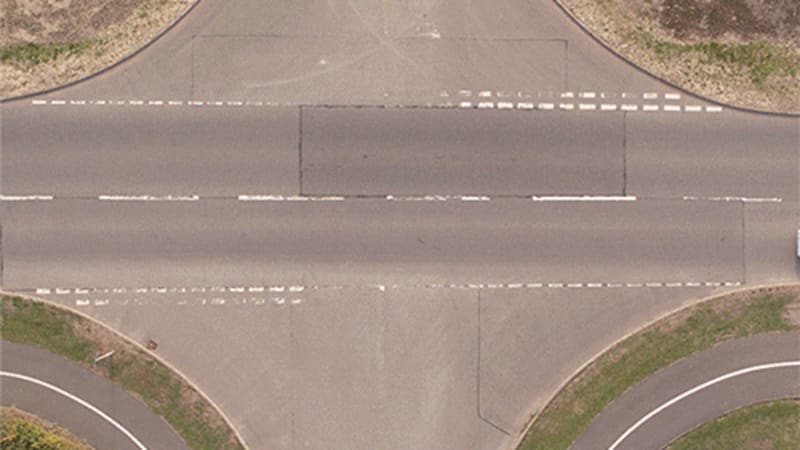 Widespread adoption of such V2V technology would bring obvious benefits in the form of less time spent waiting at red lights — one interpretation of AAA data estimates the average American driver spends nearly 59 hours a year waiting at red lights — and fuel savings as drivers avoid braking, idling and accelerating from a full stop. There could also be big safety gains as well, since 40 percent of all crashes in the U.S. occur at intersections, most of them involving left turns.

It adds to work Honda is doing in Ohio to develop "smart intersection" technology using vehicle-to-everything communications technology to "see" approaching vehicles and pedestrians that are concealed from the driver behind buildings or other objects.

Ford has helped explore similar ground as part of the 20-million-pound UK Autodrive initiative, which is supported by technology and automotive companies, local authorities and academic institutions. Ford has demonstrated connected-car technologies that can alert drivers to potential accidents when approaching an intersection, such as when a driver has ignored a red light. The tech can also map available parking spaces and help sync cars with nearby traffic lights to help them avoid getting stuck at a red light.

Earlier this year, Ford teamed with Vanderbilt University researchers to demonstrate how vehicles equipped with adaptive cruise control could help ease so-called phantom traffic jams that seemingly arise out of nowhere by keeping vehicles at a consistent distance from one another.