Living in the slow lane and loving every minute of it

Foot to the floor, I glance at the speedometer. It reads 74 miles per hour. Incredulous, I thumb the button on my two-way radio and inquire from the van behind me how fast we're going. "About 75," I hear through the walkie. I nod. Must be pointed downhill.

This is life in the slow lane, and I'm relishing every minute of it. So far this year, I've driven two supercars capable of exceeding 200 miles per hour – the Lamborghini Huracan Performante Spyder and the McLaren 720S – a Hellcat or two, and I rode a Ducati throughout Monterey Car Week that can do 0-60 in the blink of an eye. But today I'm behind the wheel of my very own 1975 Volkswagen camper van.

The factory rated my van's air-cooled 1.8-liter engine at a little less than 70 horsepower, and that was probably generous. It's a high-top camper, which makes it even more brick-like than the more common pop-top conversions. Even with those cards stacked against it, my camper van mostly keeps up with traffic. As long as the road ahead is completely flat. And there are no significant headwinds. And there's a semi in front to draft. (Just kidding. Sort of.) 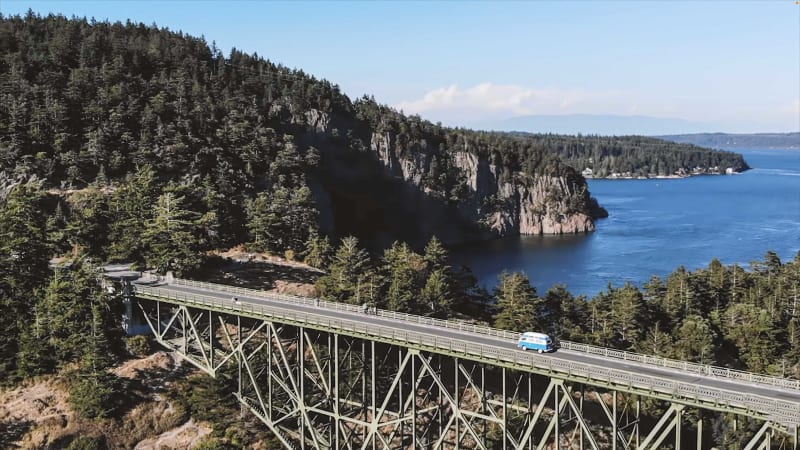 The Toyota Sienna carrying two videographers in hot pursuit has dual power sliding doors. My van does not. It also has no air conditioning. No power door locks or power windows. Heck, it doesn't even have power steering. But when we stop to grab a coffee halfway into our journey, each of my coworkers traveling with me on this two-hour road trip say they'd like to take a turn driving my van. Maybe later, I say.

We're caravaning our way to Deception Pass State Park just north of Seattle, Washington. It's a beautiful sunny day, and we're going camping. That's where my van really shines. It has hookups for electricity and running water, a refrigerator stocked with food and drinks, a stove we'll use for eggs and hash in the morning, and a nice, comfy bed thanks to the two-inch memory foam topper I keep under the rear package shelf.

My wife and I use this van as much as we can. Because daily life can really be a drag, right? Late in 2017, we made our first long journey in the camper van that its previous owner appropriately named Blue. We put a thousand miles on Blue making our way across Washington and Oregon, stopping along the way to take in the sights and sounds. And to replace a fuel pump (twice, though that issue has since been sorted – I think).

Blue is no garage queen, and he's got the chips, blemishes, and imperfections to prove it. I still think he's held up better than most of the rest of us. I keep a small bag of tools under one of the seats, an in-depth owner's manual in the glove box, and a smile plastered across my face whenever we head out for a drive. As I say in the video up above, I may be the last one to show up at the campsite, but at least I'll show up in style.