From the original 110S Cosmo to the first RX-7 AUGSBURG, Germany — Everything weird and wonderful about Mazda's relationship with the Wankel rotary engine is embodied in the delightful 110S Cosmo Sport of 1967. Just shy of 1,200 were built and, for most of its life, it remained a Japanese curio. Driving one is a rare privilege, and yet here I am, leading a convoy of owners through Bavaria away from a private museum holding the most extensive collection of Mazdas outside of Japan.

Created by local franchise holder Walter Frey, what started out as a business relationship in the 1970s has blossomed into a lifetime love affair. Whether the residents of Augsburg are quite so enamoured is another question. As I leave the museum I pass a sign proclaiming my entry into an "umwelt zone" for low-emissions vehicles. The oil-tinged plume of smoke in my wake rather makes a mockery and underlines one reason there are no rotary engines in the current Mazda product range.

Created by a German but perfected by the Japanese, it seems appropriate to celebrate the association with the Wankel engine here. Mazda may have gone on to sell nearly 2 million rotary-engined cars to the world — the U.S. included — but 50 years ago it brought two Cosmos to the Nürburgring and entered them into the grueling Marathon de la Route as a proof of concept. After 84 hours of continuous running and a fourth-place overall finish, Mazda had demonstrated to the world a rotary could stay the distance. 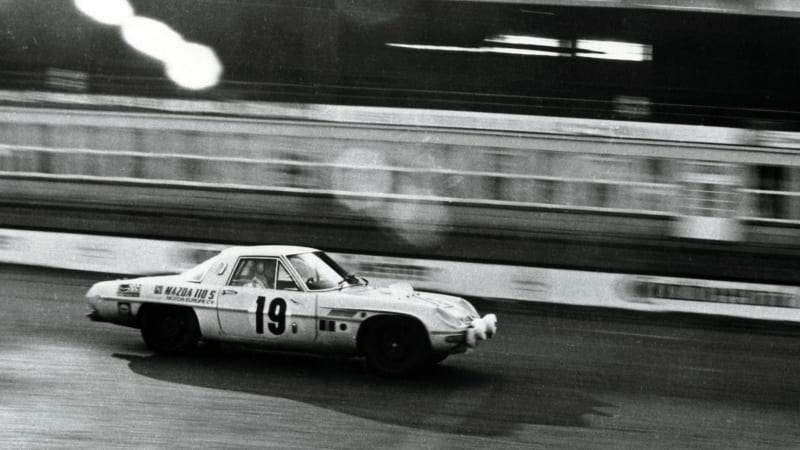 I have a slightly less grueling schedule but look forward to following the instructions to rev the hell out of the Cosmo to clear the smoke out of its system. Those following me will certainly be hoping this does the trick.

A thirst for oil as well as gasoline isn't the only rotary trait. The two chambers of its motor displace 491 cc apiece, equivalent to about 2.0 liters in a regular reciprocating design. In this second-series car, it delivers around 128 horsepower, which drives the rear wheels through the transmission's five gears. There doesn't seem to be a whole lot of progress in any of them, truth be told, the characteristic lack of torque making for more noise than meaningful acceleration. 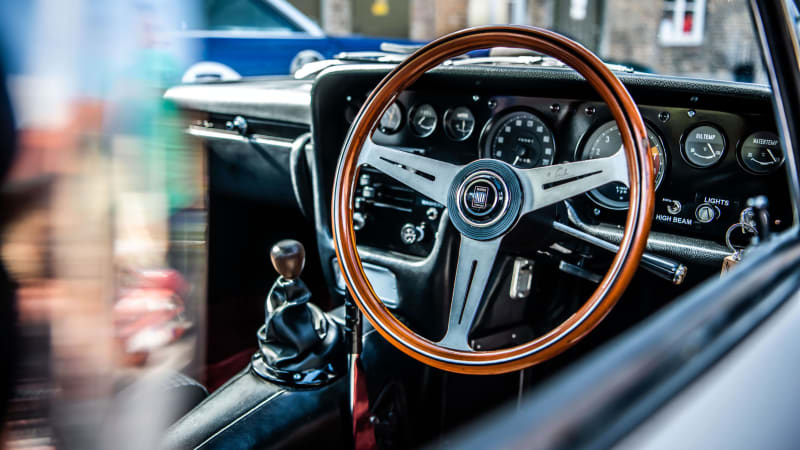 It's a small car and weighs just more than 2,000 pounds, with a power-to-weight ratio not far off that of an original NA Miata. But it's one for carrying speed, not building it. The wood-rimmed Nardi wheel is one piece of luxury in an otherwise functional, vinyl-trimmed cabin, and through it the Cosmo has a nice blend of stability and agility. It's less happy at lower speeds, coughing and spluttering its way through otherwise peaceful Bavarian villages before disappearing up the road with that characteristic buzzsaw rasp.

Positions in the convoy change, and I find myself following a colleague in an RX-3, or Savanna as it was known in the Japanese market. Like many Japanese cars of the era, there's a sense of lost-in-translation American styling, with hints of '70s Detroit in the chrome and fastback proportions. Accordingly. the RX-3 was among a family of sedans and coupes that brought rotary engines to the U.S.; Mazda even created a Wankel-powered, flare-side pickup — the REPU — exclusively for the American market. An example resides in the Frey collection, configured as a liveried tow truck. 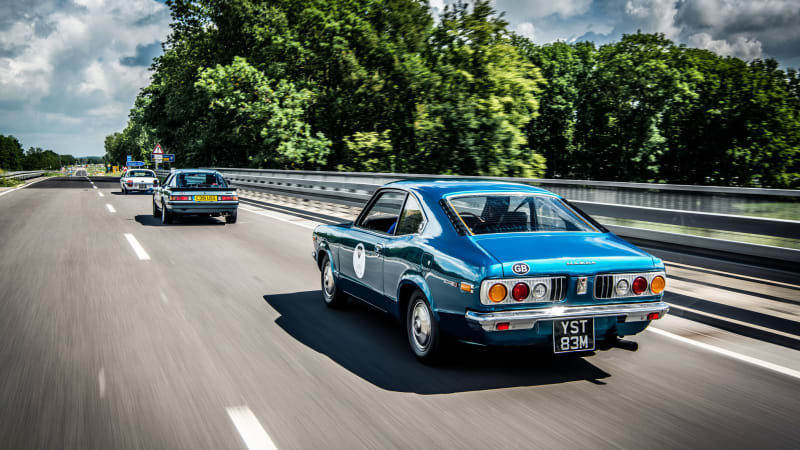 The angry sound of the RX-3's engine is completely at odds with its retro looks, and drowns out even the Cosmo, and the spits of flame from the exhaust add to the amusement value. These were raced successfully in their time, the RX-3 beating the mighty Skyline GT-R in the 1971 Fuji 500-mile race, among many successes. Victory at Le Mans in the ear-splitting 787B in 1991 remains Mazda's crowning achievement with rotary power, but RX-7s also raced with distinction around the world, not least of them in '80s and '90s in the IMSA series.

As such, an opportunity for a quick swap into a first-generation RX-7 is too good to turn down. Although it came just a decade after the Cosmo, it feels like it's from a different age. The interior is much more up to date, and it drives like a modern car, too. It's more refined than the Cosmo and shows the turbine-like smoothness RX-7s and, later, RX-8s brought to a new generation of rotary fans. 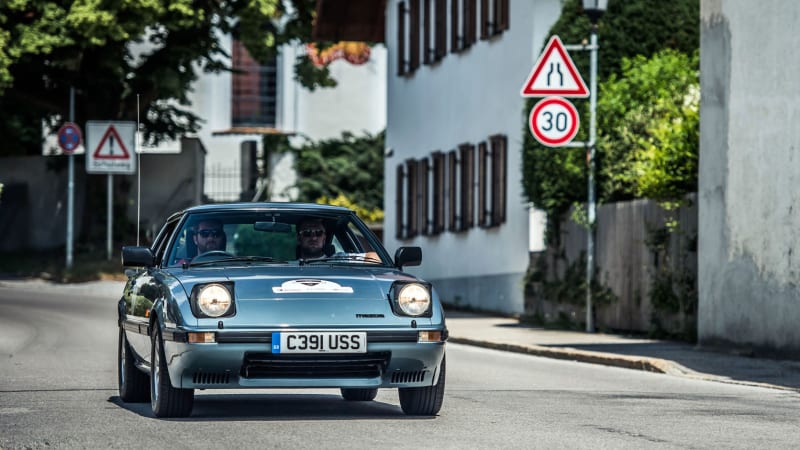 It's a beautiful car that feels a generation ahead of contemporary rivals, not least those offered by Porsche at the time. The FC that succeeded it established forced induction and proper performance, the final FD version combining rotary, sequential turbocharging and shrink-wrapped styling into perhaps the best-looking Japanese sports car ever built. They remain hugely desirable, though highly strung to the extent that many owners swap out rotaries for crate V8s. Understandable? Perhaps. Forgivable? I'm not so sure, given for better or worse the engine is the defining feature. 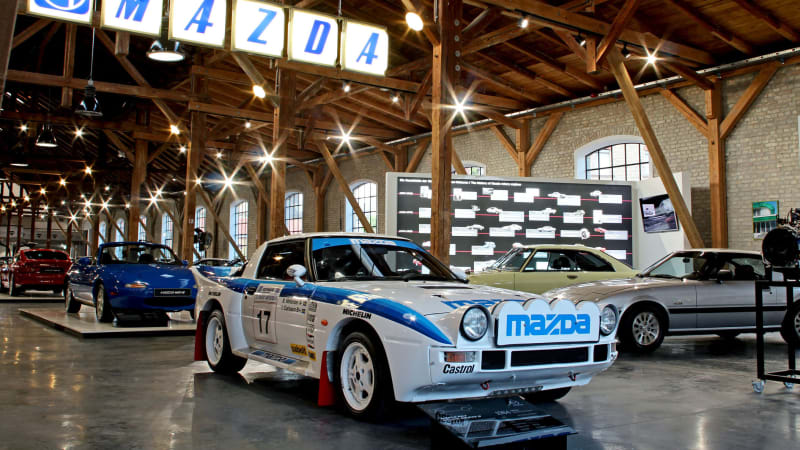 Back at the Frey museum, the breadth of Mazda's rotary history becomes clear. There are rally cars, buses, delivery trucks, luxury coupes, Group B rally cars and any number of otherwise normal-looking sedans and hatches in all sizes and flavors. Even now, six years after the RX-8 was discontinued, Mazda continues to be defined by rotary, future applications for range extenders and the like teased if not yet confirmed. "It is our sincere hope that in the not-too-distant future a new chapter in the history of the rotary will be written," teases the introduction to one product presentation. If that results in some form of 21st-century Cosmo, I'll be first in line.