7.5
View All Specs
Add a Review
I may have driven from Crested Butte, Colo., back to Portland in a Kia Stinger, but that's not how I got to the snow-encrusted mountain town wedged deep in the middle of the Rockies. Nope, I got there the "quick" way via Dog Friendly Airlines, a two-hour stop in San Francisco, a landing at Montrose airport and a two-hour drive in the 2019 Kia Sorento. That, plus a brief jaunt around Crested Butte would be the extent of my seat time in the revised-for-2019 family crossover, but it was enough to shine a light on what's changed (not a lot) and remind that this is still a worthwhile alternative to a pair of midsize SUV segments.

Ah, they actually changed it?

Sure did! It takes looking quite closely at side-by-side photos, but lo-and-behold, there were subtle styling changes made for the 2019 Sorento. The headlight clusters were rearranged so that the LED turn signal strip is now below the headlight elements rather than above them. Below, there are still four LED running lights (still found on select trim levels), but they are now smaller and no longer look removed from an operating theatre. They reside in a shapelier lower bumper housing. Meanwhile, the grille insert has been changed to include differently shaped dot elements.

The lower rear bumper was also given a nip-and-tuck, while the taillight elements are now redder throughout. In total, typical mid-life refresh stuff.

Changes to the interior are even more subtle, but were even less necessary, as the 2019 Sorento continues to boast a handsome, well-made cabin that in top trims is quite luxurious. Admittedly, I'm curious to experience one of the lower trims to see how much of the premium vibe they share, as I've only experienced the top SX-L trim, both with the 2019 in Colorado and when the current generation was launched back in 2016. 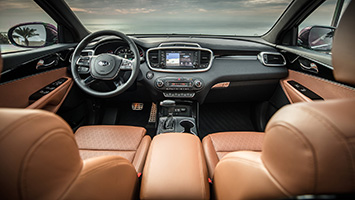 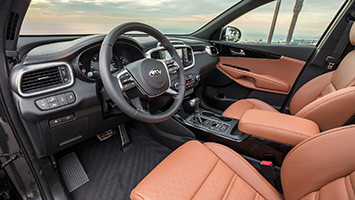 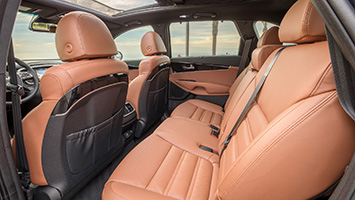 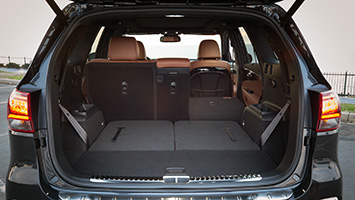 A sprinkling of new features

Now, those updates include a new steering wheel (no complaints, quite comfy), a new shifter head (change for change sake) and improved graphics for the instrument cluster (if they say so). The SX-L does come with a new Terracotta interior color, which is quite classy, as you can see in the photos.

Tech updates include a 7-inch touchscreen with Apple CarPlay and Android Auto now standard on all trim levels (a non-touch color display used to be standard on L and LX trims), and a wireless charging pad added as standard equipment to the SX and SX-L.

Lane-keeping assist was added to the safety tech ledger, enhancing the lane-departure warning system already found on the SX and SX-L. Unfortunately, only those top two trim levels can be graced with accident avoidance tech, unlike the crossovers from Honda and Toyota. Regardless of trim level, the SX and SX-L's driver inattention and fatigue monitor would be a stand-out feature among non-luxury SUVs. I would assume it would be less prone to crying wolf than the comparable system found in the Stinger where it didn't seem to get along with the quick, ultra-responsive steering.

As for the Sorento's steering, it was apparently retuned by Kia's new driving dynamics wizard, Albert Biermann, but without a back-to-back drive with the previous model, I'll have to take Kia's word that it's better. As I wrote back in 2016 for a different publication, "The Sorento SX's steering proved to be precise, competent and seemingly vice-free for the segment." Yep, that still very much applies. Whether different or no, the steering is light and friction-free in effort. It's also a bit numb on center, which should make for a relaxing drive on the highway and probably result in fewer hiccups with the "you're falling asleep!" alarm. Those looking for a sharper steer will probably want to look elsewhere, perhaps in the direction of a Mazda dealer.

Body motions were kept in check on the winding mountain roads from Montrose to Crested Butte, without a hint of the nautical rebound typical of past Hyundai/Kia crossovers. I actually got a chance to ride in the back seat for a good half hour or so, and can report the kids should be perfectly content back there even on the SX-L's bigger 19-inch wheels.

They will also have access to a couple of third row seats regardless of trim level or engine. Previously, the Sorento came standard with five-passenger seating, which was also the only way to get the optional 2.0-liter turbocharged four-cylinder engine upgrade. That's been discontinued, as Kia says customers were not only overwhelmingly opting for three-row Sorentos, but associated a V6 engine as the preferred type of engine upgrade for the segment. A 2.4-liter 185-horsepower four-cylinder is standard, but was not sampled. One should assume it to be quite slow. 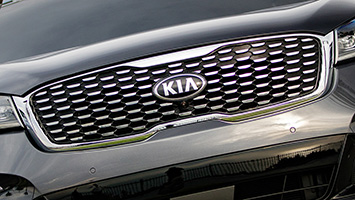 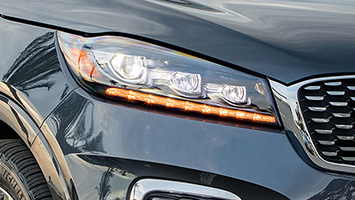 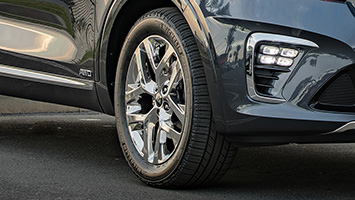 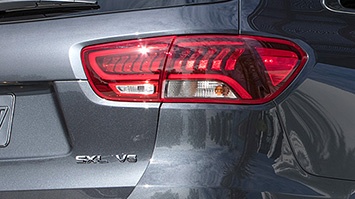 How it stacks up

As tested, the 3.3-liter V6's bullish 290 horsepower and 252 pound-feet of torque impressively brings the Sorento up to speed without much effort or fuss. The new for 2019 8-speed automatic responds happily to right-foot inputs, with throttle response and downshift-readiness improved by putting the Smart Shift & Drive settings into Sport. Now, you might think the Sorento's smaller exterior dimensions would result in a considerably lower curb weight and therefore performance than key competitors, but it actually falls in between the Honda Pilot and the Toyota Highlander in terms of curb weight.

Really, the biggest dimensional difference between those and the Sorento is in overall length (about 7 and 5 inches, respectively) and width (about 4 and 1.5 inches, respectively). The Sorento's wheelbase is almost equal to the Highlander's, meaning its rear-row legroom is comparable, but it falls well short in terms of cargo space, particularly behind the aft-most row. Its maximum cargo space of 73 cubic feet is generous, but on-par with bigger compact SUVs like the Toyota RAV4 and Honda CR-V. The Highlander and Pilot have about 10 cubes more.

Yet, this size difference is arguably what makes the 2019 Kia Sorento such an intriguing entry in the midsize crossover segment. Yes, it has about the same maximum cargo capacity as the CR-V's of this world, but it also has a third-row seat comfortable enough for medium-sized teens, a more premium cabin and the availability of a stout V6. At the same time, it may not be as big inside as the Pilots and Highlanders of this world, but not everyone needs that much space, and its tidier dimensions should make parking easier and it does feel a little less cumbersome to drive. There's definitely something to be said for an in-betweener alternative, which is exactly what the refreshed 2019 Sorento is. 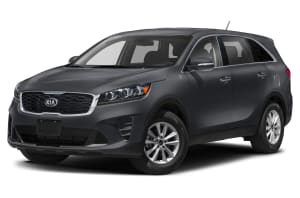