Jaguar I-Pace vs. Tesla Model X and Model S: How they compare on paper

Jaguar takes on the EV establishment

Joel Stocksdale
When Jaguar released its first specifications on the 2019 I-Pace, we decided to see how it stacks up with a number of other EVs including the Tesla Model 3, Chevy Bolt EV, and Hyundai Kona EV. The reason being that they all deliver between 200 and 300 miles of range, and they were all quite close in size. But it wasn't a perfectly accurate comparison, because the Jaguar occupies an odd space in the electric market. While it offers similar range and size to those more entry-level EVs, it packs substantially more power, more brand cachet, and, once the official pricing was released, a much higher price tag. As such, we wanted to also compare it with the cars synonymous with luxury electric motoring (literally), the Tesla Model X and Model S. We're only comparing it with the base-level 75D models of each Tesla, since they are the closest in price and performance to the Jaguar. You can see the raw stats below, and can find more analysis and highlights farther down. If you'd like to compare these cars with others, be sure to try out our comparison tools. 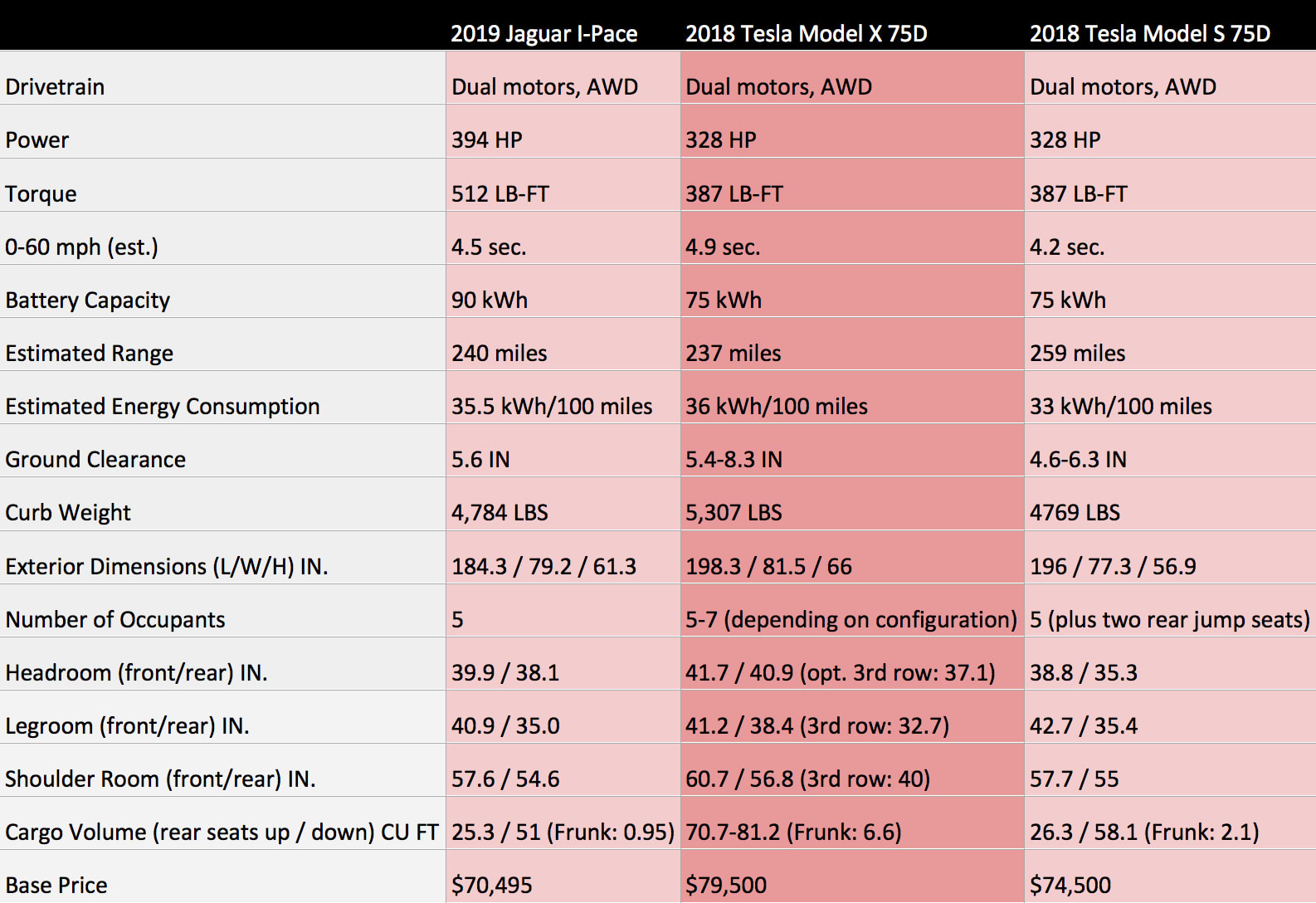 All three of these electric cars use a similar powertrain consisting of two electric motors, one up front and one in the rear to power all four wheels. The Jaguar I-Pace's 394 horsepower and 512 pound-feet of torque is a fair bit more than the 328 horsepower and 387 pound-feet combined power from the Teslas, according to Motor Trend. But in the sprint to 60 mph, the Jaguar doesn't really gain an advantage. It's 0.4 seconds quicker than the Model X, but 0.3 sec. behind the Model S. This is despite the Jaguar weighing about the same as the Model S, and a few hundred pounds lighter than the Model X. 
At 90 kWh, the Jaguar also has a larger battery capacity than the Tesla 75D models, but range is again mid-pack between Musk's cars. At 240 miles, it's just 3 miles ahead of the Model X, and 19 miles behind the Model S. The I-Pace and Model X also are about as hungry for electricity as each other, both with an energy consumption estimate of about 36 kWh/100 miles, while the Model S is the most frugal at 33. All three vehicles have the ability to use DC fast chargers, with Jaguar claiming an 80-percent charge in 40 minutes at a 100-kW charger. But only the Teslas have access to the Supercharger network, and they come with credits for free charging up to 400 kWh at those stations. 
As a result of the Jaguar's smaller size, it's smaller inside than both cars in most ways. Legroom and shoulder room is tighter than the Teslas, and the Jaguar only barely squeaks out an advantage in headroom over the Model S. The Jaguar has a maximum occupancy of 5 people, but the Teslas have options for more. The Model X comes standard with seating for 5, but can be had with a third row and either captain's or bench seating in the second row, bringing the total to 6 or 7. The Model S can seat 5 in reasonable comfort, but there is a pair of jump seats in the cargo area, though they're really only suitable for extremely short trips or kids.

Unsurprisingly, the Model X has the most cargo capacity, which is listed in a strange way because of the wide array of seating available. What's interesting though is that, although the Jaguar is smaller than the Model S, its rear cargo space is still somewhat close the Tesla's. Jaguar's ace advantage is price. It's about $9,000 cheaper than the base Model X, and it's about $4,000 cheaper than the Model S. That's before incentives, though the difference should still be about the same. At least they'll be about the same for now. The federal tax credit of $7,500 for EVs is only available until an automaker sells 200,000 electric cars. Once it reaches that point, the tax credit will drop in half with it later disappearing altogether, and Tesla could hit the mark this year. Once that happens, the I-Pace will have a bigger price advantage.