It previews the production version coming in 2018

When images of the BMW X7 concept leaked, the response wasn't exactly positive. Now that the official images are out, we don't expect things to get much better, as these photos confirm that the officially named Concept X7 iPerformance does bear the controversial styling shown yesterday.

What's so controversial, you ask? Well, primarily the nose of this beast. The full-size, three-row X7 will be one of the biggest BMWs produced, and it has a grille to match. It's shockingly tall, and the height is emphasized by the very slender headlights. It's a bold, brash look that wasn't in keeping with BMW's streak of subtle, conservative designs. Also, some people felt it was reminiscent of buck teeth. The nose wasn't helped by busy flanks, either. Looking past its flaws, you can find some interesting design details, though. The laser lights have "X" designs, and this is the first BMW X model with perfectly round wheel arches.

The interior is a much more restrained and classic place to be. it takes the familiar shapes and designs of current BMWs and upgrades them to be sufficiently futuristic. The dash is still canted toward the driver with climate controls laid out similarly to production models. The instruments have been replaced with a 12.3-inch screen with tech-y blue read-outs. Right next to it is a second 12.3-inch touchscreen for infotainment. 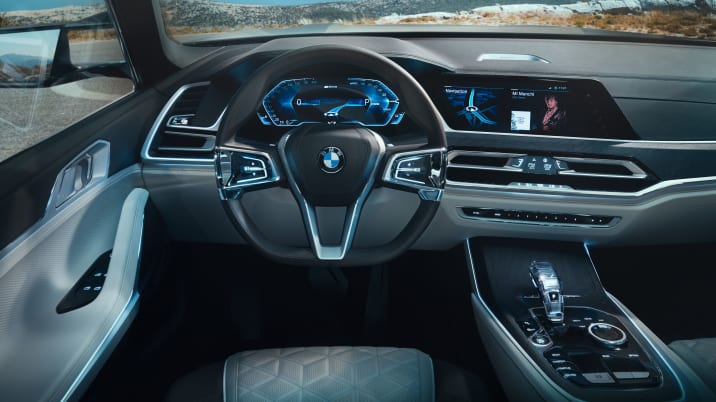 The X7 iPerformance has three rows of seats, but priority clearly goes to the first- and second-row passengers. The seats in these two rows are the same and have plenty of adjustment and leg room for comfort. The second row seats each have touchscreens for accessing individual entertainment or work applications as well. The seats themselves are also fully finished in contrasting white and brown leather with unique diamond quilting. Regardless of where passengers are sitting, they'll all be able to enjoy the full-length glass roof with embedded light strips.

Since this BMW does bear the iPerformance moniker, it's not entirely surprising that there's a hybrid powertrain behind the prominent prow. It's a plug-in hybrid, too, and relies on a turbocharged gasoline engine when not using electricity solely. That's as much detail as BMW will reveal for the time being. Our bet is that it has the same plug-in hybrid powertrain as the 740e iPerformance, which has a turbocharged four-cylinder coupled to an electric motor. In that configuration, the powertrain makes a total of 322 horsepower and 369 pound-feet of torque. It can also propel the 740e on electricity only for 14 miles.

This powertrain will likely show up on the production version of the Concept X7 iPerformance, too. BMW says the production model will be revealed in 2018. It will probably be available with other powertrains besides the plug-in hybrid, as well. We're not expecting the big grille to disappear, though, since prototypes have been seen with large openings up front. Maybe people will warm up to it with time.