View All Specs
In The Love Bug, the main character (aside from Herbie) is a down-on-his-luck racing driver named Jim Douglas. Early on, he steps into an exotic car show room, and when the dealer asks him kind of car he's looking for, Douglas replies, "What do you have in the way of cheap, honest transportation?" The dealer quickly snatches his fancy liquor back from Douglas and soon after Herbie shows up from the back of the showroom. But if this happened today, you could easily replace the classic Beetle with a 2017 Toyota Yaris iA.

The poor thing isn't nearly as endearing to look at as a classic Bug, as a result of the rather unattractive nose, and it's now using a second pseudonym (first Scion iA, then Toyota Yaris iA) to hide its Mazda heritage. However, everything else about it nails the description of cheap, honest transportation. And for that reason, it's a lovely little car.

Let's start with honesty, and it begins from the minute you start equipping the car – the iA is a "what you see is what you get" proposition. You see, the iA moniker isn't the only holdover from the Scion era. The Toyota Yaris iA retains its "monospec" configuration, which means it comes with only one option: the transmission. Customers can choose from either a 6-speed manual like our test car, or a 6-speed automatic which costs $1,100. Everything else is standard, and "everything" includes some choice features. You get alloy wheels, air conditioning, cruise control, USB and Bluetooth integration, a rear-view camera, tilt and telescoping steering wheel with audio controls, and keyless entry with push-button start.

Technically there are a number of dealer-installed accessories too, including your typical fare of mudguards, rear spoiler, cargo organizers, and such. However, none of them are really necessary, with one exception. For some odd reason, the Yaris iA does not come with a center armrest. It's a $195 accessory, and frankly it should be a standard feature because it's so useful. If you hadn't guessed, ours wasn't equipped with it. 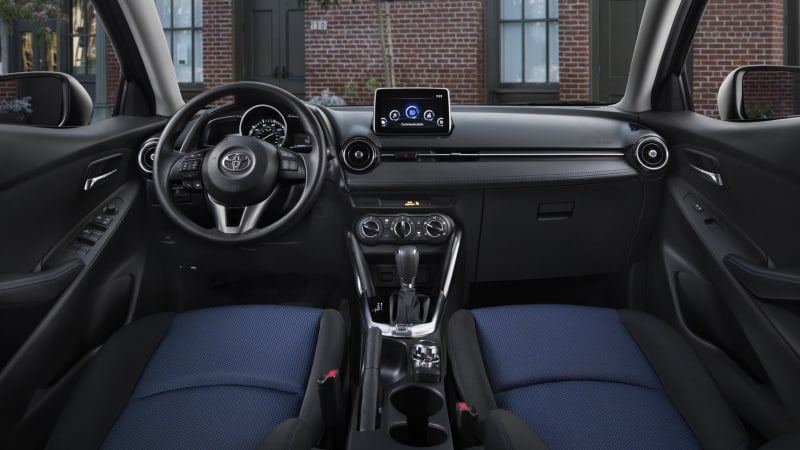 Everywhere else the iA is a thoroughly pleasant car, if not as sporty as the old Mazda2. The little 1.5-liter four-cylinder under the hood isn't particularly potent with 106 horsepower and 103 lb-ft of torque. But with a Miata-like 2,385-pound curb weight and our car's manual transmission, it manages to feel fairly sprightly, and never has any trouble dicing it up with traffic. That transmission is pretty decent, too. It isn't quite as short and sweet as that of the Mazda-badged predecessor, but it still glides into gear with little effort, and the gates are clearly defined and fairly tight.

Where the Yaris iA mostly differs from the previous generation Mazda2 is in ride and handling. While the iA's small size and quick steering give the car a light and generally willing feel, the suspension is much softer, and the car leans considerably when pushed hard in corners. It always feels safe and secure, but its lost some of that front-drive Miata feel of the old Mazda hatch. The good news is that the Yaris iA has far superior ride quality and overall refinement. The car handles bumps with aplomb, and is only unsettled over particularly rough pavement. The iA is also surprisingly quiet, aided by an engine that is one of Mazda's smoother units.

The pleasant dynamics are capped off by a typically high quality Mazda interior. Even though the badge on the wheel is from Toyota, and the gauges and infotainment have been given a palette swap from red and white to blue, there's no hiding the Mazda roots. In fact, the interior is pretty much identical to that of the CX-3, just with less color. That means you get stylish touches, such as that wide air vent that stretches across half of the dash, along with straight-forward controls and instruments. The LCD tachometer is a bit annoying, and can wash out in sunlight, but if you opt for the automatic you won't use it too much. The infotainment is also identical to every other Mazda. It's perhaps not the most intuitive, but works quite well with a bit of practice.

Bringing the package together is a low price that gives the car Scion-style value. If you opt for the manual, as we would, you can take an iA home for just $16,835, or $17,935 with the automatic. Though the Toyota-designed Yaris hatchback starts at $16,530, you'll need to cough up $17,280 for the cheapest five-door Yaris. That five-door is slightly cheaper than an automatic iA, and comes with a couple of extra safety features, but you'll be stuck with 4-speed automatic, steel wheels, no cruise control, a tilt-only steering wheel, and worse highway fuel economy. With that in mind, the iA is very clearly the better choice. It's cheap, honest, and good transportation. It sure could use a facelift, though. 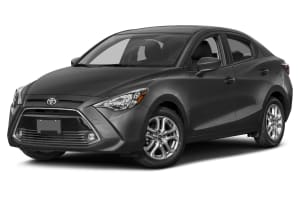