The Kia Niro gets a plug-in model at Geneva The Geneva Motor Show is usually a supercar event, but that didn't stop Kia from showing off the Niro hybrid. A new battery and some minor styling tweaks distinguish this Niro from the current model.

The important part here is in the back of the little crossover. The standard Niro's 1.56-kilowatt-hour battery is replaced with a much higher capacity 8.9-kWh battery. When we test drove the standard Niro, Kia's representatives told us this battery should propel the Niro PHEV about 25 miles on a charge. For the European release, the range is listed as 55 km, which converts to 34 miles. However, this is likely a quirk of European fuel economy testing, which often yields higher numbers than American testing. Regardless, the Niro will have an electric range in the same ballpark as the Prius Prime plug-in hybrid.

The new battery, besides offering more range, is also physically larger. It's placed under the cargo floor and rear seat, and the larger size means the cargo area shrinks by a little over 3.5 cubic feet. However, Kia says that the rest of the interior is unaffected. And an unusual note, Kia will offer a towing package that will allow the Niro PHEV to pull a trailer with brakes weighing up to roughly 2,900 pounds, although it's unclear if this is a European-only option.

The Niro PHEV has a few minor styling tweaks as well. The chrome trim on the front and rear bumpers now has slim light-blue lines along the edges. The black rub strip along the doors on the normal model is now a metallic finish on the plug-in. The headlights are changed, too. Square-shaped projectors take the place of the round units on the standard model.

The Niro plug-in will go on sale in Europe in the third quarter of 2017. We were told by Kia representatives on the standard car's press drive that it would arrive here by the end of the year. 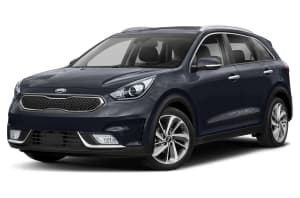