Joel Stocksdale
It's been almost 20 years since the first wide-spread implementation of automotive night vision, which debuted in the 2000 Cadillac DeVille and was developed by Raytheon. Since then, various companies have evolved and improved the technology, and thanks to Autoliv, we got a chance to see where it's at now. The company gave us a BMW X5 equipped with " BMW Night Vision with Dynamic Light Spot," and we were impressed with what we saw.

The BMW uses Autoliv's third generation night vision system, featuring pedestrian and animal detection, which is also used in cars from Audi, Cadillac, Mercedes-Benz, and Rolls-Royce, among others. The system primarily consists of a "far infrared" camera and an accompanying computer that can identify people and critters in view, which is utilized on cars from the aforementioned automakers right now. However, this particular BMW also featured another aspect of Autoliv's night vision system not currently available here: the pedestrian spotlight system. Combined with swiveling spotlights (found in the fog light housings on the BMW), or even using matrix LED headlights as found on Audis, the computer can direct a beam of light to illuminate a person or animal near the road. 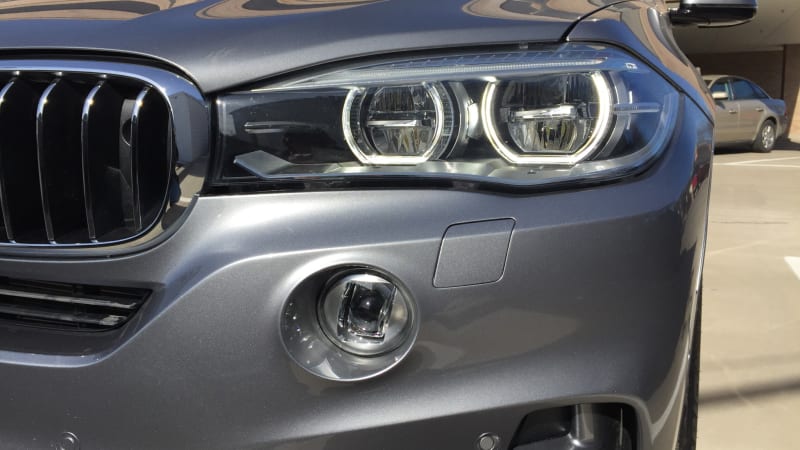 This spotlight feature was the most impressive aspect of Autoliv's night vision technology because it solves a major issue with existing night vision systems, or specifically how they convey information. Most systems only show the view from the infrared camera in the infotainment display or the instrument panel, and require the driver to be looking at the screen to make much use of it. The simple fact of the matter is that, despite the system's improved visual range of 300 to 400 yards, you should be looking out the windshield, not down at a screen, when driving. They're sometimes combined with an alert that appears on the heads-up display, as in our test BMW. This at least lets the driver know when they should be extra careful, and it has the added benefit of being right in the driver's line of sight. Unfortunately, it's very general, and doesn't actually show where the person or animal at issue is.

However, the spotlights solve these issues by specifically highlighting a potential danger, and doing so without the driver having to look away from the road. The light is very bright, and even lights up the road leading to the pedestrian, clearly pointing out people or animals. It also keeps the beam of light on people very steadily and consistently as you pass. It even works at interstate speeds. This editor took the car on a short highway jaunt and the system illuminated someone on the side of the highway at 70 mph, and kept him lit up until the BMW had passed. And don't worry, you won't be blinding every pedestrian on the side of the road. The lights are aimed so that they only illuminate people from the waist down.

As well as the system worked, there were occasionally times when the night vision system would flash on for what seemed to be false alarms, with no people or animals anywhere to be seen. Perhaps during a turn someone showed up in the sensor's field of view just long enough to trigger a warning but vanished before the we could see them. On the whole, the system made a noticeable improvement in our nighttime visibility and situational awareness. Even with the odd false alarm, we think the system is worthwhile and useful.

Unfortunately, while the normal night vision system is available in the US, the very useful spotlights are not due to legal issues. Because the spotlights do at times to avoid putting animals in a trance (think deer in the headlights), they conflict with US headlight regulations regarding flashing lights and are therefore not legal for our roads. Representatives from Autoliv told us that they are working to have the law changed to permit the system. They also said the technology has the support of IIHS and NHTSA, which should help bring the technology here soon.

A final note: These infrared systems may have other uses besides night vision in the near-future. The Autoliv representatives showed us that they could be a key part of the sensor systems used for semi-autonomous and fully-autonomous cars. One of the key advantages being that, unlike traditional cameras, they aren't blinded by direct sunlight or headlights. They can also see through fog and smoke, since they rely on heat. Whether we get infrared sensors here first for night vision or for semi-autonomous tech, the future looks bright for the technology.