Advancing the segment means more than adding a vacuum. In the 1980s, minivans succeeded station wagons as the vehicle of choice to move families. The Chrysler Town & Country, Dodge Caravan, and Plymouth Voyager broke that ground, and Chrysler has owned the segment for most of its existence. Though still popular with practical types, minivans have been ceding ground to crossovers for a while, and after 30 years, minivan evolution has slowed, with only the occasional noteworthy feature like a built-in vacuum making headlines. The 2017 Chrysler Pacifica Hybrid is the next big idea in the segment. In fact, we think its plug-in hybrid powertrain is the biggest minivan idea since the original. Yes, we're excited about a hybrid people mover.

For 2017, Chrysler has reworked, refocused, and renamed its minivan effort, ditching the Town & Country moniker in lieu of the Pacifica nameplate. The odd recycled name aside, it's not only far superior to Chrysler's outgoing minivan, but, with most of the competition several years old, the new Pacifica is easily the current class leader.

But while the minivan's practicality is undeniable, they're not always the most efficient. It's a wonder, then, that no competitor has packaged a hybrid system into a minivan before – especially Toyota, given its dominance in hybrid everything else. Toyota does offer a hybrid minivan in its home market, but the Sienna's only calling card is that it's now the sole American van to offer all-wheel drive, something Chrysler gave up when it started hiding the seats in the floor years ago.

Owing in part to its newness, the non-hybrid Pacifica was already one of the most fuel-efficient minivans on the market, with ratings of 28 miles per gallon highway, 18 city, and 22 combined. Add in the hybrid equipment, with its 16-kWh battery pack providing 30 miles of electric-only range, and the new Pacifica Hybrid achieves an astounding 84 MPGe, trouncing everything else in the segment (because, again, it's the only hybrid van). When working as a hybrid and not in EV mode, the Pacifica Hybrid nets a combined rating of 32 mpg. On a full tank and a full charge, it has a range of 566 miles. 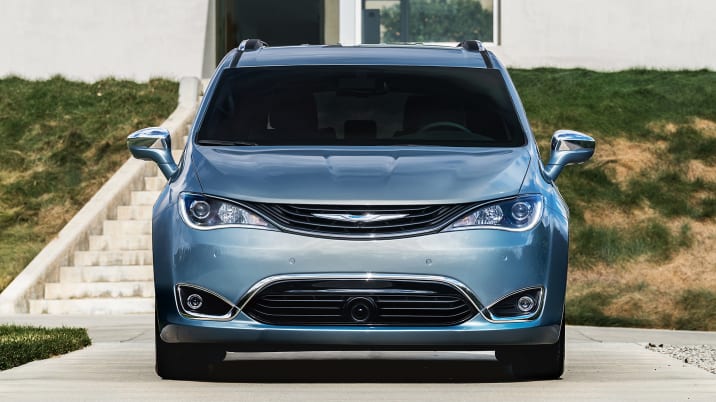 The hybridized version weighs 650 pounds more than a standard Pacifica. That's after some of the added weight from batteries and motors has been offset by a hood, sliding doors, and liftgate made from aluminum instead of steel. The suspension has been adjusted well enough that you don't really notice the added mass driving down the road. The more noticeable impact of adding the battery pack concerns its location – it's stored under the floor, in the space normally reserved for the second-row Stow 'n Go seating when it's in its stowed position, although the third row is still stowable. Buyers will have to choose one or the other – the hybrid or the ability to make some seats vanish without lugging them out by hand – and for some, that may be a deal breaker. As long as you're not hauling full sheets of plywood at the drop of a hat, the tradeoff is definitely worth the 30 miles of all-electric range and improved mileage the rest of the time. On the subject of stowing, there's no available integrated Stow 'n Vac vacuum for the hybrid; it's only included on the top non-hybrid trim.

In normal operation, the hybrid behaves much like the gas-only Pacifica, but there are some differences that should be easy enough to get used to. Like with most EVs and hybrids, careful modulation of the accelerator and brake pedals helps preserve and recapture battery charge. Shifting the Pacifica Hybrid to "L" allows for some short spats of one-pedal driving, slowing the car with the electric motors in regen mode rather than using the brake pedal. Find a big enough hill, like the 9% grade we descended, and you can recharge the battery noticeably – just realize you'll use more energy to get back to the top, because physics doesn't let you break even.

One change that isn't really noticeable is the fully blended braking system. Drivers of early hybrids often complained about the unnatural feel of the braking systems, which made it obvious when they went from regen to mechanical braking. This has gotten better over time, but there are still hybrids available that don't quite have linear brake-pedal response or normal feel, especially at low speeds. That's not true here, as Chrysler engineers have figured out a braking system that both manages the vehicle's extra weight and provides a direct reaction from the pedal.

In electric mode, the Pacifica Hybrid has the quiet and smooth demeanor that's typical of EVs. When you finally run out of juice (or dip into the throttle far enough), the 3.6-liter Pentastar V6 kicks on. It's not the most pleasant-sounding engine Chrysler has ever produced, and that's more evident in contrast to the electric calmness. In this application, the Pentastar runs on the more efficient Atkinson cycle. While that boosts fuel economy, it drops output, which is down to 260 horsepower from 287. It still feels plenty strong, although we didn't get a chance to test the already heavier hybrid with a full load of people and stuff.

The Pacifica Hybrid ditches the standard model's nine-speed automatic for Chrysler's in-house-designed dual-motor eFlite electrically variable transmission. The eFlite features two electric motors that are capable of powering the wheels through a one-way clutch. In practice, the transmission behaves like a conventional CVT, with a mostly seamless handoff between powering the wheels and recharging the battery pack. There is no way to force the system into using just the gas engine to preserve charge like on other hybrids. Chrysler says this is to maximize efficiency and make the transition between power sources as seamless as possible.

Aside from all of the new plug-in hybrid bits, the Pacifica Hybrid doesn't differ much from the standard model. That's no knock, as the new Pacifica shames most everything else in the class. The interior is well designed and well equipped. Standard active noise cancellation makes it so you don't need to shout to third-row occupants. UConnect continues to be one of the better infotainment systems on the market, though this version doesn't yet offer Apple CarPlay or Android Auto functionality.

Looks are subjective, but we think the new Pacifica is one of the most attractive minivans. The general van shape doesn't lend itself to long, low, and wide styling characteristics, but Chrysler designers have managed to make the Pacifica good looking, if not quite beautiful. It's certainly an improvement over the outgoing Town & Country, which looked like a dated rental van from the moment it appeared on dealer lots. 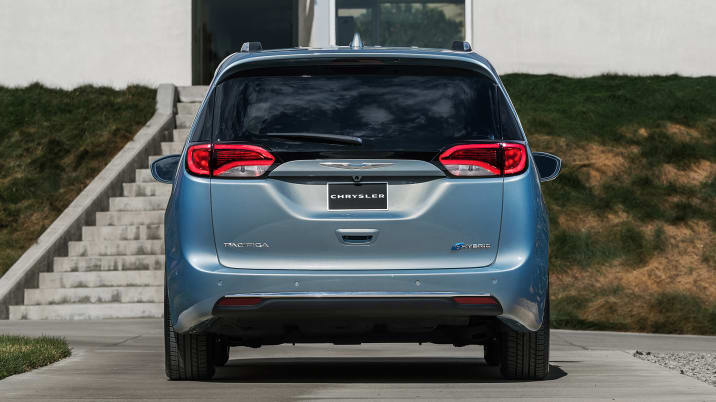 The Pacifica Hybrid has a number of unique styling touches that separate it from the standard model. The front grille – which has active aero shutters behind it to manage airflow – features a teal Chrysler badge rather than a blue one. The hybrid has unique 17- or 18-inch wheels that have obviously been designed for improved aerodynamics. Inside, the tachometer has been replaced by a charge indicator. There are small "e" and "eHybrid" badges sprinkled here and there inside and out.

And of course there's the charge door on the front left fender, behind which lives an SAE standard plug. The Pacifica Hybrid comes with a 110-volt charging cord, which is fine if you have 14 hours to wait. If you have access to a 240-volt charger, the battery can be fully recharged in just two hours. Chrysler's UConnect app allows you to schedule and monitor charge times, and the system even offers a charge station map so you can figure out the most efficient route for your drive.

While we know it's a plug-in hybrid, and the charge door is a pretty good giveaway, Chrysler is keeping surprisingly quiet about that in its marketing efforts, instead simply referring to it as a hybrid. This despite the fact PHEVs qualify for a $7,500 federal tax credit, which definitely seems like a selling point. When asked why the hesitation, company representatives cited market research that showed the term "plug-in" leads to concerns of range anxiety. We think that's silly, so let this serve as a notice to potential buyers: You can plug this van in, and you should. 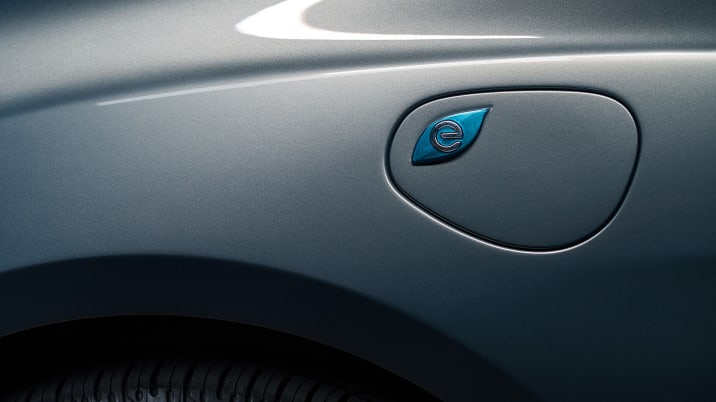 That $7,500 tax credit, along with any additional incentives your region or state may provide, will most likely be the key to success or failure of the Pacifica Hybrid. Chrysler's new van comes in two flavors: a Premium trim that starts at $43,090, and a Platinum model that comes in at $46,090. Both come well equipped, with the Platinum adding items like leather seats, standard navigation, rear-seat entertainment, and a full complement of active and passive safety systems. Because these two trim levels don't completely align with any of the five non-hybrid trims, it's hard to make a direct comparison other than to say the hybrid system adds to the price. But consider this: After the federal tax credit, the Pacifica Hybrid Premium will set you back $35,590, or just $100 more than a similarly equipped Pacifica Touring L. Do the math with the Platinum trim, and you actually come out thousands under the top-tier non-hybrid Pacifica Limited.

Assuming you can take advantage of the credits, the overall cost makes the hybrid a very compelling offering. It drives and handles just as well as the standard model, you can cover a day's worth of errands on electricity alone, it's substantially more fuel efficient even when running as a plain hybrid, and most of the time it's quieter and smoother than the standard model. You do lose the fantastic Stow'n Go seating in the second row, but that's the only real sacrifice.

We're firmly in the hybrid camp. Know that this is coming from someone who likes to drive and who has no nostalgia for minivans, instead growing up in Volvo station wagons and GM SUVs. Most of us in this office are childless, but we still advocate for the practical minivan to anyone who will listen. The Pacifica Hybrid is easily our new top pick for this segment, as it offers something the Honda Odysseys and Toyota Siennas of the world simply can't. And yeah, we're pretty excited about it.