The EV is a new version of the SH-AWD EV concept that won last year.

Acura is bringing two 2017 NSX hybrids to run up Pikes Peak in a few weeks. As exciting as this is in itself, the line that really caught our attention in the PR announcement is that there will be third vehicle, an all-electric one, making the climb alongside its hybrid brethren.

The EV is not an NSX per se, but,"a new NSX-inspired, all-electric 4-motor SH-AWD Concept." First announced back in March, the new EV will run in the Electric Modified Class, and features, "a further evolution of the experimental all-electric, four-motor Super Handling All-Wheel Drive (SH-AWD) powertrain that won last year's Pikes Peak Challenge Exhibition class." All-electric vehicles have been speeding up the mountain track for years now, with Mitsubishi EVs winning their division in 2014. A Tesla Model S will make the climb this year. 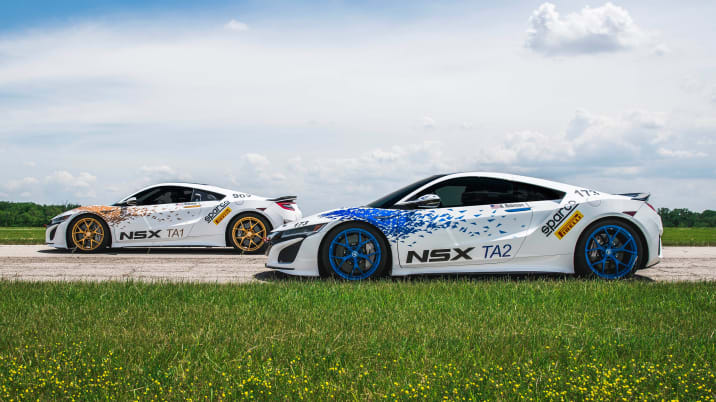 Back to the standard NSX hybrids. They will be driven in the Time Attack 1 and 2 classes by brothers James and Nick Robinson. The vehicles are different, but both use the standard NSX's three-motor hybrid powertrain. TA1 has a lighter chassis and a modified racing exhaust, while TA2 is a standard NSX with some required safety equipment

Last year, an NSX was the pace car at Pikes Peak. 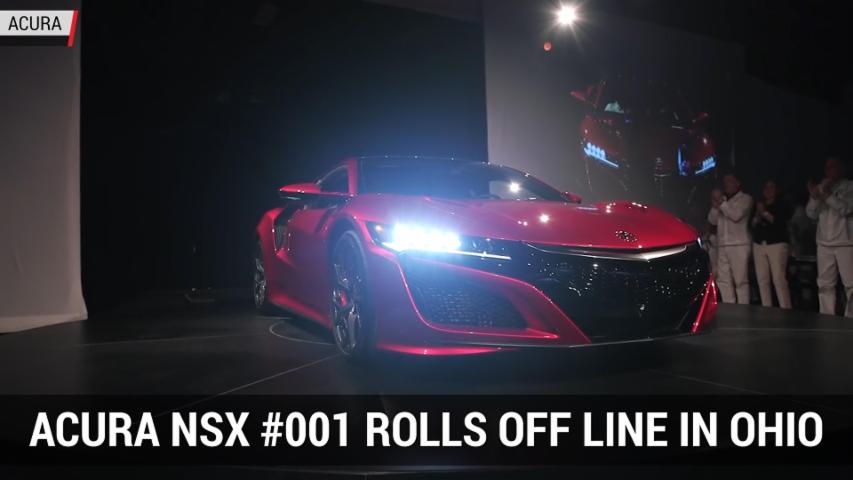 Acura will field a pair of 2017 Acura NSX supercars in the 100th Anniversary of the running of the Broadmoor Pikes Peak International Hill Climb on June 26, marking the North American racing debut of Acura's next-generation NSX: the pinnacle expression of Acura Precision Crafted Performance and the only supercar made in America.

The two Acura NSX supercars will compete in the Time Attack 1 and 2 classes and will be piloted by brothers James and Nick Robinson, respectively, both from the company's North American engineering team. In addition, Acura will campaign an NSX-inspired prototype vehicle in the Electric Modified Class, featuring a further evolution of the experimental all-electric, 4-motor Super Handling All-Wheel Drive (SH-AWD) powertrain that won last year's Pikes Peak Challenge Exhibition class.

"Pikes Peak is like no other race in the world and offers a unique opportunity to showcase the power and performance of our products," said Jon Ikeda, vice president and general manager of the Acura Division. "We are excited for this year's 'Race to the Clouds' to test the endurance and engineering of the Acura NSX and our advanced powertrain technologies – as well as an expression of our racing spirit."

A team of North American R&D engineers has been working on both NSX entries, which feature the same three-motor Sport Hybrid Super-Handling All-Wheel Drive powertrain (Sport Hybrid SH-AWD) as the production NSX. This powertrain features a twin-turbo V6 engine mated to a 9-speed dual clutch transmission and Rear Direct Drive Motor, and a front Twin Motor Unit with a world's first electrically powered torque vectoring capability in the supercar realm. Modifications to the NSX competing in the Time Attack 1 class included chassis lightening and a custom high-flow racing exhaust.

The NSX competing in the Time Attack 2 class is a production car with the required safety equipment for competition. The Time Attack 1 NSX will be driven by James Robinson of the company's North American powertrain development group, who drove a first-generation NSX in the Pikes Peak Hill Climb from 2012 to 2015. His brother Nick Robinson, an engineer in charge of the new NSX's dynamic performance during its development, will drive the Time Attack 2 NSX. Nick is also the reigning PP250 winner from the 2015 Pikes Peak Hill Climb.

The supercar-inspired 4-Motor EV Concept will be driven by Tetsuya Yamano, who campaigned last year's CR-Z-based electric prototype. The EV Concept is the ultimate embodiment of the all-wheel-drive Electric SH-AWD powertrain featuring a world's first technology that enables four-wheel independent torque allocation. The Electric SH-AWD powertrain, an evolution of the CR-Z prototype powertrain, produces three times the total system output of last year's electric prototype and is mated to the NSX body.

As Official Pace Car sponsor, Acura will feature three pace cars – the NSX, the seven-passenger MDX performance-luxury SUV and the TLX sports sedan. President of Polyphony Digital and Producer of the Gran Turismo series Kazunori Yamauchi and Pikes Peak legends Randy Schranz and Leonard Vahsholtz will lead the field of 100 entrants to the top of the 14,115-foot Colorado peak.

For Pikes Peak race attendees, the NSX and other pace cars will appear at a number of pre-race activities, including the popular Fan Fest in downtown Colorado Springs, 5 to 10 p.m. MDT Friday, June 24.

Acura is a leading automotive luxury nameplate that delivers Precision Crafted Performance, an original approach to technology and design that creates a new driving experience. On March 27, 2016, Acura celebrated the 30th anniversary of its launch as the first luxury nameplate from a Japanese automaker.