David Gluckman
Honda is always good for a few interesting Pikes Peak entries. In 2015, Acura supplied a 2017 NSX prototype for pace-car duty. This time around, two NSXes will compete alongside a reconfigured version of the company's four-motor electric racecar.

Those aren't the 2016 entries above. The one on the right is last year's pace car and the one on the left is a first-gen NSX that did the hillclimb the past few years. The 2016 cars haven't been unveiled yet, but we know that one will be in the Time Attack 2 Production class, which is mostly stock with the addition of items like a roll cage, and the other will be in Time Attack 1. TA 1 allows modifications to the powertrain, additional aero aids, suspension changes, and other tweaks, so expect to see a lot more power and a big wing on the back. The cars will be driven by James and Nick Robinson, brothers who work for Honda R&D in Ohio. 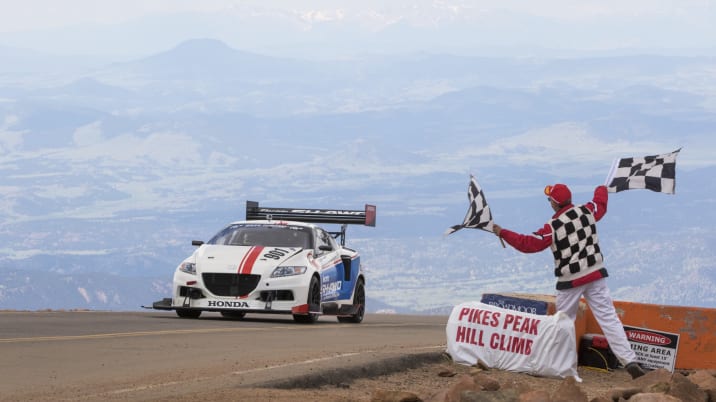 Honda will use a version of the four-motor electric powertrain from its 2015 CR-Z Exhibition class entry in a new EV. (We got to drive a non-race tune of this setup in Japan last year.) The 2016 version, which will wear a different body, moves to the Electric - Electric Modified class of last year's frontrunners. We're told this car is aiming for an overall win at the 2016 race; the CR-Z took 11th place overall in 2015. The EV will again be driven by Tetsuya Yamano, a Japanese Super GT driver.

Oh, and there will of course be a factory entry or two from Honda's Powersports division. Honda engineer Keith Steidl will ride a 2015 TRX1000 ATV in the Pikes Peak Challenge - Exhibition Powersport class.

In the past, Honda has fielded plenty of other neat stuff in the Race to the Clouds. In 2012, it ran an NSX fitted with a twin-turbo V6 from an LMP2 car, and the 2013 race saw the very practical 532-horsepower turbocharged Odyssey minivan join the Exhibition class. The 2016 race marks the Pikes Peak hillclimb's 100th anniversary (but not the 101st running since competition took some breaks back in wartime). We're looking forward to June already.