The 2016 Spanish Grand Prix flipped all the scripts

Race Recap: The 2016 Spanish Grand Prix was full of firsts.

The Monaco Formula 1 Grand Prix circuit and the Hungaroring fly the flag for processional races, yet Spain's Circuit de Catalunya is arguably as bad. Before this weekend, the pole-sitter won the race 19 times out of the last 25 years. The front row of the grid produced 23 winners in the past 25 years. The racing gods edited that script this year, when a first-lap crash and two mid-race strategy changes kept things open until the end of the 66-lap race. 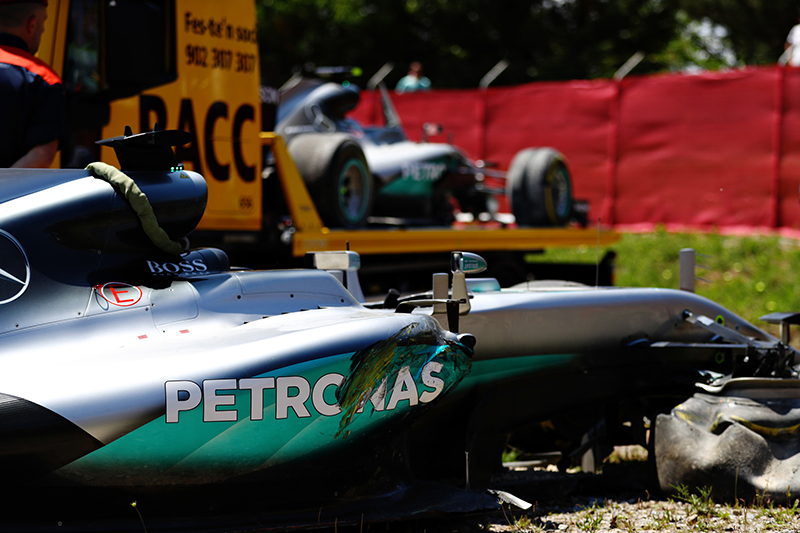 It started when Mercedes-AMG Petronas teammates Nico Rosberg and Lewis Hamilton took each other out on Lap 1. After Rosberg passed pole-sitter Hamilton into Turn 1, Rosberg's car slowed through Turn 3, somehow in the wrong mode. Hamilton closed in on Rosberg so quickly that once the Brit ducked inside for the pass, he couldn't back out. Rosberg, however, closed the door so suddenly that Hamilton had no choice but to drive onto the grass. When Hamilton spun, he collected Rosberg and both Mercedes' ended up in the gravel trap. The stewards deemed it a racing incident.

The crash put Red Bull teammates Daniel Ricciardo and Max Verstappen in the lead, followed by Toro Rosso driver Carlos Sainz and the Ferrari duo of Sebastian Vettel and Kimi Räikkönen. Both Ferraris cleared Sainz by Lap 10, leaving 56 laps for them to haul in the Red Bulls. 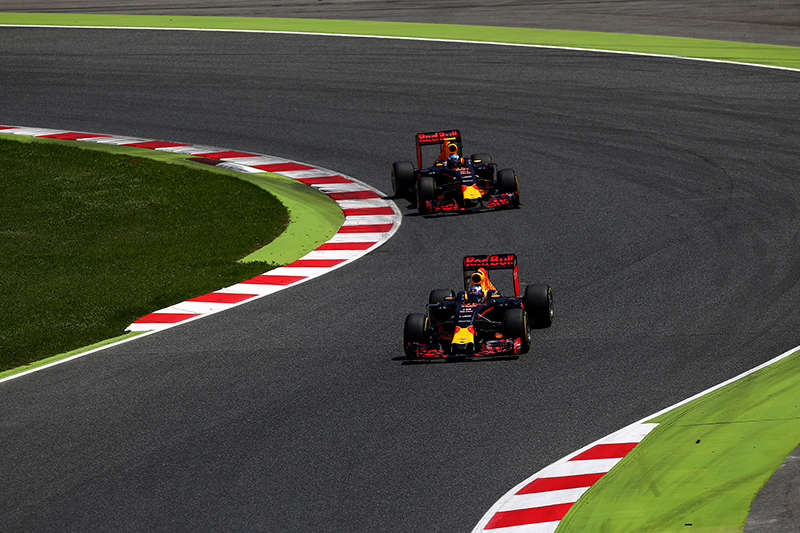 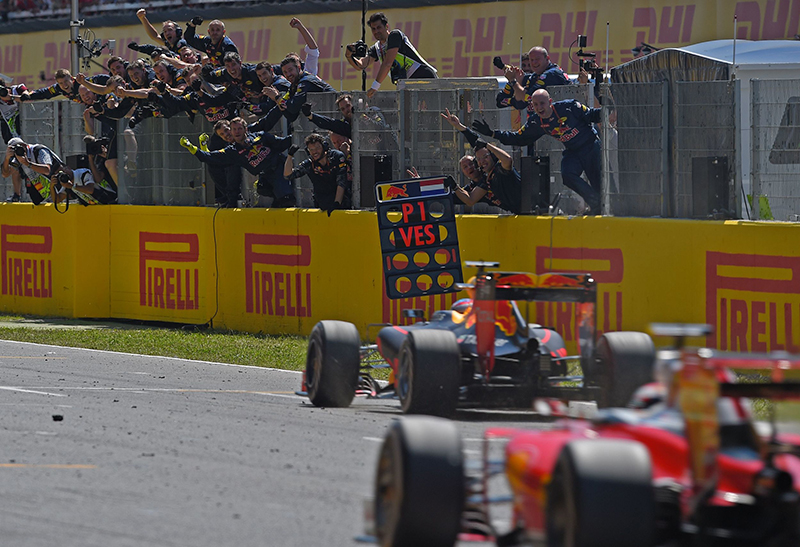 That's when Verstappen – 18 years and 227 days old – proved how good a driver he is, lapping perfectly as second-place Räikkönen closed the gap to a little more than half a second. The Finn still couldn't get past the Dutchman down the pit straight even with the help of DRS, nor under braking at the only real passing opportunity into Turn 1. At the end of Lap 66 Verstappen crossed the line ahead of Räikkönen, a victorious end to Verstappen's first race weekend after being promoted to Red Bull. Further back, Vettel and Ricciardo fought for scraps, the German staying ahead to finish third. The frustrated Aussie endured a late puncture for the second race in a row but managed to finish fourth. 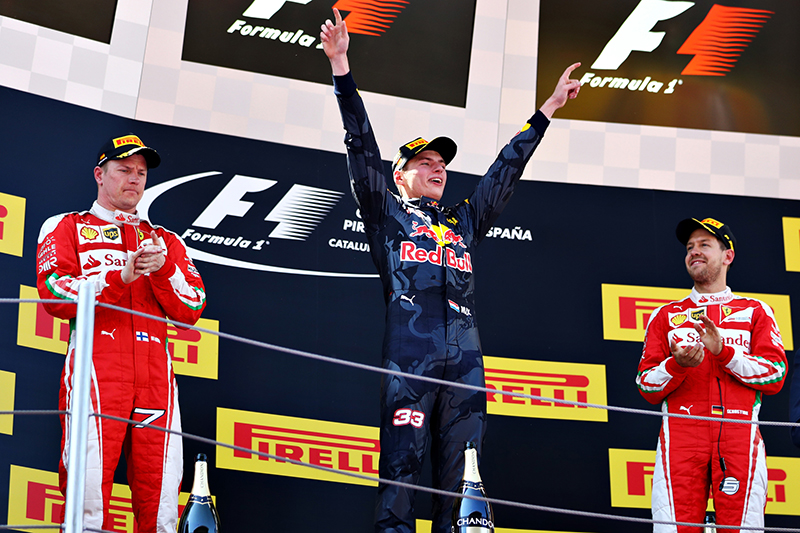 The Mercedes double elimination – the Silver Arrows' first since Australia in 2011 – led to a bunch of firsts. Verstappen is the youngest driver to lead or win a grand prix – Vettel was 21 years old when he won in Monza in 2008 – and the first Dutchman to win a grand prix. Max is the second Dutchman to stand on the podium; his father Jos was the first. Max is the tenth different Spanish Grand Prix winner in ten races there, giving Red Bull its first victory without Vettel on the team. The Red Bull-Ferrari podium meant we didn't hear the German National Anthem for the first time since Spa in 2014, the last time Rosberg and Hamilton clobbered one another on the opening lap. Speaking of Rosberg, the rumor is that Daimler CEO Dieter Zetsche confirmed Rosberg will continue with Mercedes next year.

Over in the red camp, rumor mongers believe Ferrari team boss Maurizio Arrivabene is on the hot seat. The scuderia remains off Mercedes' pace, and now might have Red Bull to deal with as the best of the rest. Fiat CEO and Ferrari President Sergio Marchionne countered the rumor by saying his confidence in Arrivabene is "beyond any question."

Rosberg stays atop the Driver's Championship leaderboard with 100 points, Räikkönen jumps into second with 61 points, ahead of Hamilton with 57. Vettel and Ricciardo are now tied in fourth place with 48 points each.

Mercedes stands pat at 157 points in the Constructor's Championship, Ferrari closes in at 109 points, and Red Bull's 94 points gets it out ahead of Williams. The Mercedes snafu means Williams is the only team left to get each car home in the points so far this year. The next race happens in two weeks, another slow-speed feast in Monaco. We'll see you then. 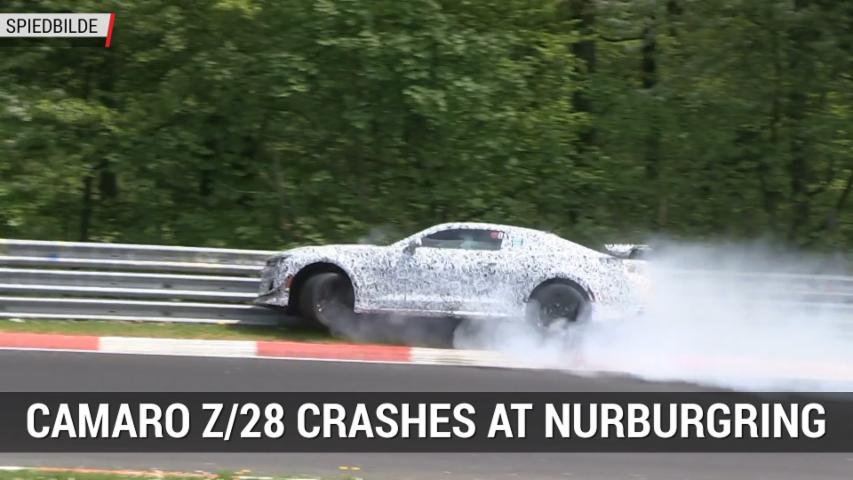