To the end of the world in a Subaru

The story of our epic adventure in Patagonia.

Steven J. Ewing
On a quiet beach in southern Argentina, I stood in awe facing the Desdemona, a massive cargo ship that wrecked ashore in the mid-1980s and has remained untouched for the subsequent 30 years. In the intervening time, Desdemona was not vandalized, nobody broke her down and sold the parts for scrap, and unlike what you'd expect in the United States, no one set up shop to sell memorabilia in addition to a $5-beach entrance fee.

This is only one of a thousand gorgeous vistas that make up Patagonia, the southernmost part of South America and, indeed, the end of the world. I was there to drive Subarus along dirt two-track roads and gravel highways on an epic journey from El Calafate to Ushuaia. Subaru would have you believe that this sort of rugged wilderness is the natural habitat for its cars. Whether or not that is a stretch, the Subies proved to be up to the task of trekking Patagonia. But I fully expected that from the get-go. What I didn't expect was how every part of this journey – the cars, the location, the people – would combine to form one of the greatest travel experiences of my life. The end of the world.

Patagonia is gorgeous, vast, brilliant. And those words don't even really do it justice. The plains, the lakes, the mountains, the forests all feel like every color is more vibrant, every detail is sharper. It's like looking at the world through an Instagram feed, and then realizing that every photo has the "no filter" hashtag.

The journey started on Valentine's Day, with senior video producer Chris McGraw and I flying to Atlanta, followed by a 12-hour flight to Buenos Aires. That's where we met the rest of the group, and spent a day relaxing and exploring the Argentine streets and shops.


"It's like looking at the world through an Instagram feed, and then realizing that every photo has the 'no filter' hashtag."

But we still weren't at our start point. From Buenos Aires, we hopped a flight to El Calafate, about 1,500 miles southwest. It's a common entrance point to Patagonia for tourists and explorers because of its proximity to the Perito Moreno Glacier, a stunning site we visited the next day. Watch our earlier update video to see more about the glacier – an ice formation three times the size of Manhattan (and growing!). If Patagonia is on your bucket list of vacation destinations, this glacier is a mandatory stop. There's a boardwalk that runs along the lakes, leading right up to the face of the glacier. 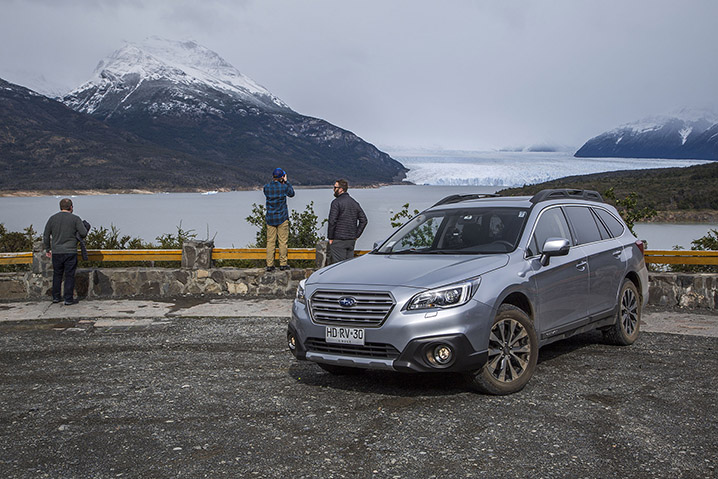 From the glacier, we drove across the high plains and into Chile, at a border crossing that looked more like an old-world trading post than a traditional guarded entry point into another country. Shepherds guided us across the border and into the Chilean wilderness, where a long drive down dusty trails led us to our next stopping point, just outside the Torres del Paine National Park.

We spent two days here, at Tierra Patagonia – a hotel so remote it doesn't even have a mailing address, just coordinates on a map. There was just enough wifi signal to tell our coworkers that we wouldn't be responding to emails, and cell service was faint at best.

But a place like this begs you to disconnect and just take it all in. Once inside the Torres del Paine park, we were stunned by the beautiful mountains, lakes, rivers, and winding dirt roads that linked all the other picturesque parts together. No matter where we looked, there was something gorgeous to behold. 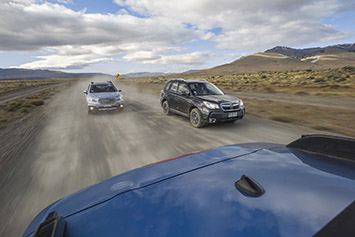 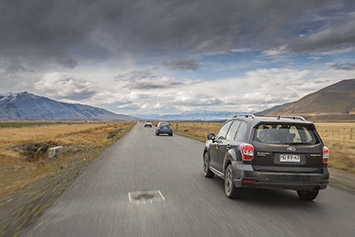 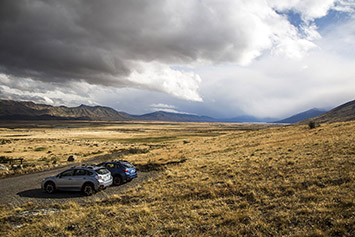 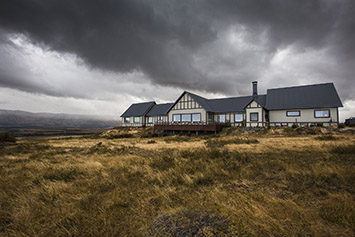 I could have stayed at Torres del Paine forever but, alas, the caravan of Subarus moved on toward the port city of Punta Arenas, where we'd get a good night's sleep and carry on the next morning across the Strait of Magellan. Two hours on a car ferry was made better with good conversation, hot coffee, and sightings of dolphins and penguins. A long, winding drive down the Chilean coast once again brought us back into Argentina, past the site of the Desdemona (which you can actually see via Google Earth), and down to our final destination in Ushuaia, the southernmost city in the world. Look at it on a map – from Ushuaia, it's only a two-hour plane ride to freaking Antarctica.

At the end of the earth, I got an overwhelming sense that I had accomplished something amazing even though there's no paradise, no pot of gold at the end of the rainbow. Just a charming little town with a surprising nightlife scene (thanks for all the beers and broken-Spanish conversations, locals!), set against a dreary and dilapidated backdrop. By the end I was exhausted. But the cars acted like they had barely broken a sweat. 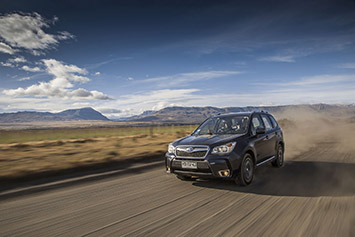 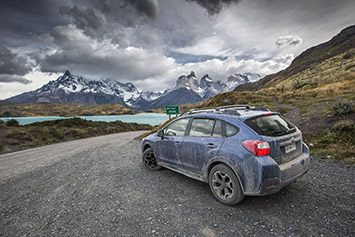 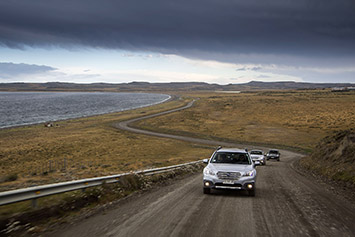 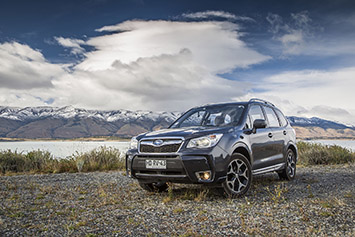 It's important to note that the test vehicles weren't specially prepped for the journey, and they weren't even brand new. The crew of six Subarus – two each of the Crosstrek, Forester, and Outback – came straight out of the Chilean press fleet, all with roughly 10,000 miles of wear. Two chase trucks followed carrying extra fuel and tires, and we used every bit of the spare rations. There was an ominous moment when, with only two-thirds of the driving completed, the handlers informed us that we had already blown through the total allotment of spare tires. One wrong move and we'd have to leave a car, and maybe people, behind.

The big rocks and loose stones that make up Patagonia's vague definition of roads took their toll on the cars. Every windshield was cracked, body panels were scraped, foglights destroyed. I'm sure there's a layer of mud and grime on each car so thick that it'll never come off in places. We never washed the vehicles aside from leaving them in a small rainstorm, so the coat of Chilean and Argentine dust stuck on like a badge of honor, right up until the end. 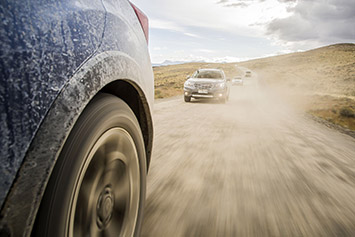 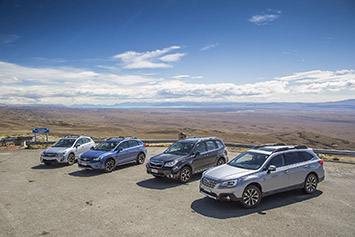 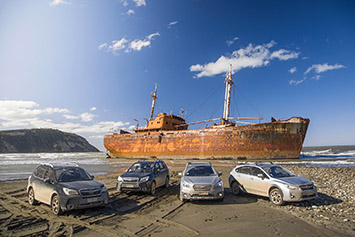 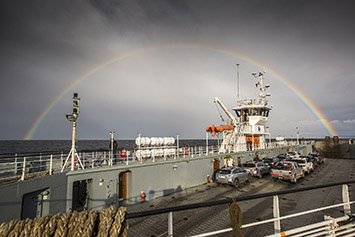 On the few stretches of paved road, the Subarus were quiet and comfortable. Every car was filled to the brim with people, their stuff, camera equipment, spare tires, and more. Thus burdened the cars still climbed every hill, and kept us steady along every loose-gravel mountain pass. It's one thing to drive on a narrow, one-and-a-half-lane road along the Chilean coast, a huge drop directly to your right, and a semi-truck coming right at you. It's another to pass that truck with confidence while in the comfort of a heated, leather seat, and your favorite Jawbreaker album streaming via Bluetooth audio.

If I had to pick a favorite, it'd be the Crosstrek. The ruggedized Impreza wagon blends the right amounts of toughness and convenience, and it was the most fun along the gravel roads. (Now imagine if it had a WRX engine.) The Forester felt like the workhorse, its turbocharged 2.0-liter offering plenty of grunt for the winding roads leading up to the Perito Moreno Glacier and for climbing the steep hills inside the Torres del Paine park. The Outback, largest and most expensive of the lineup, was the most comfortable – tons of room inside, and enough luxury to make this trek feel like a first-class affair. 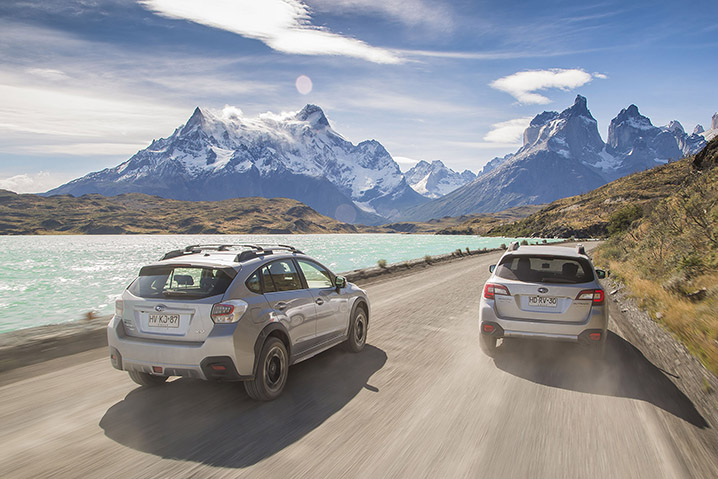 Patagonia is amazing no matter how you get there. Whether it's on a plush, guided bus tour or on your own with just a backpack and a smile, the scenery is a treat for all senses. When the group celebrated the end of the run at an Irish pub in Ushuaia (that played nothing but 1990s American alt-rock), it felt more like a team gathering than anything on the usual smiles-and-small-talk press junket. We were all riding on a sense of accomplishment from the long journey. Weeks after coming home, I haven't stopped thinking about this trip. And I haven't stopped smiling.

I'll probably never see the Desdemona again, and few in this world will ever get to see her beauty, washed up on the beach. But it's comforting to know that she's already made it 30 years, allowed to rest peacefully. Here's to the next 30, and to the hope that her next round of visitors drive right up alongside her, Subaru or no.
X