Above the Arctic Circle, you can start to think the big thoughts. The only thing I 100-percent trust a machine to do is to fail, eventually. Everything will someday mess up, someday give up, someday end. Atrophy is just the way of the universe. So why are the engineers at Volvo working so hard to fight this?

Cars, like so much modern technology, can be read as an attempt to fight back against our mortal future. They take us farther and faster than we were born to go. They're bigger and louder than we are. They can be so shiny and new, and they will outlast us. Put a dead car and a dead body in the woods and check back in a decade to see how much of each one is still there. All of this struggle against reality doesn't mean that cars are bad things, but we just need to put them and their mission into perspective. You couldn't ask for a better place to do that than in a Volvo S90 prototype on a closed-off test track north of the Arctic Circle.

That's where I went last week, to the Volvo Vehicle Test Center in Northern Sweden. Something about the freezing temperatures and the endless stretches of snow-covered pine trees, fading blue and grey into the horizon in every direction, made the whole experience more philosophical than I was expecting. Being on an isolated reserve the size of Manhattan with way, way more reindeer than people can do that to a guy. 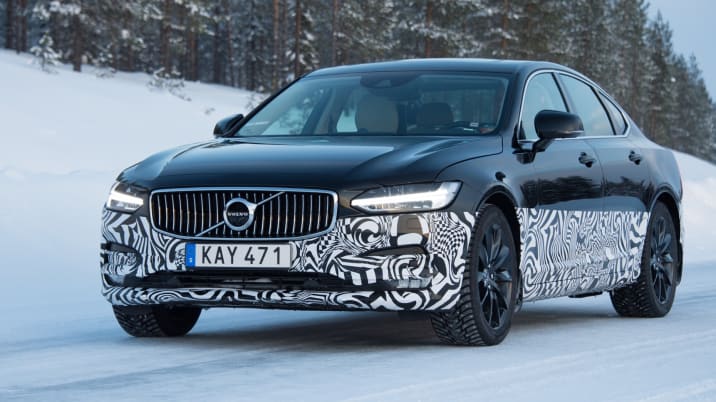 Volvo has been working towards zero fatalities since 2008.

Let's start with Volvo's philosophy. Besides the company's powertrain plans or how its new Scalable Product Architecture (SPA) will change the way the Chinese-owned Swedish company will make cars, Volvo engineers think a lot about safety. And the marquee idea here is that no one will be killed in or because of a Volvo in the not-too-distant future. The target had been set at 2020, but that's no longer set in stone. Volvo has been working towards zero fatalities since 2008 and despite a bit of equivocating, has not stopped working on its pledge. Besides the impressive semi-autonomous driving tech that is coming to next-generation Volvos, you can see the company's philosophy at work in things like external airbags and how Volvo has already said it will take responsibility for any accident its self-driving cars get into. So, despite the fact that sometimes, things just don't work, Volvo is moving forward on its goal. I'm glad they are, but when you're standing under the endless Swedish winter sky (and even though it feels like an obvious cheap reference), you wonder if Ingmar Bergman wasn't on to something.

But then you get into the S90. While the car was revealed last December, Volvo put a bit of camouflage on the prototype sedan's clean Scandinavian design. Thirty of these TT (Tool Tryout) prototypes have been built so far, out of a planned 50. The single unit we were all sharing that day on the track last week was the fifth one built (it was made back in October) and already had 7,000 miles on it. Volvo engineers drive their test cars 24/7 up in northern Sweden as well as in hot weather conditions in South Africa. 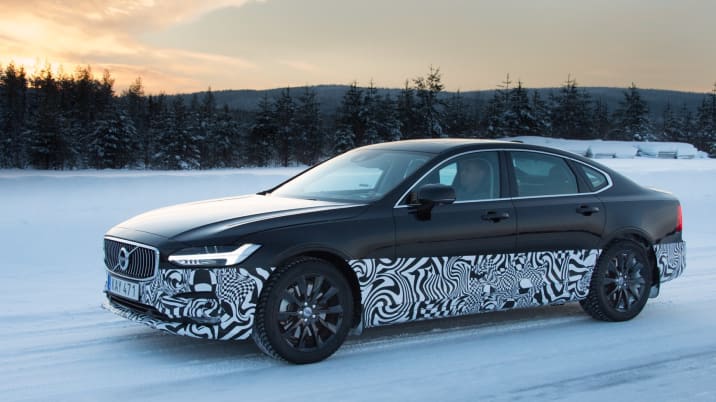 Can tech really save us from ourselves, letting us one day die of old age in a pine forest?

Volvo had more than the S90 at the track. We were also able to take an XC90 and XC60 for laps. During our day on the snow-covered track, one of the test cars – an XC60, I believe – lost its fight against the laws of physics. Given the thoughts I was having about failure, I was glad I wasn't driving. It was another journalist under the encouragement of Volvo's senior vice president of research & development, Peter Mertens. When I went on a lap with Mertens later in the day, he gleefully "found the limit" of what the XC90 T6 AWD could do by increasing the speed bit by bit and confidently moving the steering wheel back and forth until he felt the wheels about to slip. "There," he said, and then proceeded to give the cars traction-control system a workout at 100 miles an hour. I will say that the car managed the skids surprisingly easily. I never did the same test at that speed – I just haven't built up that trust in a vehicle's abilities, and I'm glad I didn't. When Mertens was riding shotgun and encouraged the other journalist to test a car at faster and faster speeds, it all worked well until, so the story was told later, he just said, "too much" and then there was a crunch. Luckily, the smash was into the snow bank and didn't hurt anyone or the car all that much. When a machine fails, it should happen on a test track, but we all know that no matter how many back-up systems Volvo installs into a vehicle, they will all some day fail and kill someone. Right? Can tech really save us from ourselves, letting us one day die of old age in a pine forest?

Watching the S90 T6 barrel through the snow on its Nokian 245/45R18 studded winter tires was just plain fun. Driving it was even better. If you've driven the XC90, then you have an idea what the S90 is like, because the S90 sedan and the XC90 CUV share 70 percent of their components (by part number). The S90 is the second vehicle built on the insanely flexible SPA architecture, with the width, height, and length of the final product all changeable. All SPA vehicles will use the Drive-E powertrain comprised of a 2.0-liter inline-four and then offer incrementally higher levels of assist depending on options. The T5 uses a turbocharger and gets 254 horsepower, the T6 adds a supercharger to the turbo and gets 316 hp, while the T8 has a plug-in hybrid configuration that adds a 67-kW motor to the T6 engine, good for another 87 hp. The S90 uses the same 9.2-kWh li-ion battery pack as the XC90, which will offer more than 28 miles of electric range (using the European NEDC test scale, which always results in higher numbers than the EPA's test in the US).

Official fuel economy figures for the S90 are, of course, not out yet, but Volvo estimates the T6 AWD will get around 26 miles per gallon. The AWD or FWD T5, should it come to the US, will get 28 mpg. No one would even hazard a guess about the T8. 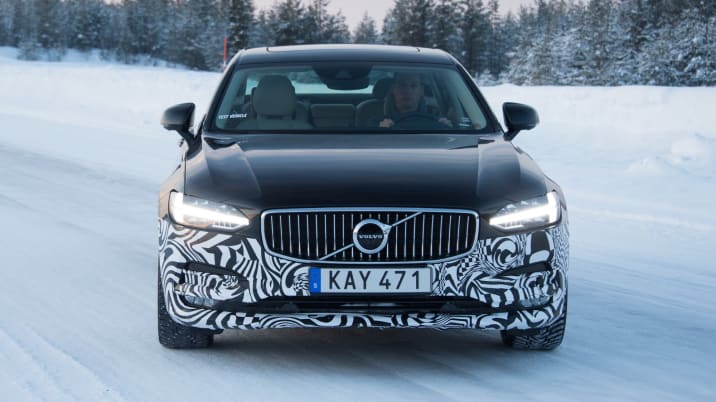 I let my mistrust fall away and got the S90 up to 100 miles per hour on the snow.

Sitting inside the S90 is where I first began to wonder if maybe Volvo will, indeed, manage to design a car that doesn't even kill someone. We'll set aside the long-term emissions and production questions for now and look just at the standard and optional safety tech. There's a lot. Drifting off-the-road mitigation. The ability to detect pedestrians, vehicles, cyclists, and large animals. Semi-autonomous driving. The S90 can even receive slippery road hazard light alerts from an outside network (in Sweden and Norway only). There's also automatic braking, a driver rest warning system, and lane departure warning. The easy-to-use center touchscreen is intuitive like a smartphone. A rear collision warning can flash the brake lights if a vehicle approaches too fast. But all of this isn't news. What's news is how it feels on ice.

The T6 has an active all-wheel drive system, and once I made sure there were no reindeer in the way, I let my mistrust fall away and got the S90 up to 100 miles per hour on the snow. This was new for me. While I didn't try to get the car to spin out at that speed, I did do it at around 60 mph, throwing the steering wheel back and forth on a safe (read: wide) part of the track. You barely notice when the electronic stability control kicks in, but it most certainly does the job. You can override the ESC, but the S90 was the most stable car I've ever driven on ice. The idea here, per the automaker, is that the car should act like a Volvo, in that it is controllable, predictable, and comfortable in winter over ice and snow just like in summer. You should feel relaxed and safe no matter what. I almost want to believe. 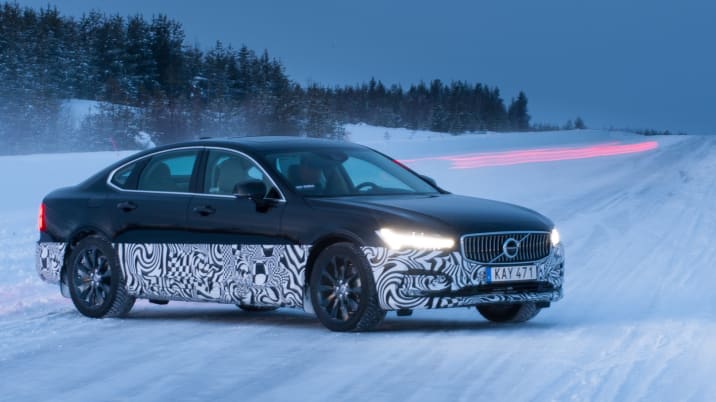 Of course, no matter how good Volvo makes the S90, whenever Volvo changes some important dimension of the SPA for future models – lengthening the wheelbase by an inch, for example – the engineers will then need to rework all of the safety software for the new configuration. This means that testing will never be finished (unless Volvo decides to never, ever change it model lineup once it's got things set in stone). We know that's not going to happen. The struggle against harmful physics will continue.

I have one last example of Volvo fighting against what the rest of us might think is a simple fact of nature. Sitting alongside the test track there above the Arctic Circle are a handful of what look like squat shipping containers. They're not temporary garages for the test vehicles, as I thought as first. No, they're cooling chambers. Yes, Volvo operates giant freezers that far north. Because sometimes it's just not cold enough up there. The average temperature in January in a nearby town is about six degrees Fahrenheit, but these boxes can be turned down to -31 F. When you can't rely on Mother Nature to make your northern testing grounds cold enough, you stick a car in there for a few days and then immediately test it to see if there are any unexpected sounds or broken things. If you want to prepare for every eventuality, then this is sort of thing that Volvo engineers need to do. Good luck to 'em.