The Acme Of Possibility In A Small Hatchback

View All Specs
Add a Review
Originally RS meant Rallye Sport, a series of badges on some tweaked 1960s German saloons. Ford's first real RS model was the 1970 Escort AVO RS1600 twin cam, assembled at the company's former skunkworks at Averley in East London (hence the AVO moniker). These rally specials were built, as former Ford PR supremo Walter Hayes used to say, "to win on Sunday and sell on Monday." As road cars they were sensational, if fragile and cripplingly expensive to run.

The RS was mainly a European rallying thing, particularly in Britain where the badge has huge cachet and prized RS models change hands for many times their original price. While RS models might have been expensive Fords, there were cheap compared to the exotica they could run rings round. Blue-collar supercars, they called them like a Mustang, but much smaller and much more capable on Europe's twisty roads.

Ford Motorsport's direct link with the RS badge lasted until 1992 and the mighty Cosworth Escort RS (also the last all-wheel drive RS model). After that Ford's marketing department took over the RS badge, but it wasn't all bad. Since then RS has become an important auto-da-fé for Ford's production engineers whether it's on the rump of a Fiesta or a Focus. Each of the previous two Focus RS models have been the acme of the possible in a small hatchback. This 2016 Focus is no different, although its searing turbo power requires all-wheel drive, just like the old Escort Cosworth. 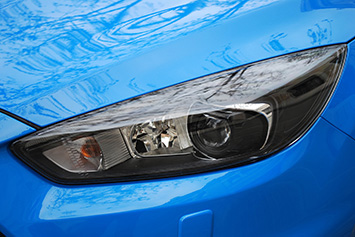 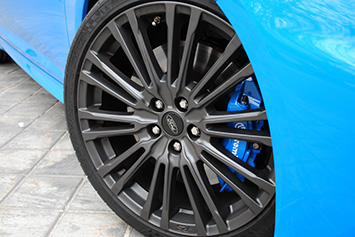 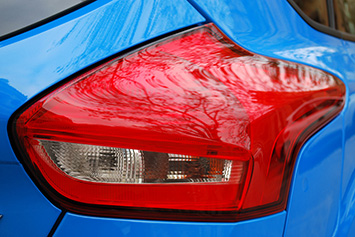 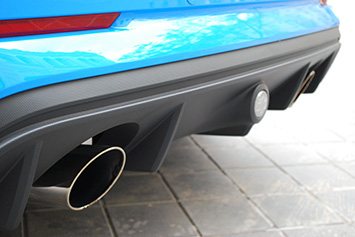 If you drift it every day, the systems remember and politely ask you to change the differential lubricant at shorter intervals.

Thanks to a platform formerly shared by Volvo and Ford's Escape, the Focus RS has room for a propeller shaft down the middle of the car and a rear subframe that can support a drive unit. Similarly to Audi's Sport Differential and Acura's SH-AWD, the Focus RS has a clever rear axle/drive unit (made by GKN), which rotates the rear driveshafts 1.8 percent faster than the road speed, but controls that speed via two multi-plate clutches (one for each wheel) that can individually close to distribute power side to side. Incidentally, that torque-vectoring diff is what makes the Focus RS' "drift mode" possible.

There are four driver modes: Normal, Sport, Track, and Drift. Each successively hardens the responses of the steering, throttle, damping, all-wheel-drive system, stability control, and exhaust noise. Drift softens the steering and damping, but drives the outside rear wheel harder to unsettle the tail and enable you to emulate a Ken Block gymkhana for 30 minutes until the tires burst or the heat build-up in the clutches causes the system to shut you down. And if you drift it every day, the systems remember and politely ask you to change the differential lubricant at shorter intervals.

All RS models with the exception of the 1988-1990 Sierra RS Cosworth sedans have been two-door shells, but this car is a standard five-door Focus body sold worldwide. It's strengthened to suit its performance task and the multilink rear suspension and GKN axle that occupy the space normally taken by the spare-wheel well. To look at, then, this is a far cry from the bewinged, Day-Glo monster that was the second-generation Focus RS that never came stateside. By comparison the new RS even looks a bit boring from some angles, but the specification sheet is a firecracker. 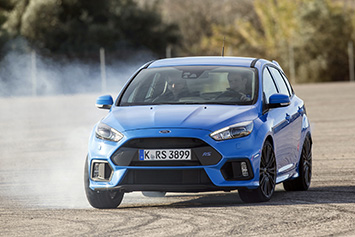 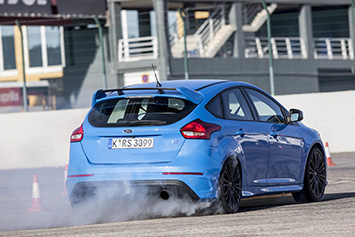 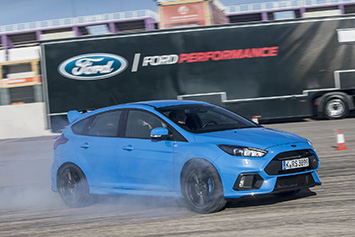 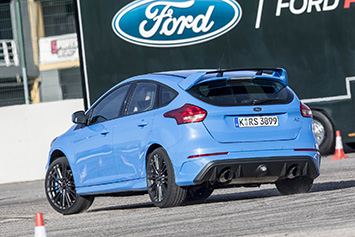 Apart from a few RS badges and a bit of blue stitching, the rest of the cabin is as black as a bad cowboy's hat.

Under the hood is a 2.3-liter turbo four-cylinder from the Mustang with new liners, an alloy cylinder head courtesy of Cosworth, and an all-new Honeywell twin-scroll turbocharger breathing through an intercooler cooler the size of suitcase. It has variable cam timing and direct fuel injection, and drives through a beefed-up six-speed manual transmission with a shortened gearshift. Brakes are by Brembo, with massive front monoblock calipers – the biggest they can fit inside the standard 18-inch wheels, though that's just for snow tire or snow chain fitments – pretty much all US spec cars will come on 19-inch rims.

Climb inside and the cabin is a bit of a letdown. The Focus was all new in 2011, so despite a recent refresh the interior is five years old and shows it, especially in the center console and sat nav screen resolution. Nor is there over much to indicate that you are sitting in one of the most powerful mass-produced Fords. On the one hand, the seats are figure-hugging Recaros and there are a set of three ancillary gauges peeking out at you from the top of the dash like frogs peeking out of the swamp. On the other, apart from a few RS badges and a bit of blue stitching that's it, the rest of the cabin is as black as a bad cowboy's hat. 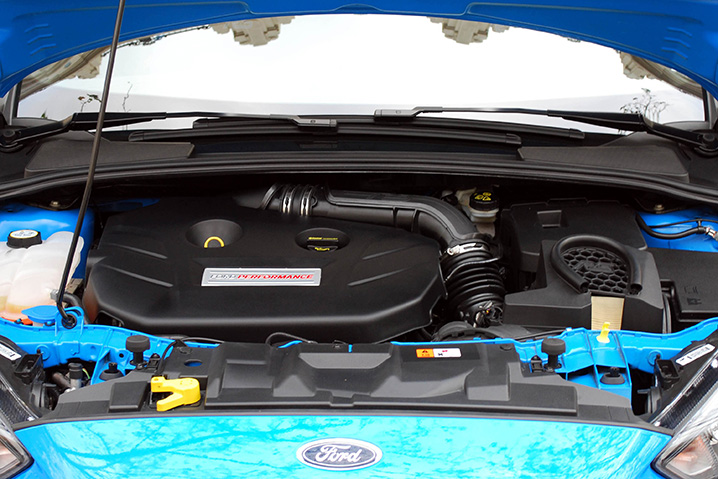 Throttle response is slightly delayed, but the surge of torque is so magnificent that you barely need to downshift.

Did we mention the options list? At $35,730 the RS is something of a bargain, but add in any paint color other than black (something sounding familiar here?), hard-backed front seats which you need if you want to give your rear passengers any kind of leg room, or even a sat nav and a glitzy Sony stereo, and you're speeding past $40k so fast you'll barely see it.

"It's easy to position, it's easy to control and it's fast!" says Jurgen Gagstatter, chief program engineer. Yeah, and it does donuts at a flick of a switch. We know this is childish, but out of sight of the Ford chaperones, we dialed in the sauciest setting on the driving menu and turned circles in a deserted parking lot. Experienced donutters will attest that it's not so much getting the tail out, or even so much holding it there, but getting it back without spinning in front of your admiring audience that makes it so difficult.

It seems like the Focus is incredibly easy to hold, and recover from, a drift, but the truth of the matter is that it's all happening so slowly you're not really in much danger. Besides the likelihood is that, for most owners, the Drift button will stay firmly unpushed – would you really do this to your own car? Maybe once or twice, in the beginning. 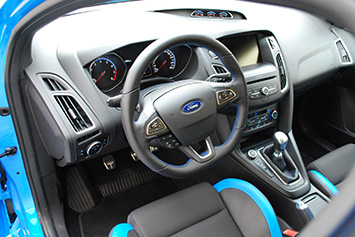 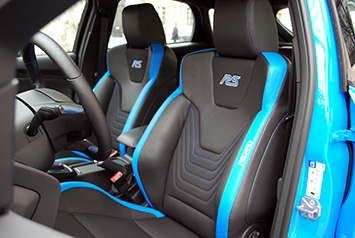 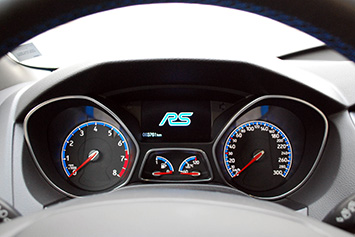 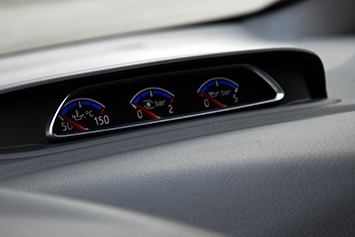 The steering feels slightly woolly and lacks the finesse of RS models of yore, but it's fast and mostly accurate, with a meaty weighting.

Out on the road, dial in Sport and the exhaust adopts a rasping blare wilder than the lead trombone in a strip-club band, and the turbo ensures a seamless charge all the way to the red line just beyond 6,500 rpm. The sound is as artificially enhanced as the engine's power output, but this car undeniably quick and effective. Throttle response is slightly delayed, but the surge of torque is so magnificent that you barely need to downshift. If you treat the throttle lightly, you'll see the right side of 25 mpg.

There's launch control, which optimizes the all-wheel drive, torque delivery, traction systems, and damping to give the fastest getaway. It feels a little antiseptic to be simply flooring the throttle and side stepping the clutch instead of balancing the two in a virtuoso display of driving skill, but it works.

Torque vectoring through that GKN axle and the brakes means that Ford has dropped the ST model's variable ratio steering rack for a fixed-ratio faster rack, which it claims gives greater feel and sensitivity. Through a series of long bends the RS flows beautifully and feels gorgeous, but tighter corners demand precision and determination to turn in accurately. That steering feels slightly woolly and lacks the finesse of RS models of yore, but it's fast and mostly accurate, with a meaty weighting.

The new RS gets to you: We drove this car a couple of weeks ago and are still thinking about it.

Ford has worked hard to banish understeer and you can feel the car shift power to the rear wheels to try and turn the nose in. If you saw at the wheel, the Focus RS will understeer. The ride is best described like a sea forecast; firm and choppy. Tolerable on a newly surfaced interstate, get off the highway and your back will chafe against the seats, and concrete expansion joints will have the specially-developed Michelin tires reporting like pistol shots. That said, those tires relinquish grip so smoothly and progressively you'll forgive them quite a lot.

Out on the track on even stickier optional Michelin Cup tires, the RS is still as fast and so adjustable and well mannered. While it understeers slightly, the way it barrels out of a corner is something that its German rivals would struggle to match. Almost as remarkable are the progressive and ultra powerful brakes that throw you against the seatbelts time after time. In the interests of product liability there's no 'everything-off' setting, which is a shame as the RS is such a benign thing. As UK rally star Roger 'Albert' Clark used to say of the Escort: "Unless you're looking out the back window, you're not going to spin it."

All-wheel drive has taken away some of the purity of previous Focus RS models, but in turn have added handling certainty and great fun. The new RS gets to you: We drove this car a couple of weeks ago and are still thinking about it. Without the RS history, in the US no one will know what it is save keen-eyed enthusiasts. Given most will only ever see the exhaust disappearing into the distance, the Focus RS is going to remain something of a mystery, which all makes it all the more appealing. It goes on sale in the spring, so do form an orderly line. 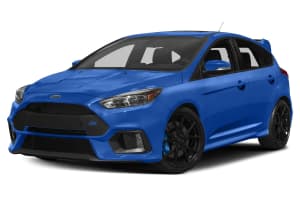