Weekly Recap: Ford plans a hybrid F-150 and maybe a diesel, too

Plus: Notes On The Blue Oval's Autonomous Tech, Rinspeed's CES Concept, And The 2017 Acura NSX

Ford has secrets. Like all big companies, it closely guards its future product plans, but this week CEO Mark Fields was feeling chatty. Want to know what's up with the F-150? Just ask him.

"Yes, we're working on electrified F-Series, and it's really around a conventional hybrid," he said on NPR's All Things Considered.

That's a big deal, to put it mildly. The F-150 is Ford's single most important vehicle. It's the Blue Oval's top seller and a profit machine. F-150 powertrain details are the equivalent of Ford's nuclear codes.

Fields' revelations are not surprising when viewed through a broader lens. The company is spending $4.5 billion on electric vehicle development in the next five years, which will allow it to add 13 new EVs during that time. By 2020, 40 percent of Ford's nameplates will be electrified. It makes sense that the company's flagship products would be a part of this strategy, which includes plug-in hybrids, traditional hybrids (non-plug-ins), and all-electric vehicles.

It was an interesting week for the F-150, as spy shooters also captured a suspicious test mule roaming the streets near the company's Dearborn, MI, headquarters. The prototype appeared to be a running diesel engine, and speculation is that Ford could opt for a version of Jaguar Land Rover's 3.0-liter V6 oil-burner used in the Range Rover. Ford would love to get the F-150 over the magic 30-miles-per-gallon marker and past Ram's light-duty 3.0-liter diesel V6 rated at 29 mpg on the highway.

Levine wouldn't speculate on a diesel truck, pointing to the company's double-down on EcoBoost powertrains. "While diesel is a solution, it is not the solution," he said. "EcoBoost offers the ideal combination of performance and fuel economy that over 60 percent of F-150 customers are choosing."

So maybe a diesel, and definitely a hybrid for the F-150. Those are big 'secrets.' But Ford has staked its truck leadership claims on more than just chart-topping sales figures that date to the Carter era. The F-150 has been an innovation leader in the segment, rolling out aluminum bodies powered by turbocharged engines, even when others scoffed. Secrets? Ford wants you to know the F-150 will get a hybrid model. If you ask us, Mark Fields was making a point. 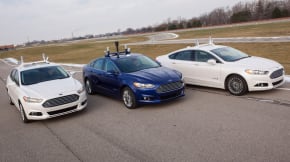 In other Ford news, California granted the company a license to test its autonomous cars on public roads. Ford joins Volkswagen, BMW, Mercedes, Google, Tesla, Honda, and other companies that have received the greenlight to test in California. Ford will begin on-road assessments next year using a Fusion hybrid. They're part of the company's Smart Mobility program, which is a 10-year strategy to advance in autonomous tech, mobility, and connectivity. To support all of this, Ford opened a new research lab in Silicon Valley in January. 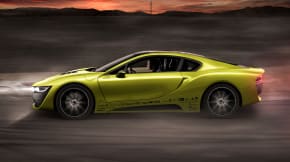 Rinspeed to reveal self-driving BMW i8 at CES

Speaking of autonomous tech, Swiss tuner Rinspeed (of all people) announced plans to reveal a self-driving version of the BMW i8 in January at the Consumer Electronics Show in Las Vegas. It's called the Etos, and it features a retractable steering wheel that somehow disappears into the dashboard. It also has two 21.5-inch high-definition widescreens, eight HD cameras to monitor the outside of the car, and a gaze tracking system that follows the driver's eye movements to aid with the autonomous features. Because it's CES, the Etos also comes with a drone. The reveal is a major departure for Rinspeed, which traditionally does one crazy concept a year, and debuts it at the Geneva Motor Show. The Etos will still be there — it's just going to Vegas first. 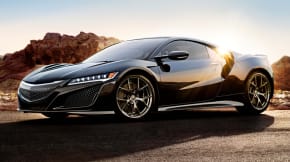 The 2017 Acura NSX will start at an eye-watering $157,800, including destination charges. Orders begin Feb. 25. The first NSX will be sold in January at the Barrett-Jackson auction in Scottsdale, AZ, and the proceeds will go to charity. A fully loaded NSX tops out at $207,500. Don't be surprised if VIN No. 1 easily tops that at Barrett-Jackson. Meanwhile, Acura is revealing something called the Precision Concept in January at the Detroit Auto Show. It will be a signpost for the brand's future styling. Acura design chief Dave Marek hinted there's more to come. "It is our intention to more strongly express performance through design, and the Acura Precision Concept will serve as the inspiration for the styling and proportion of the next-generation of Acura vehicles, especially for our sedans," he said in a statement.