Reviewing An American-Cuban Classic From The Right Seat

Seyth Miersma
If you've been following the Autoblog In Cuba series, you may remember that my efforts to rent a car in the country were ultimately unsuccessful. Misinformation, bad planning, and a lack of rental car inventory conspired to disrupt my hoped-for driving adventure.

I discovered in my week of exploration, however, that the terrific thing about Havana is that there's always another adventure to be found – if you're willing to look. A car I could drive myself might have been impossible to come by, but a ride to remember was not. After all, even when reviewing a new car, I've found that impressions about the car and the route can be credibly formed from the right seat.

Starting from the parking lot of the grand Hotel Nacional, finding an interesting car for hire is as simple as walking up and down the block. Scads of classic American iron wait just outside the hotel gates, in a riot of colors and conditions befitting the tropical climate. Fords from the 1940s are plentiful – more sedans than coupes – and the glory days of General Motors are represented by enough Pontiacs and Cadillacs to fill a Bruce Springsteen B-sides album. But the Chevy Bel Air is the king of the road here, by some margin.


I settled on a burnt orange 1957 Chevy Bel Air convertible, in tourist-appropriate condition.

I was looking for a hardtop at the request of my crew's audio/video needs, but settled on a burnt orange 1957 Chevy Bel Air convertible, in tourist-appropriate condition. This car might look good as a prop in the background on your vacation photos – hair blowing in the breeze with the ocean at your back, parked in front of Che's face in Revolution Square, etc. – but was far from pristine on a closer inspection. A perfect representative of the Cuban average. At least the price was right: $50 for two hours to make it 12 miles to Hemingway's house, and back.

My driver was a kid named Daniel who looked to be about 20 years old. The Chevy doesn't belong to him, he co-drives it with the owner, but he was able to give me the basic mechanical rundown.

The eight- or six-cylinder engine that Chevy shipped this convertible with was long gone. No surprise there, as nearly every American-made car I'd ridden in so far was powered by some belching Mercedes diesel. Despite it's clattering note, Daniel said the lump under the hood of the '57 drinks gas: a four-cylinder of Russian origins, pulled out of a GAZ Volga as best I can understand. 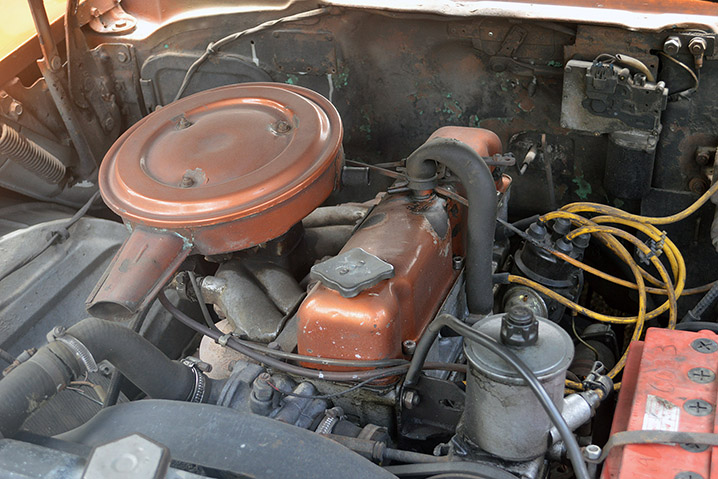 There's no way this coughing relic of a motor is still making 95 hp, more like half that number.

The vintage of engine isn't exactly clear, either, but it seems likely to be a Soviet product of the mid 1970s. That would mean in it would produce around 95 horsepower and 140 pound-feet of torque in its most optimistic tune. It had been remarked to me at many different times and in varying ways that, "the pace of things in Cuba is pretty slow." After my first few miles in the Bel Air, I was assured that it is the car to suit the country, then. In other words: there's no way this coughing relic of a motor is still making 95 hp, more like half that number.

The engine swap came complete with a transition in transmissions, too, the four-speed manual matching its engine with an unrushed, laidback feel. Daniel's arms are shorter than mine, and there are times when he extended his body far enough forward in shifting up gears that I was afraid the steering wheel would knock off his hat. Of course, not many gear changes were required on this trip. I believe we could have done the whole route in second and third if Daniel was game to slow roll a few intersections. My Spanish wasn't up to the task of suggesting pranks, so I sat back with the sun on my face and took in the half-stunning, half-tragic surroundings.

Cuban cars and Cuban roads are locked in a slow-moving, tireless battle. Automobiles displace microns of road surface with every foot traveled, joining rain, and blown dust, and shoe heels in what appears to be an uncombated erosion. In the central part of the city these conditions are mitigated by occasional maintenance, but as I rode west out of town towards our destination, contractions of paving made higher ridges and sharper edges. Whole sections of road go missing; the kind of washouts I've seen on hilly rural gravel roads, but carved into asphalt. 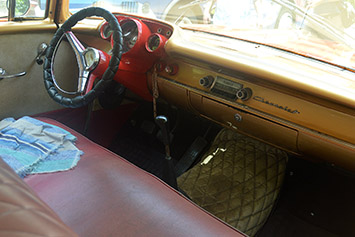 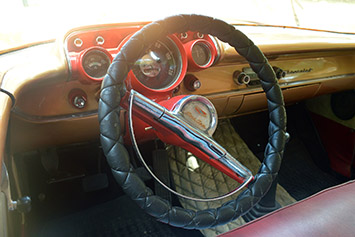 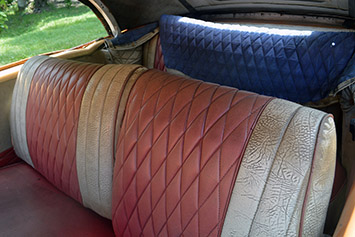 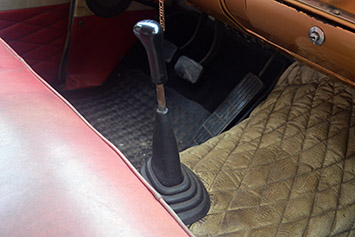 But the byways of the land exact a toll from the country's fleet of ancient vehicles, as well. The buckled surfaces and deep potholes mean hard going for shocks, springs, wheels and tires. In the case of my '57, the suspension mirrored the springs in the seats: pillowy when moving gently forward, with metal on metal evident with every major compression. The Chevy rolled and lolled fore and aft, nautically, through the Havana heat. It's as far from modern chassis response as I'm likely to find this side of a 2CV, but one becomes used to the undulations and wave-like progress in short order.

Driver skill plays a tremendous role here, too. If I'd had the chance to drive this Bel Air, cautious as I would have been, there's no way I'd have avoided every crack and crevice in the street as expertly as Daniel. He was born and raised in the area outside of Havana that we're headed to – a neighborhood called San Francisco, not to be confused with the famous plaza of the same name in Old Havana. 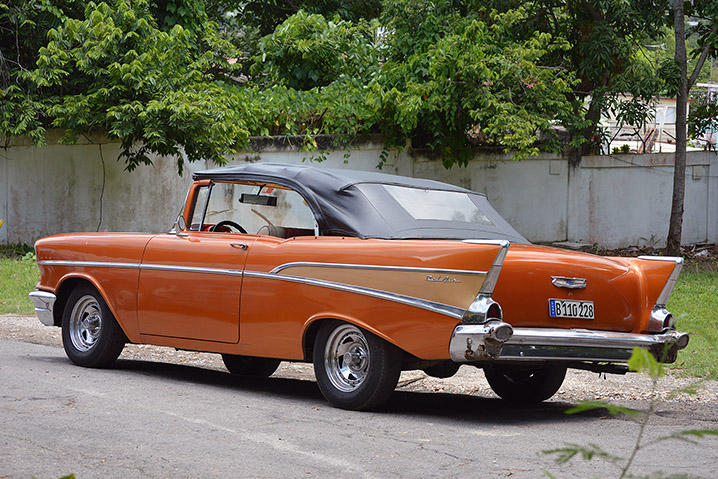 Anyone that loves old cars – old things – has been in a vehicle like this Bel Air.

When Hemingway lived out here it was the countryside, I was told. These days it seems as though nature is half through reclaiming it from the suburbs. The grounds around the great writer's manse – which he reportedly abandoned for his favorite Havana bars whenever possible – are dense with plant life. The barrio that trails in a dirty, broken-brick streak from San Francisco back downtown is so wild with growth it seems to have been abandoned in places. Through it all the Chevy picked a path like a goat or a Wrangler, with more suspension travel and body flex than seems strictly safe. Daniel drove carefully and unflinchingly over and around huge tree roots, and chickens, and random elderly pedestrians. And then we were back.

Anyone that loves old cars – old things – has been in a vehicle like the Bel Air I sampled, even if you've never been out of the country. There's a unique flavor to the Cuban classic car, to be sure: it's more handmade, weirdly modified, and with a patchwork of originality and new parts that you'll see nowhere else in the world. But, if you've every sat behind the wheel of a car that has been sitting in the sun, behind a garage or behind a barn, not moving very much for a very long time, you know what this '57 smells like. You know, before you touch it, that the gearshift knob will have been carved on the right by the thousands of hands that have held it. You know, without stepping on it, that the brake pedal will travel for a league before you find any purchase from the cranky drums. In that way, this Chevy that I wasn't allowed to drive but liked so much, blends exoticness and familiarity in equal parts. Very Cuban. And very worth the test, even from the wrong (right) seat.