When You Talk To The Fans, You Find People Who Are Loving EVs

Sebastian Blanco
It was a breezy, sunny day as the Formula E Spark Renault SRT_01E racecars buzzed their way around a downtown course in Miami. As I stood watching warm-up laps from the team paddock area, I found myself standing next to a Miami police officer. One of the few people on the grounds not because he wanted to be but because it was his job, he blithely dismissed the whirring sound the cars made as they sped by. "This is bulls**t," he said. "I miss the noise." It was a rare bit of negativity at the first Formula E race in the US.

Most of what I heard throughout the weekend as I walked the paddock, the VIP room and the fan-filled areas of the Miami ePrix were people just gushing over electric vehicles. From the high school students who were working on electric kit cars they were building and racing on the track between the real raced the Formula E School Series to the sunburnt fans squeezed together for a better glimpse of the SRT_01Es as they sped by.

The fifth in a series of 10 races in this inaugural season, the Miami race was much more than a challenge to see who would come in first place ( it was Nicolas Prost, by the way). The day was an electric vehicle extravaganza, full of plug-in promotions and people obviously jazzed to be peeking at the future, not just of racing, but the future of cars themselves. For the most part, this was a self-selecting crowd so the enthusiasm should not surprise us. But the organizers want to reach well beyond the circuit boundaries with their message that EVs are here, they're amazing and they're fast as heck. Hanging over the entire race apparatus was this idea that Formula E is on a mission, and this isn't an isolated thing. It's already being talked about for the upcoming Long Beach race. We'll come back to this idea in a minute. 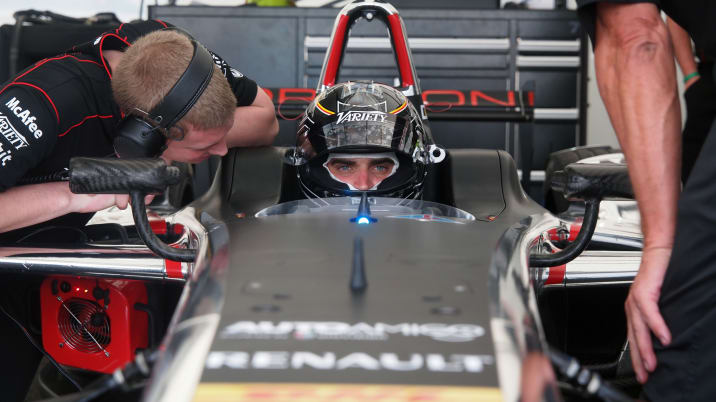 An organized intensity ruled the air in the team tents in the paddock. There are 10 teams, each with two drivers. Some teams keep the same driving duo on hand while others swap them in and out with abandon. And then there are the engineers and managers. Everyone had a purpose : double-check this list, test that item, sign off on the whole shebang. Once the cars were ready (two in each tent), the drivers were able to roll out for their practice runs. After an hour of this, it was time for the qualifying runs. Unfortunately, I was not given a media pass and, for reasons I won't get in to here, I was not able to procure one on the day of the race, so my presence in the paddock while the cars were on the track made the security guards supremely unhappy. The begrudgingly let me hang around for a while, but only because it wasn't safe at that moment to cross the track. When it was, I headed back to the VIP tent and then the main area.

The VIP area was called eMotion, which is clever enough. Inside, too many attractive young people wandered around serving food and drink. Champagne flowed easily in the hot afternoon sun. If you didn't want to stand outside and watch the cars roar by, there were numerous TVs set up in air-conditioned spaces where you could see the nearby action in HD, with live commentary.

The Miami race was 39 laps around a 1.34-mile, eight-turn circuit. That's slightly shorter than the official rules allow (they say that every circuit in the series is between 1.55 and 1.86 miles long) but no one seemed to care. Miami was also the first circuit without a chicane. Since the cars won't have enough power from their 28-kWh battery from Williams Advanced Engineering to last for the entire race, there is a mandated pit stop around halfway through where the drivers change vehicles. That means there are 40 cars present at a race: 10 teams, two drivers each with two cars for each driver. The motor comes from the McLaren P1 and Formula E calls it "the most powerful available in any road car and [it] has been adapted to cope with the demands of Formula E racing. The electricity the cars use comes from a generator that burns a pollution-free, non-toxic glycerine. 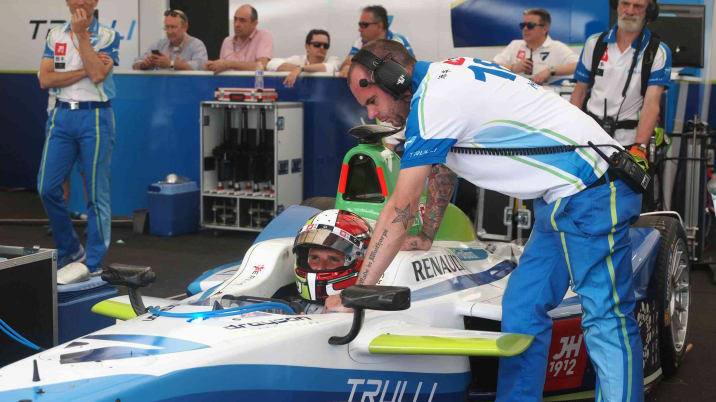 Scoring is the same as in Formula One, with the winner snagging 25 points, second place 18 and then on down the line to 10th place (one point). Drivers can also score for reaching the pole position (three points) and achieving the fastest lap (two). The twisty corners of the downtown race don't have any massively long straightaways so the cars barely have the chance to get all the way up to their 139-mile-per-hour top speed. It's not that they don't have the guts, with a 0-62 mph time of 2.9 seconds, it's just that there are some serious limits in place this year.

Those limits extend beyond the short tracks (which do make for an exciting view from the grandstand, with the pack darting by every 20 or 30 seconds, it felt like). The main limit is that all of the teams are driving the exact same cars this year (livery excepted). To keep things simple for the first season, the organizers forbid any changes to the vehicles. Next year, though, the teams will be able to modify the motor and transmission, with the battery becoming fair game in year three.

Since the cars are the same, winning is truly the result of driver skill – with one caveat. Driver engagement with fans is not only a way for the teams to get publicity but an actual in-race benefit, thanks to Fan Boost. Think of Fan Boost like the real-world version of turning into that bullet character in Mario Kart. Whichever driver gets the most fan votes before the race starts will be able to "cheat" twice during the race. Each of his or her cars will be able to override the 200 horsepower limit for five seconds, reaching 240 hp whenever the driver is poised to pass, except during the first lap. 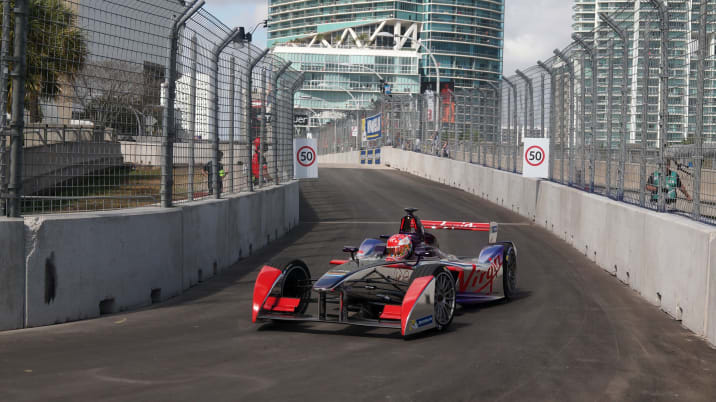 That's how things go down on the track, but when there was no action there, the organizers kept the VIP entertainment going, letting the electric motorcycle riders show off inside and blaze up and down the stairway for some stunt action, for example, while the attractive young people held hands and blocked us from crossing the walkway. It was fun and all, but the riders caught way more air at the outside half-pipe that anyone with a ticket to the race could watch, and overall, it was in the eVillage that the real competition of the Formula E event took place.

Formula E has been worked on since at least 2011. Right from the start, the idea was that the races were going to educate people about electric cars even as the drivers tried to maneuver their way to be the first to cross the finish line.

What's nice about a Formula E race compared to a Formula One or NASCAR event is that, while you certainly hear the cars approaching, it's easy to have a conversation as they zip by. The rules say the cars will emit a sound that's around 80 decibels, but in person, the important thing is that you don't ever have to wince or plug your ears at a Formula E event. That's why it was relatively easy to walk around the eVillage and talk to fans, which seemed like an important component to the whole story. Was the educational mission a success? My brother and I walked around with video cameras and got people to share their impressions (well, except the guy who said he couldn't be on film because he wasn't supposed to be there) and the TL:DR answer is "yes."

Here's what they had to say:

Message delivered, right? Of course, there were some who didn't care about the EV-ness at all and if you looked at it just right, being at Formula E felt a lot like any other major sporting event, with overpriced programs (which were, of course, handed out for free in the VIP area) and scalpers out front offering to sell and buy tickets. In the program, Florida Governor Rick Scott, who has recently come under fire for telling his subordinates to not use the term "climate change" in official business wrote a welcome letter that was completely void of any mention of sustainability or an environmental impact of any kind. Instead, his words had the tried-and-true sound of a form letter. "As a lifelong entrepreneur," he wrote, "I understand what it takes to grow a business. That is why we are working to cut taxes, eliminate burdensome regulation and make record investments in education so that families can job creators can prosper in our state." The letter from the mayor of Miami-Dade county, Carlos Giminez, was more on point: "[Formula E] represents a vision for the motor industry and promotes a message of sustainability."

In the end, I came away with two main thoughts about Formula E. They're not contradictory, but they might seem like they don't fit together. The first is that electric vehicles are here to stay. Whether in racing or for everyday transportation, we're all going to be plugging in more and more cars. They're new and exciting right now, but they're going to become unavoidable. And that's thought number two, which is that major companies are spending millions of dollars to make electric racing feel in a lot of ways like any other motorsport event. The infrastructure, the corporate presences, the celebrity sightings (Sir Richard Branson was there to hand out the trophies). It all felt so normal. And that's no bull.