Second Verse, Better Than The First

View All Specs
5 Reviews
The original Hyundai Genesis was something of a mixed bag. A great first effort, no doubt, but as with any, well, genesis, there were weak points – the infotainment system and some interior materials, for example. In creating its second-generation model, Hyundai paid plenty of attention to these shortcomings while wisely deciding to retain the most notable of the original model's strengths: its 5.0-liter V8.

The 420-horsepower rocket from the former Genesis R-Spec has once again been named the top-flight engine for this updated, 2015 model. Hyundai has comprehensively overhauled its first rear-wheel drive sedan, and while it might use an older – but impressive – engine, the 5.0-liter V8 isn't nearly as big of a story this time around. That's because it's now wrapped inside a far better package, as we found during a week behind the wheel.

Hyundai's stylists have matured the Genny, opting for significantly more standout sheet metal in this new iteration. The old car featured a more traditional three-box shape, while the second-gen car is more open about its rear-drive layout, featuring a long hood and a short rear deck that feeds right into an aggressively raked rear window. The upright front fascia, with its broad, crisply styled grille and almond-shaped headlamps is clean and fashionable while still coming off as sort of conservative. Around back, Hyundai maintained some semblance of its old fluidic design, with sweeping, wraparound taillamps, while the V8 model's bumper is home to sporty, staggered quad exhausts. 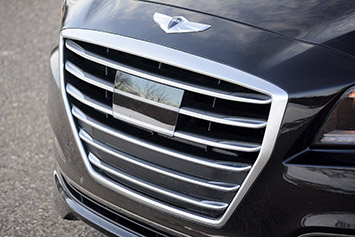 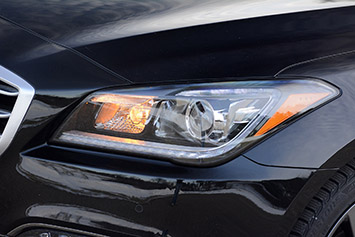 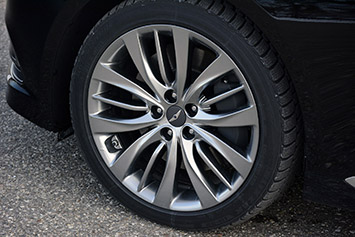 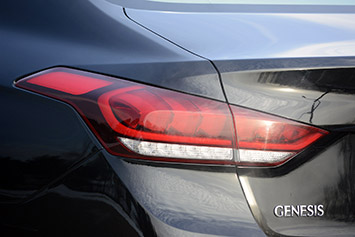 That said, the updates to the exterior are overshadowed by the comprehensive overhaul found in the cabin. The Genesis finally has an interior befitting of its price tag, thanks in large part to the swath of natural-looking matte wood trim on the dash, complemented by aluminum accents. The upper and lower dashes are finished in plastic, but its quality is no better or worse than what you'd find in a German competitor. However, while the cabin certainly feels much better than the last-gen model, there are still a few shortcomings.

The "ultra premium" leather is standard on the 5.0's wide, supportive seats, and while it feels very, very nice, we did notice that even with fewer than 8,000 miles on the clock, a regular parade of denim-clad auto journalists has already started to stain the driver's side bottom cushion – something we noted during our year-long test of Hyundai's larger Equus. On top of that, Hyundai didn't bother to fit this nicer leather on the Genny's steering wheel, opting for a material that feels more suitable for a bargain-minded vehicle. 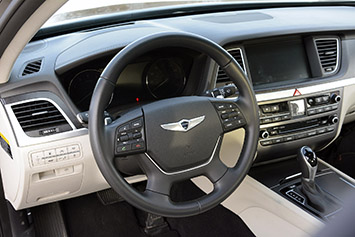 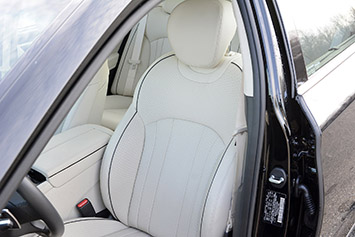 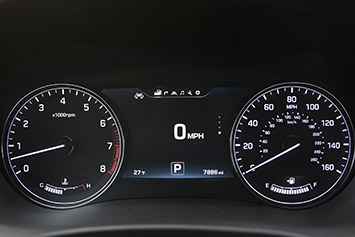 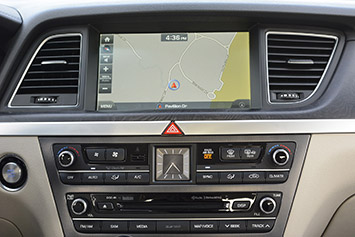 Ignore those two quibbles, though, and the interior is a nice place for its driver. After a week of driving, we're happy to report the standard 16-way driver's seat would prove comfy on even the longest of hauls. Visibility, meanwhile, is quite good throughout, thanks largely to the car's relatively low beltline.

Our tester's sole option was the $3,250 Ultimate Package, which adds continuous damping control, an excellent head-up display (which we detail in the video below), a giant 9.2-inch touchscreen navigation system, a 17-speaker Lexicon stereo and a power trunk lid. That's in addition to the 5.0's impressive list of standard equipment, which includes a panoramic sunroof, heated/vented front seats, HID headlights, adaptive cruise control, all the latest and greatest safety features (blind-spot monitoring with cross-traffic alert, lane departure warning, lane keeping assist and emergency braking), and that handsome matte wood trim.

Going into this review, we were already fans of Hyundai's 5.0-liter, 420-horsepower V8 and its attached eight-speed automatic. Along with 383 pound-feet of torque and a sonorous 6,500-rpm redline, we found this engine to once again be quite entertaining. It really desired to be wound out, and sounded pretty darn good in the process, relative to the turbocharged wooshiness of its German competitors. But with peak torque arriving at 5,000 rpm, we needed to dip further into the throttle than those same Teutonic mills, which enjoy broad, low torque peaks that make getting up and going a relatively carefree affair.

The Genesis' throttle never quite felt sharp enough, either. It was a strange contrast – such a revvy engine having such a sluggish throttle response. But it wasn't terribly unpleasant. If anything, it served as a reminder that while the V8-powered Genesis is indeed a quick car, it's not a sports sedan.

The eight-speed automatic fired off rapid upshifts, both in automatic and manual modes, though it did spend a bit of time hunting on downshifts. This was less of an issue when we used the paddle shifters, however. They didn't have a particularly crisp action, we found them to be a bit on the small side, but those were overlooked easily enough – what's important is that they added to the overall enjoyment of running the 5.0-liter V8 hard. 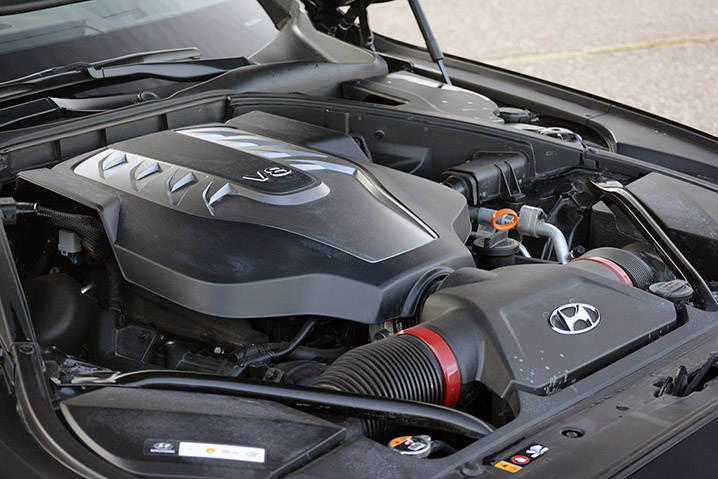 While the powertrain felt rather bipolar in its character, the ride and handling of the new Genesis were far more single-minded. Even with the trimmings of a performance sedan – 19-inch wheels, a fully independent suspension tuned by Lotus and continuously controlled dampers – this Genny felt happier on the straights than through the bends.

The body motions were plentiful, with more roll, squat and dive than we'd ever encountered in a BMW 5 Series, Mercedes-Benz E-Class, Cadillac CTS or Audi A6. That's not to say the Genesis lacked composure, though. Throwing the four-door into a bend, roll built progressively. Digging into the throttle, the rear suspension loads appropriately. More than that, though, the suspension felt composed through the turns. You certainly won't be carving corners in this Hyundai, but you won't find it a wallowing mess, either.

Of course, as the most challenging corner most Genesis owners will approach is their local on-ramp or roundabout (and they'll probably never, ever turn off the stability control), they're unlikely to worry about such precision. Instead, they'll be far more interested in the way the big Hyundai handles everyday situations. Despite the soft suspension, the inclusion of continuously controlled dampers means that even on rough and ragged roads, the ride felt quite planted and controlled. The car didn't porpoise about, instead gliding down the road, managing bumps and imperfections with aplomb. Even bigger impacts were quite well isolated, while tire roar, even with our tester's big 245/40/19 Bridgestone Blizzak winter tires, was nicely managed. 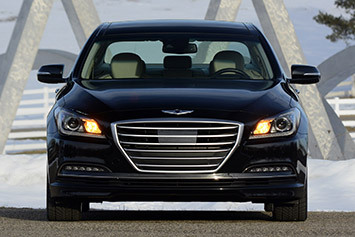 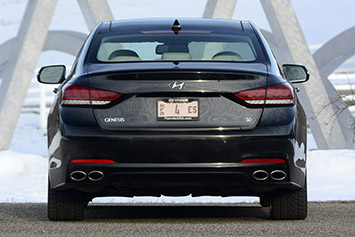 The first-generation Genesis got by with an electro-hydraulic power steering system that we found accurate and responsive in our last review. The new all-electric unit in the latest Genesis managed a similar feat during our test week, offering up a light profile that built linearly as the steering angle increased. It was a bit numb on center, but there was a reasonable level of feedback as weight piled on. All told, as electric units go, Hyundai has a sound one on the 2015 Genesis.

Generally, we'd discuss our tester's fuel economy at this point. But seeing as how we spent most of the time enjoying the 5.0-liter V8 and/or sliding about in the snow, the meager figures we returned hardly seem worth discussing in depth. Suffice it to say, with 15 miles per gallon in the city and 23 mpg on the highway, Genesis owners interested in fuel economy will be far better served by either the rear- or all-wheel-drive V6 model. 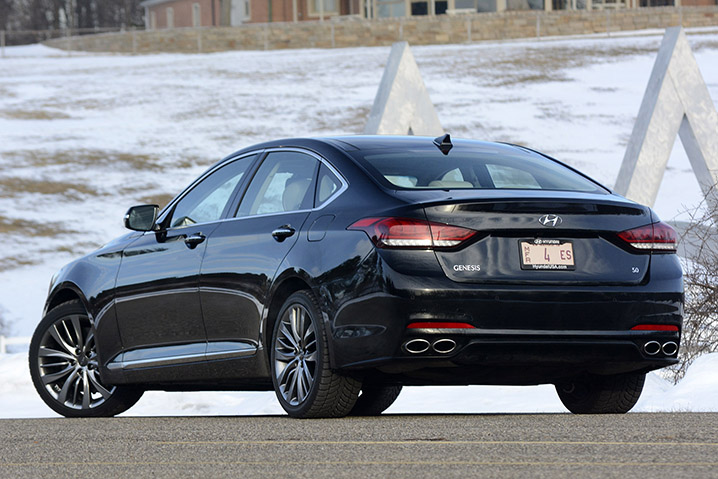 Doing so, of course, will save you more than just money at the pump. While the Genesis range starts at just $38,000 (not including a $950 destination charge), adding the 5.0-liter V8 immediately elevates the price to $51,000. From there, your decisions are quite simple – pick from one of the four interior color schemes and ten exterior paints, then figure out whether you want to spend another $3,250 on the Ultimate Package (hint: you do). Out the door price for a Genesis identical to the one you see above: $55,700.

That is an extremely favorable price, relative to the Genesis' two closest competitors in terms of power output. A BMW 550i starts $64,900, and a Cadillac XTS Vsport rings up at $63,730. In other words, you're going to be spending quite a lot more money for decidedly more performance in the competition, but a lot less equipment. You simply can't get anything from BMW or Audi that can even approach the Genny's equipment level without settling for a 2.0-liter, turbocharged four-cylinder.

The big takeaway here is – like we said at the beginning – that the latest, second-generation Genesis is an excellent offering. Even if you take the V8 out of the equation – and you can, the V6 is darn good, too – nearly everything we took issue with in the first-gen car has been addressed for 2015. It's a remarkably complete and competent package, and one you certainly shouldn't overlook. 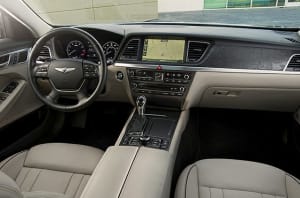