View All Specs
5 Reviews
Korean Luxury Gets A Little Sharper

Hyundai isn't interested in knocking shields with the likes of the BMW M guard, the Audi S line or even the Mercedes-Benz AMG legion with its 2012 Genesis 5.0 R-Spec. Instead, the newest addition to the Genesis line is out to offer buyers an extra helping of power and slightly sharper dynamics without all the motorsports pretense of its haughty German rivals. With 23 straight months of sales increases and 29,122 units sold last year, there doesn't seem to be much of an argument for varying the luxury sedan's recipe.

Even so, Hyundai has been quick to update its mid-luxury creation. Despite having arrived in 2008 as a 2009 model, the Genesis received a mild refresh in 2010, and 2012 brings a range of improvements across the line. Those include more power and fuel efficiency for the entry-level 3.8-liter V6 engine, aesthetic tweaks and the arrival of this range-topping Genesis 5.0 R-Spec. We were able to spend some time behind the wheel of the new five-liter four-door just outside of Las Vegas, but is the new bruiser worth its $47,350 price tag?

Outside, the entire 2012 Genesis line wears a few subtle aesthetic updates. The redesigned front fascia is trimmed in reworked chrome accents at the corners and a new grille is flanked on either side by headlights with LED daytime running lights. Down the vehicle's side, revised rocker panels and new matte chrome window trim are joined by redesigned 17-inch wheels. Toward the rear, new tail lamps and a slightly revamped rear fascia with integrated exhaust outlets tie up the changes. Meanwhile, 5.0 R-Spec trim adds in larger 19-inch wheels, dark-trimmed headlights and special badging.

Indoors, Hyundai is offering buyers a new rash of interior colors and trims, but the cabin has otherwise been left untouched. Rear passengers can now enjoy heated seats while the driver is met with a new lane departure warning system and glare-resistant TFT LCD screen mounted in the center of the gauge cluster. Check out the display in the Short Cut below.


When it comes to the 5.0-liter R-Spec, we would have liked a little more differentiation applied to the sedan's cabin. In fact, a set of embroidered floor mats are the only indicator that you're commanding anything other than a 3.8-liter model. Whereas competitors are happy to slather their go-fast monograms over unique steering wheels, high-bolstered seats and premium shift knobs, Hyundai has opted to make use of the same kit as the base vehicle.

While the Korean manufacturer implemented conservative updates to the sedan's cabin and exterior, the automaker's engineers were given free rein when it came time to pop the hood. The car's base 3.8-liter V6 now packs a galloping 43 more horsepower than the outgoing six-cylinder thanks to the addition of a direct-injection system. In fact, the company says that the engine is all-new from the cylinder heads up thanks to the addition of dual continuously variable valve timing, a variable intake system and what Hyundai calls a maintenance-free timing chain. All told, the 3.8-liter GDI V6 is good for 333 horsepower at 6,400 rpm and 291 pound-feet of torque at 5,100 rpm, up from 290 horsepower and 264 lb-ft of torque in the last-generation. Even with all that additional grunt on hand, fuel economy has increased to 19 mpg city and 29 mpg highway – a jump of one mpg city and two mpg highway over the 2011 Genesis 3.8.

Interestingly enough, the old 4.6-liter V8 is still on the option sheet for 2012, though the engine remains unchanged for the new model year.

Meanwhile, the biggest news in the engine bay comes from the arrival of a new 5.0-liter direct-injection V8 based on the same architecture as the old 4.6-liter lump. Hyundai has brought all of the lessons learned from engineering the company's turbocharged 2.0-liter four-cylinder engine to bear on the larger-displacement eight-cylinder to both increase power and deliver decent fuel economy. The cylinder sleeves now wear the same counter-spiny liner as the forced-induction four-cylinder for more efficient cooling, and the company's engineers implemented chromium-coated piston rings to decrease internal friction losses. A lightweight clamshell exhaust manifold, tuned intake system and dual continuously variable valve timing all help bump the final power numbers up to 429 horsepower at 6,400 rpm and 376 lb-ft of torque at 5,000 rpm. Despite the increase in grunt, fuel economy sits at 16 mpg city and 25 mpg highway.

For reference, the old 4.6-liter V8 churns out 385 horsepower and 333 lb-feet of torque while netting just one mpg better than the new 5.0-liter in both city and highway driving.

Hyundai chose to pair each of its engines with the company's new in-house eight-speed automatic transmission. The gearbox rocks over 130 patents and features a wide gear span with skip-shift capability and direct-control solenoid valves for smoother shifts. By designing and building the transmission itself, Hyundai was able to implement a few weight-saving measures as well, including the use of an aluminum carrier and a plastic oil pan with an integrated filter.

Suspension-wise, the base 3.8-liter Genesis and the mid-range 4.6-liter Genesis still ride on the same mechanicals as last year, though the 5.0-liter R-Spec has received a number of updates designed to give the vehicle more sporting characteristics. A lightweight, hollow 19 mm rear stabilizer bar works in conjunction with higher front and rear spring rates for what Hyundai hopes is a more planted feel once the tarmac goes twisty. In addition, Sachs ASD shocks serve up 25-30 percent higher damping rates to help keep everything under control, and optional Bridgestone Potenza S-04 summer tires serve up extra grip in warmer months.

The combined effect isn't so much the difference between an M5 and a 550i as it is the shift from 535i to 550i. During our brief stint behind the wheel, we were only made aware of the stiffer suspension when the road turned rough, though the stickier Bridgestone rubber made a noticeable difference in the amount of available grip in mid-to-high speed cornering. The Genesis 5.0-liter R-Spec feels more confident than its 4.6-liter and 3.8-liter counterparts, but only in situations that most Hyundai buyers will never find themselves in. Otherwise, the suspension merely comes across as needlessly harsh.

What's more, the R-Spec uses the same steering rack and brakes as its more plebian siblings, so don't expect any miracles at the turn-in or stopping. And what of the new horsepower? Hyundai claims the R-Spec can click off a 60 mph run from a dead stop in 5.1 seconds, which should tell you all you need to know about how the vehicle accelerates. The strange thing is that the big sedan doesn't feel that fast. You know you're gaining speed because the speedometer scoots skyward with only the slightest provocation, but there's no throaty exhaust note to announce your intention. With 429 horsepower on tap, we want the sound of a chorus of aching angels to mourn our wayward ways every time our right foot finds the carpet.

After a couple of hours with the big-horsepower Genesis, we were left a little mixed on the sedan. Yes, it's powerful, and yes, it delivers decent fuel economy, but the vehicle lacked any sense of occasion. We were never under the impression that we were driving anything other than a slightly more potent version of the base sedan, and that's a problem. While the 2012 Hyundai Genesis equipped with the direct-injection V6 engine is an absolute steal at $34,200 plus an $850 freight charge, the automaker politely asks for $46,500 plus the same freight fee for the privilege of calling the 5.0 R-Spec your own.

That's still a far cry cheaper than competitors like the Infiniti M56 at $59,995 (including destination), the BMW 550i at $61,075 or even the Lexus GS460 at $56,245. In fact, there are few vehicles out there that can compete with the R-Spec on price and content. Just don't expect world-class performance or panache.

In the automotive alphabet, the letter "R" has always stood for performance. By branding the company's new top-of-the-line Genesis with the sports-oriented letter, Hyundai may have set buyers up for disappointment. While the R-Spec is an impressive vehicle in its own right, the four-door is far from a legitimate sports sedan. As a faster alternative to the 4.6-liter V8 vehicle, the 5.0 R-Spec shines as brightly as the company's engineers and designers could have hoped.

Unfortunately, with 43 more horsepower than the outgoing V6 and improved fuel economy, the base 3.8-liter Genesis is more appealing than ever. With a snappier final drive ratio than its V8 brethren, the V6 even feels pretty quick off the line, making the extra coin for the 5.0 R-Spec even more difficult to justify. If you're signing on the dotted line for a Genesis, stick with the base model and use some of the cash you saved to pick up a set of the Bridgestone rubber available on the big R for a little more grip. You'll be happier in the long run. 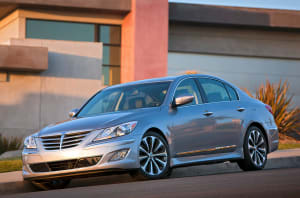