We ride the Harley-Davidson Livewire into the sunset

And Ask What It All Even Means I've never been a big fan of Harley-Davidson. This, despite the fact that my earliest motorcycle memory is being wedged between the gas tank of a Milwaukee-manufactured machine and a wild uncle, then going for a breathtaking ride up a shaded mountain holler on one of those perfect childhood summer days.

When the adolescent version of myself spent hours thumbing through tired stacks of Iron Horse, Outlaw Biker and Easyriders belonging to another uncle, it certainly wasn't the sight of customized Sportsters or chromed-out choppers that kept me crossed-legged on the carpet for hours. It was the sinfully half-clad ladies posed with the bikes that held my interest then. If I'd had the cash to buy a motorcycle, it probably would have been a Yamaha or Honda.

To my mind, the Japanese had the right approach. My daydreams saw me bent forward, eyes peeping over the handlebars of a CB 550 Super Sport, slipping through potato-potato packs of bearded bikers before they even suspected their highway-hogging authority was being challenged. A couple of twists in the road and there would be no catching up with the Honda. Light, nimble and quick seemed to me far superior to those rumbling, oil-leaking, anachronistic caricatures mired in the technology of decades past.

The Motor Company has slowly made progress over the past thirty-or-so years, putting distance between itself and a reputation for mechanical mediocrity earned in the '70s when it was owned by American Machine and Foundry (AMF). Sure, it still mostly makes large, heavy bikes powered by air-cooled V-twins, but liquid-cooling and other advancements have crept into its range, and last year saw it unveil the Street in uncharacteristically-small 500 and 750 cc flavors. Still, none of this was enough to change my opinion of the brand. 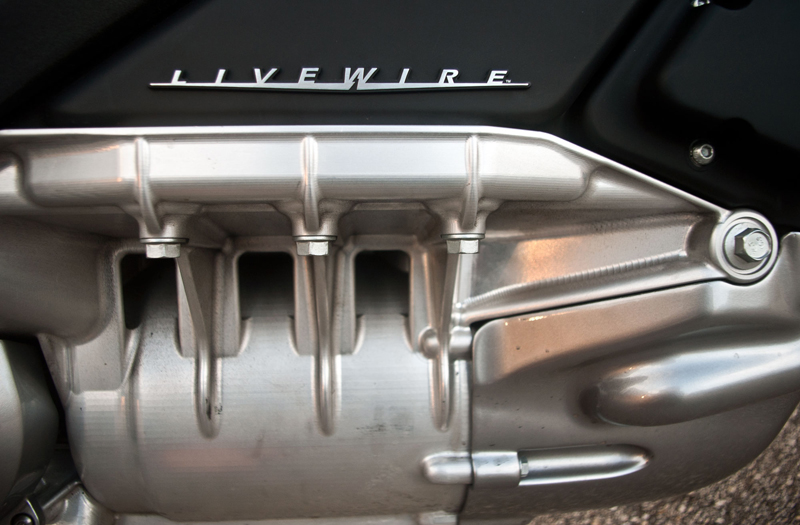 But then, this summer past, Harley went public with Project Livewire – a foray into electric vehicle technology centered around a compact, sporty roadster equipped with a 55-kW (74-horsepower) AC motor linked to a single-speed gearbox. This was as unexpected as wasabi-flavored chocolate. It was like being grabbed by the lapels and told, nose-to-nose and in no uncertain terms, to pay close attention to this company, its plans and products. You could almost smell the halitosis.

Armed with the #projectlivewire social media tracking tool, a vast campaign kicked off, bringing a fleet of bikes to dealerships around the US, and featuring a separate tour of Route 66 by H-D executives. Each of the 30-plus stops was anchored by local media appearances on TV, radio and in print, pushing a message of reinvention using electric guitar analogies and tinged with talk of sustainability.

With an atmosphere not unlike a small circus, the events offered both brand-faithful road warriors and the Harley-agnostic curious the chance to go for 15-minute chaperoned spin and get a taste of this battery-powered surprise. For the motorcycle unlicensed, a fully functional bike was set up on a stand in front of a wall of screens displaying oscillating sine waves for a simulated experience. There were Livewire hats and t-shirts available, and helmets with heads-up displays and LED-adorned jackets were also on exhibit for consideration and feedback, though not for sale. 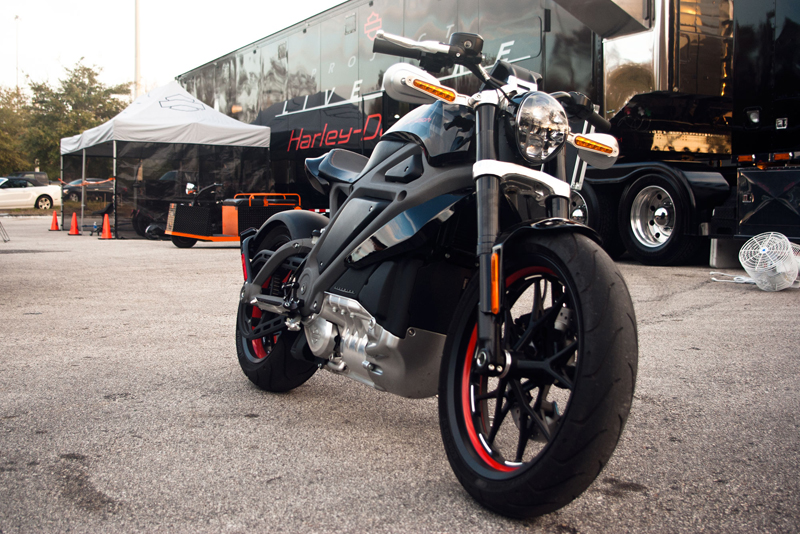 I arrived at Adamec Harley-Davidson of Baymeadows just outside Jacksonville, Florida, for my own "#projectlivewire experience" on the last day of the last US tour stop. Just to underscore the kind of interest the concept of an electric Harley-Davidson has provoked, my not-especially-motorcycle-inquisitive sister was easily persuaded to drive me the two-and-a-half hours to the event. (Thanks, Sis!) After watching a short video about the bike and what to expect, signing some waivers and borrowing a black branded full-face helmet, I was ready to ride out with the second-last group.

At this point, practically everyone even remotely associated with the two-wheeled press has had their turn on this bike. Autoblog has previously featured our own ride during the initial rollout, its lengthy appearance in Jay Leno's Garage and, more recently, our Translogic brethren have given it a go. I, however, have my own special set of qualifications with which to evaluate this machine. Or lack thereof, as the case may be. The fact is, although I'm more than a little electric-motorcycle obsessed, I've only previously ridden on the street one time. Yup, I'm pretty much a total neophyte.

But if Harley-Davidson wants to continue to grow its market with an electric offering, I'm the kind of person it needs to attract – or maybe a slightly younger, and possibly more ethnically-diverse, version of me. And the bike to woo me and my fellow newbies must be approachable, manageable, yet compelling. Shortly after throwing a leg easily over the Livewire at the back of the pack and taking a seat while getting a little more ride-specific instruction from an enthusiastic dealership employee, I realized the bike had passed the first test. 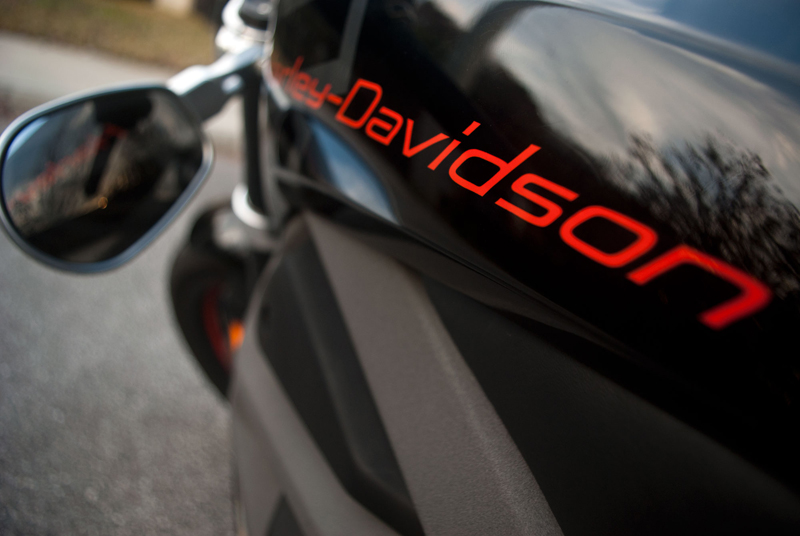 With hands the gripping the flat, low handlebars and feet well-planted on the ground, this thing feels great just sitting in place. There's a bit of forward lean, lending a sense of anticipation, enhanced by the quiet sound of my breath inside the helmet. Switched on and power mode selected, we roll out. Crawling across the parking lot wobble-free, the low-speed stability is comforting. Second test passed.

Sticking to surface streets with a 45 mile-per-hour limit, there is no opportunity for my squad to even remotely approach the 92 mph top speed of our electric mounts. However, by slowing down and putting space between myself and my fellow experiencers, I do manage try out its lower-end acceleration capabilities. Though a little short of the religious experience of the Zero SR, the pull from casually loitering to outlaw territory is sweetly satisfying. The power just wells up, and as your right wrist turns down, the corners of your mouth turn up. I briefly consider taking a hard left and giving our minders the slip.

Rolling off the throttle leads to another revelation: the regenerative braking on this limited run of prototypes is cranked way up. They had mentioned this in the pre-ride spiel, but it was still surprising. It's almost like throwing out an anchor. I like the concept of regen, as it can mimic the engine braking of an internal combustion motor while returning a few electrons to the tank, but here it could use some further fine tuning to feather the way it engages. 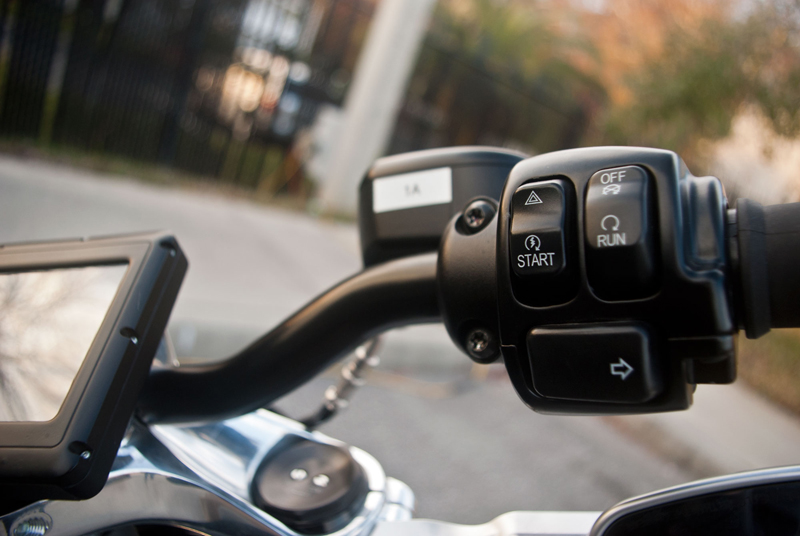 After repeating the low-speed parking lot parade, we are back at our starting point, and as I sit waiting while each rider gets their picture taken, I am thankful. I didn't embarrass myself by crashing – something that a rider had done a day earlier, thankfully with no physical injuries – and I managed to successfully deploy my turn signals, aided by a great self-cancelling setup that has each turn indicator mounted on its respective side of the handlebars. A small thing to some, perhaps, but an implementation I truly appreciated.

Mostly, though, I'm glad I even got the chance to ride the Livewire. With all the speculation about the company's future intentions, it was helpful to actually ride this first prototype and become more personally acquainted with the brand. The short journey through the streets of Jacksonville easily told me more than any public relations executive could have, which is good, since they'd all left by the time I arrived.

Though I can't definitively answer the one question everyone has about Harley-Davidson and electric motorcycles – will they offer one to customers? – there are a number of factors I can enumerate that lead me to believe they will. Not in 2015, of course. This calender year is devoted to taking Project Livewire to Canada and Europe. But perhaps sometime not long thereafter. Maybe 2017. 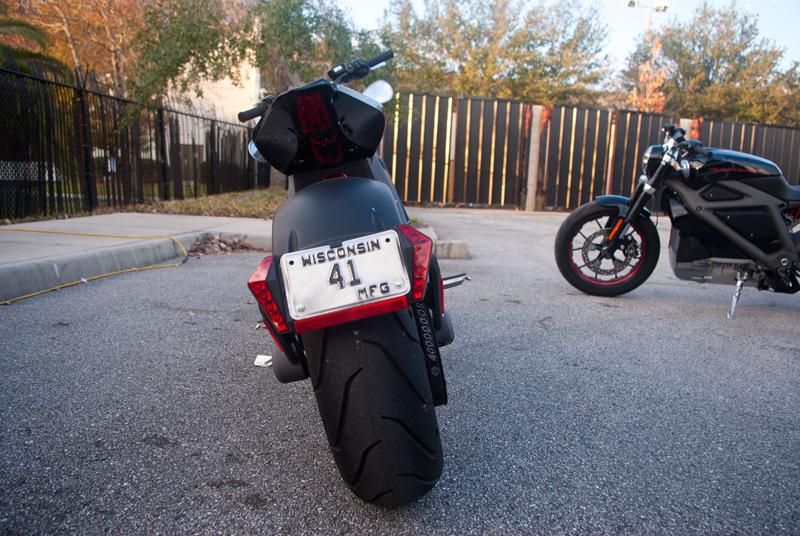 The first thing I would point to is the timing of the origin of this undertaking. The first rumor of Harley's electric dabblings emerged in early 2011, which puts the genesis of Project Livewire in the rocky period of the global economic downturn. HOG stock fell as low as $7.99 a share in early 2009 from its historic high of $74.93 in 2006, and the company undertook drastic measures, including the cessation of the Buell brand and a massive restructuring of its operations. Not long thereafter it decided to spend millions on this effort. It's hard to believe they would commit to this amount of expenditure for a program they weren't serious about.

Another sign of sincerity can be found on the careers portion of the company's website. There, you'll find listings for several electric vehicle manufacturing jobs, including an advanced project engineer for electrical manufacturing position and a staff technical engineer - electrical vehicle (EV) job post. If it wants to build electric motorcycles in numbers, it won't farm out the drivetrain production to Mission Motors as it did with this first crop of bikes, and so appears to be taking steps towards bringing that activity in-house.

Finally, while Harley-Davidson will proudly inform you that it has been the "number one seller of new on-road motorcycles in the US to young adults 18-34, women, African-Americans and Hispanics" for the past six years, it's no secret that the average buyer are white males pushing fifty. The company realizes it needs to broaden its owner demographics if it's to see continued growth. By expanding into machines that feature touch screens and offer the possibility of smart phone compatibility and user configuration, Harley is speaking the language of milllennials and the tech savvy.

Of course, electric motorcycles are still a niche of a niche in the market place and won't be responsible for any manufacturer's dramatic sales boom any time soon, regardless of demographic. Still, having a hand in what's widely seen as the technology of tomorrow gives the company an entrée to a younger, dare I say, "hipper" crowd and pulls open wide the door of the Harley tent. 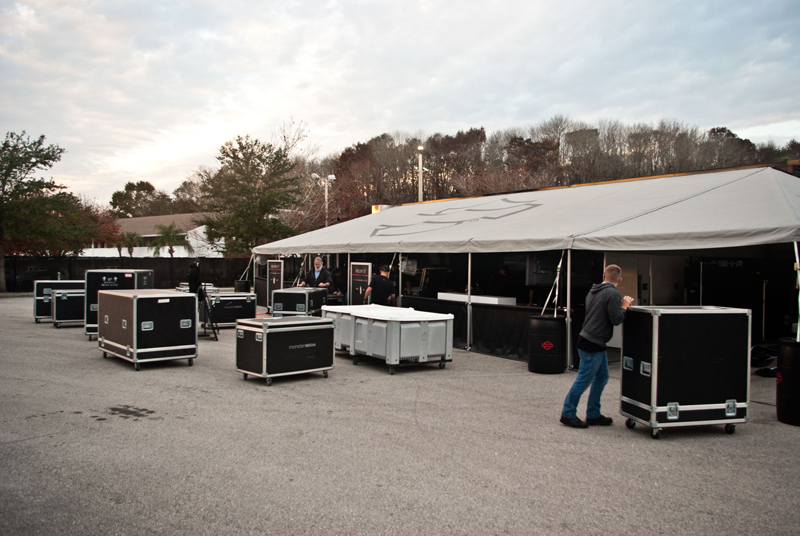 Within minutes of the last group pulling up into the dealership's back lot, the Livewire installation begins to come down for the last time on American shores. The crew is well practiced, and much of the display is packed into large rolling road cases by the time I've asked a few final questions of one of the Project managers and taken the photographs you see here.

By seemingly all accounts, this massive exercise has been, so far, successful. The bikes have held up perfectly, the rider feedback has been quite enthusiastic and Harley-Davidson has gotten a ton of positive press from the effort. It's turned heads, opened minds and, no doubt, increased the value of the company's intangible assets.

Indeed, the time spent with Project Livewire has altered my own opinion. During my lifetime, I have never worn a Bar and Shield-branded t-shirt. Not even ironically. But, if Harley eventually brings a bike to market that fulfills the promise of this battery-powered beast, I just might have to reconsider. I've been converted from a non-fan to a potential customer.