Testing For The Future By Breaking With The Past

Days before Harley-Davidson shocked the world with news that after 111 years of building increasingly larger, gas-powered V-twins, it was going all Tesla with its plug-in electric LiveWire, I had the chance to ride it.

The country's largest and most iconic motorcycle maker had set up shop on a remote strip of SoCal asphalt, a pair of top-secret LiveWires at the ready. The trailer that had carried them was unmarked, and with the exception of two Harley employees, no one was around to notice that the motorcycle silently blazing down the runway was from Milwaukee's finest. If it weren't for the black-and-orange color scheme or bar-and-shield badge, the LiveWIre's provenance would be a wild guess. It's just that different from the cruisers Harley has cranked out for decades.

Gone is the laid-back riding position, along with the bigger-is-better profile and long-haul-touring floorboards. In their place: a compact machine with an aggressive, forward-leaning stance and sporty centered foot pegs. Even the trellis frame is more Ducati than hog, hiding, as it does, a stack of lithium ion batteries instead of proudly showcasing a hulking, 103-cubic-inch V-twin. There is no gas tank. No exhaust. Just a bobbed tail suspended on a monoshock above a rear tire driven with a belt instead of a chain.

The LiveWire ignition is keyless and, like most Harleys, works in combination with a fob, but that's where the similarities end. Turning it on is a matter of flipping a switch on the right grip – an act that isn't greeted with the nearly trademarked, and now electronically programmed, potato-potato-potato exhaust note. Instead, there is a low-grade hum as an oil pump kicks in to cool the 74-horsepower electric motor bolted to its belly and a second pump that cools its ECU. 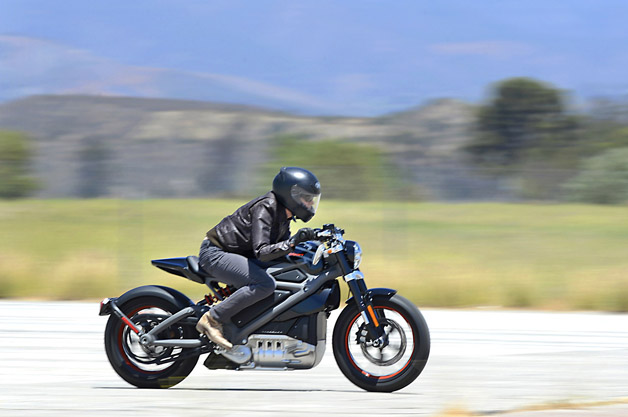 Before I could take off, I was prompted to make a decision: Power or Range? On a full charge, Power allows about 30 miles of riding with an unbridled 52 pound-feet of torque. Range mode Novocaines the throttle response but nearly doubles the distance.


Before I could take off, I was prompted to make a decision: Power or Range?

I made the only logical choice. I touched my gloved finger to the screen to select Power. The throttle was live.

While its useable range is an issue, Harley got a lot of things right with its LiveWire, including its name. Twisting the grip nearly jolted me from the saddle with acceleration similar to that of a Ferrari. While the torque rating of the LiveWire is about half of a gas-powered 2014 Harley tourer, it is instantly available. Harley claims a 0-60 time of four seconds flat. I wasn't wired to corroborate the claim, but my speedometer was calculating as quickly as Stephen Hawking as I got the LiveWire to its governed top speed of 92 miles per hour, with plenty of runway to spare.

The only sound from the bike was a slight whir that increased in pitch with speed. Harley custom designed the note to replicate a jet engine, but, to my ears, it sounds like the other two electric motorcycles that are currently duking it out in the market: Zero Motorcycles and Brammo. The "Loud Pipes Save Lives" Harley brigade is likely to have a tough time with LiveWire in this regard.

Compared to the existing electric motorcycles on the market, the LiveWire is similar in its responsiveness off the line to the 2014 models from Zero and Brammo, but it offers only half the range. Its motor and battery placement, dual ride modes and regenerative braking setup were clearly benchmarked, though the way Harley has chosen to disguise its powertrain is unique and probably the most attractive of the bunch. Even though this isn't a production bike, the LiveWire's fit and finish also far surpasses its rivals.

The "Loud Pipes Save Lives" Harley brigade is likely to have a tough time with LiveWire.

I've been testing electric motorcycles since 2000, and Harleys since 2000. I started with the Heritage Softail, a bike I rode with Hells Angels founder Sonny Barger. That relationship continued on to last year when Harley broke with its air-cooled tradition and introduced liquid cooling on some of its most popular models. Most recently, I've ridden its brand-new 2015 Street 750 – Harley's first all-new platform in 13 years.

The LiveWire doesn't just push Harley into the future with a bike whose character is radically different from anything else it's so far produced, it severs most ties to its past as the brand endeavors to reshape itself as a forward-thinking innovator instead of a trader in nostalgia.

In development since 2010, the LiveWire is designed to attract women, young adults, city folk and other brand-new non-riders to a marque that has long been dominated by male baby boomers. With the LiveWire, Harley has succeeded in making a bike so exceptionally easy to ride that even voluptuously petite Scarlett Johansson can do it. At least, that's how it will appear next summer in Avengers: Age of Ultron, which features the bike. 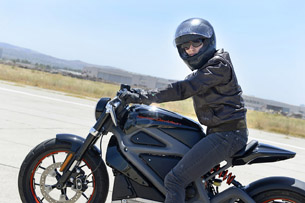 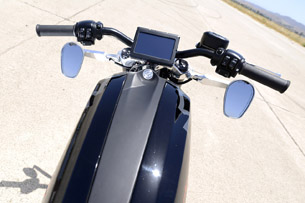 Left hand and foot are officially free from shifting duty, negating the need to coordinate all four appendages.

The typical Harley is a cruiser, characterized by a long wheelbase that keeps it stable in a straight line at speed but makes it more challenging to turn. The LiveWire is shorter, more nimble and significantly lighter weight, so, while it accelerates like a dragster, it corners more like a Japanese sport bike. Lacking an enormous engine, there's no vibration transmitting to the handlebars, nor is there any heat to sizzle riders' thighs.

The lack of a transmission or clutch makes riding easy. On the LiveWire, the left hand and foot are officially free from shifting duty, negating the need to coordinate all four appendages.

Slowing down involves the usual throttle roll off, but it's enhanced. Closing the throttle activates a battery recharge system that harnesses the kinetic energy from slowing. The feeling is similar to engine braking, except there isn't an engine. Nor is there a downshift. To slow down more quickly or stop, riders still need to brake, and the LiveWire is happy to oblige with smooth, quick-acting discs that would be just as at home on a Gixxer. 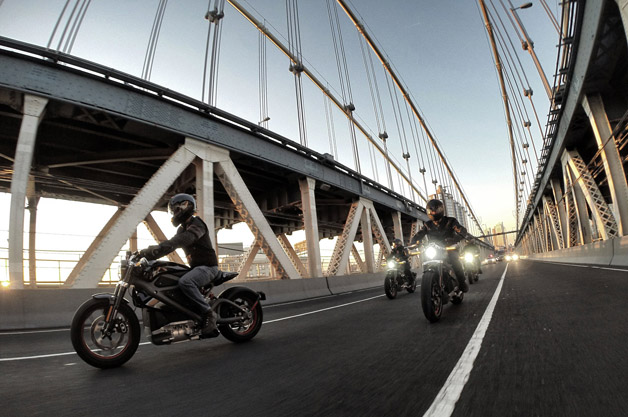 Because the LiveWire is a concept, not a production bike, Harley isn't providing complete specs for the bike nor giving members of the media full-length test rides. However, the company has let slip that the bike weighs around 360 pounds, less than half the gorilla-ish 800 pounds of a typical Harley. It takes about 3.5 hours to achieve a full battery using the company's Level 2 charger.

Starting this week, Harley-Davidson will set off on twin tours with small fleets of the LiveWire to solicit feedback and decide when or if it will even go into production. Licensed motorcycle riders can test the LiveWire for themselves during 20-minute demo rides at 30 Harley dealerships around the country, as the company has built at least 22 LiveWires to split between the East Coast and the West Coast. Check out ProjectLiveWire.com for a list of dates and dealers. Reservations are required, but they're worth it.