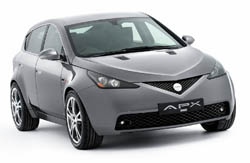 Lotus has been in limbo in recent years. After former CEO Dany Bahar revealed his plans to build six new models, its parent company was sold, Bahar was sacked, his plans were canceled and a new CEO was hired in the form of former Peugeot chief Jean-Marc Gales. The industry has been waiting ever since to find out what Gales would do with the storied marque, and now we seem to have some indication.

Reports coming in from Malaysia indicate that Jean-Marc presented to the board of parent company Proton a plan for Lotus to build a new sedan and crossover. Though details are scarce, and may seem downright blasphemous for an automaker that built is reputation on lightweight sports cars, it would not be the first time that the House that Colin Built has toyed with either idea.

The company presented the APX crossover concept at the 2006 Geneva Motor Show, and the Eterne sedan concept as part of Bahar's far-reaching plans at the 2010 Paris Motor Show. The new plans may use these concepts as starting points or could go another direction entirely.

Of course Lotus would not be the first sports car manufacturer to branch out into sedans and CUVs. Porsche has done both with great success. Lamborghini has presented concepts for both as well. And Maserati is well on its way to expanding its lineup with two new sedans already on the market and a crossover soon to follow. Aston Martin already offers a four-door and has toyed with the idea of a crossover as well, and even Bugatti has showcased sedan concepts, which would seem to leave dedicated supercar manufacturers like Ferrari and McLaren (not to mention the likes of Pagani and Koenigsegg) as the only holdouts that won't entertain the notion.