Plug In 2014: VIA makes the case for 'free' plug-in hybrid work vans, trucks

Who Makes More Money On Every Truck Sold, Chevy Or Chevron? If you're a fleet manager who's been waiting anxiously for the chance to buy a plug-in hybrid van from Via Motors, your wait is almost over. If you work for the right fleet, anyway.

David West, the chief marketing efficer for VIA Motors, took AutoblogGreen for a ride around the San Jose Convention Center in a Via van sporting an Electric Blue paint job as part of the Plug In 2014 Conference this week and gave us an update on how things are coming along. The big news is that the Via PHEV van production is going to start by the end of September. Via can currently build two vans an hour at its production plant in Mexico, or about 16 a day and could easily double that. "That would get us to 20,000 a year with two full lines running," West said. "We have the capacity."


"There is no way gas can compete with electric." – David West, Via Motors

But they can't sell that many quite yet. By the end of December, around 350 Vans will be made, mostly for a $20-million program from the Department of Energy (DOE) and the South Coast Air Quality Management District that will see the vehicles used by fleets that will report energy data to the Idaho National Lab. Via is also finishing up CARB certification for both the van and the company's plug-in hybrid pick-up truck. About 50 percent of Via's technology in the truck will not need to be tested again, since it's the same as what's in the van, but things like crash tests will need to be done twice.

Despite the progress, this is not where Via hoped it would be today. The bankruptcy of battery supplier A123, "took about a year off our timeline," West said. "It's been getting a little slow getting it to market, there have been some challenges, particuarly since we had the country's worst recession right in the middle of this wrap up, but it's inevitable in my mind. There is no way gas can compete with electric."

Maybe that's why FedEx has expressed an interest in buying around 5,000 units, West said. FedEx already has some pilot vehicles, just like Verizon does, and PG&E wants to replace all of their gas trucks with electric vehicles, which would be another 3,000 sales, he said. Besides the fuel savings, vehicles like these, with easy on-site power generation, could also work wonders in post-disaster situations, he said, since they could replace the need for generators. 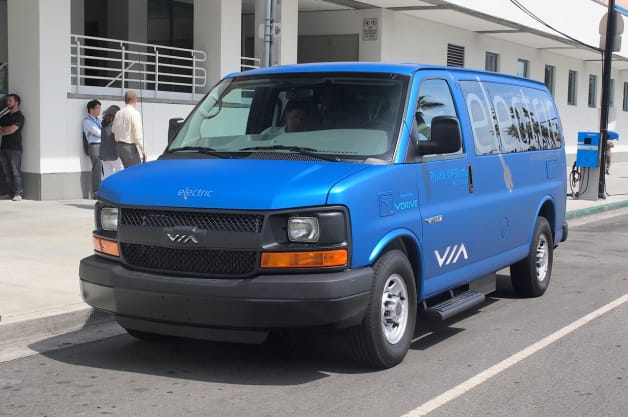 The DOE program will demonstrate the total cost of ownership for the vans and the empirical data, West said, will allow financing companies to make appropriate leases. "The thing that's interesting about EVs like this is that they're more expensive but they last longer," he said. "If that's the case, you should be able to get longer financing terms, which would drop your payments and would allow you, month by month, to make your payments out of your fuel savings. Once people discover they get 'free' vans, then it goes fast."


"Who makes more money on every truck sold, Chevy or Chevron?"

But before you can get a free van, though, you need to pay for the vehicle, and the Via PHEV costs around $80,000, before incentives. That may sound like a lot, but West said that a typical airport hotel using a Via van as a shuttle and putting on 15,000 miles a year would save enough in fuel costs to pay off the higher monthly payments. Really high-mileage users, people who drive 50,000 miles or more, would be getting the vehicle for 'free' thanks to increased fuel savings. "At 15,000 you go green for free, at 50,000 you get a free van," West said, and he drives a Chevy Volt at home and so knows the power of paying less for fuel in daily life. "Who makes more money on every truck sold, Chevy or Chevron?" he asked, rhetorically.

If a plug-in van is such a great idea, then why aren't GM and Ford selling them already, we hear you asking. West said he gets this question all the time. "The big companies have been a little bit slow because they had to place a big bet," he said. "We chipped that big bet into smaller parts. And if we do it in a smarter, less expensive, less risky way - which we're doing - and it works, then we have a partnership for GM which they love. They've already said they would like to buy us."

For now, though, Via is working alongside GM and has 30 GM dealers (all Volt dealers) signed up to sell the Via vehicles when they become available. Part of the way that Via is reducing risk for GM is because Via can build on order. If someone orders 2,000 vans, Via simply orders 2,000 vans from GM. The dream is to install the powertrains right inside the GM plant as the vehicles are being built, but in order to do that would take an order of 10,000 vans. That's still a ways away, so Via now buys vehicles from GM. At least the Via facility is located near the GM facility in San Luis Potosi, Mexico, so the logistical problem is minimized.

There are two ways that Via is thinking about expanding, once things are up and running. First is to sell directly to consumers, which West said Via will grow into, "in a year or two." Second would be to build Via products using a non-GM product. "We will entertain putting the powertrain into other vehicles, like the Ford F-150," West said, calling Via an independent powertrain supplier. To that end, Via has already put its technology into other vehicles, including one for an Asian automaker, but won't talk about the details. Guess we'll have to keep waiting.