View All Specs
What weighs 30,000 pounds? Big Ben's Westminster bell. A navy ship anchor. Or as we found out during our first drive program for the 2015 Ford F-Series Super Duty, seven pallets of cinder blocks loaded onto a dual-axle gooseneck trailer. The test was part of a raft of towing demonstrations that showcased the new Super Duty's impressive tug capacity, which maxes out at 32,100 pounds. That's 1,200 more than its nearest rival, the Ram 3500, when equipped with its upgraded 6.7-liter Power Stroke diesel V8. Such is the heavy-duty pickup truck business, a diesel-fueled game of one-upmanship with only three players: Ford, Chevrolet/ GMC and Ram. And in this game, the one with the most torque wins.

Until 2014, Ford was the one to beat, with its 6.7-liter Power Stroke diesel bringing 400 hp and a massive 800 lb-ft of torque to the table. Then last year, Ram did exactly that, serving Ford with a beefed-up Cummins turbodiesel inline-six in its freshened Ram Heavy Duty truck line with 385 hp and 850 lb-ft of torque, enabling it to tow up to 30,000 pounds. But Ford claims it had designed its engine to be relatively easy to upgrade when the time called for it, so for 2015, Ford bolted a larger turbo to the Power Stroke, bringing output to an insane 440 hp and 860 lb-ft of twist, all without reducing fuel efficiency. Maximum tow capacity rises from 24,700 lbs to an incredible 31,200 lbs for the F-450 dually.

As for GM's HDs? They lag behind the lot with their 6.6-liter Duramax V-8, producing 397 hp and 765 lb-ft of torque. Yeah, you know things are serious when the trucks with 765 lb-ft are the knock-kneed wimps of the lot.

Yet all this one-upmanship isn't as crystal-clear as the spec sheets would have you believe. Ford and Ram are currently involved in a pissing match over how these tow ratings are calculated, and the solution might not be arrived at without legal intervention. We prefer firsthand drive impressions over spec-sheet bench racing (towing?), so we headed to West Virginia to saddle up and ride. 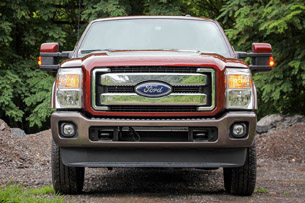 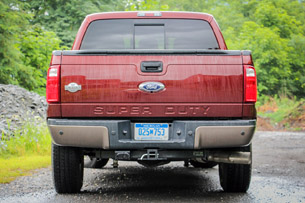 The diesel's power upgrade comes courtesy of a larger turbocharger.

If you're looking at the pictures, trying to sniff out what's new compared to the 2014 models, don't bother; nothing has changed on the outside, save for commercial-grade 19.5-in wheels on the F-450 and some new paint colors for the King Ranch versions.

Indeed, the Super Duty itself hasn't changed much since its last redesign back in 2010, and most of what we said back then about the interior styling and such still applies, too, except that now it looks even more dated. Back in 2013, the Super Duty received the MyFord Touch screen-based infotainment system in its Platinum model, and that system is now available in other trims. Furthermore, a nice new leather treatment has appeared inside the fancy King Ranch model for 2015. Otherwise, it's the same solid truck it was before, offering such niceties as power telescoping trailering mirrors, a backup camera, dash-top storage, a lockable storage area under the rear seat, a clever integrated tailgate step with assist post, and unlike the GM trucks, a good, on-center driving position.

So this is, more than anything, a diesel story (Ford didn't even bother bringing its gas-powered 6.2-liter V8 Super Duty, which gets by with a comparatively paltry 385 hp and 405 lb-ft of torque). The diesel's power upgrade comes courtesy of a larger turbocharger tucked into the valley of the reverse-flow SOHC 32-valve engine, as well as new fuel injectors. The increased airflow also allows for improved exhaust braking, which is achieved through backpressure in the turbo, and is now selectable via a button to the right of the steering column. What's more, the amount of exhaust braking can be reduced if desired by steeping lightly on the accelerator pedal, a neat trick that is unique to the Power Stroke, says Ford.

So does it work? Of course it does. It's got 860 pound feet of twist, fer cryin' out loud. Ford structured a number of towing tests, including the aforementioned F-450 towing test, and similar tests for the three-quarter and one-ton models, each loaded up to its trailering max, or very close to it, and sent us on our way along a very steep, 4.6-mile grade with a 1,420-foot elevation change to see if they would perform as promised. Not surprisingly, the Fords did quite well, maintaining highway speeds better than identically burdened Chevrolet Silverado and Ram HD models, which huffed and puffed and lost more speed during ascent. The Ford's six-speed TorqShift transmission with manual gear selection on the gooseneck shifter and upper gear lockout likewise proved less prone to gear-hunt than the others.

Unfortunately for the Blue Oval, the back-to-back comparisons also gave us a chance to appreciate the differences in cabin comfort and sense of interior quality among the three, and in this respect, the Ford feels ergonomically outdated and far more plasticky, despite offering a competitive suite of technologies. That said, in terms of seat comfort, the trophy goes to the F-Series, hands down.

Ford also allowed us to drive untethered F-250 4X4 models, one laden with 1000 pounds in back, and another empty. Two surprises here: 1) Regardless of payload (which admittedly was less than a third of those particular models' 3,250-lb payload max) we could feel virtually no difference between the two in terms of handling and braking; and 2) Both proved eminently drivable. Certainly, with that much torque heading to the rear wheels, some wheelspin is inevitable when hammering the throttle from a dead start, but we had to work a bit harder than we expected to in order to make that happen – that's a good thing. This isn't a Mustang, after all, and when it comes to three-ton-plus trucks, grip is more important than tire smoke.

The luxury rigs we sampled averaged about $70K, which might surprise the average car shopper, but won't alarm the towing/hauling crowd.

At speed, the unladed ride quality is also decent – at least in F-250 form – with less shivering and quaking over rough pavement and good body control in corners. Steering is direct, if slow, and feel through both the steering and brakes is pretty much nil, but that's to be expected in this class of vehicle. The emphases for heavy-duty trucks is and should be on stability and predictability, and the F-250 exhibits both, even from a seating position well above standing height if you're not Kareem Abdul Jabbar.

Prices for the 2015 Super Duty starts at $32,240, though the cheapest model with the Power Stroke is the base $40,720 XL grade. Most of the cushy King Ranch and Platinum-grade rigs we sampled averaged about $70K, which might surprise the average car shopper, but won't alarm the towing/hauling crowd. Besides, if that seems steep, just think about it from a torque-per-dollar standpoint, and it seems like a damn bargain. 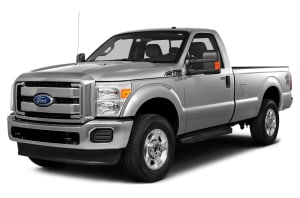