Qualifying for the British Formula One Grand Prix was just as much a surprise for fans as it was for teams. Certain team weather radar displays didn't accurately pinpoint storm systems over the track, and in the case of at least two teams, the lack of data was compounded by poor decision making. That's how both Ferraris and both Williams got kicked out of qualifying in Q3 – the drivers already on track took advantage of a dry spell between rains, but Ferrari and Williams waited too long to get back out, and by the time they did it had started raining again.

Rain-induced bewilderment hit the front of the field as well. When all appeared resolved in Q3 but the clock hadn't yet run down to zero, drivers including Lewis Hamilton and Daniel Ricciardo pulled into the pits thinking the day was done. However, a drying last sector of the Silverstone circuit meant the drivers still out could suddenly improve their times by four seconds in just that sector. When the bell tolled, those who fought to the last were those who lined up first: Nico Rosberg in the first Mercedes AMG Petronas, Sebastian Vettel in the first Infiniti Red Bull Racing, Jenson Button in the McLaren, Nico Hülkenberg in the first Force India and Kevin Magnussen in the second McLaren.

Hamilton had fallen all the way to sixth on the grid, a mortifying blow to his race and his championship challenge. He was followed by Sergio Perez in the second Force India, Ricciardo in the second Infiniti Red Bull Racing, Toro Rosso teammates Daniil Kvyat and Jean-Eric Vergne completing the top ten.

When the green lights went out, the weather stayed bright, but ill winds blew on track for some. 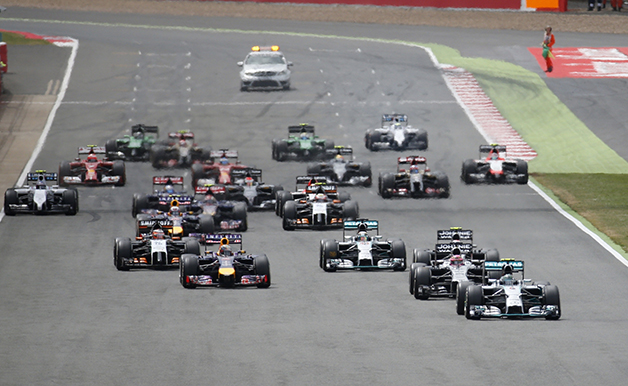 Starting with Kimi Räikkönen, who started 20th. On the first lap, the Finn ran wide at Aintree headed onto the Wellington Straight, hit a curb as he rejoined the track and lost the car, his Ferrari leaving the track and spearing into the barriers on the right side, then bouncing across the track and colliding with Felipe Massa before coming to rest in the barriers on the left side. Ferrari said Räikkönen's first impact registered 47 G – the medical light in the car comes on at 25 G. Helped from the car, he limped off to the medical center and is said to be all right save for some sore ankles and bruising on his knee. 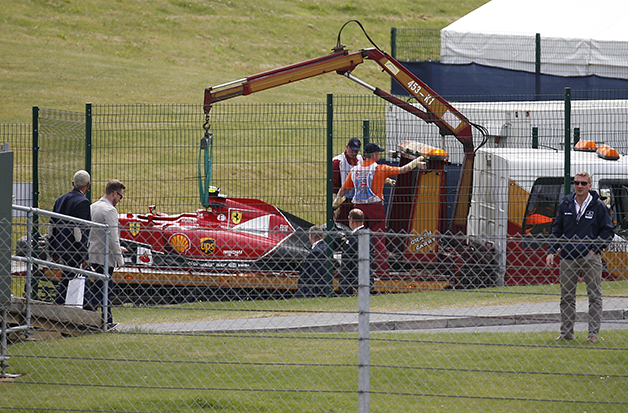 Stewards red flagged the race on Lap 2 for almost an hour to fix the barriers on the straight. When the race restarted behind the Safety Car, the front ten looked different: Rosberg, Button, Magnussen, Hamilton, Vettel, Hülkenberg, Ricciardo, Kvyat, Bottas – all the way up from 17th and Bianchi.

The race at the front was to see how long it would take Hamilton to get past Magnussen and Button, which he'd done by Lap 4. At that point he was five second behind Rosberg, but both Mercedes were putting around 2.5 seconds per lap into the rest of the field. 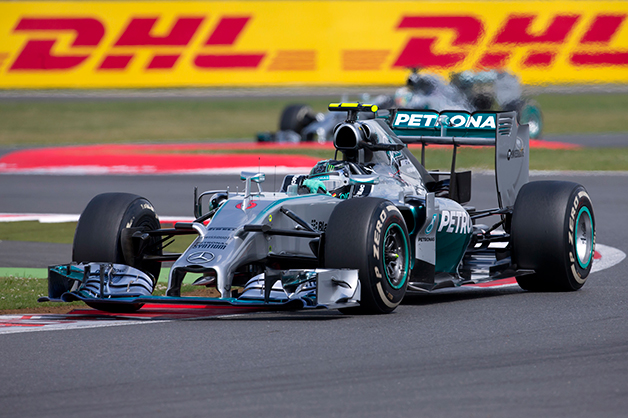 Rosberg hit the pits first and grabbed a set of medium tires, Hamilton – whose stop again took longer than Rosberg's – grabbed a set of hard tires. Everyone thought the hard tires were the slower of the two, but Hamilton immediately set the fastest lap of the race, a second faster than Rosberg's previous best. We don't know how much this had to do with it, but Rosberg later admitted he began having gearbox problems just after his first stop, and they worsened to the point that on Lap 29 of the 52-lap race he had to retire. Rosberg's first DNF of the year put Hamilton in the lead, 31 seconds ahead of second place, and he'd cruise to victory. 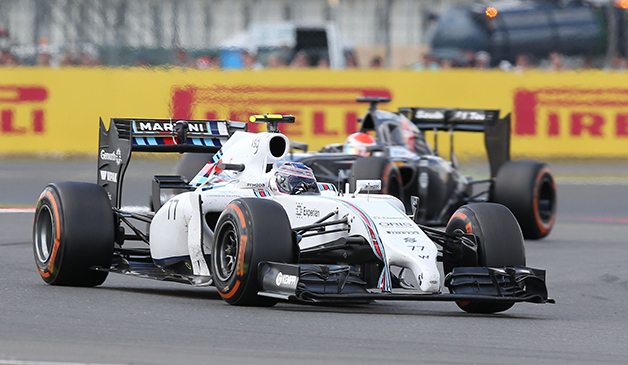 Williams proved Austria wasn't a fluke and that its woeful weekend so far had obscured true pace. Massa got taken out of his 200th grand prix in the Räikkönen incident, but Bottas carved up the field to claim third place by Lap 23, when Rosberg retired he took second and it was clear no one was going to overtake him for it. After finishing third in Austria two weeks ago, the other Finn took one step higher on the podium in England.

Ricciardo overcame his qualifying error with an impromptu one-stop strategy when he realized his medium tires could last longer than planned. By staying out, he dragged himself into third place, but cut it close: Button ate into his lead by around a second per lap over the last 12 laps of the race, and was only eight-tenths of a second behind at the checkered flag. Had the race gone one more lap, Ricciardo would have lost his podium to the Brit with the pink helmet. 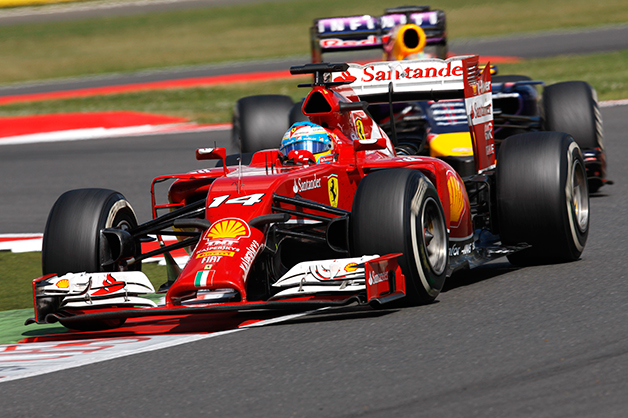 Vettel and Fernando Alonso claimed the next two positions a laps-long, millimeter-close duel between the current and former world champion that could have been called, as the English say, The Battle of the Dueling Whingers. Alonso – who started 19th and took a five-second penalty for lining up outside his grid box – made a brilliant pass on Vettel on Lap 34 to take fifth place. The two fought for the next fourteen laps, Vettel trying to make a move stick through the last complex of corners at Vale and Club then onto the main straight, Alonso always ducking to the inside and forcefully closing the door. Lap after lap, each driver complained about the other one running wide at Copse, which the stewards had already warned all drivers about, Vettel additionally angry about Alonso tactics that he felt forced him to lift off in order to avoid a crash, Alonso accusing Vettel of illegal use of his DRS. The stewards let them race, and Vettel finally made a pass stick on Lap 48. Magnussen, Hülkenberg, Vergne and Kvyat rounded out the rest of a quiet top ten. 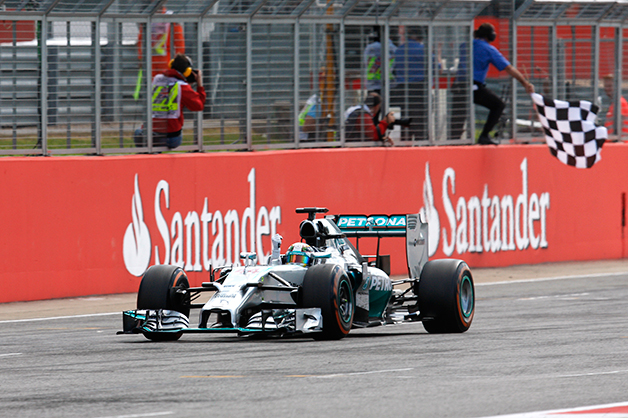 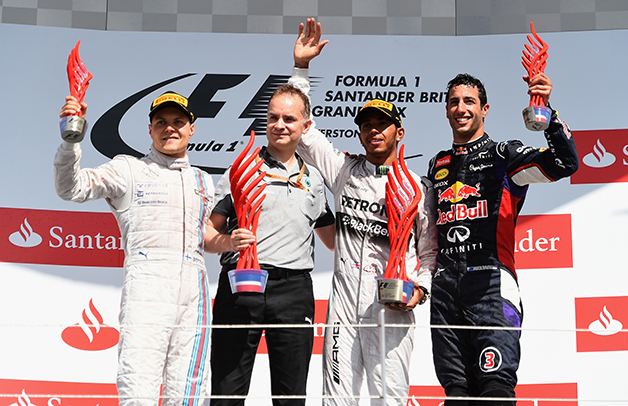 Mercedes maintained its magnificent lead in the Constructor's Championship, 326 points to 168 for Infiniti Red Bull Racing. Ferrari with 106 points lost ground to Williams with 103, and Force India with 91 points lost ground to McLaren with 90. They'll all have two more chances to rectify their errors at Germany and Hungary before the Summer break. We'll see you in two weeks.