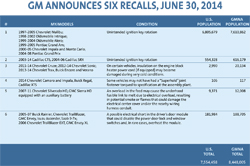 General Motors today announced a truly massive recall covering some 8.4 million vehicles in North America. Most significantly, 8.2 million examples of the affected vehicles are being called back due to "unintended ignition key rotation," though GM spokesperson Alan Adler tells Autoblog that this issue is not like the infamous Chevy Cobalt ignition switch fiasco.

For the sake of perspective, translated to US population, this total recall figure would equal a car for each resident of New Hampshire, Rhode Island, Montana, Delaware, South Dakota, Alaska, North Dakota, the District of Columbia, Vermont and Wyoming. Combined. Here's how it all breaks down:

The solution won't be a new ignition switch at all, it will be sending additional detachable key rings to owners (allowing drivers to disconnect their car key from the rest of their key chain to reduce strain on the system) and/or inserts designed to fit within the ignition key head itself to alter the keyring attachment loop from a slot to a hole (because the slot can cause the weight of the keychain to hang asymmetrically, thereby increasing the amount of torque on the key and as a result, the switch.

Company spokesperson Alan Adler, tells Autoblog that GM "changed the [key] design in late December of 2010," so vehicles built after that time are not affected by the issue.

GM is aware of seven crashes, eight injuries and three fatalities related to these issues. "The fatal crashes occurred in older model fullsize sedans being recalled for inadvertent ignition key rotation. There is no conclusive evidence that the defect condition caused those crashes," GM said in a press release. Scroll down to read the automaker's full statement.

DETROIT – General Motors announced today it will conduct six new safety recalls in the United States involving about 7.6 million vehicles from the 1997 to 2014 model years.

"We undertook what I believe is the most comprehensive safety review in the history of our company because nothing is more important than the safety of our customers," said GM CEO Mary Barra. "Our customers deserve more than we delivered in these vehicles. That has hardened my resolve to set a new industry standard for vehicle safety, quality and excellence."

Among these recalled vehicles, GM is aware of seven crashes, eight injuries and three fatalities. The fatal crashes occurred in older model full-size sedans being recalled for inadvertent ignition key rotation. There is no conclusive evidence that the defect condition caused those crashes.

"We have worked aggressively to identify and address the major outstanding issues that could impact the safety of our customers," Barra said. "If any other issues come to our attention, we will act appropriately and without hesitation."

GM has made changes to every process that affects the safety of its vehicles, and the company has acted or will act on all 90 of the recommendations put forward by former U.S. Attorney Anton Valukas in his independent report to the company's Board of Directors.

GM expects to take a charge of up to approximately $1.2 billion in the second quarter for the cost of recall-related repairs announced in the quarter. This amount includes a previously disclosed $700 million charge for recalls already announced during the quarter.

Until the ignition recall repairs have been performed, it is very important that customers remove all items from their key ring, leaving only the vehicle key, and always use their seat belts. The key fob, if present, should also be removed from the key ring.

General Motors Co. (NYSE:GM, TSX: GMM) and its partners produce vehicles in 30 countries, and the company has leadership positions in the world's largest and fastest-growing automotive markets. GM, its subsidiaries and joint venture entities sell vehicles under the Chevrolet, Cadillac, Baojun, Buick, GMC, Holden, Jiefang, Opel, Vauxhall and Wuling brands. More information on the company and its subsidiaries, including OnStar, a global leader in vehicle safety, security and information services, can be found at http://www.gm.com
X