The era of the body-on-frame, fullsize SUV is rapidly vanishing in favor of smaller, unibody crossovers. However, Ford still sees life in the segment with the reveal of the updated 2015 Expedition, now available (solely) with the company's 3.5-liter EcoBoost V6. The new truck will make its public debut at the 2014 DFW Auto Show in Dallas on February 19.

The loss of the previous 5.4-liter V8 in favor of Ford's 3.5-liter, direct-injected, twin-turbocharged V6 engine might rankle some of the Expedition's fans, but Ford claims that the change gives the SUV better fuel economy, more power and increased low-end torque than before. Unfortunately, official engine specifications won't be released until later this year, but Ford says engine output will be similar to the 365 horsepower and 420 pound-feet of torque that this powerplant produces in other applications. The EcoBoost is mated to a six-speed automatic transmission, and the SUV now uses electrically assisted power steering, for an even greater fuel economy advantage. Ford claims this also allows for better maneuverability at low speeds and better feel at high speeds.

Exterior styling is basically unchanged for 2015. The front end has a new, three-bar grille (the old one had four bars) and headlight design, but the lower air dam gets added chrome and LED lamps. The rear gets more brightwork on the hatch, and there's a chrome-tipped exhaust pipe. As before, Ford is offering the Expedition in two wheelbase lengths – 119 inches and 131 inches. A new, optional, continuously controlled damping system alters suspension settings constantly based on 46 parameters and offers comfort, normal and sport modes (just like the Expedition's sister, the recently refreshed and decidedly less-attractive Lincoln Navigator). 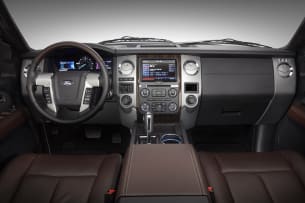 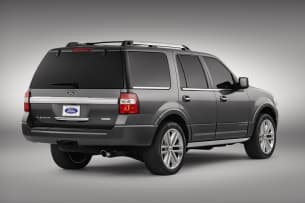 While interior volumes are unchanged for 2015, the the instrument panel is revamped with two new 4.2-inch LCD screens between the central speedometer. MyFord Touch-equipped models also get a new, eight-inch touchscreen. The Expedition also gets new tech goodies like blind-spot alert, cross-traffic alert, push-button start, a rearview camera and apps for the infotainment system to help with towing and off-road driving. A new, luxury-oriented Platinum trim level makes many of these features standard, and offers a choice of dark red leather seats or black leather with gray accents.

The 2015 Expedition will enter production at the company's Kentucky Truck Plant in Louisville later this year, and Ford will add XLT, Limited and King Ranch trim levels later. While the technological improvements will certainly be welcome, will the traditional buyers of the Expedition be willing to accept turbocharged V6 power? We will be able to answer that better when Ford releases official specs and fuel economy figures. If they're anything like current F-150 buyers, we certainly think so. Scroll down for the full details in Ford's press release.

UPDATE: A previous version of this story said the 2015 Expedition will use the same three-bar grille as before. The old model used a four-bar grille, so the three-bar setup is brand new. Additionally, regarding horsepower, we originally reported that the new Expedition's EcoBoost V6 will be tuned to produce something like 365 horsepower and 360 pound-feet of torque. While official specs still have not been released, the torque number should actually be something along the lines of 420, which is what's produced in the current Ford F-150 EcoBoost.
Show full PR text
Ford Reveals 2015 Expedition with EcoBoost Engine, Advanced Technology, New Platinum Series

Expedition now features Ford F-Series' popular 3.5-liter EcoBoost® engine, more technology than ever and a fresh new look. Launching later this year, it is the latest Ford nameplate to offer a Platinum series. Expedition is being shown for the first time in Texas, Ford's largest market by sales volume, and home to the top two cities for Expedition sales – Dallas and Houston.

Expedition remains the only full-size utility vehicle not classified as a luxury offering to feature an independent rear suspension. This helps deliver more confident ride and handling characteristics, and allows for the lower, more convenient fold-flat third-row bench seat.

Both standard and EL versions of Expedition are built at Kentucky Truck Plant in Louisville, alongside Ford's popular Super Duty pickup. Last month, the company confirmed plans to add more workers and invest an additional $80 million in facility upgrades to improve automation and increase capacity at the plant.

"This new Expedition is proof Ford is committed to remaining the leader in utilities – small, medium and large," said Jackie DiMarco, Expedition chief engineer. "We listened to our customers and created a full-size utility vehicle that doesn't compromise in performance, technology or design."

Improved on the road

From the outset, engineers worked to make the 2015 Expedition a technologically advanced vehicle that is easy to drive and offers refinement for all types of drivers.

"Expedition becoming the latest Ford utility vehicle to wear the EcoBoost badge will be exciting for customers," said Doug Scott, Ford truck group marketing manager. "Increased torque and horsepower, combined with new levels of efficiency and an advanced suspension not only will make Expedition more fun to drive, but also easier to own. This is another 'and' solution from Ford."

The 3.5-liter EcoBoost will be the only engine offered in the new Expedition in North America. To maximize performance and control, the vehicle is equipped with a six-speed SelectShift® automatic transmission featuring a manual mode that allows the driver to use a shift-mounted rocker switch to select the desired gear.

With EcoBoost now standard equipment across the 2015 Expedition range, the entire U.S. lineup of Ford utility vehicles will be available with EcoBoost power by the end of 2014.

New continuously controlled damping, available for the first time on a Ford nameplate, will make Expedition the only Blue Oval-branded vehicle in the United States with three selectable drive modes – comfort, normal and sport.

Using a suite of sensors that detect 46 unique body, steering and braking inputs, the advanced suspension monitors body motion and then adjusts Expedition's damping system in milliseconds to manage the vehicle's natural body motion. A vehicle with poor damping feels as if it is bouncing on its suspension springs; continuously controlled damping recognizes the weight of the vehicle, steering feedback and road undulations and then reacts accordingly, helping to control body motion so passengers experience an orderly, comfortable ride.

The new Expedition pushes full-size utility vehicle design to a higher level, with fresh interior and exterior styling and a diverse series lineup – each with a distinct look and feel to give customers more choice than ever. A Platinum trim package, which has been very successful on Ford F-Series, will be available on Expedition for the first time.

"The Platinum series brings Expedition into a whole new arena of design and style," said Scott. "One of the strengths of Expedition has always been the different trim series we offer. From XLT to Limited and now with Platinum, we have an Expedition that will fit any customer's needs."

The Platinum series is tailored with lush leather seating described by designers as buttery – soft and smooth to the touch. It's available in a new Brunello leather, a red wine color with tuxedo- stripe accents and French-seamed stitching. Platinum customers can also choose black leather with Agate Gray accents.

Beyond the new Platinum series, the 2015 Expedition lineup includes the XLT, Limited and a new King Ranch edition to be revealed later.

The design team, finding inspiration in the world around them, incorporated different themes to define the look for each series. The intent was to reflect a consumer lifestyle, from the sporty XLT, to the confident, elegant Limited, to the sophisticated, urban Platinum. Each series has unique finishes specially selected to reflect the lifestyle and desires of the customer. For example, Expedition Limited features refined yet traditional finishes, while for the Platinum edition, the colors and material finishes are fresh and sophisticated.

The Expedition exterior has been updated with an all-new front end featuring available LED fog lamps for a fresh, aggressive look.

An all-new wheel lineup including factory-installed 22-inch models, a redesigned rear hatch and subtle, chrome-tipped exhaust pipes round out the exterior changes to the 2015 Expedition.

With this new model debuting at the DFW Auto Show – deep in the heart of the full-size utility vehicle market – Ford is building on a successful tradition of Expedition capability and quality with significant improvements in design, performance, efficiency and available technology.

About Ford Motor Company
Ford Motor Company, a global automotive industry leader based in Dearborn, Mich., manufactures or distributes automobiles across six continents. With about 181,000 employees and 65 plants worldwide, the company's automotive brands include Ford and Lincoln. The company provides financial services through Ford Motor Credit Company. For more information regarding Ford and its products worldwide, please visit http://corporate.ford.com. 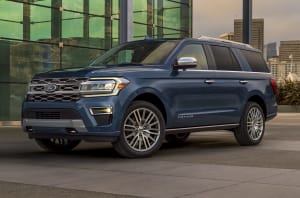 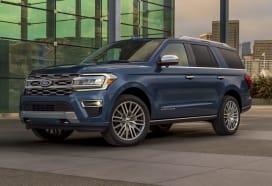